Kim Zolciak proudly showed off her new lipstick collection in a new photo with her look-alike daughters Brielle and Ariana on Instagram Wednesday.

The 41-year-old reality star looked sultry as she posed and pouted next to her girls, who 22 and 17.

But while she was happy to embrace glamour with her older ladies, Kim spent the day prior hitting back at critics who slammed her for letting her youngest daughter, five-year-old Kaia, wear a full face of makeup. 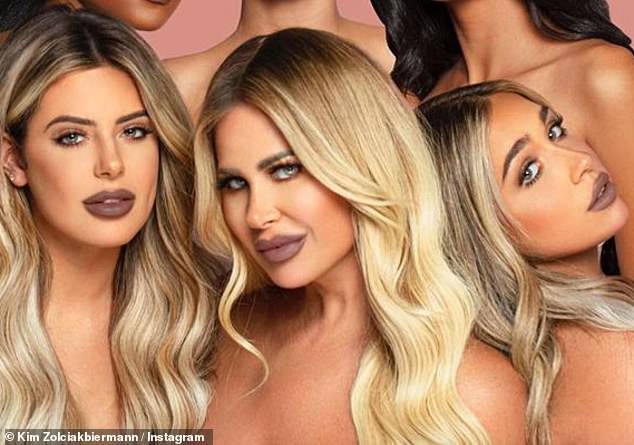 Seeing triple: Kim Zolciak and her look-alike daughters Brielle (left) and Ariana (right) went for over-the-top glamour as they pouted it up in a new Instagram promoting mom’s latest lipstick collection 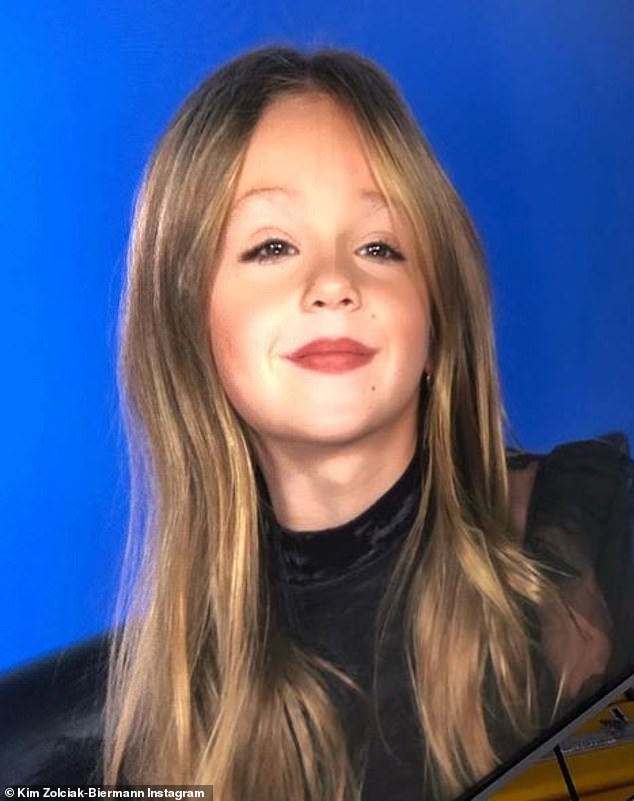 Too young? Mom’s post with Brielle and Ariana came just days after she was slammed for posting a photo of five-year-old daughter Kaia where she appeared to be in full makeup

Kim and kompany looked lush as they modeled a deep brown shade from the Don’t Be Tardy persona’s In The Nude lipstick collection.

Her daughters were the spitting image of mom, all rocking long blonde waves which strategically covered their bodies to make it appear like they were going au naturel.

Behind the trio of blondes stood a more diverse group of models, also rocking the color, which was given the suggestive name Double D’s.

She later deleted the post for unknown reasons, replacing it with a different set of pictures promoting her line.

Kim had no problem getting dolled up with her older daughters.

But she faced major backlash after posting a photo of her five-year-old daughter Kaia Rose where she appeared to be wearing a full face of makeup days before.

Critics and fans sounded off in the comments, wondering why the Real Housewives Of Atlanta personality would let her little girl slather on the cosmetics. 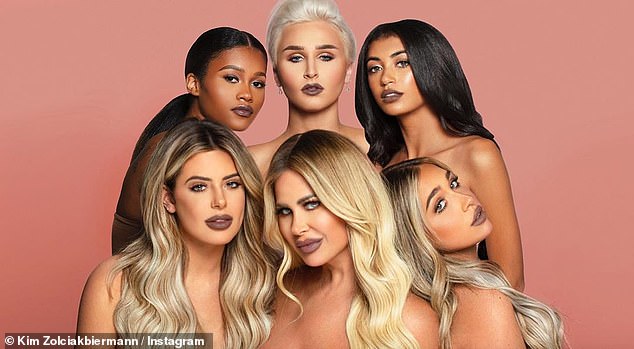 Model behavior: Behind the trio of blondes stood a more diverse group of models, also rocking the color, which was given the suggestive name Double D’s 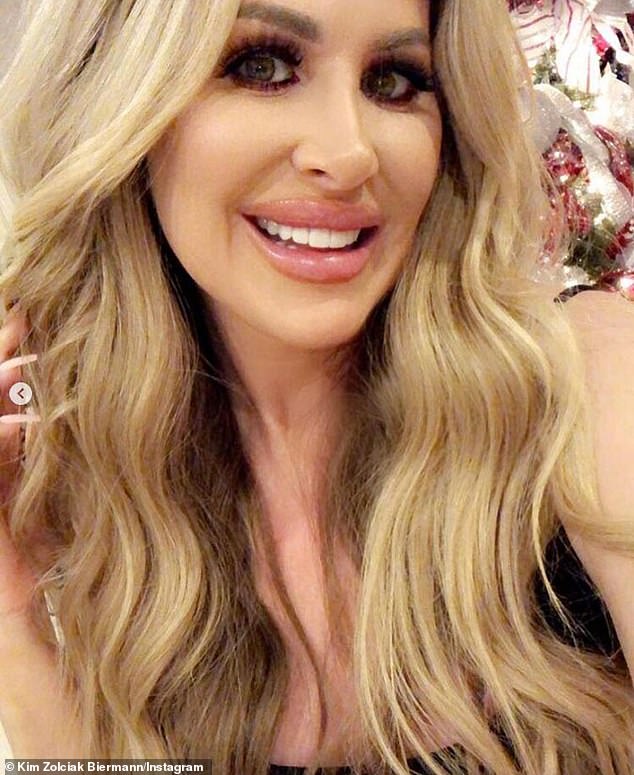 Denial: The reality star, 41, was sure to defend herself from the mom-shaming’ with a series of sassy replies where she insisted her daughter was not wearing any makeup at all

But the reality star was sure to defend herself from the mom-shaming’ with a series of sassy replies where she insisted her daughter was not wearing any makeup at all.

The photo started innocently enough as Kim celebrated Kaia’s fifth birthday with a caption that read: ‘Picture of the screen ❤️ where does the time go �� @kaiabiermann how are you 5 already? #DontBeTardy.’

The accompanying picture, which appeared to be a still from an interview for the family reality show Don’t Be Tardy, showed the little one wearing a bold lip color and what appeared to be dark eyeliner or perhaps false lashes. Her fair eyebrows also looked like they may have been tweezed.

People instantly took to the comments, asking Kim – who owns her own makeup line – why she thought it was necessary to doll up her already adorable little girl.

‘She’s gorgeous. But why is she wearing a bright red lipstick? I don’t eve wear lipstick that bright,’ one Instagrammer wrote. 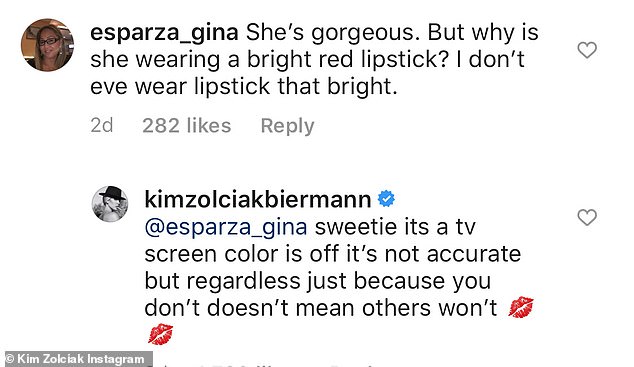 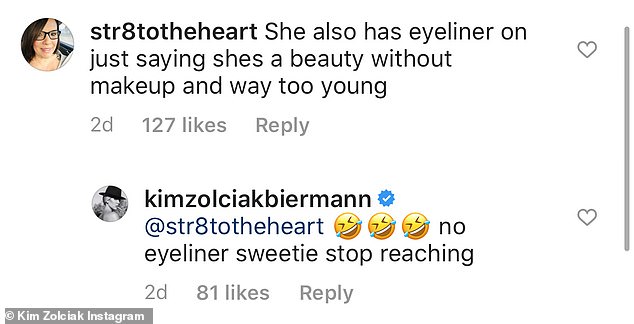 Kim claimed that it was simply an over saturated TV screen making Kaia look so dramatic, replying: ‘Sweetie its a tv screen color is off it’s not accurate but regardless just because you don’t doesn’t mean others won’t.’

Another said: ‘She also has eyeliner on just saying shes a beauty without makeup and way too young.’

Yet another part of the peanut gallery wondered: ‘Makeup and hair extensions. Really??’

The mother of six was truly tickled by that accusation, responding: ‘hair extension now that’s funny!’ 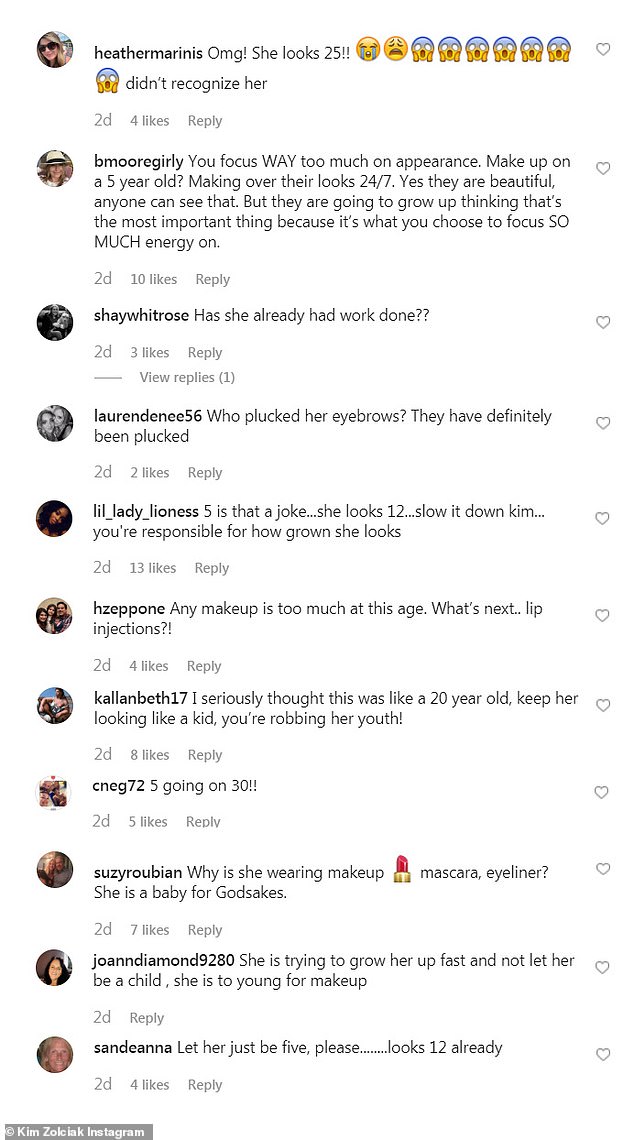 Peanut gallery: Plenty of people sounded off in the comment

Claims: Last year Kim was accused of Photoshopping a snapshot of Kaia, changing the shape of both her nose and her body

This is far from the first time the wife of retired football player Kroy has been criticized for her parenting strategies.

Almost a year ago exactly, she was slammed for allegedly Photoshopping Kaia’s body to look more mature after her daughter Brielle, 22, shared her own undoctored version of the picture.

‘This is sick! Kim Zolciak Biermann photoshopped her 4 year old daughter to make her butt look bigger and her nose to look smaller! [sic]’ the Instagram account thegoodthebadandthefake pointed out.

Last year she was also accused of photoshopping a childhood picture of Ariana to make her lips look larger. 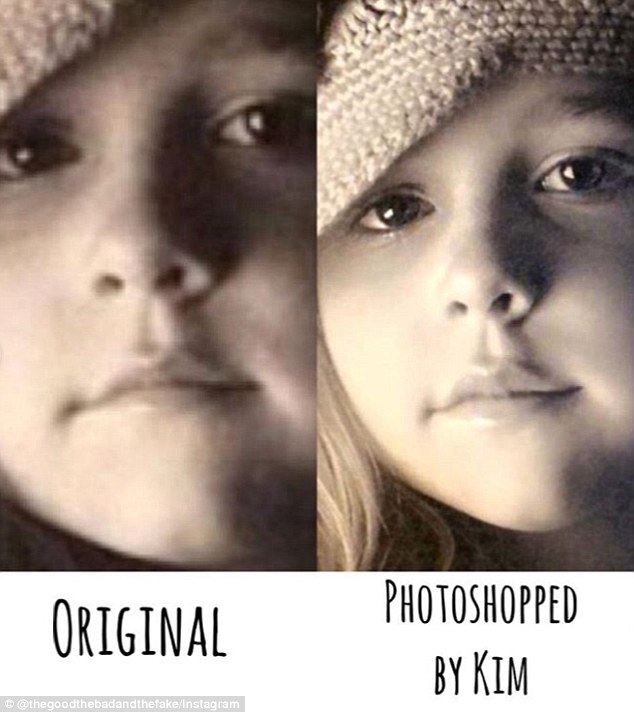