CandyGate continues! Kim Kardashian chides Kourtney for serving sugary treats at Poosh party… after they fought over sweets at North and Penelope’s birthday

Kourtney Kardashian held a Poosh event at her Calabasas mansion on Monday evening where she screened the movie Like A Boss starring Tiffany Haddish, Salma Hayek and Rose Byrne.

And during the splashy event the 40-year-old web editor served different kinds of candy, including chocolate chips and what appeared to be M&Ms. Kim took note of the sugary offerings during an Instagram video shared by Khloe Kardashian. 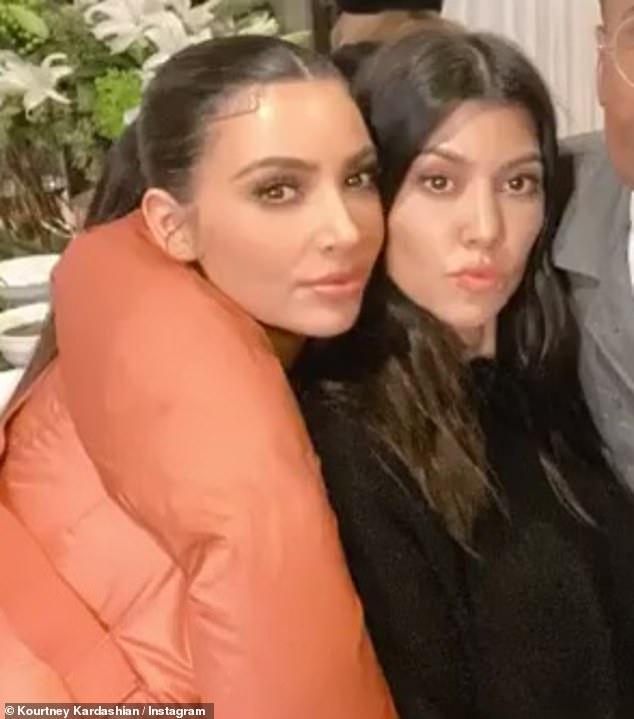 Still posing together: Things have been tense between Kim and Kourtney Kartdashian but they were seen together on Monday evening

‘Well at least it’s plastic free,’ added Kim as the goodies were served on wood plates.

The treats were provided by Sugar Factory New York, as Kourtney pointed out on social media.

Kim was shocked to see the table full of candies after she got into a heated argument with Kourtney over Penelope and North’s CandyLand themed joint birthday party this summer. The argument was shared on an episode from this season of Keeping Up With The Kardashians. 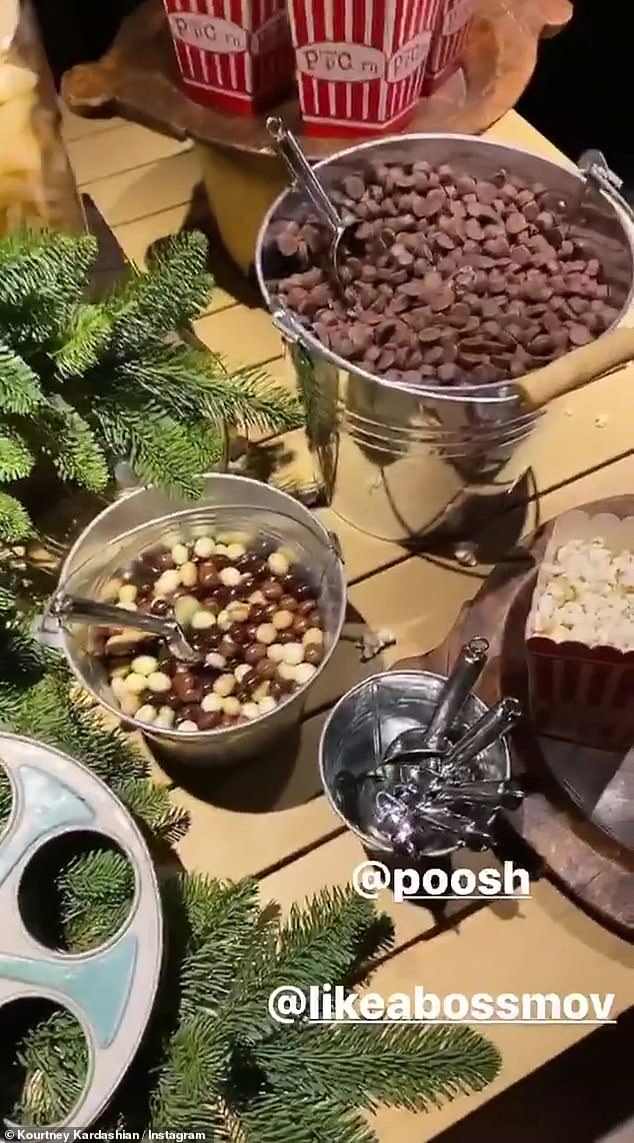 Shocked: Kourtney threw a Poosh event at her home and Kim was shocked that the star had a full candy bar 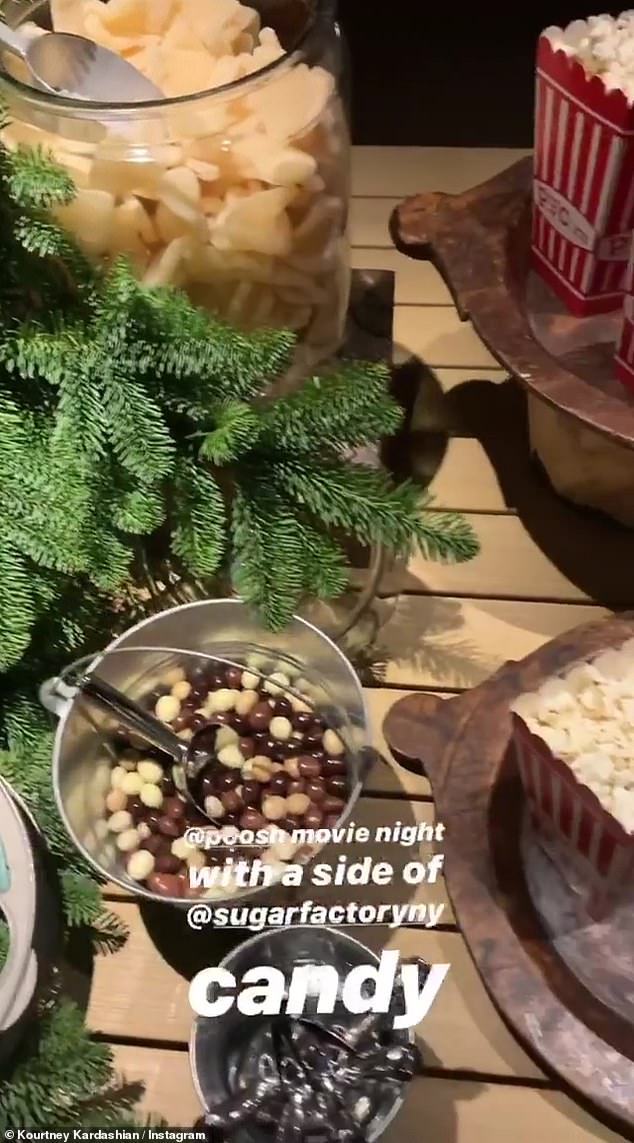 Not sugar free: There seemed to be a big bucket of brown, beige and white M&Ms 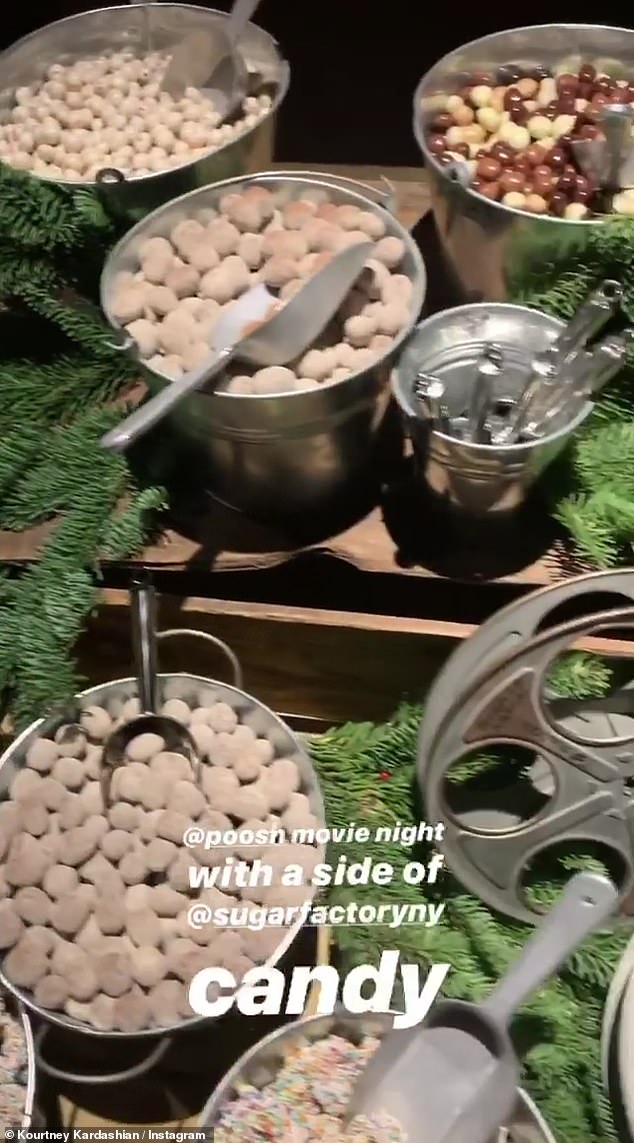 So much sugar everywhere: The treats were provided by Sugar Factory New York 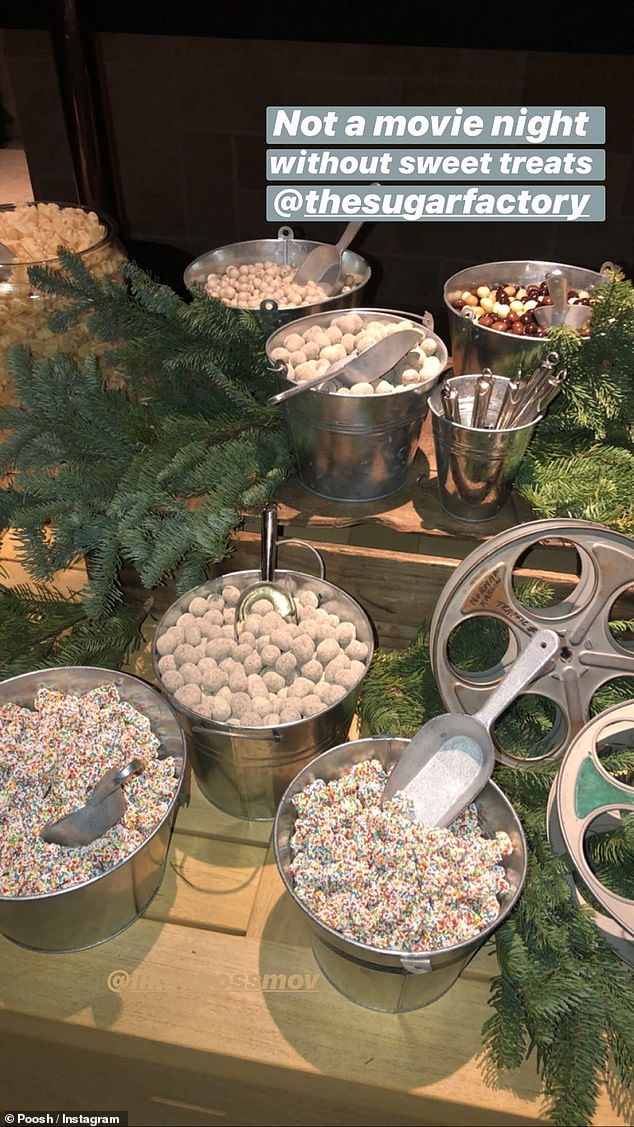 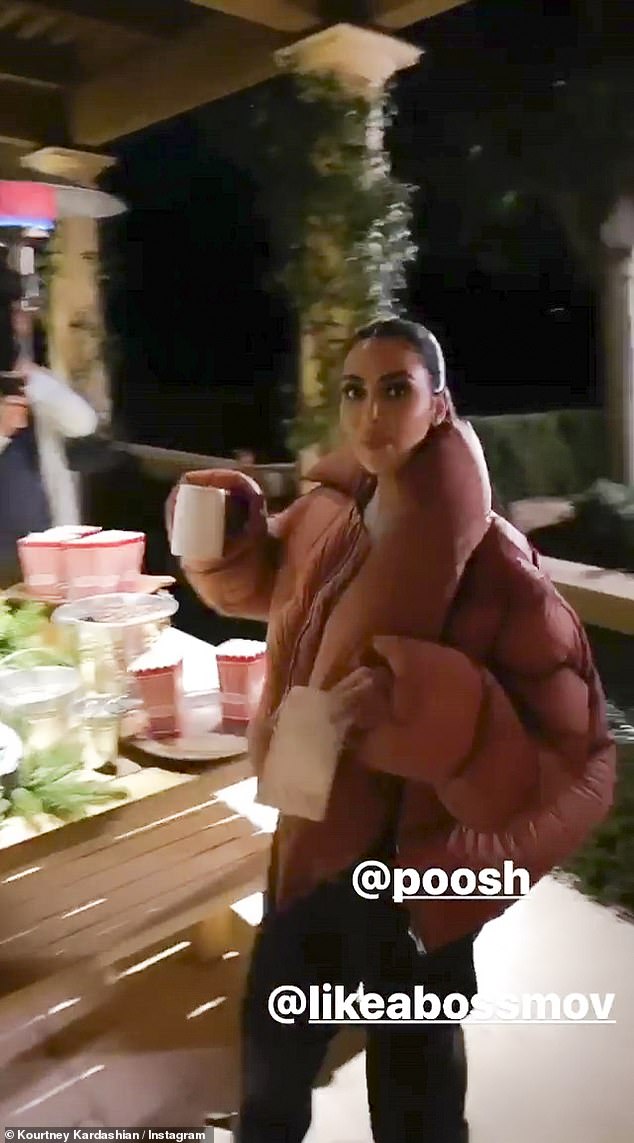 She was put off: Kim took a long look at the candy table as she held on to a mug and a bag 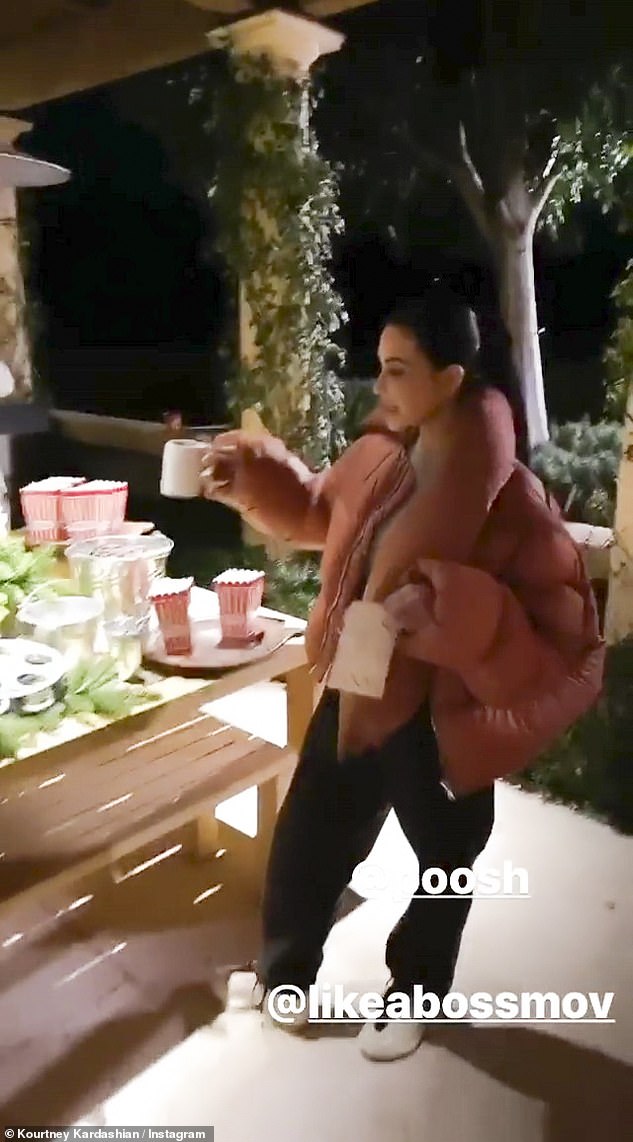 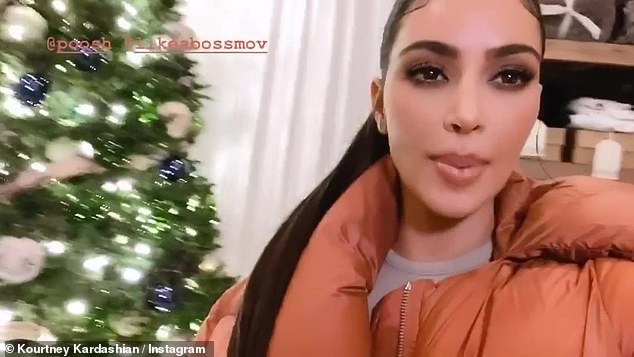 All done up: And the siren also was seen in close up with heavy brown eye shadow on

Kourtney did not want regular candy with all its dyes and artificial sugars served at the event.

But Kim thought it was necessary to have popular candy like Skittles as it went with the CandyLand theme.

‘It’s not going to be healthy no matter what, sugar’s not healthy, but let’s not do the nasty stuff with food coloring and gross sh*t,’ said Kourtney. 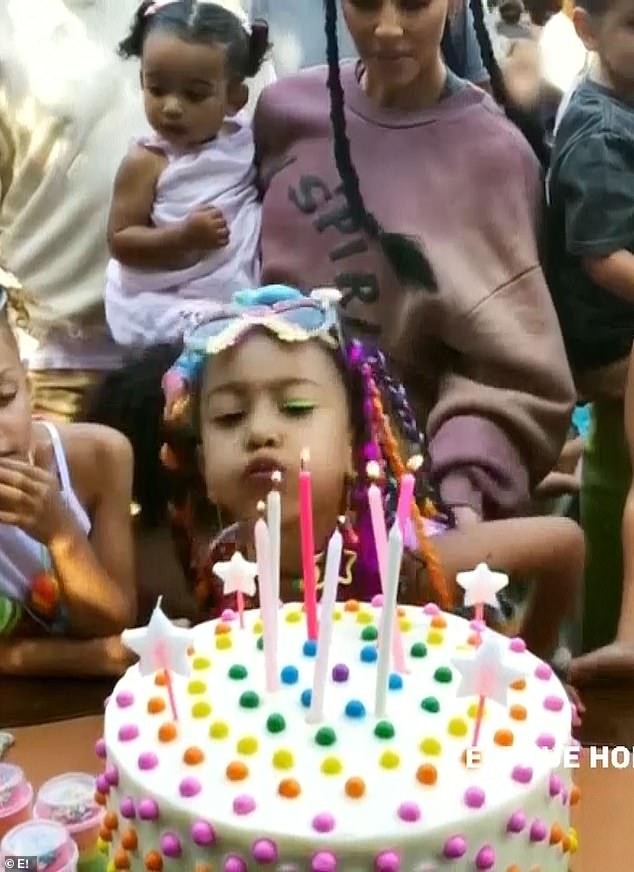 Does Kourt forget about THIS? Kim was shocked to see the table full of candies after she got into a heated argument with Kourtney over Penelope and North’s CandyLand themed joint birthday party this summer 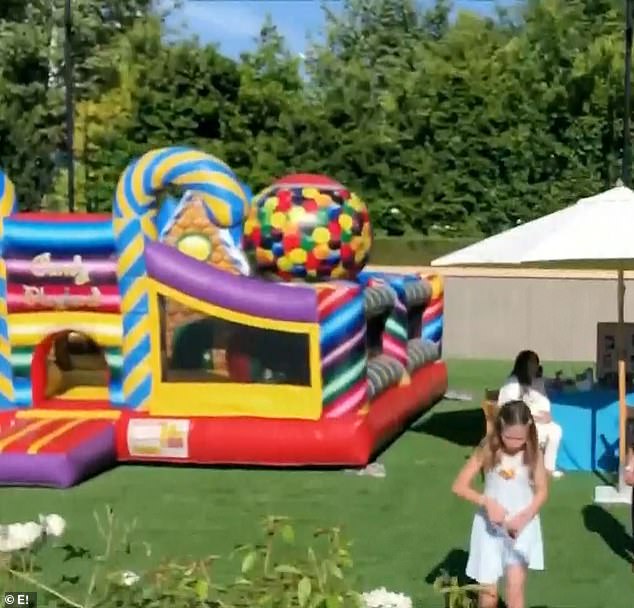 Drama: Kourtney did not want regular candy with all its dyes and artificial sugars served at the event. But Kim thought it was necessary to have popular candy as it went with the CandyLand theme

Kim – who months ago called Kourtney ‘the least interesting to look at’ for her fashion choices and who recently threatened to fire her from the show – sounded off during her confessional.

‘Kourtney has this vision of no sugar, no disgusting chemicals,’ Kim said.

‘It’s like a completely sugar-free, gluten-free, party-free, fun-free zone because Kourtney has decided that does not make sense. That’s really not the theme of what North and Penelope wanted for their birthday.’ 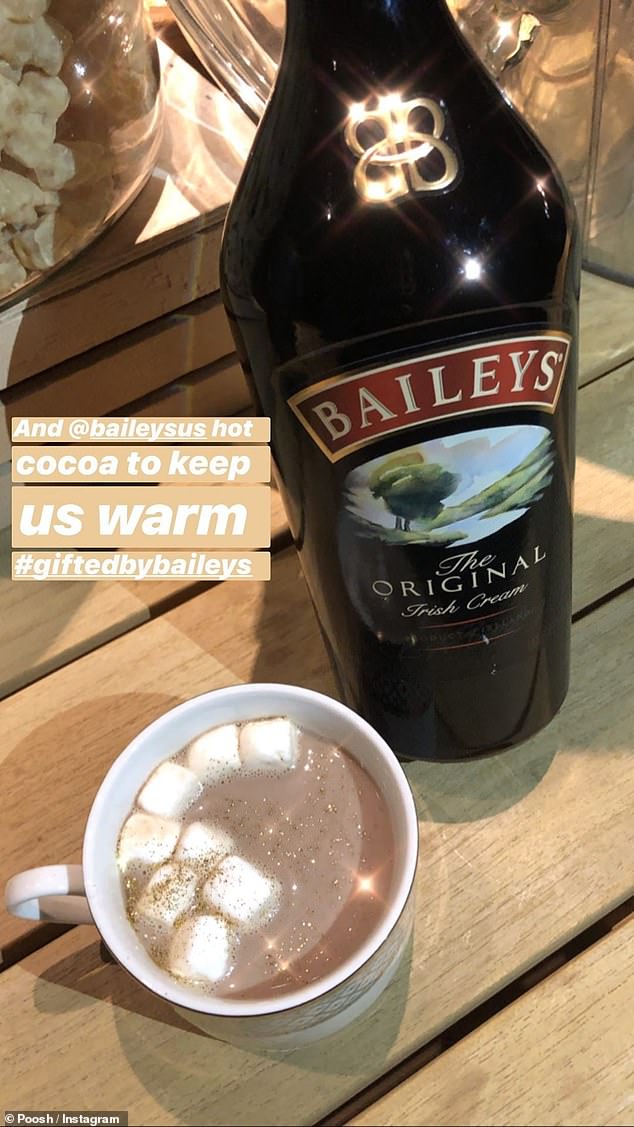 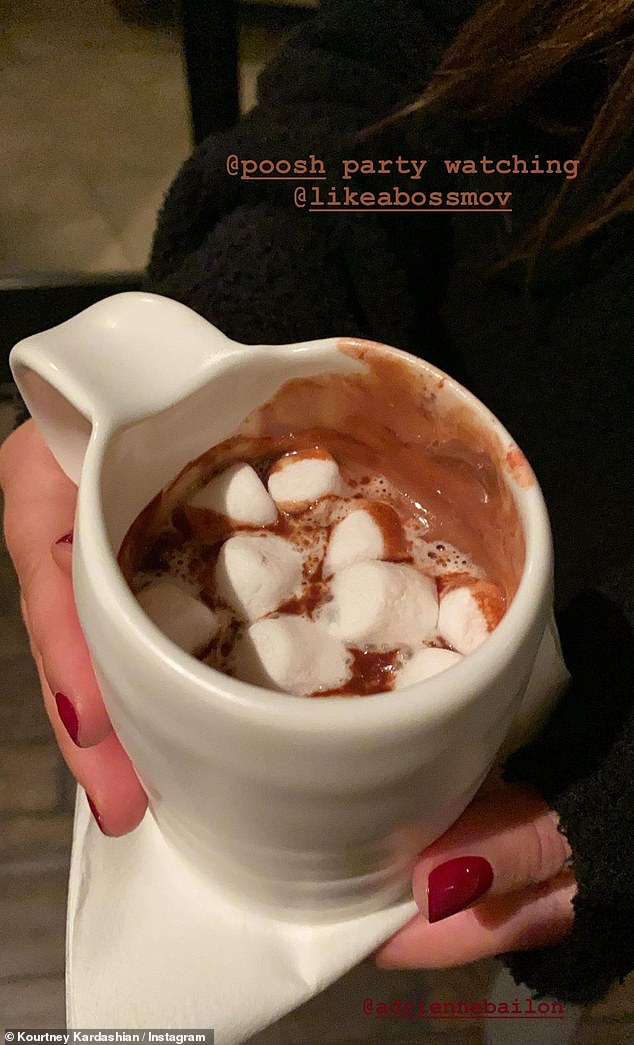 Naughty naughty: And there was hot chocolate with marshmallows 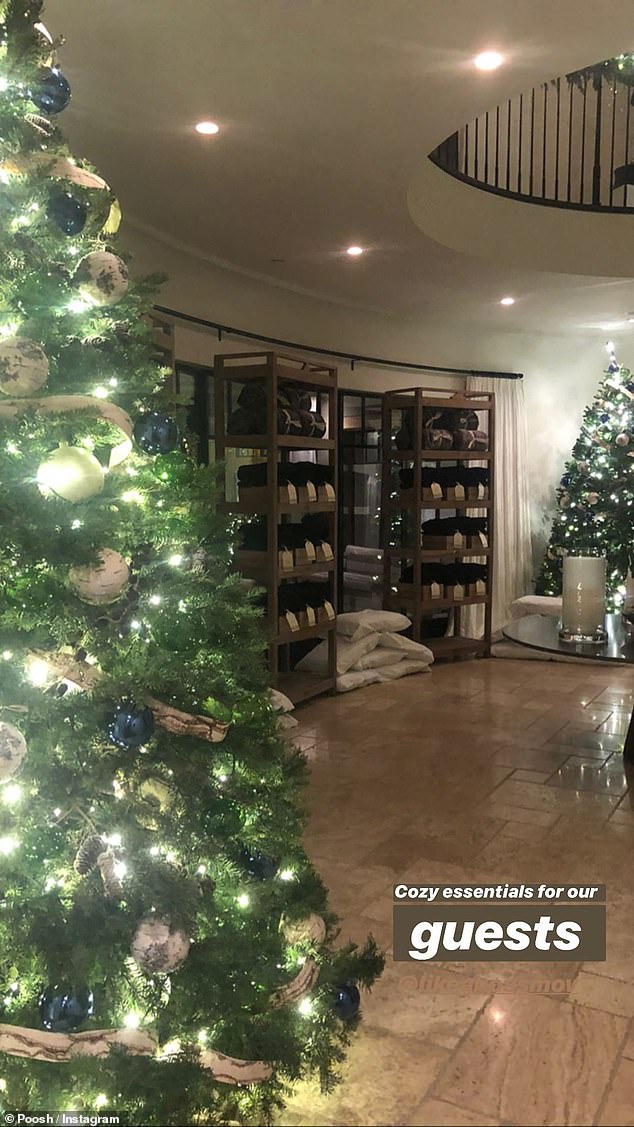 A lovely display: Her foyer had big Christmas trees and was packed with gifts 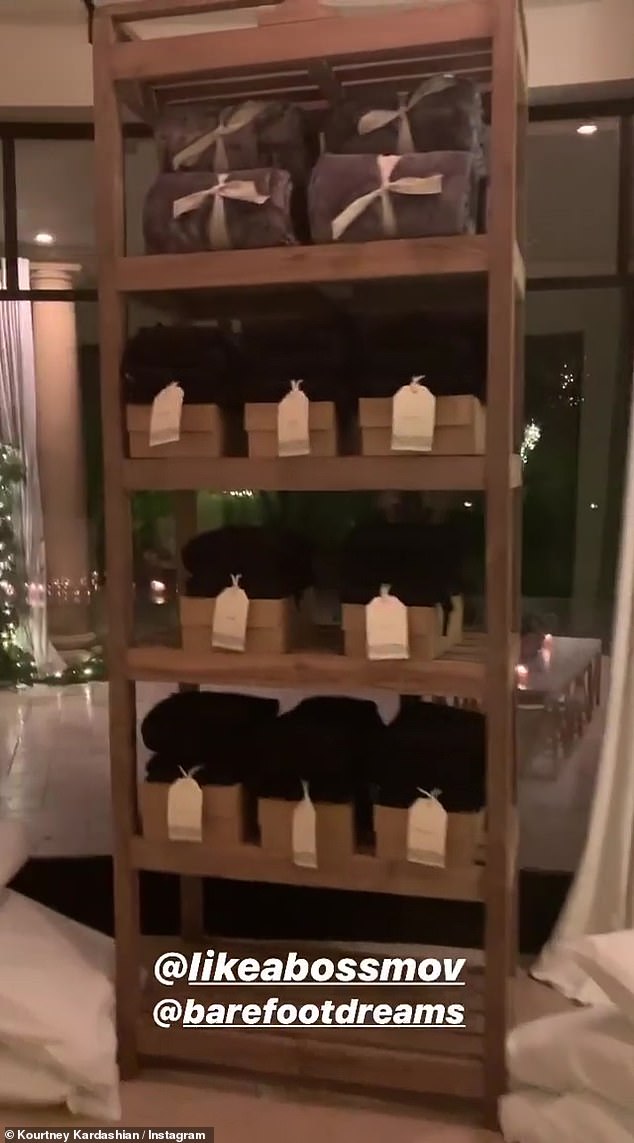 Fun gifts for the guests to take home: Here is a look at the presents from BareFoot 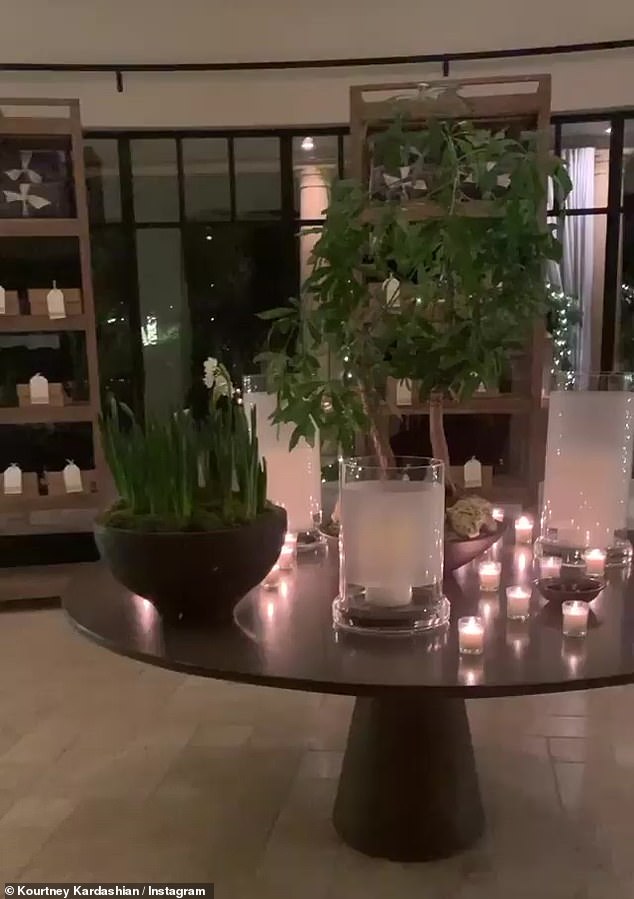 A welcoming entry way: There were candles all over the foyer table

Kourt then said ‘food coloring gives people diseases,’ and she added that her ‘brand is not unhealthy.’

Bringing up her brand angered Kim.

‘This is about a kids party, this is not about your brand!’ slammed the KKW Beauty founder.

Kourtney said that what she stands for is healthy. 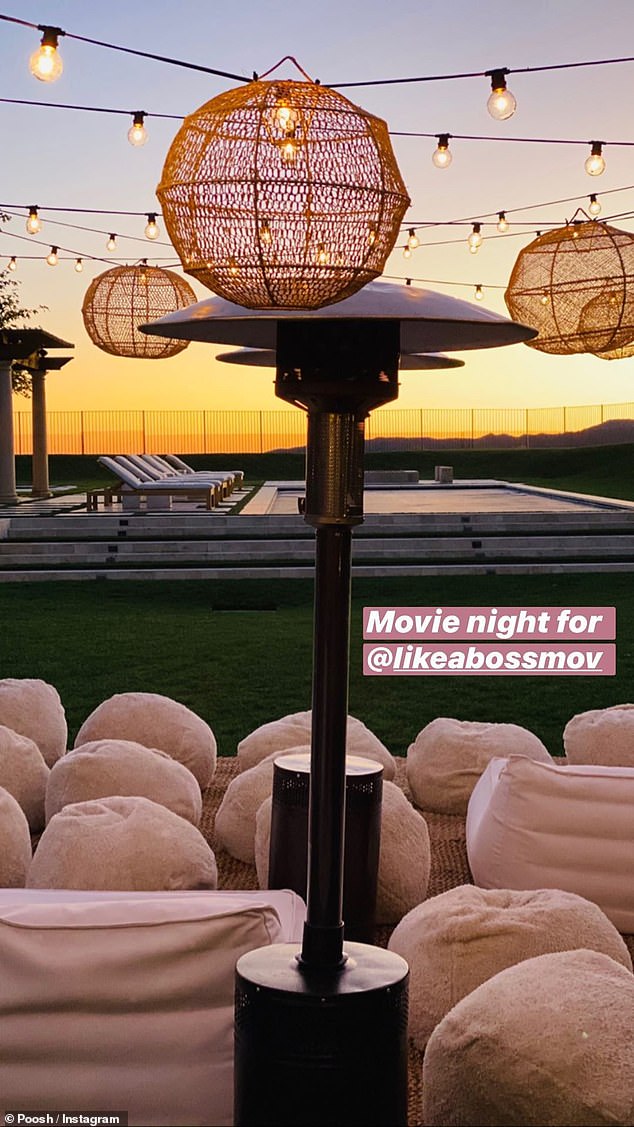 A bit chilly: The screening took place outside with heat lamps nearby 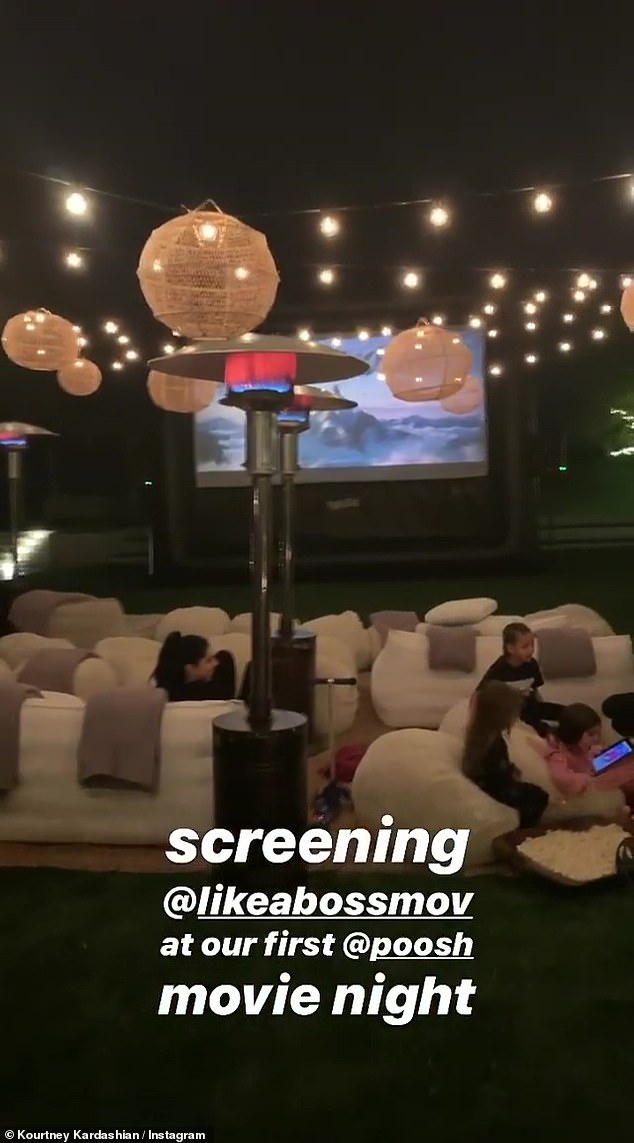 The kids liked it: Saint and Penelope as well as Reign could be seen to the side

The mother-of-four would not give in. She accused Kourtney of being a hypocrite. ‘Why does your car have leather seats, why are you wearing plastic glasses?’ she argued.

The interaction was very tense.

Kourtney was mad in her confessional as well. And she said Kim was simply ‘not willing to compromise.’ She then called Kim ‘dated’ for her choices.

And the college graduate also said that Kim should feel ‘guilty’ for not only giving her kids bad sugar but also offering it up to the guests.

But then Kim is seen in the car again putting her foot down. ‘I want a fun kids party with real candy,’ Kim told her. 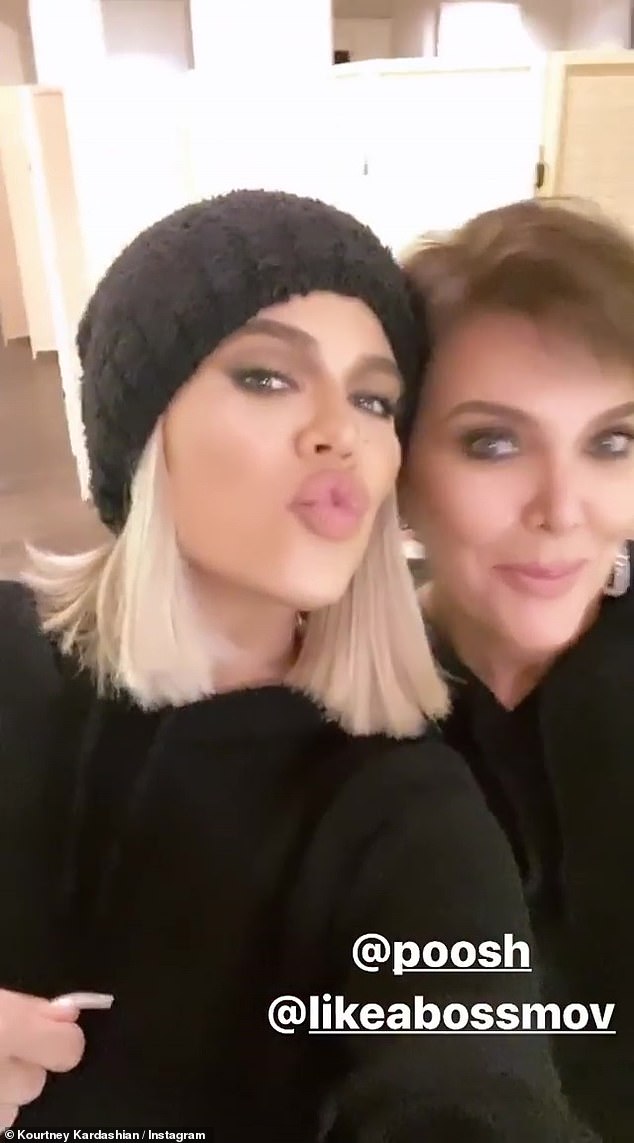 More of the KUWTK cast: Khloe wore a black beanie over her blonde hair as she posed with mom Kris Jenner 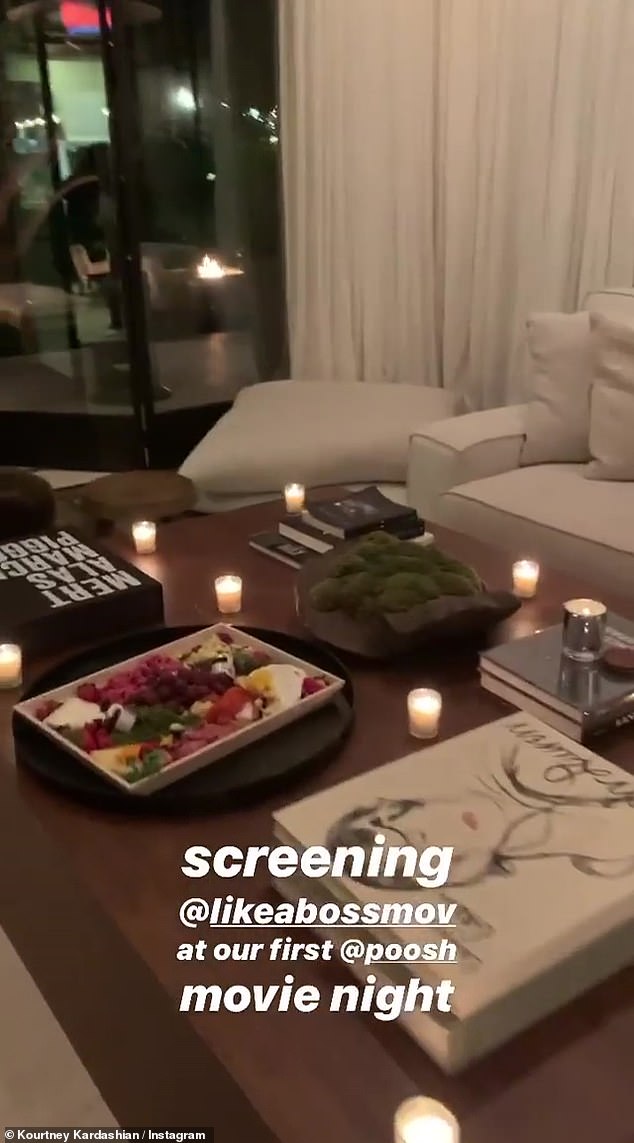 The coffee table: Kourtney had books on her table; one was about photo team Mert and Marcus

In mid October the ladies were at it again as they fought viciously.

The affection between the sisters seems to have dimmed in recent years, as fame and fortune have transformed their lives.

Kris Jenner attempted to ‘push the reset button’, comparing her girls Kim, Khloe and Kourtney and their Jenner half-sisters Kendall and Kylie to the cast of iconic 2004 movie Mean Girls. 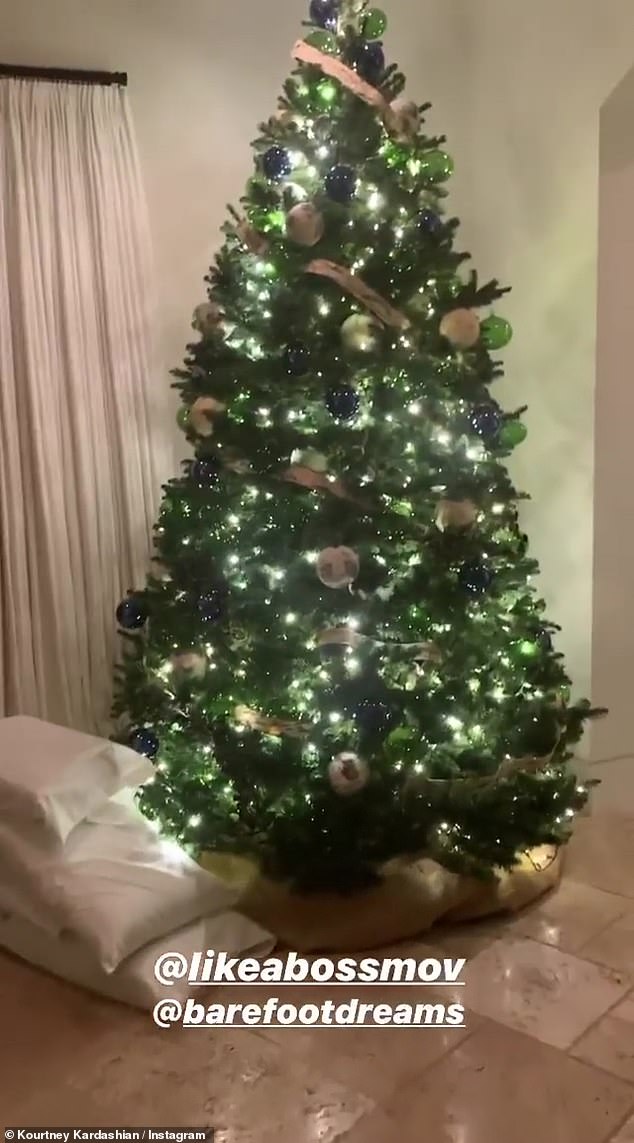 Simple look: Her tree was tall with white and gold ornaments; there appeared to be pillows nearby

‘I feel like the really funny side of you guys outweighed the mean side,’ matriarch Kris tells her daughters. ‘And I feel like it’s gotten a little Mean Girls.’

And in blunt words to Kim, the most famous of the cast, Kris says: ‘As much as I love you, you fight a lot dirtier than you used to fight.’

Listening in, Khloe raises her eyebrows in shock at the straight talking. 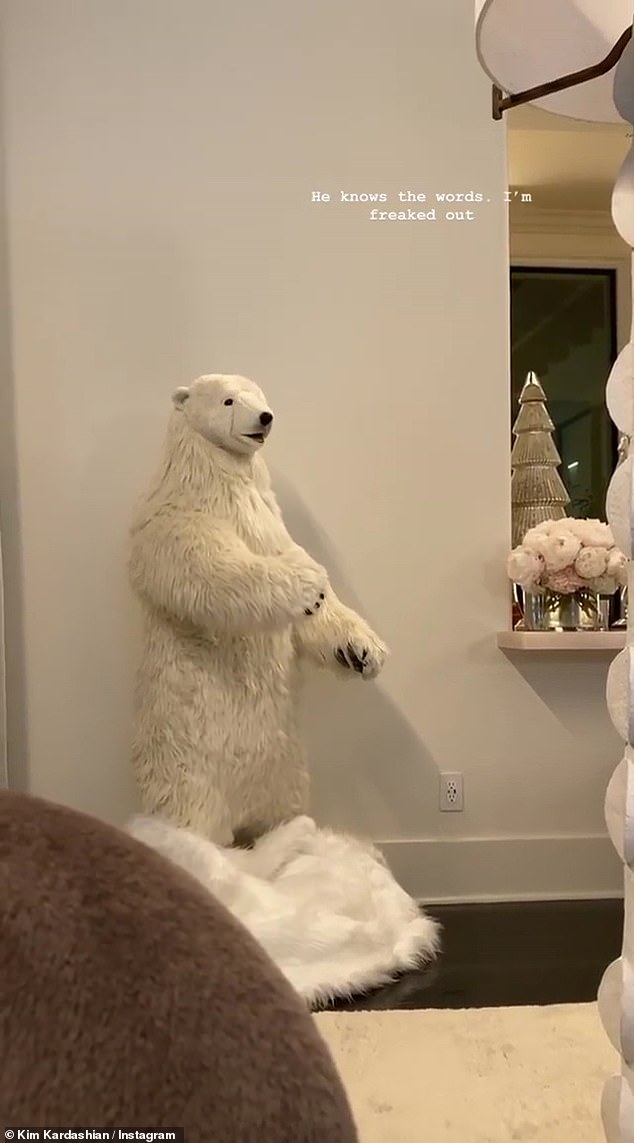 Meanwhile: Kim shared this image of a white polar bear that talks 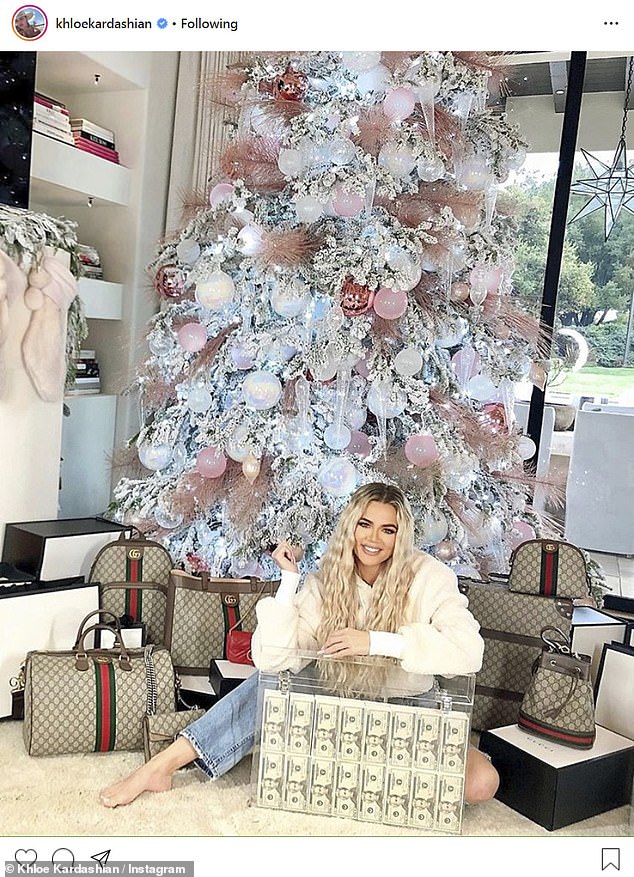 An ad: On Monday Khloe shared this post. She was in front of her pink and white tree. The caption said, ‘Who wants $30,000 USD CASH + ALL the luxury bags pictured here with me?!! Just in time for the Holidays! #ad’

We also see Khloe ask Kourtney in surprise, of the show that made them household names: ‘You would be happy if the show ended?’

We then hear Kourtney insist with venom: ‘Kim can be the biggest f***ing evil person on the planet.’

As for Kendall Jenner, she tells her sisters: ‘I think sometimes, there’s a lot of judgement.’

Even though the sisters fight, Kim still managed to get Khloe and Kourtney to collaborate on her Diamonds KKW Frangrance set.