The reality star, 41, who has had past involvement with assisting both men and women who have been imprisoned, thanked her close friend for ‘fighting this fight’ and being an ‘inspiration.’

The day prior, the star claimed that rapper, Gunna, was being held in jail on gang-related charges with ‘no evidence’ after he was charged in May along with fellow musician, Young Thug.

Support: Kim Kardashian, 41, sent her support to her best friend, La La Anthony, as she spent time with incarcerated men at Rikers Island

The mother of four shared La La’s post capturing a moment when she visited Rikers Island along with rapper, Lil Baby, where they spent time giving help and inspiration to young prisoners.

‘I have to highlight my best friend! @lala has spent hours and hours inside Rikers Island over the last few months spending time when young men are incarcerated and helping to give them advice and not only teaching them but come home with a heavy heart and learning so much herself,’ Kim typed out.

The star added, ‘I love you for fighting this fight and being such an inspiration to me and so many others!’

She also reposted another snap of her best friend posing with her 15-year-old son, Kiyan, who also accompanied her along with Lil Baby.

Similar to La La, the SKIMS founder has been involved in criminal justice reform while also being an advocate for those she believes to have been wrongfully imprisoned over the years. 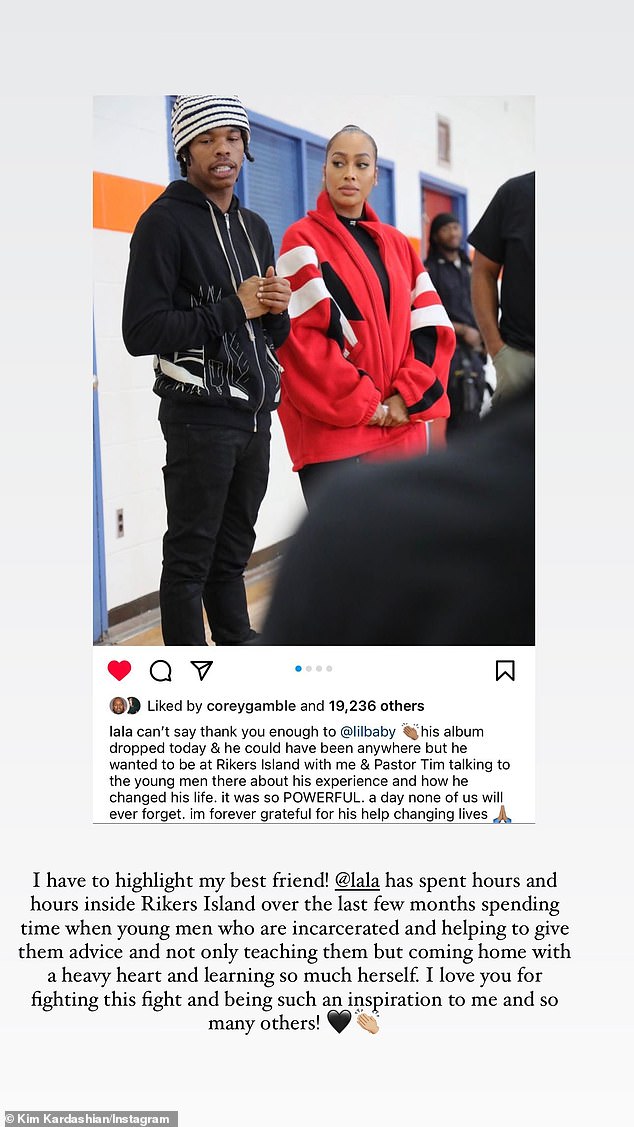 ‘Inspiration’: The reality star, who has been an advocate of prison reform for many years, thanked her friend for ‘fighting the fight’ 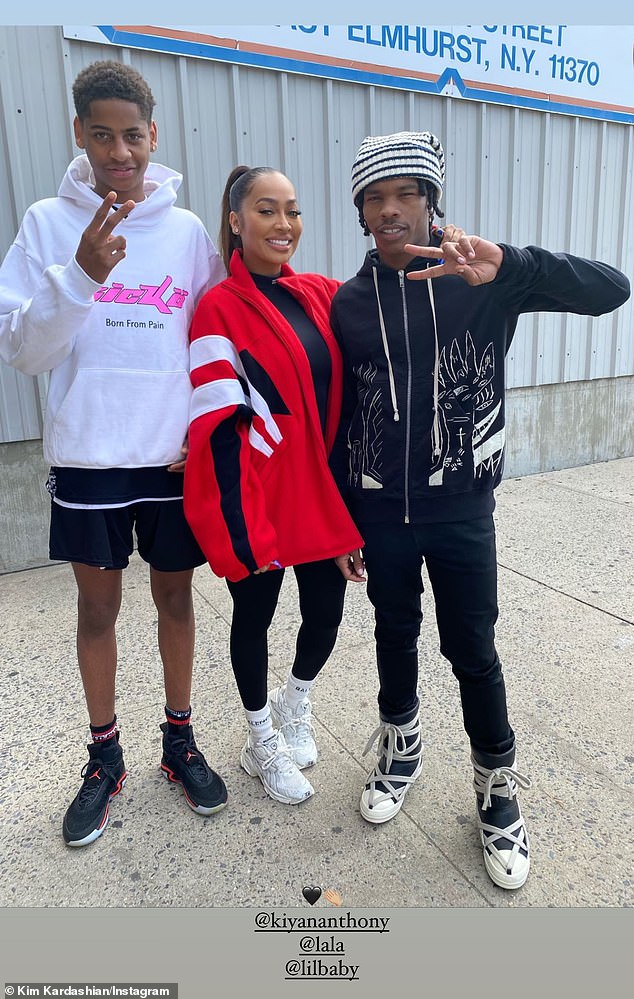 Working together: Lala, her 15-year-old son, Kiyan, and rapper, Lil Baby, traveled to Rikers Island to give help and advice to young men in prison

On Instagram earlier Thursday, Kim voiced her claims that rapper, Gunna, whose real name is Sergio Kitchens, was being held in prison with little to ‘no evidence’ on gang-related charges, that also included both armed robbery and murder.

‘Imagine sitting in a jail cell for 155 days with no bond when the only evidence against you is a ticket for an unrelated window tint and someone saying you weren’t in a gang,’ Kim began her text post.

‘That’s where my friend Sergio finds himself today after having his bond denied for the third time despite there being zero evidence that he committed a crime.’

The two stars both were in attendance at the 2022 MET Gala in New York City in May, shortly before his arrest.

‘He appreciated my interest in criminal justice reform and asked me to take a look at his cousin’s case,’ she said, presumably referring to their first meeting earlier this year. 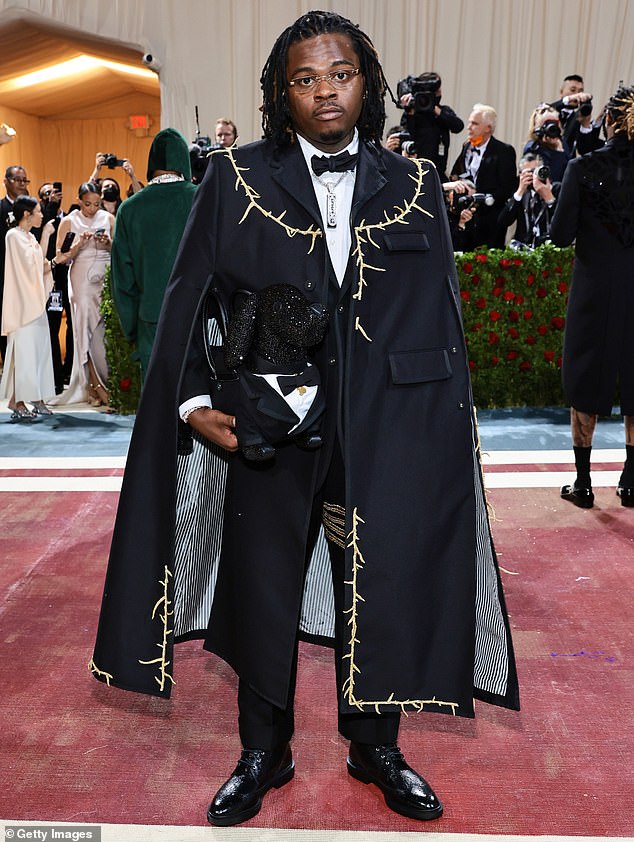 Defending: Earlier on Thursday, Kim went onto her Instagram and claimed that rapper, Gunna, was being held in jail with little to ‘no evidence’; pictured at the 2022 MET Gala in NYC 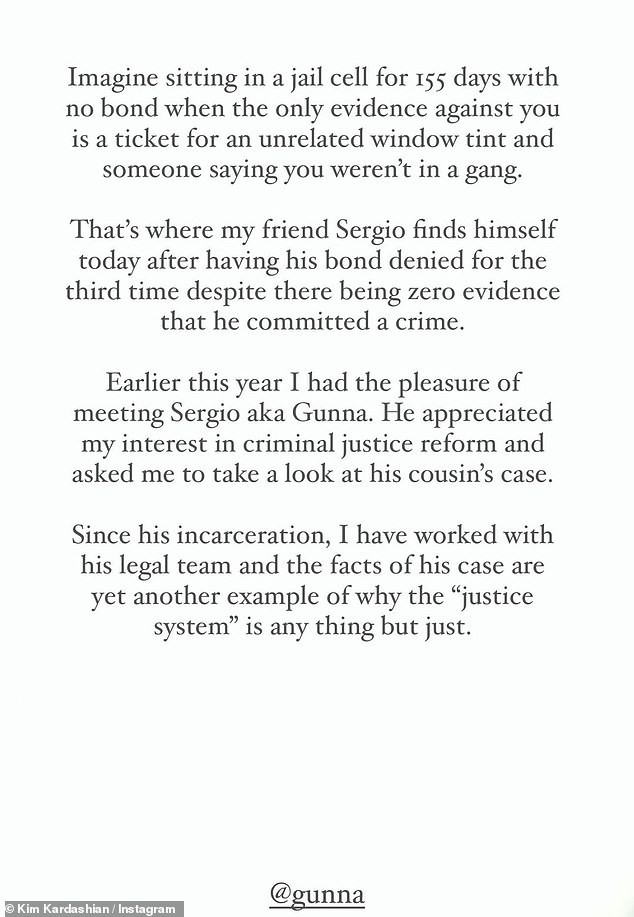 Voicing support: The reality star took to her Instagram to voice her defense for Gunna after his bond was denied for the ‘third’ time 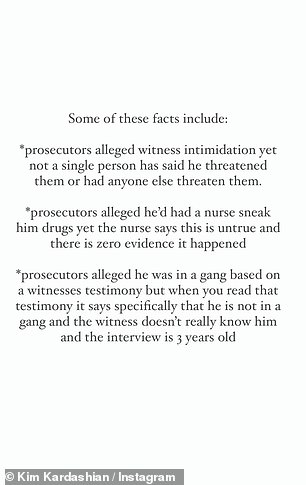 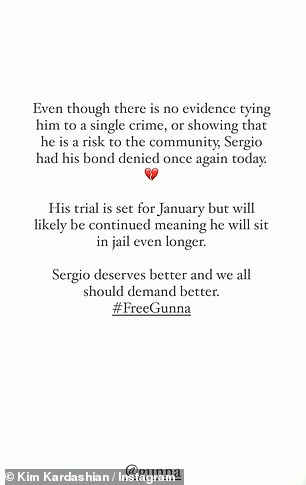 Law: Kim, whos is currently pursuing a law degree, expressed that she has ben working with Gunna’s legal team

Kim added that she had lately been working with the musicians legal team, adding that, ‘the facts of his case are yet another example of why the ‘justice system’ is any thing but just.’

The Kardashians star then gave a number of ‘facts’ that she believed supported her claims, such as ‘prosecutors’ alleging he was in a gang, but the witness testimony ‘says specifically that he is not in a gang and the witness doesn’t really know him…’

With Gunna’s trial set for January of next year, the businesswoman expressed that he ‘deserves better’ with the hashtag ‘#FreeGunna’ at the end of her post. 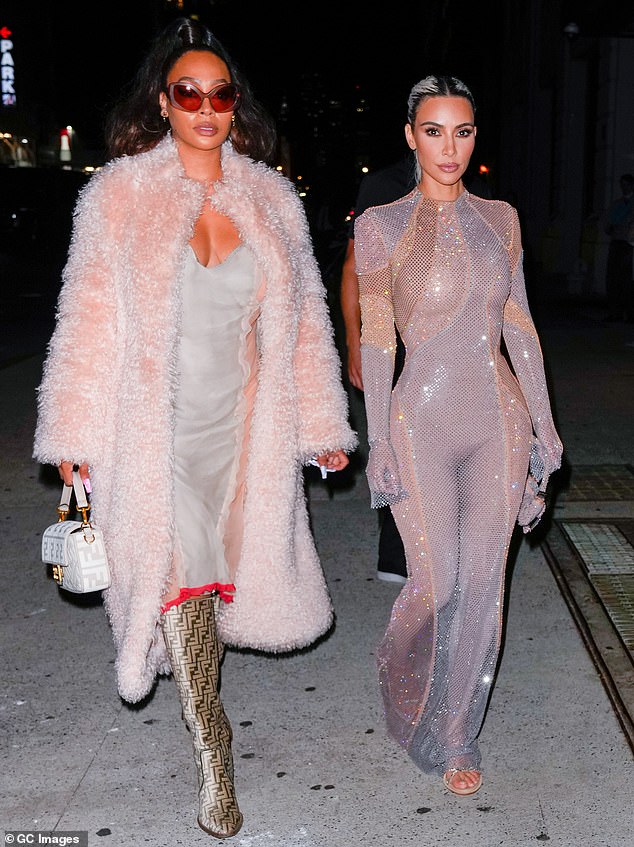 Talented duo: With both friends working to help those in prison, Kim has been involved in prison reform over the years; the best friends seen in September in NYC 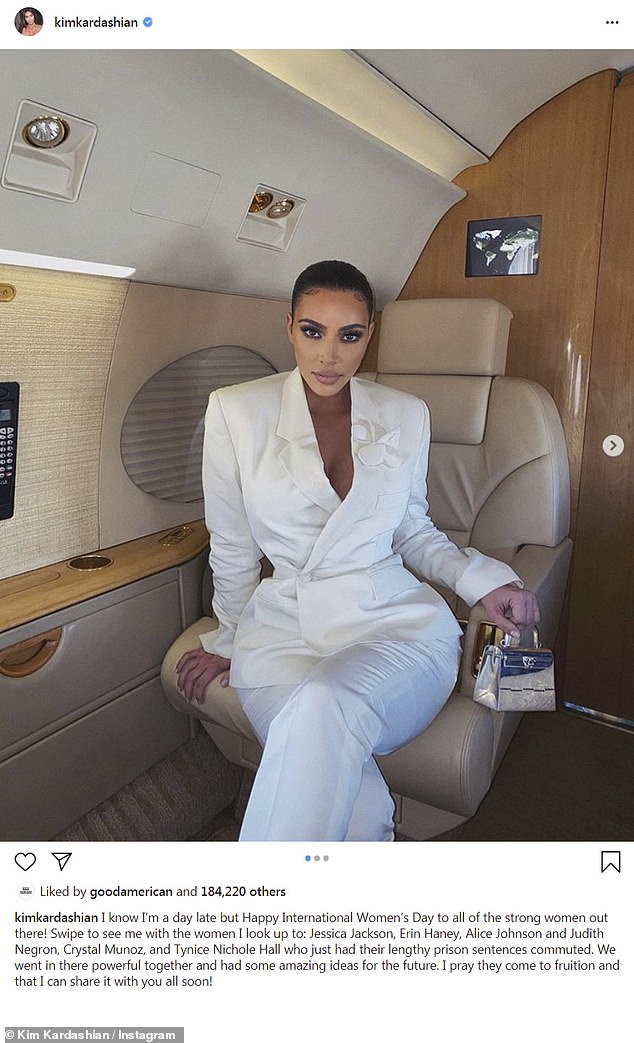 Freeing incarcerated women: Throughout her journey in prison reform, Kim helped free women, such as Crystal Munoz, from a lengthy prison sentence

Along with defending Gunna, Kim has helped free those who have been incarcerated in the past, such as Crystal Munoz in 2020.

She was sentenced for 18-years in prison for drug conspiracy and was forced to leave behind her 5-month-old baby and welcomed a second child in jail.

At the time of her clemency by then 45th President of the United States, Donald Trump, Kim sent out a tweet regarding the situation.

‘Crystal was shackled by prison guards during the birth of her second daughter,’ she typed. ‘Crystal case was highlighted in the First Step Act which banned the degrading and inhumane treatment of shackling female prisoners during childbirth.’

Kim has notably been working towards achieving a law degree, and passed her baby bar exam in December 2021. 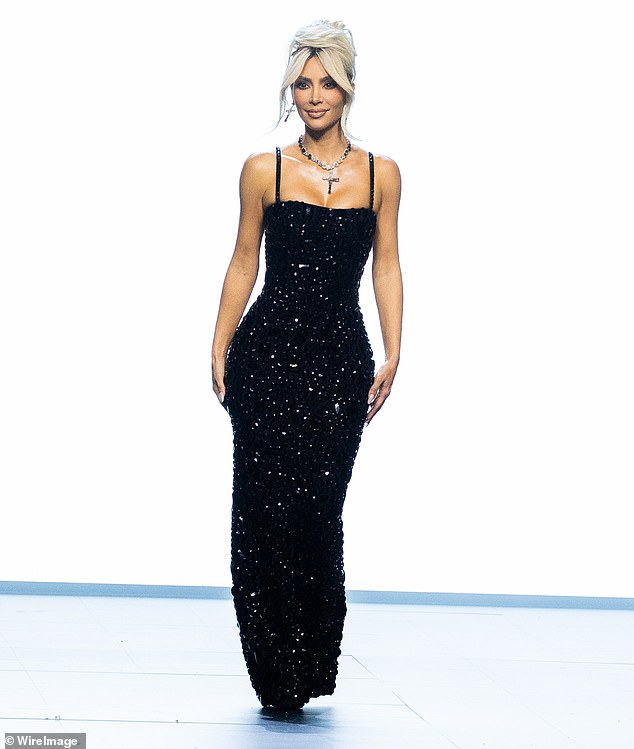 Law degree: Kim has been working towards achieving a law degree, and passed the baby bar exam last year in December; seen in September in Milan