Kim Kardashian was spotted in a pale beige outfit while in sunny New York City on Tuesday afternoon.

The 41-year-old reality TV star was not alone. The siren was seen walking down the street with her two mini-me daughters: North, aged nine, and Chicago, aged four, who both wore dark colors as they carried matching Balenciaga purses.

This comes after the SKIMS founder posted fresh photos of her vacation in Palm Springs, California with her boyfriend Pete Davidson of Saturday Night Live fame. 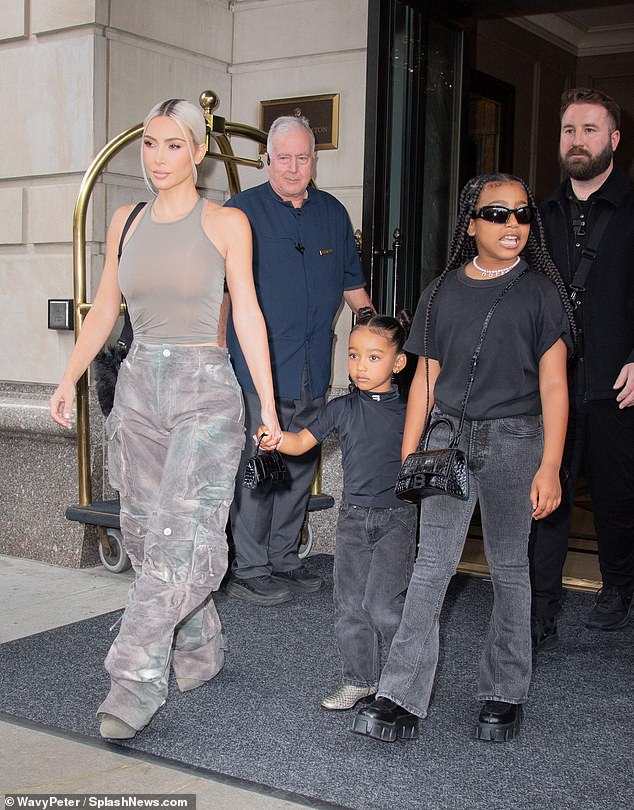 Kim looked ready for the hot weather in her chic outfit that made the most of her curves as she left the Ritz-Carlton hotel with a bodyguard in tow.

The sister of Khloe and Kourtney Kardashian had on a beige skintight sleeveless SKIMS top that showed off her very slender figure.

The Selfish author finished off her look with pointy shoes that peeked out from under her slacks.

Her white blonde hair was pulled back as she had on dewy taupe makeup colors. 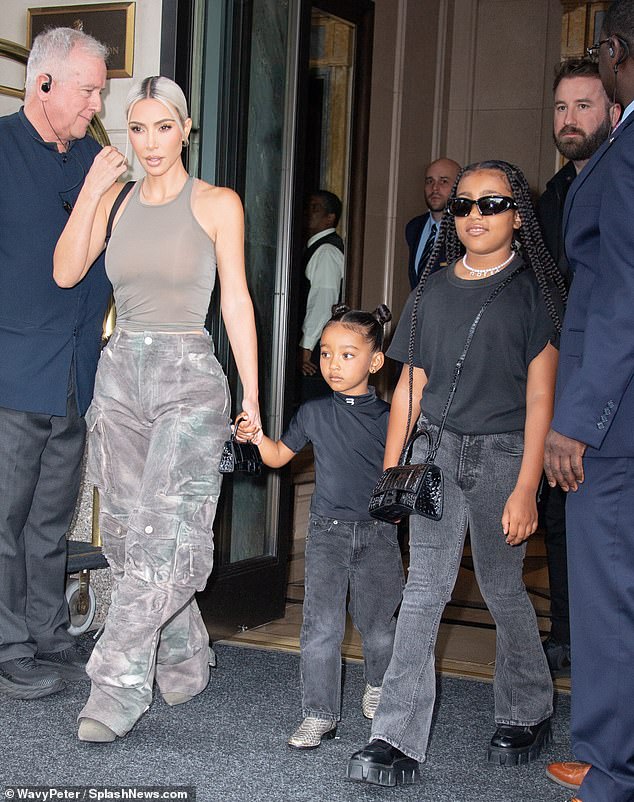 Le look: Kim looked ready for the hot weather in her chic outfit that made the most of her curves. The sister of Khloe and Kourtney Kardashian had on a beige skintight sleeveless SKIMS top that showed off her very slender figure 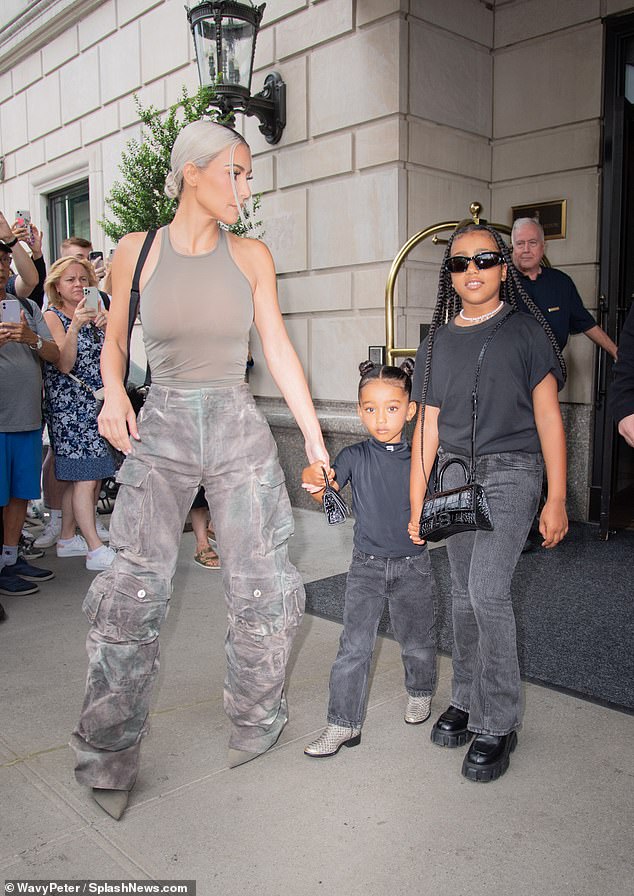 The kids are all right: The little girls wore dark colors with matching Balenciaga purses

She was seen exiting her hotel as she held hands with Chicago.

Both girls had on black T shirts and dark slacks as they followed their famous mother.

And they each had crocodile purses in black from Balenciaga: Chicago’s was a small handbag that appears to be in the $1,200 range while North had a larger version worn crossbody style which seems to retail for around $3,000.

Kim also has two sons – Saint and Psalm – but they were not seen in the new images. 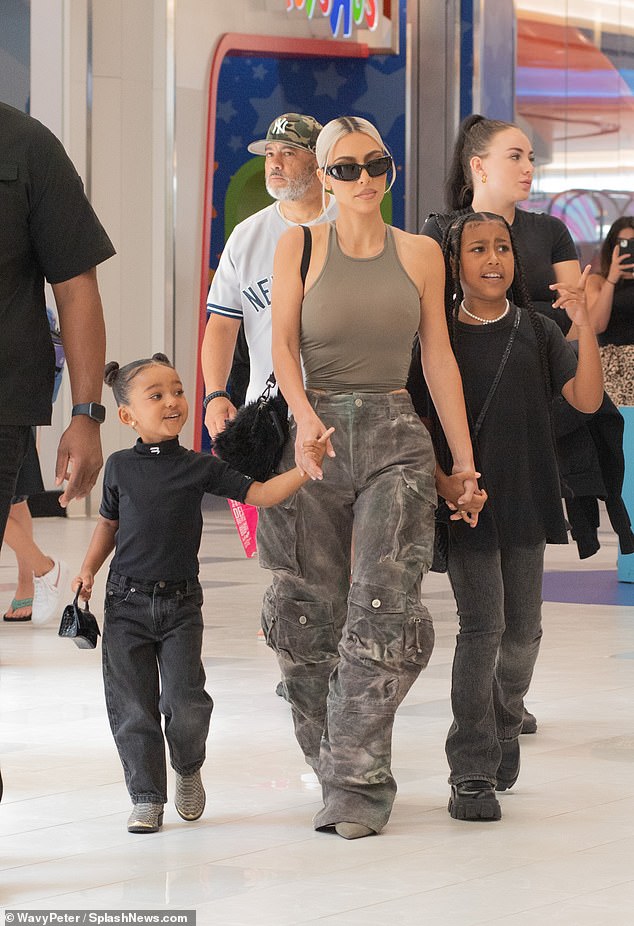 Mall cats: Later the family was seen hand in hand as they hit the American Dream mall in New Jersey. They stopped by a Toys R Us store for a little shopping spree 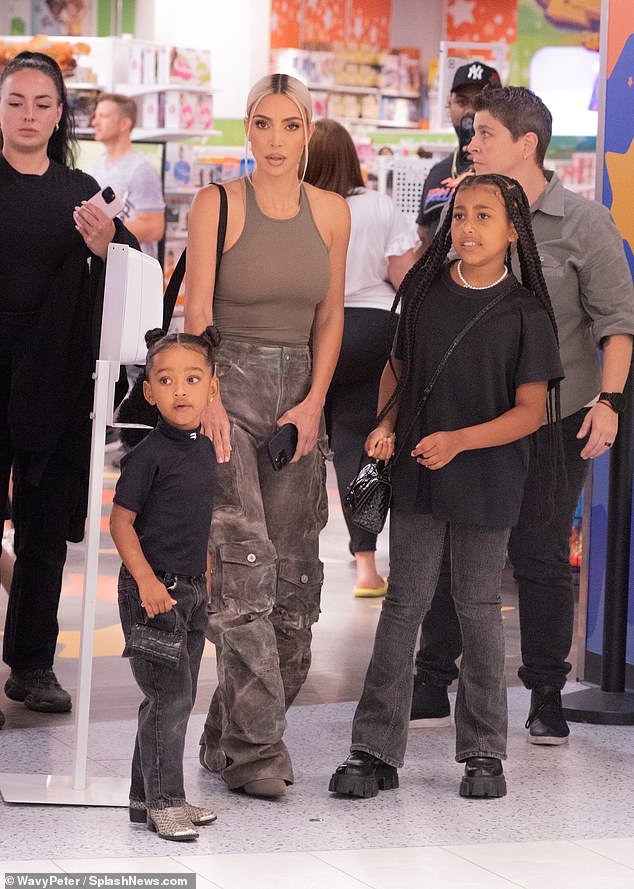 So much to choose from: The ladies looked to have no shopping bags in their hands outside a shop with their guard 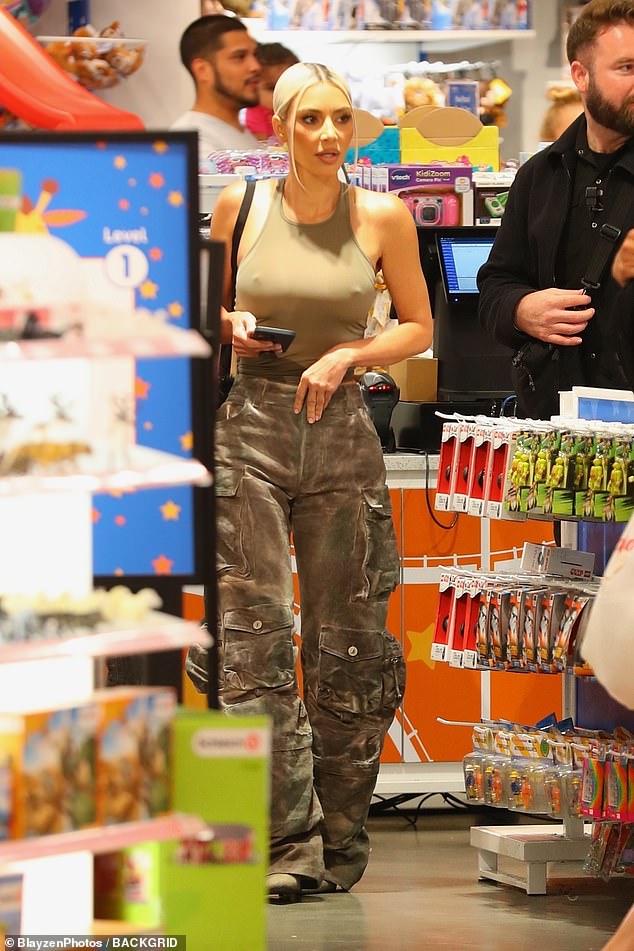 Not hiding her chest: A revealing look: Kim appeared perky as she looked at her cell phone in the store

Later the family was seen hand in hand as they hit the American Dream mall in New Jersey.

They stopped by a Toys R Us store for a little shopping spree before hitting a candy shop and then going on an amusement ride.

This comes after Kim shared new photos with Pete.

The 28-year-old comedian leaned down over his love as if to kiss her, while Kim arched her back while closing her eyes and showing off an ecstatic expression on her face.

The star and her love appeared to be visiting her the family’s Palm Springs home for some time out in the sun, as her distinctive pool and palm tree–decorated lawn was visible. 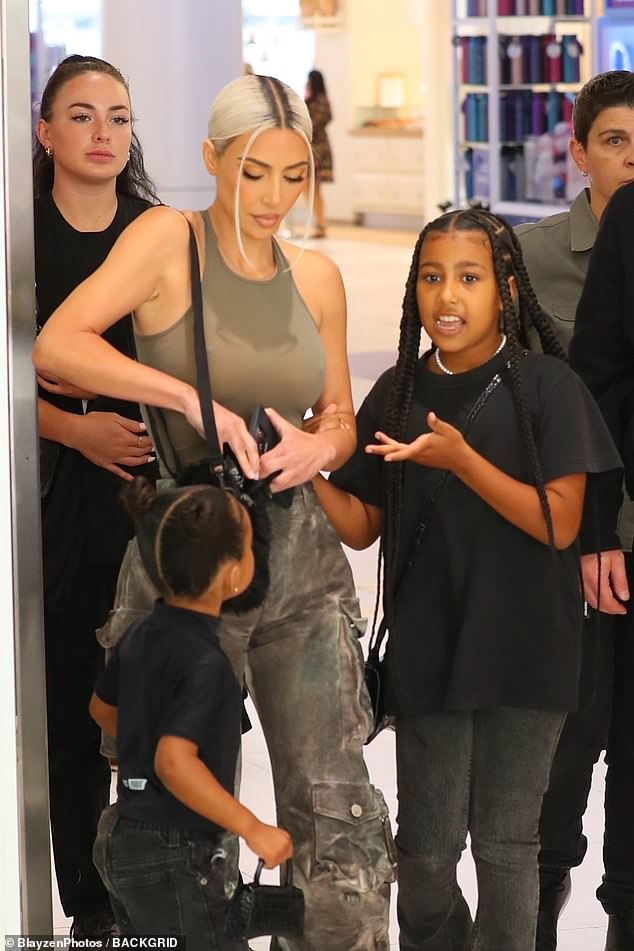 Holding on to mom: North put her hand on mom’s arm as she seemed to be explaining something 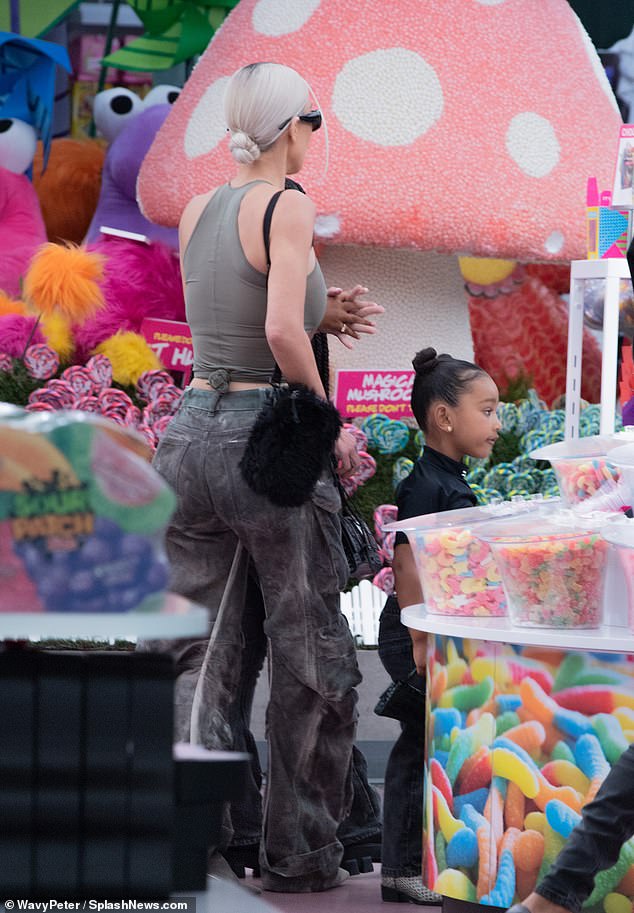 And a candy store too! The girls looked happy as they sorted through the barrels of treats

Despite having others around, Kim didn’t mind being intimate and affectionate with her boyfriend.

Two photos showed her placing her bare feet on the comedian’s tattooed chest while he held a fruity drink in his hand.

He glanced down at her affectionately while grasping her toned legs.

Kim and Pete may have been joined by other family members, as both Kourtney and Kris Jenner’s Palm Springs homes often are a gathering place for the Kardashian–Jenner clan. 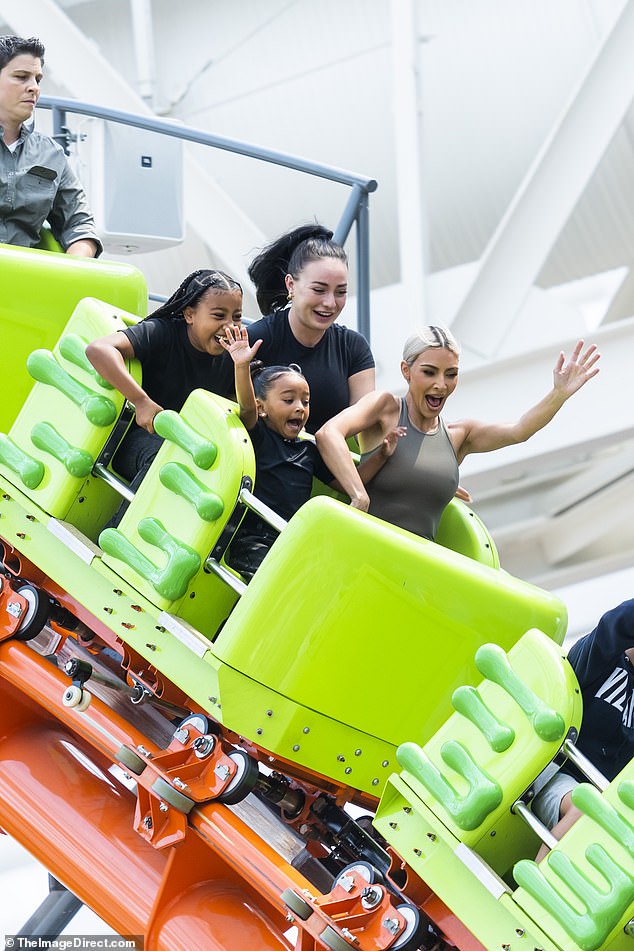 A rollercoaster as well: Kim screamed as she held up a hand on this ride with Chicago next to her and North in the back; behind them appeared to be their guard 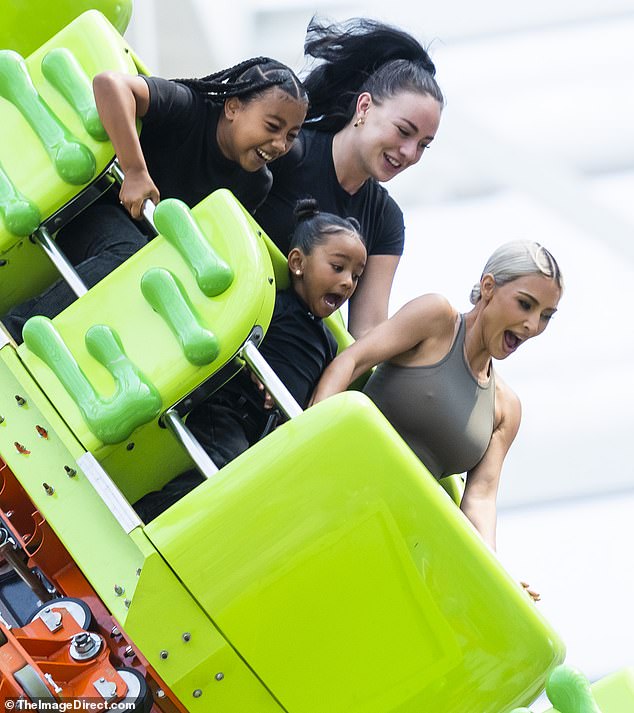 A little too much for Chi? Chicago looked terrified in this image

Kim appeared to be keeping her ensemble totally casual for the day, which saw her sunbathing in a skimpy black bikini that highlighted her curves while Pete sat next to her.

He went shirtless to show off his abundant tattoos while wearing simple gray sweatpants.

The two seemed to be ready for a pool party with friends or family, as they had inflated pool toys laid out by the side of the water, and other people were pictured from behind or just out of frame in the photos.

During an appearance on Jimmy Kimmel Live in April, Kim revealed that Pete also paid tribute to the special moment for Valentine’s Day, when he gave her their costumes from the sketch as a gift.

The King Of Staten Island star also made it clear that he was dedicated to Kim’s entire family, as he added a ‘KNSCP’ tattoo just above the Aladdin ink, which stood for the first initials of Kim and her children North, Saint, Chicago and Psalm. 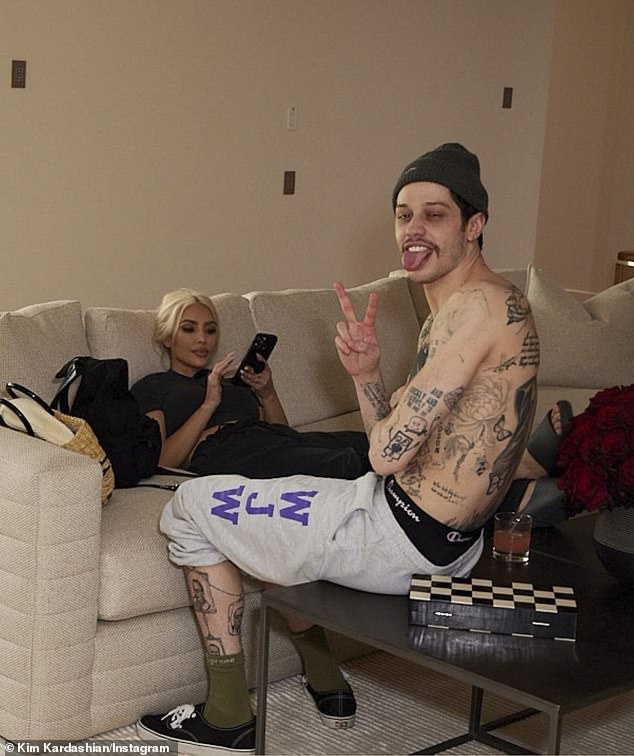 Peace: This comes after the SKIMS founder posted fresh photos of her vacation in Palm Springs, California with her boyfriend Pete Davidson of Saturday Night Live fame