Halloween may be over, but Kim Kardashian West is still sharing her family’s over-the-top costumes.

On Sunday, the 39-year-old reality star took to her Instagram account with yet another set of funky threads for her large brood.

The photo showed her husband Kanye West, 42, and their children Saint, aged four, Chicago, aged one, and Psalm, five months, dressed up as characters from the animated movie Sing. 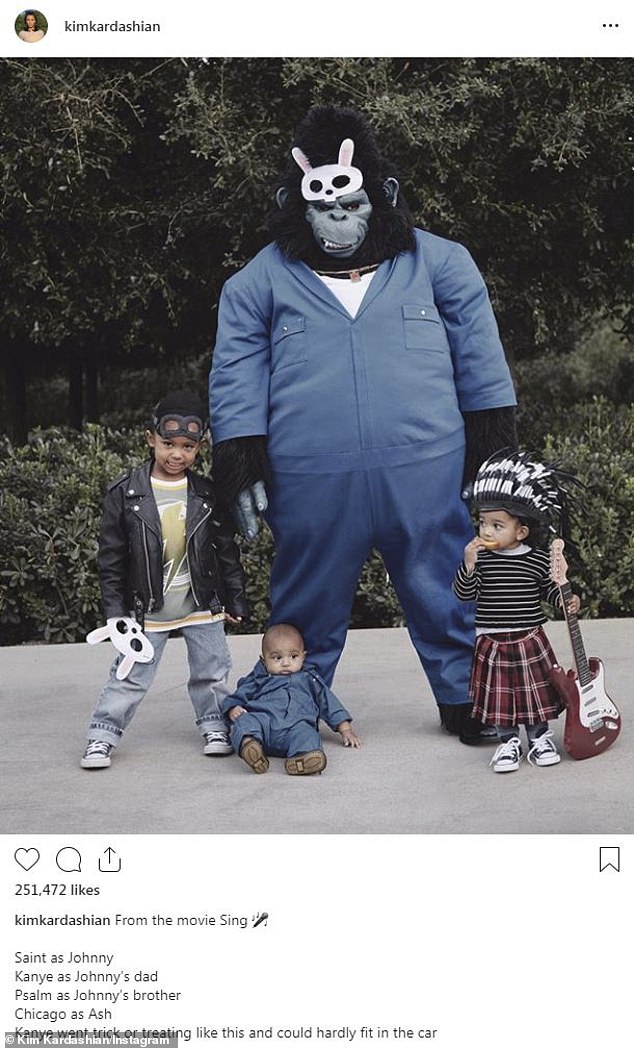 Halloween: On Sunday morning, Kim shared this photo of Kanye and  three of  their children as they dressed up as the characters from Sing for their trick-or-treating adventures

‘From the movie Sing: Saint as Johnny; Kanye as Johnny’s dad; Psalm as Johnny’s brother; Chicago as Ash. Kanye went trick or treating like this and could hardly fit in the car,’ she shared alongside the photo.

The photo showed Kanye in a larger-than-life costume of the creature who was Johnny’s dad in the movie. The four posed for a photo as Chicago appeared to be indulging in a pre-trick-or-treating snack.

And while their oldest daughter North, aged six, didn’t appear to be tagging along for the fun, she made up for lost time with the family’s other wild costumes. 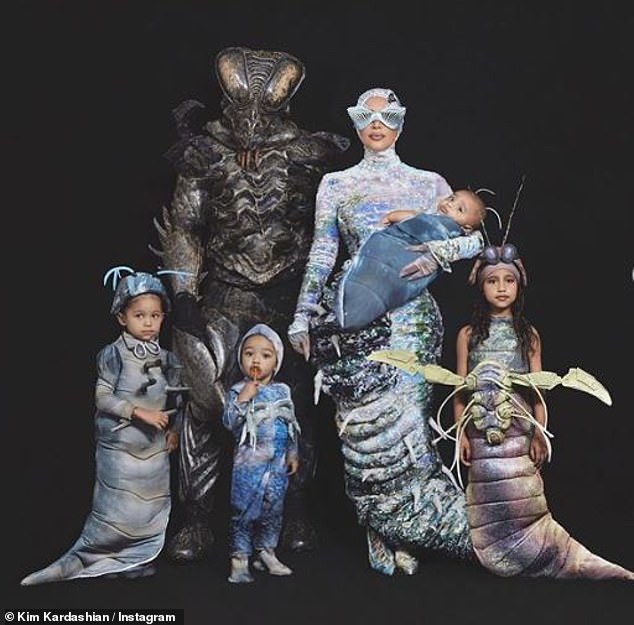 ‘West Worms Prelude 1 Set to Lorna Anderson,’ Kim shared ahead of another wild costume set showing the family dressed up as worms.

The photo showed the family dressed up as bugs with the shapewear designer adding that her costume actually glowed.

They all posed for photos as Chicago had a treat in her hand while starring at the camera.

Little Psalm also didn’t miss out on the fun as Kim had her youngest child bundled up in a cocoon as she held him for the photoshoot. 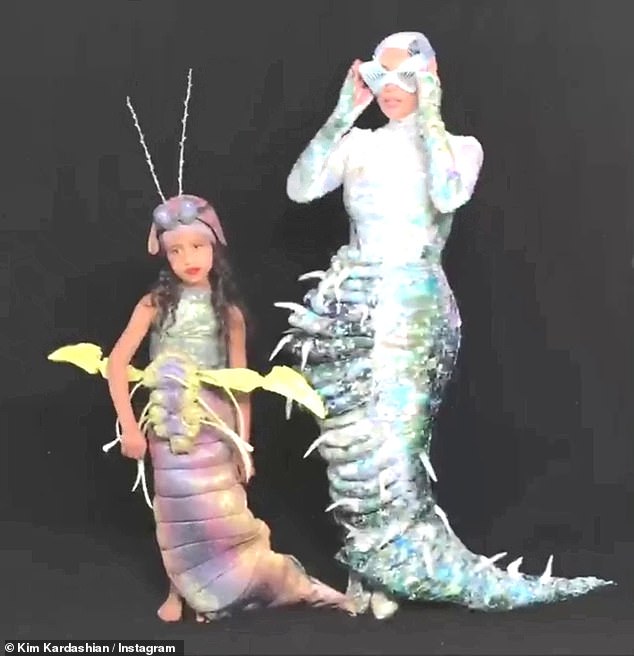 Mom and daughter: Kim and her daughter North get ready for their family photoshoot in their life-sized bug costumes 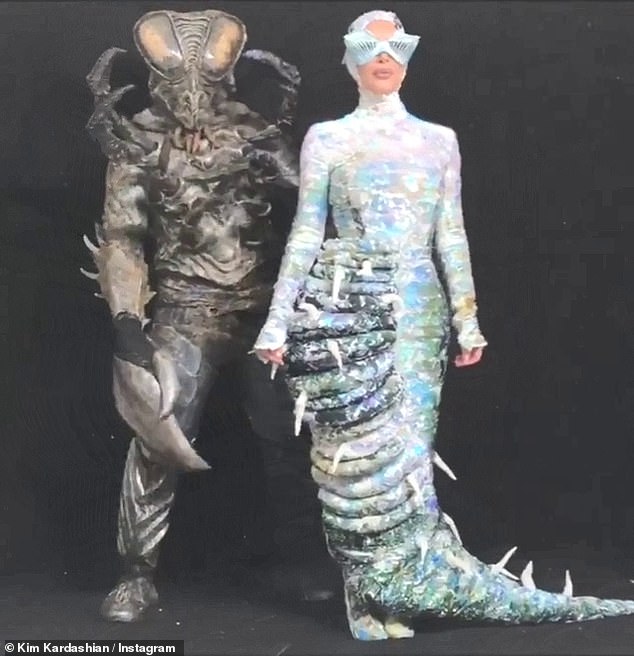 Mom and dad: Kim and Kanye pose in their unique costumes for their bug-inspired family theme

But that wasn’t all, the family also dressed up as the Flintstones as their first costume to celebrate the holiday.

This set of costumes did come with its fair share of challenges as Kim revealed that Chicago was afraid of West’s costume who was dressed up as the big purple dinosaur, Dino.

‘This family pic was such a challenge because Chicago was so scared of Dino! LOL We tried to explain and show her that it was just daddy but she didn’t get the concept yet,’ she said alongside the photo on Friday. ‘So shout out to the photographer for editing her in & making our family Flintstones dreams come true!’ 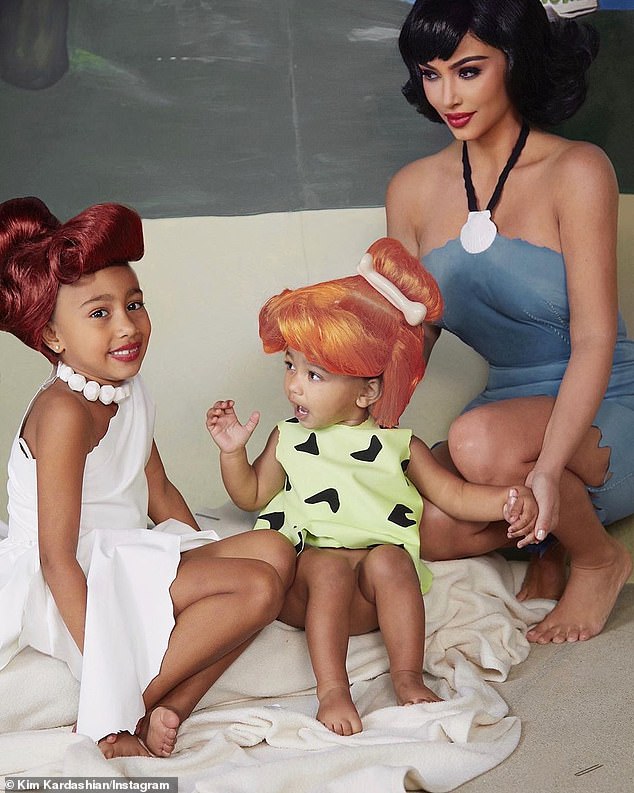 Flinstones: Kim and the family also dressed up as the Flinstones. Chicago got a bit to creeped out by Kanye’s costume as Dino the dinosaur 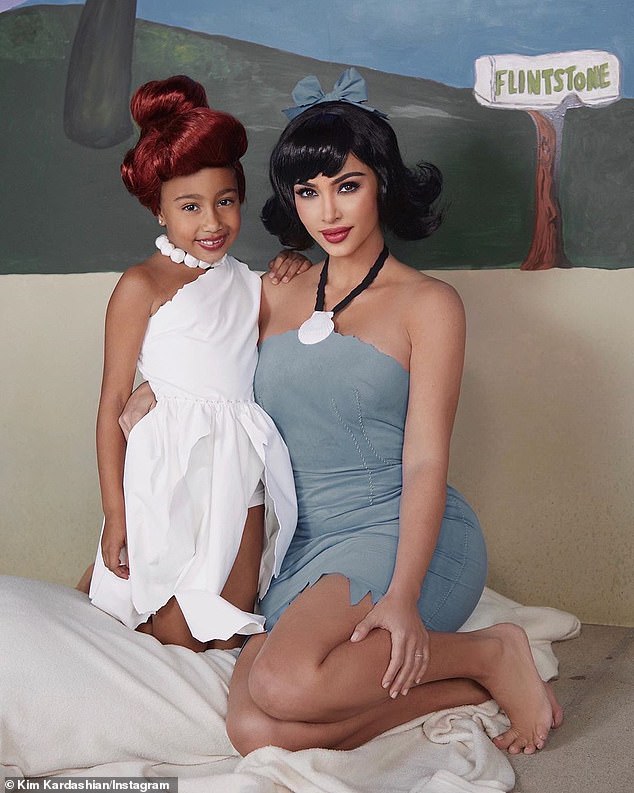 How sweet: Kim and North pose in their first of many Halloween costumes for this year 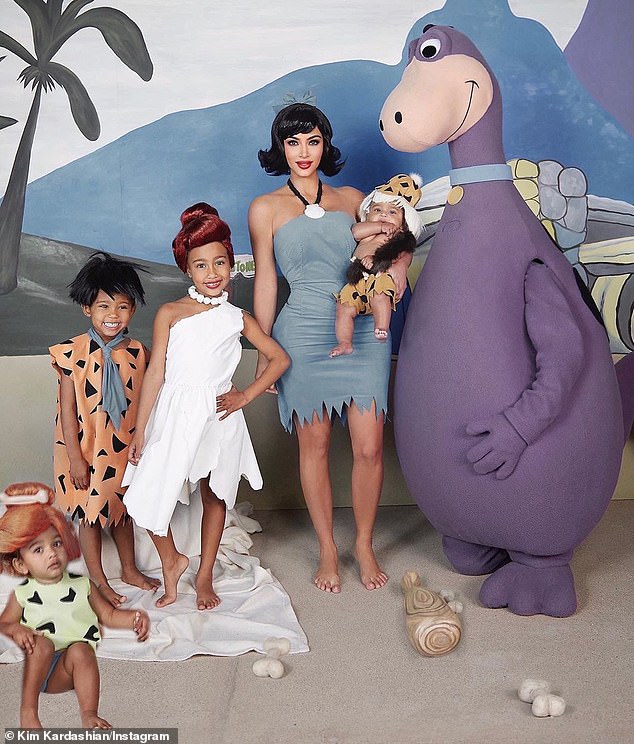 Family: The Kardashian West family posed at the Flintstones but not without some complications. Kim revealed that Chicago was afraid of Kanye West’s costume

But while the family costumes appeared fun and unique. Kim did venture off on her own for a solo costume.

The mother-of-four showed off her toned curves in the Legally Blonde inspired green bikini as well as in a pink silk dress that was worn by the famous Elle Woods character.

She even brought in a camera crew to re-create Elle’s Harvard Law admissions video. 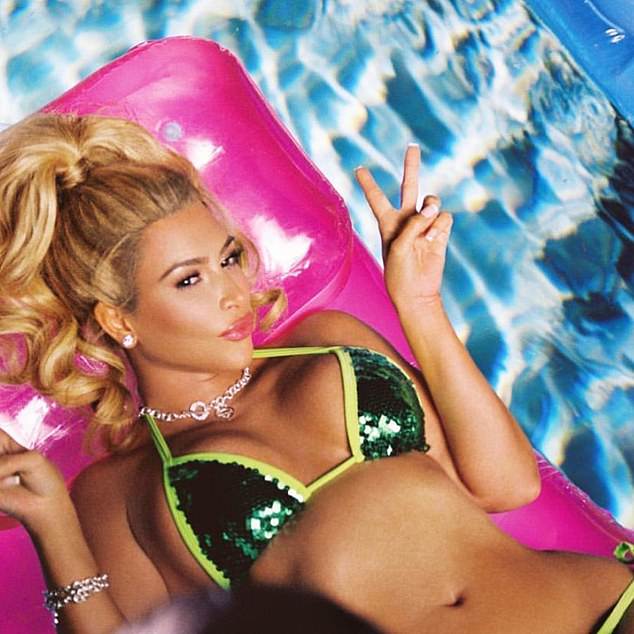 Iconic: She sported the iconic pink bikini and even re-created the Harvard Law School application video