It was all about the gams when Kim Kardashian hooked up with a couple of her gal pals Olivia Pierson and her cousin Natalie Halcro on Saturday night.

The three ladies are seen striking a number of poses and strutting their stuff, poolside, in a series of photos the SKIMS co-founder posted on Instagram.

A full moon could be seen glowing in the backdrop, which in Astrological terms can symbolize a number of heightened emotions, including a union of the emotional and physical, according to Reader’s Digest. 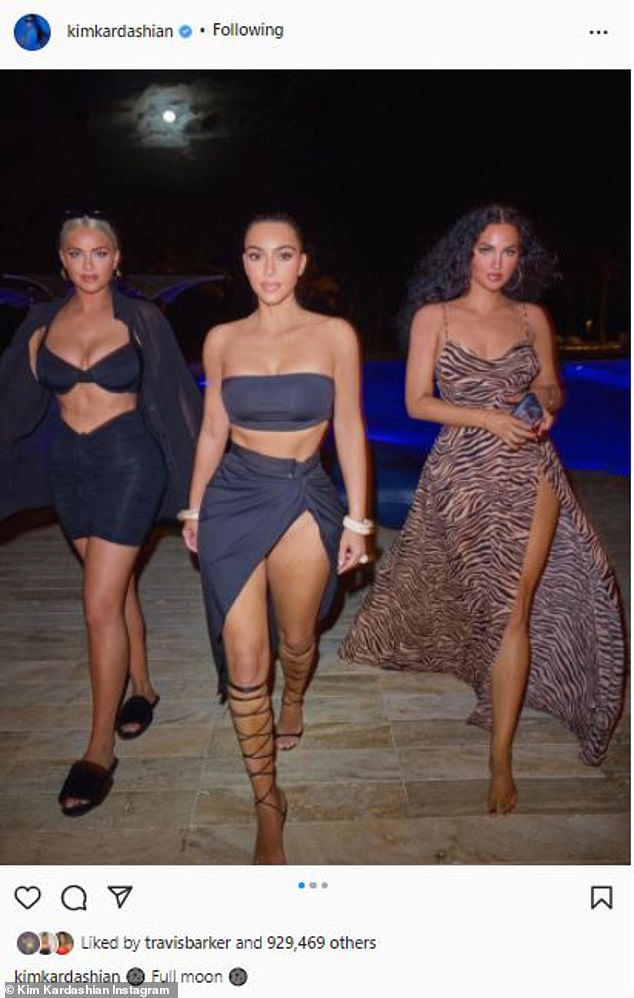 Howling at the moon: Kim Kardashian teamed up with gal pals Olivia Pierson and Natalie Halcro for a photoshoot under the ‘full moon’

The former Keeping Up With The Kardashians star wrote, ‘Full moon,’ in the caption along with a couple of full moon emojis.

In the first photo, the three ladies can be seen walking side-by-side, straight towards the camera.

Kardashian, 41, not only showed off her legs but also gave her 283 million Instagram fans and followers more than a hint of her toned midriff in stylish black skirt and tube top combination.

The skirt attached along the left side of her waist, and was left nearly wide open, for admirers to soak in her legs.

Adding to the sex appeal, she also donned a pair of strapping heels the wound all the way up to just below her knees, and had her long raven tresses pulled back into a ponytail. 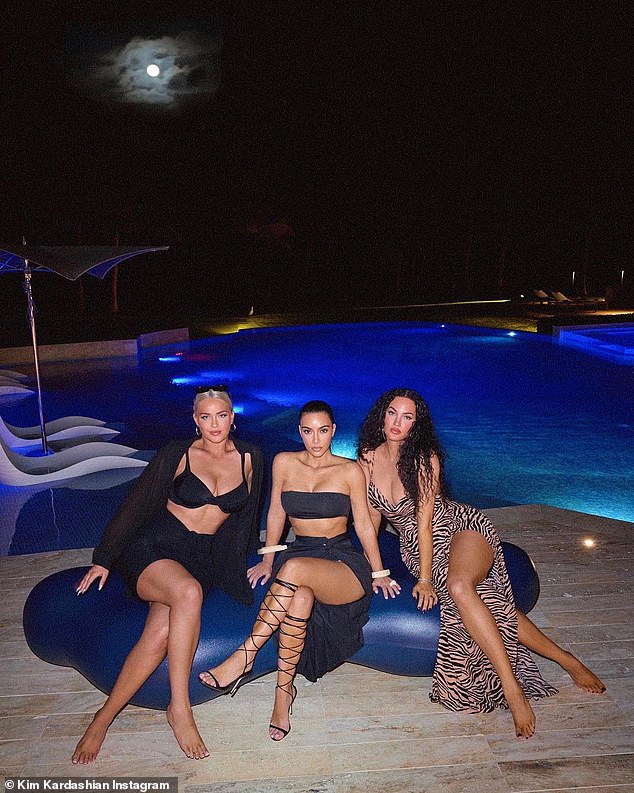 Revealing: The SKIMS co-founder, 41, gave more than a hint of her toned midriff and gams in a stylish black skirt and tube top combination with strappy heels 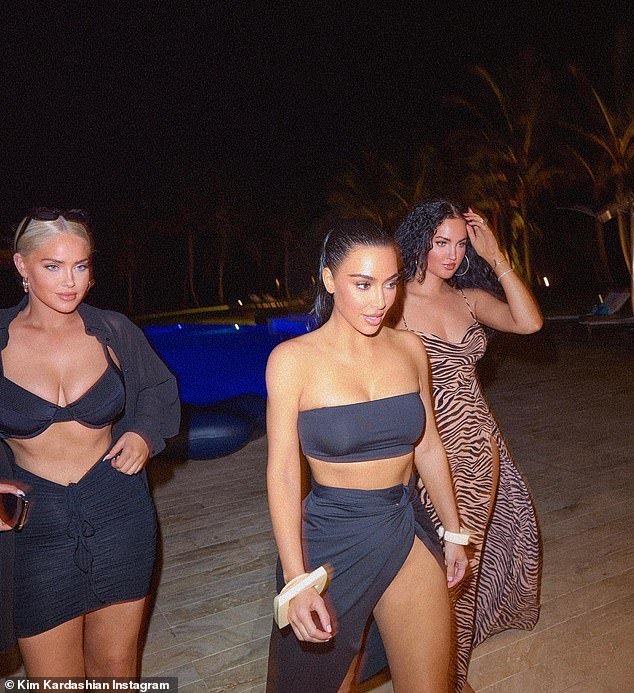 Gams for days: Piersson, 32 went with a black ensemble while her Halcro, 34, got wild in an animal print dress, both of which showcased their legs

Pierson, 32, stood to Kardashian’s right decked out in a miniskirt and bra-like top, and covered up with a matching skirt she left unbuttoned to keep the attention on her womanly curves.

She pulled her platinum blonde tresses back tight into a bun with a part in the middle.

Halcro, 34, was on Kim K’s left in an animal print dress that had a slit on the left allowing her to flaunt her gams at a moments notice.

For the shoot, she went barefoot and had her dark brown locks styled long and wild with plenty of natural curls.

A second photo in the series saw the women sit back together next to the pool with the ‘full moon’ still prominent in the background.

The final image showed them walking to their left, in tandem, like they were making their way out of the pool area, all while still looking chic. 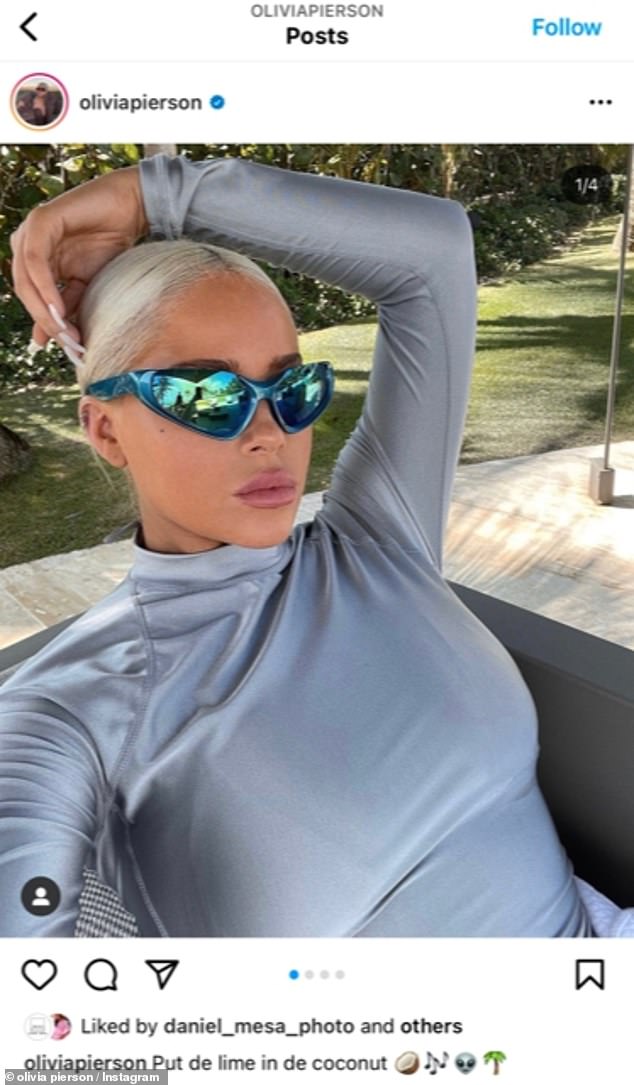 EWorking it: arlier on Saturday, Pierson also took to her Instagram page and shared a series of snap of her own, only these were shot in the daylight 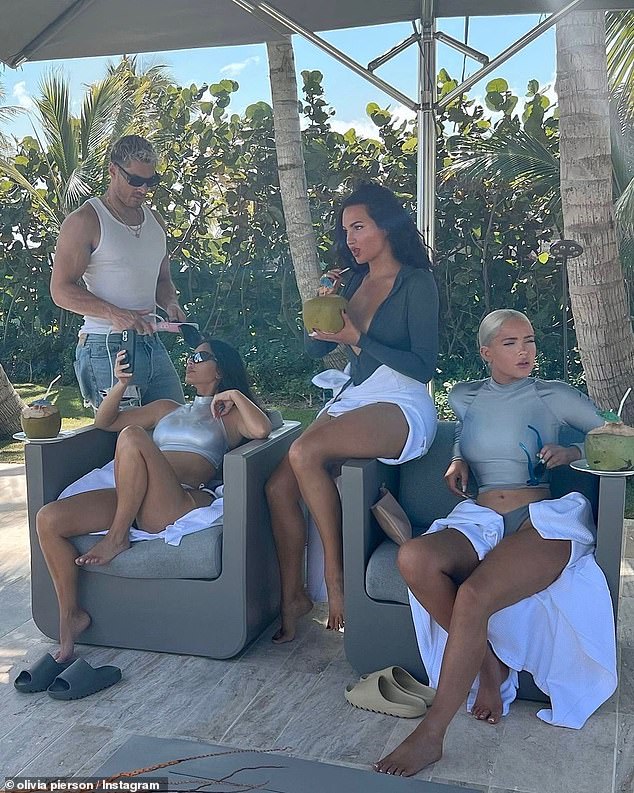 Beach and poolside worthy: Kim K and Halcro teamed up with Pierson in another photo, which showed the ladies in some form of bikini ensembles 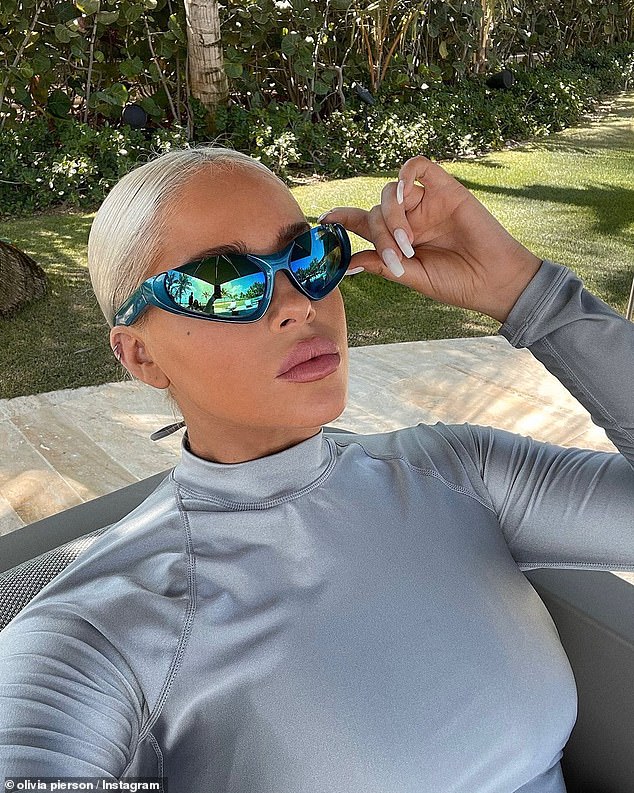 Silver and shiny: The former WAGs LA star struck a pose in a fitted silver top that was worn over a matching bikini

The photoshoot comes amid Kim publicly pushing for estranged husband Kanye West to move on with his life now that he’s dating actress Julia Fox and she’s getting cozy with  SNL’s Pete Davidson.

More recently, TMZ reported that the father to her four children claimed the hip hop legend told ‘everyone within earshot’ that Davidson ‘has AIDS.’

The outlet’s sources close to the rapper have called the latest Kanye drama ‘nonsense’,although there has not been an official denial from the Praise God rapper.

Earlier on Saturday, Pierson also took to her Instagram page and shared a series of snap of her own, only these were shot in the daylight.

‘Put de lime in de coconut,’ she wrote in the caption, which included snaps of the former WAGs LA star striking a pose in a fitted silver top that was worn over a matching bikini. 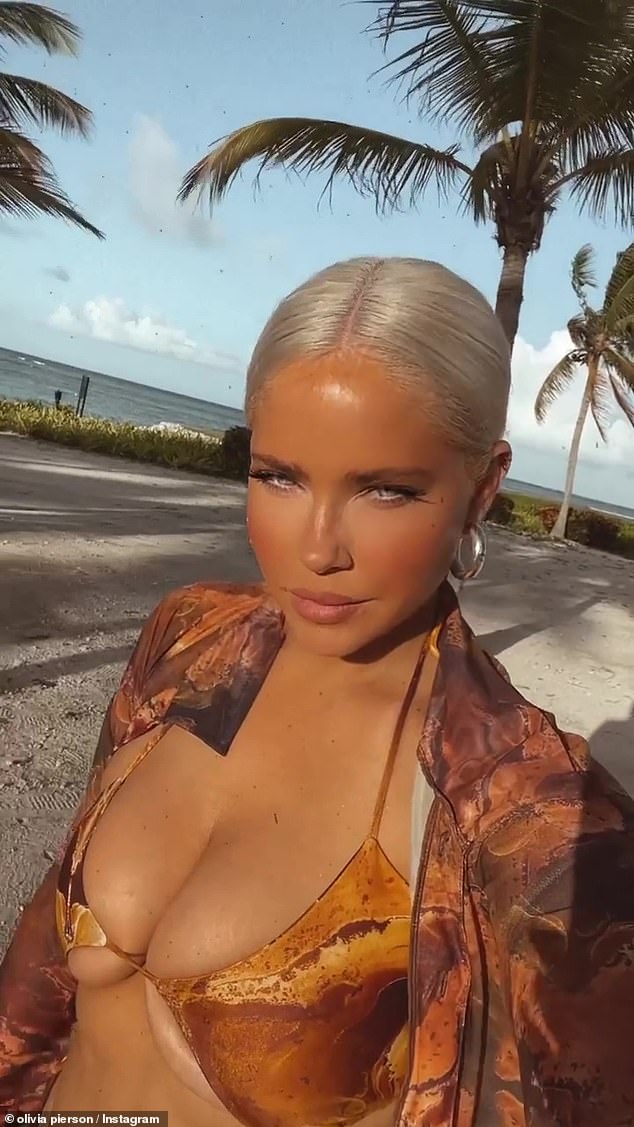 Oceanside view: The previous day, Pierson gave her 3.3 million Instagram fans and followers a glimpse a solo photoshoot by the ocean 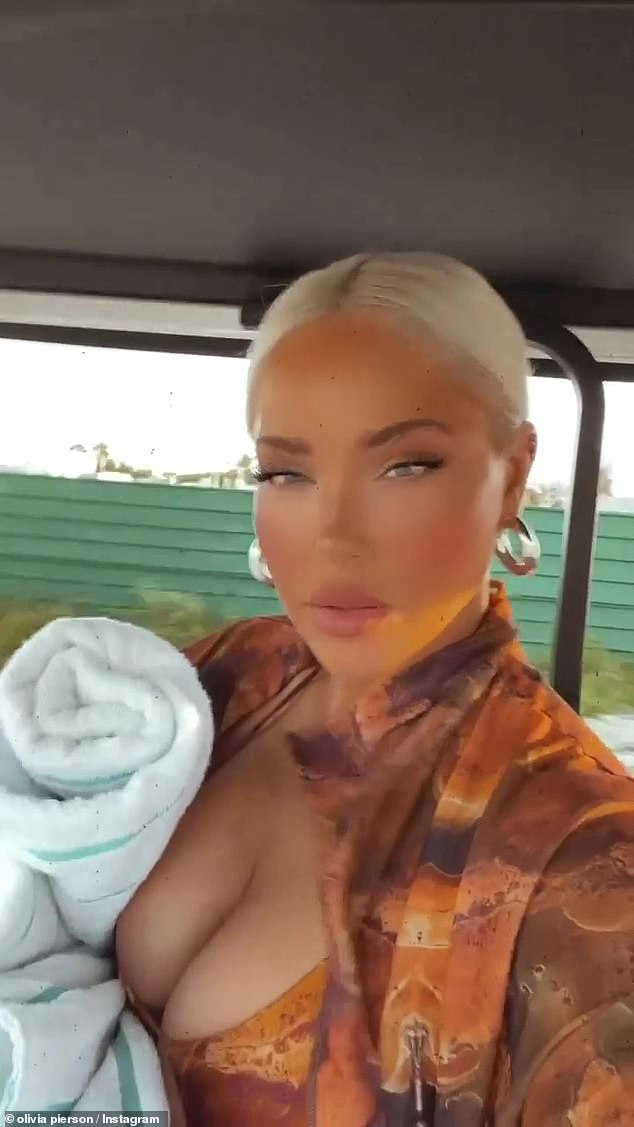 Eyeful: The model flaunted her cleavage in an orange-patterned bikini top

There’s also an image of her with Kardashian and Halcro sitting under an umbrella while enjoying a bit of fun in the sun.

Halcro sat in between her two gal pals as she sipped on a tropical coconut drink dressed in a white and gray outfit.

The previous day, Pierson gave her 3.3 million Instagram fans and followers a glimpse a solo photoshoot by the ocean.

‘Shooting in @junejoyswim. I can’t wait for you to see what we’ve been working on! #junejoyswim,’ she teased in the caption.

After showing off an orange-patterned outfit in the daytime, she also shared some looks of herself with the prominent moon in the backdrop once again.

The social media influencer wore a tan plunging outfit for the nighttime images. 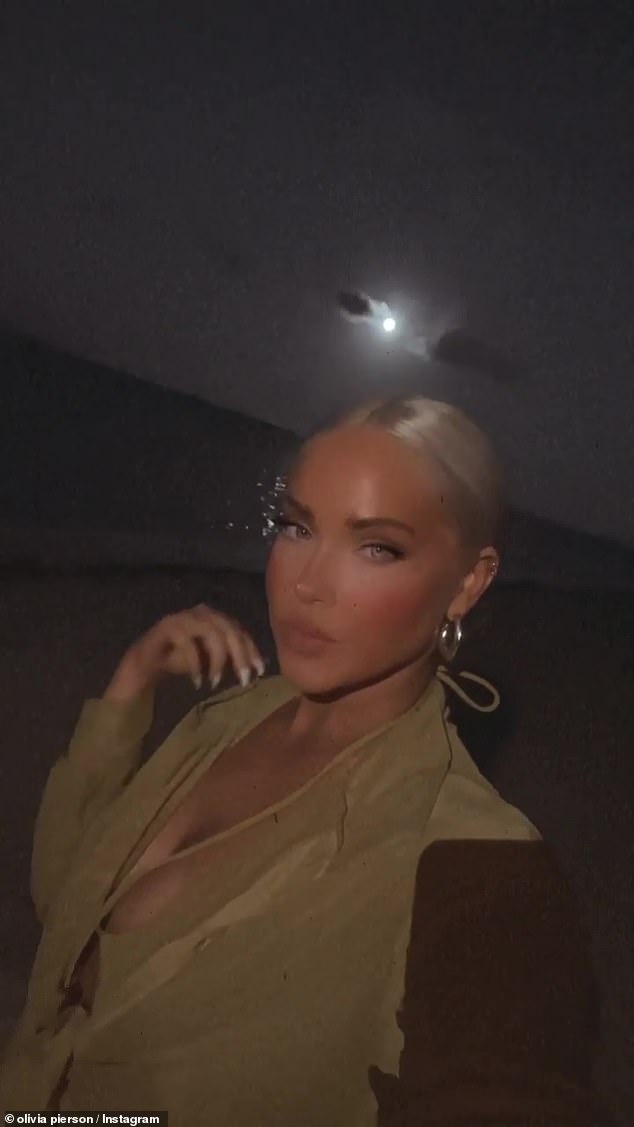 Power of the moon: The model also shared some looks of herself with the prominent moon in the backdrop of the images 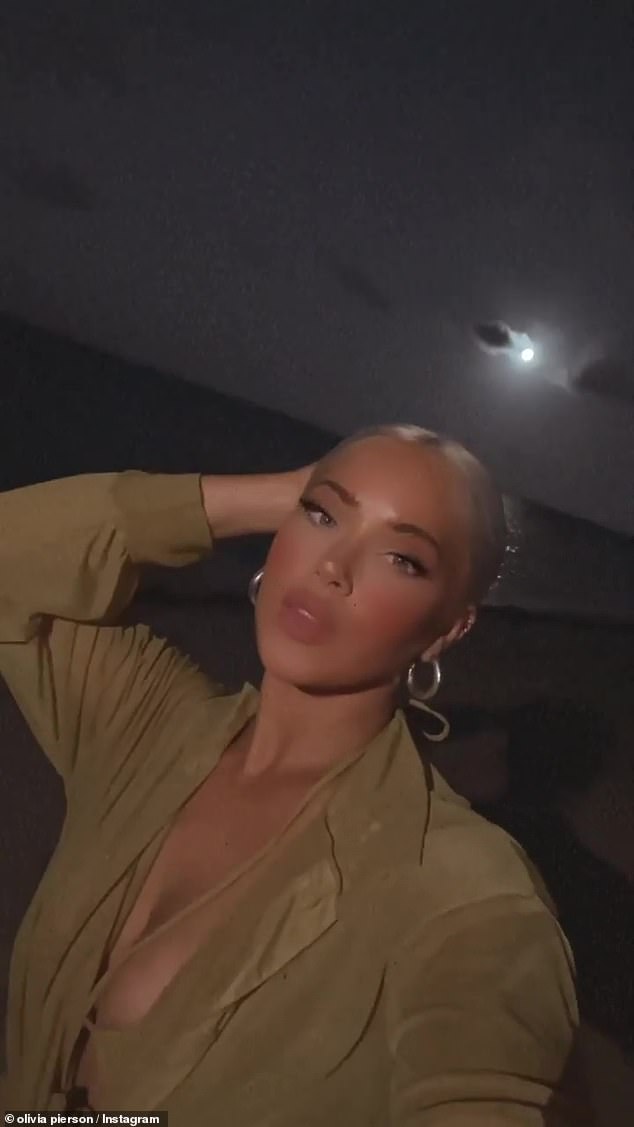 Bark at the moon: The social media influencer wore a tan plunging outfit for the nighttime images