Kim Kardashian is reportedly ‘torn’ over ending her marriage to Kanye West, following their emotional crisis talks at their ranch in Cody, Wyoming.

Following reports that Kim, 39, and Kanye, 43, have been living apart for a year, it has now been claimed that she remains undecided about pulling the plug on the marriage, after ‘feeling like she has tried everything’ to save their six-year union.

A source told People of the mother-of-four: ‘She isn’t getting back what she needs from Kanye. She was to the point that she flew to Cody to basically tell him their marriage is over and to say goodbye.’

Torn: Kim Kardashian is reportedly ‘torn’ over ending her marriage to Kanye West, following their emotional crisis talks at their ranch in Cody, Wyoming. Pictured in November 2019

People reports that musician and fashion designer Kanye is eager to work on their marriage, recently issuing a public apology to her on Twitter after stating during a presidential rally that she contemplated aborting their first daughter North, seven.

However, a source claims the apology is as far as his reparative efforts have gone, explaining: ‘He doesn’t seem to get what she is saying. He hasn’t changed anything that she told him needs to change.’

‘Kim is very torn,’ added the source. ‘The last thing she wants is to be divorced with four kids. She knows that she will be fine financially, but her concerns are the kids and the partnership. She is moving towards a divorce, but who knows if she will actually sign papers.’

Tense reunion: DailyMail.com revealed the couple had reunited in Wyoming on Monday, where they held emotional marriage crisis talks

MailOnline has contacted representatives for Kim Kardashian and Kanye West for comment.

Kanye, who launched a controversial presidential campaign this month, is said to have been based at his $14 million Wyoming ranch this past year, while Kim would visit only once a month with their four children North, seven, Saint, four, Chicago, two, and Psalm, one.

Clearly the distance between the couple has been a source of contention, as during Kanye’s Twitter meltdown last week, he stated: ‘My family must live next to me,’ before adding: ‘It’s not up to E or NBC anymore.’

The rapper appeared to be hinting that he wanted Kim and the kids to be based in Wyoming and not in LA, where she films her E! reality series Keeping Up with the Kardashians.

Visits: Kim, 39, reportedly only visits Kanye in Wyoming once a month with their four children North, seven, Saint, four, Chicago, two, and Psalm, one

He said sorry: Kanye apologised to his wife in a tweet last week after claiming she considered aborting their daughter North, amid reports that he went to hospital to be treated for anxiety

‘Kanye has been in Wyoming for the last year. Kim goes about once every five weeks and brings the kids,’ one source told UsWeekly, adding: ‘they haven’t been spending time together because he moved his life completely to Wyoming and that’s not where their life is, their family is, their kids are in school or the larger family is.’

Meanwhile, it was reported yesterday that Kim has been thinking they ‘need to be apart’ right now, according to PEOPLE.

A source told the outlet: ‘She knows that it’s not healthy for her to be around him now, and it’s honestly not healthy for the kids. He needs to get his stuff together before he can be any sort of partner or father.’

Another report added that Kanye lives ‘full time’ in Wyoming as it is ‘best for his creativity’ according PageSix.

Concerns: Kanye appeared at a campaign rally in South Carolina on July 19 (pictured) in which he delivered a lengthy monologue which sparked concerns about his well-being

Kim is also said to have urged Kanye to quit his bid for presidency, which lead him to a disastrous first campaign rally in North Charleston, South Carolina, where he claimed that he and his wife has considered aborting their first baby, daughter North.

On Tuesday, Kim was seen heading straight back into work mode after her tense reunion with Kanye, as she arrived at a studio in Los Angeles for a photoshoot for her SKIMS range, leaving Kanye behind in Wyoming.

‘Kim feels trapped,’ a source added to People. ‘She loves Kanye and she thinks of him as the love of her life. But she doesn’t know what to do.’

However, multiple outlets have reported that the couple do not want to get divorced.

Yet Kanye is still eager for his presidential bid to become a reality, after making another last-ditch attempt to get on another ballot in Missouri earlier this week, and is said to have hired top political advisers.

Last week, Kim took to Instagram following Kanye’s controversial behaviour, admitting that she was ‘powerless’ amid his meltdown, calling her husband ‘brilliant but complicated’.

The reality star said ‘his words sometimes do not align with his intentions’ after Kanye last night claimed he has been ‘trying to get divorced’ from Kim since she met his fellow rapper Meek Mill at a hotel.

Kanye said last Tuesday that Kim was ‘out of line’ to meet Meek Mill at a hotel in Los Angeles to talk about ‘prison reform’, and blasted her mother Kris Jenner as ‘Kris Jong-Un’ while accusing the pair of ‘white supremacy.’ 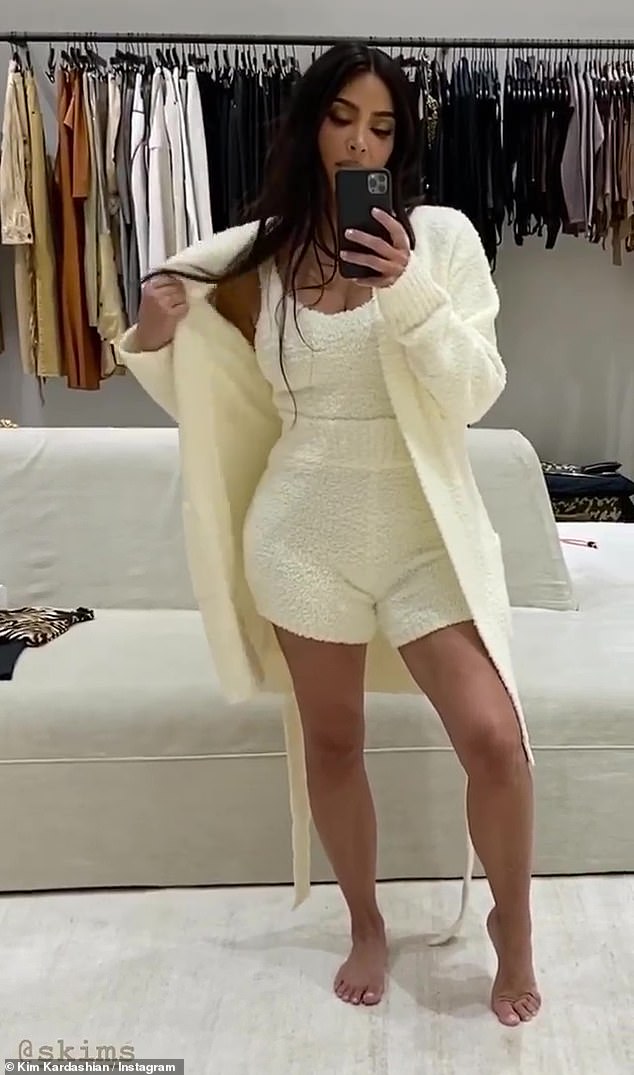 Pose: The reality star and entrepreneur promoted items from her SKIMS line on Thursday night

Passion for fashion: The California native modelled a shorts set that came with a matching bathrobe as she talked fans through the items

However, Kanye apologised to his wife in a tweet last week, amid reports that he went to hospital to be treated for anxiety.

The rapper tweeted: ‘I would like to apologize to my wife Kim for going public with something that was a private matter. I did not cover her like she has covered me.to [sic] Kim I want to say I know I hurt you. Please forgive me. Thank you for always being there for me.’

His apology came after Kim gave a frank and honest statement about the situation to her fans, sharing three pages to her Instagram story last Wednesday saying: ‘Those that understand mental illness or even compulsive behavior know that the family is powerless unless the member is a minor.’

She told her 180 million followers: ‘I understand Kanye is subject to criticism because he is a public figure and his actions at times can cause strong opinions and emotions. 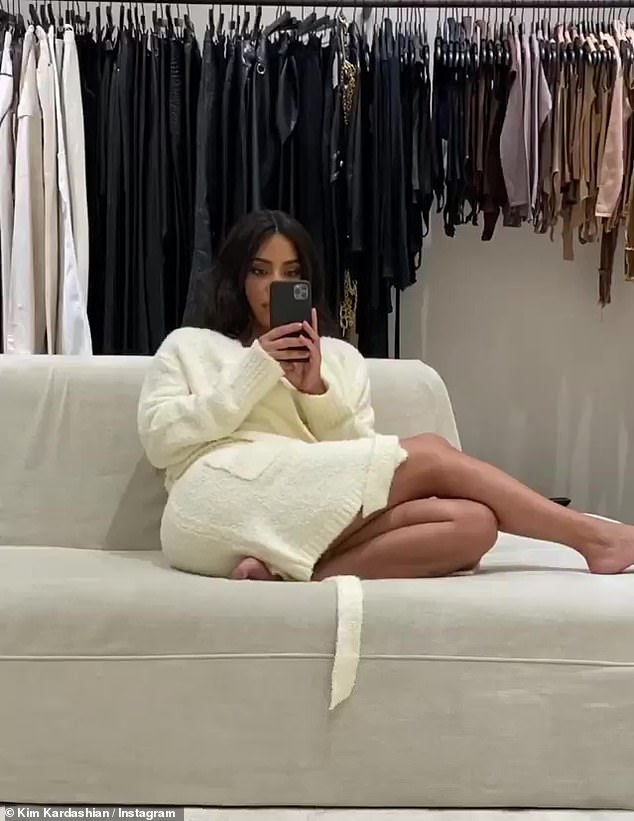 Mirror: The selfie fan, 39, filmed herself in her dressing room mirror as she modelled the pieces

‘He is a brilliant but complicated person who on top of the pressures of being an artist and a black man, who experienced the painful loss of his mother, and has to deal with the pressure and isolation that is heightened by his bi-polar disorder.

Prior to his meltdown on Twitter, Kanye sparked concern during a rambling and chaotic speech at his first presidential rally at North Charleston’s Exquis Event Center in South Carolina.

He shockingly revealed that he and his wife Kim had considered aborting their daughter North, who is now seven, before he got a ‘message from God’.

His unscripted speech, which came two weeks after he announced his unlikely bid for president, is said to have left his wife and her family upset and alarmed. 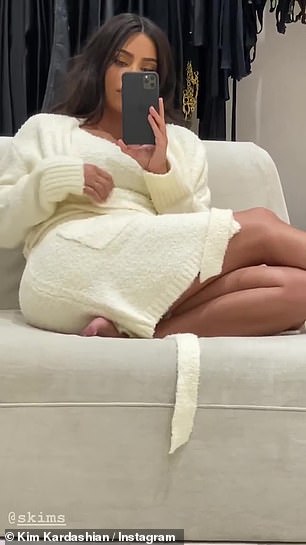 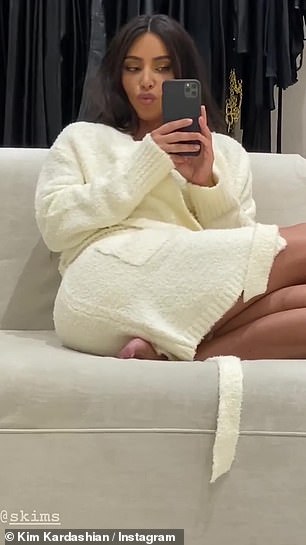 Great body of work: Kim posed up a storm as she promoted the line, which primarily focuses on shape-enhancing undergarments