Kim Kardashian is legally single: Reality star scores court victory in ugly divorce battle with Kanye West after he tried to block her

Kim Kardashian is officially a single woman, even as her divorce from Kanye West continues.

The 41-year-old Keeping Up With The Kardashians star was declared legally single by a judge following Wednesday morning’s court hearing over her divorce from the 44-year-old rapper, according to PA.

The change in her status comes after her ex tried to slow down their divorce by challenging their prenuptial agreement in court. 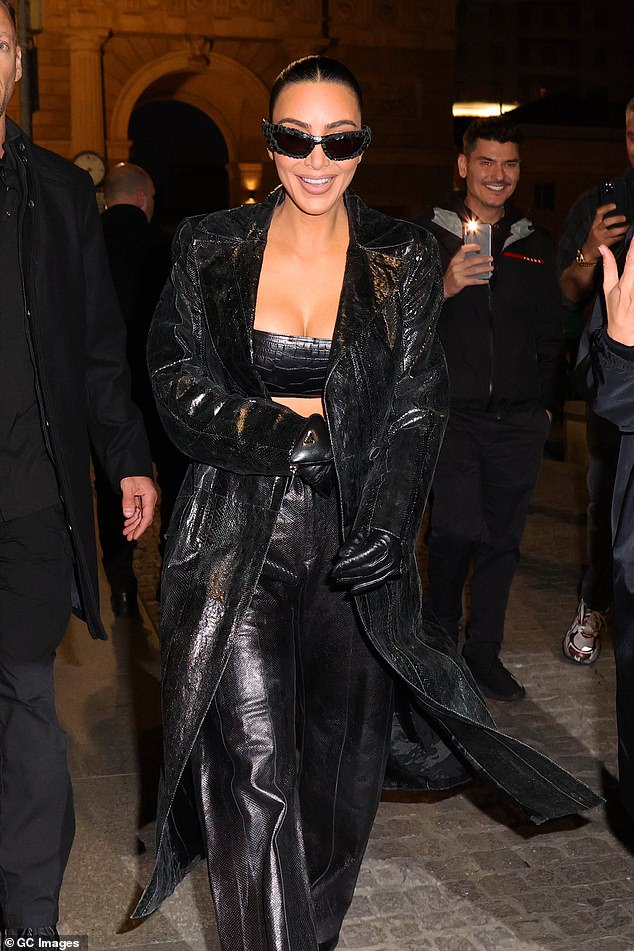 Moving on: Kim Kardashian, 41, was declared legally single by a judge following Wednesday morning’s court hearing over her divorce from the 44-year-old rapper, according to PA; seen February 24 in Milan, Italy

With Kardashian’s new single status comes a change in her name, as she has officially dropped the ‘West’ and legally returned to being Kim Kardashian.

Sources previously told TMZ that West was unlikely to attend the hearing, and he ended up being a no-show.

Kim wasn’t in the courthouse in person, but she did join remotely via a video call.

According to the outlet, the rapper’s attorney didn’t object to Kardashian being declared single, but they did list out his requests before she was declared single.

The judge was amenable to the Flashing Lights rapper’s request that the any money intended to be split between the two would revert to the other ex in case one of the dies. 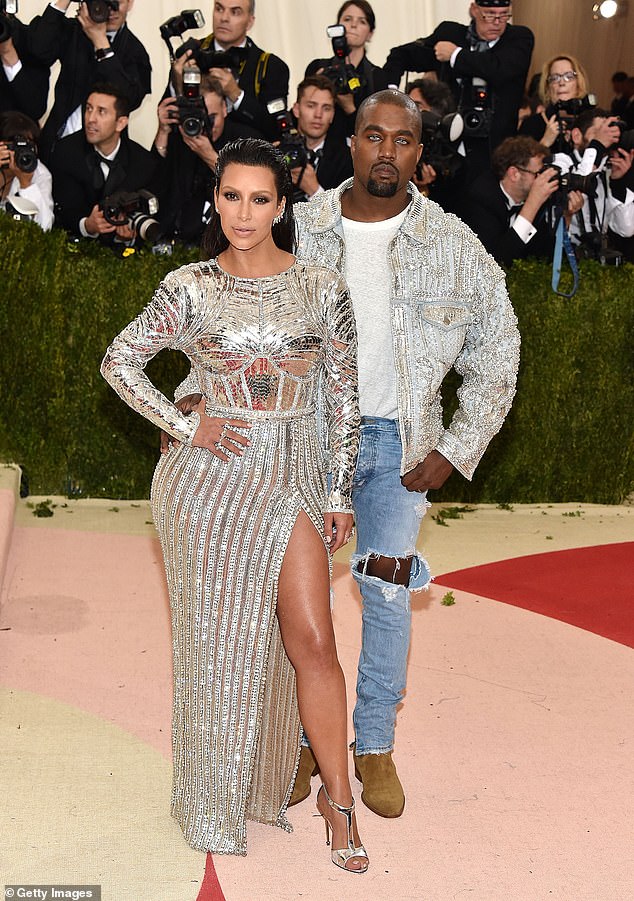 Inevitable: West — who wasn’t present — didn’t object via his attorney, but he asked a judge to let funds meant to be split between the two go to the other partner if one of them dies, which they agreed to; seen in 2016 in NYC

However, the judge rejected West’s other requests about asset transfer and ‘marital privilege.’

The producer had asked the judge to prevent his ex-wife from transferring any assets she had kept in trusts, which they denied.

They also shut down his request for Kardashian to waive her right to have any person she marries in the future be able to refuse to testify about communications they had with her.

Kardashian’s new legal status means that West is also legally single, and a source close to the rapper claimed to TMZ that he also wants the divorce to proceed, though that doesn’t align with his delay tactics in court or his public statements about trying to get his wife back.

Kanye was seen the night before the hearing in Miami, where he met up with Khloé Kardashian’s ex Tristan Thompson for a dinner with multiple other women.

TMZ previously reported that West had fired his fourth divorce attorney, Chris Melcher, prior to the hearing.

The two reportedly had few communications, and the lawyer had trouble coping with the hitmaker’s changing goals, as he went from accepting a divorce to trying to fight it in court. 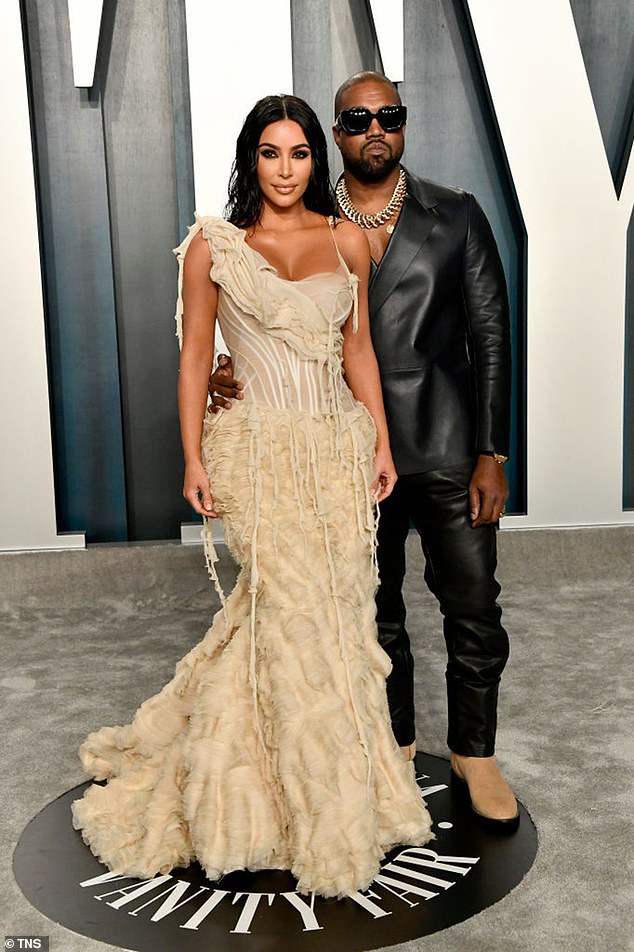 Demands: The judge rejected his request that Kim not transfer assets held in trusts and that she waive the right to have a spouse avoid testifying about conversations with her; seen in 2020

The Donda rapper’s lawyers filed legal documents arguing that all prenuptial agreements signed in California after 2002 are presumed to be invalid, TMZ reported on Tuesday.

The move came after reports of his ex’s plans to ask to be declared single on Wednesday.

‘California premarital agreements entered on or after January 1, 2002, are presumptively invalid,’ West’s lawyers claimed in his filing. ‘The presumption of invalidity exists until rebutted at trial or the parties ratify the agreement. We are in the early stages of the case so no ratification has occurred.’

However, West has not previously claimed that his agreement with Kardashian is invalid.

According to the outlet, California’s law requires one of the spouses to challenge the prenuptial agreement for it to be presumed invalid, but the Monster rapper has not yet done so.

If he were to do so, he would need to prove that the agreement was ‘unconscionable,’ meaning that it was too one-sided, or that either party didn’t agree to it voluntarily. 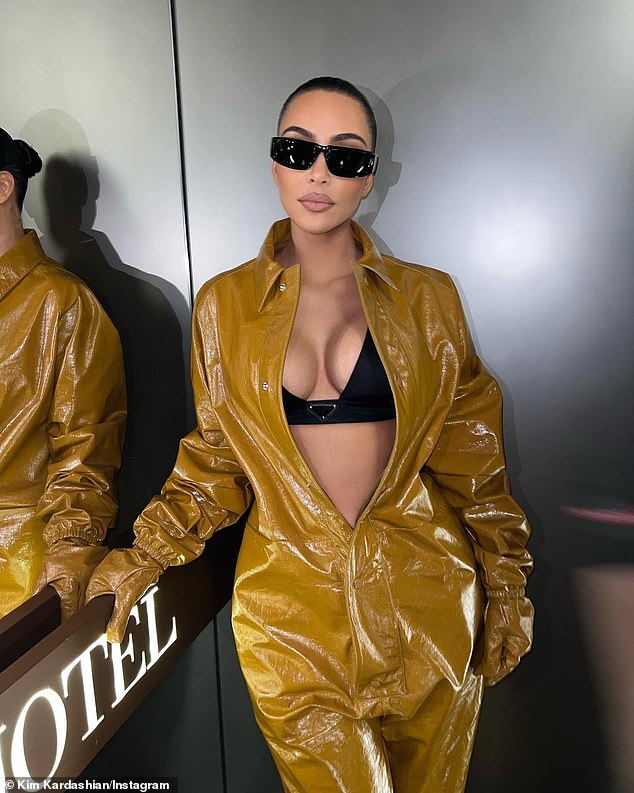 Missing pieces: However, West has not previously claimed that his agreement with Kardashian is invalid. The law requires one party to challenge the document, which West hasn’t yet done

TMZ notes that West had a lawyer representing him when he signed the prenuptial agreement, suggesting that his signature wasn’t involuntary.

The document is also expected to help him retain much of the massive fortune he amassed during his marriage to Kardashian, which comes from several hit albums and his lucrative fashion deals.

West’s ex previously filed documents claiming that his recent social media posts have been riddled with ‘misinformation,’ and she claimed their attacks on her and her boyfriend Pete Davidson have caused her ’emotional distress.’

‘I believe that the court terminating our marital status will help Kanye to accept that our marital relationship is over and to move forward on a better path which will assist us in peacefully co-parenting our children,’ Kardashian wrote in documents filed on February 23, according to Rolling Stone. 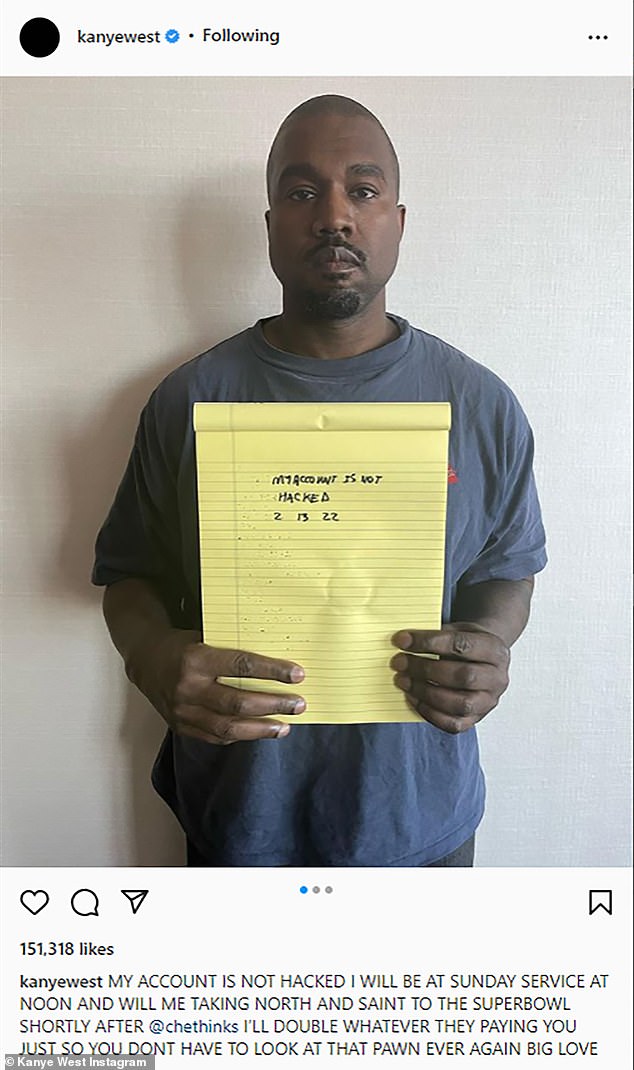 Mixed messages: The rapper filed to have Kardashian’s complaints about his social media posts ruled inadmissible, claiming she hadn’t proved he wrote them, but he previously posted on Instagram that his account was ‘not hacked’

Kardashian is using her estranged husband’s social media posts as an argument for speeding up her transition to single status, but West’s attorneys said she would need to prove he had personally written the posts, though they didn’t appear to explicitly deny that he had written them in their own filings.

Although West’s attorneys appear to be raising doubts about whether he’s responsible for posts on his social media account, he seems to have taken steps in his posts to cast himself as their author.

In a since-deleted Instagram post, the hitmaker shared a photo of himself holding up a yellow notepad that read, ‘My account is not hacked,’ and the date, ‘ 2 13 22.’

The posts caption featured the recognizable breathless all-capitals style that many of West’s recent posts have adhered to. 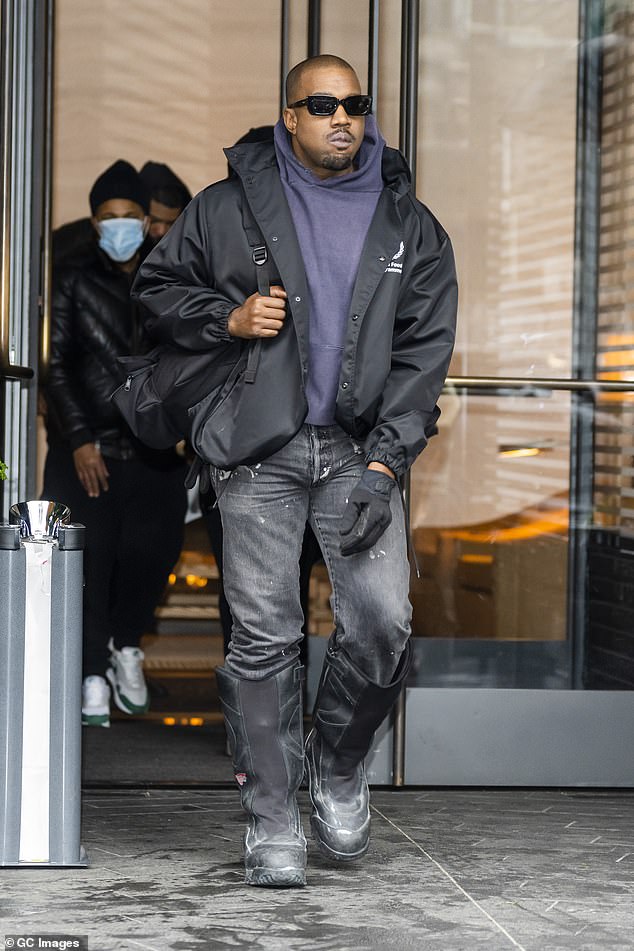 Distanced: Sources claimed to TMZ that the musician and fashion designer has not been working closely with his legal team; seen in January in NYC

‘MY ACCOUNT IS NOT HACKED,’ the post repeated in the caption, before noting that West would be taking his children to Sunday Service, followed by the Super Bowl.

He also included a note to SNL Weekend Update anchor Michael Che offering to pay him double ‘WHATEVER THEY PAYING YOU’ to get him away from cast member Pete Davidson.

Sources claimed to TMZ that the musician and fashion designer has not been working closely with his legal team.

Instead, he made it clear that he didn’t want to divorce Kardashian, but left it up to his attorneys to craft a legal strategy for him, though he now seems to be back on board with a divorce.

Kardashian filed for divorce in February 2021, and the couple initially seemed to be on the same page, but in recent weeks West has taken to attacking her boyfriend on social media. 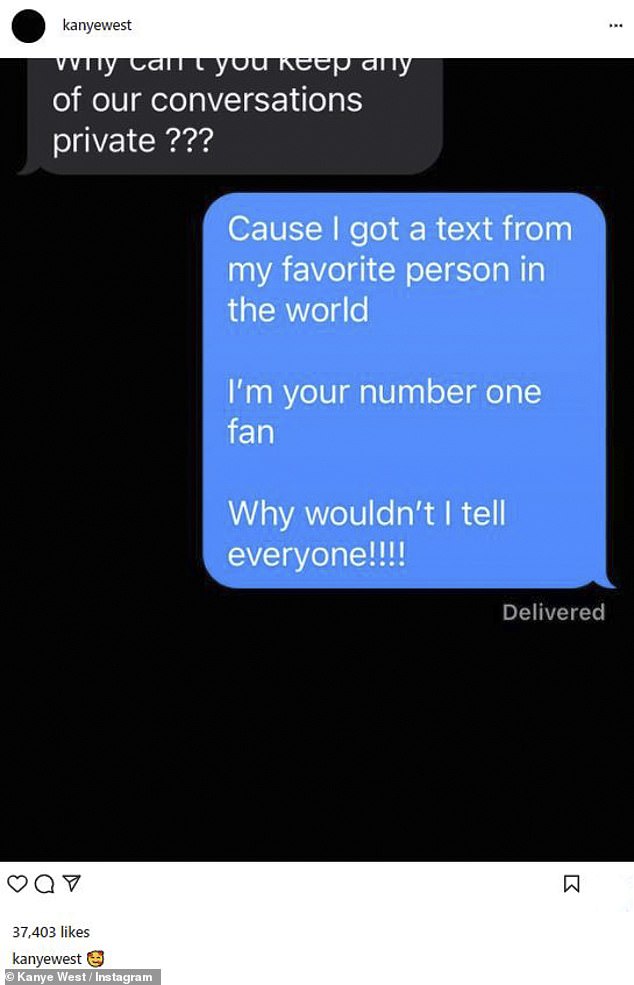 Unrelenting: Kardashian pleaded with him over text: ‘Why can’t you keep any of our conversations private ???’ and he replied: ”Cause I got a text from my favorite person in the world’

He has also repeatedly posted text conversations that appear to be with his estranged wife, including one conversation in which she appeared to write, ‘Why can’t you keep any of our conversations private ???’

‘Cause I got a text from my favorite person in the world,’ he allegedly replied. ‘I’m your number one fan. Why wouldn’t I tell everyone!!!!’

Kardashian doesn’t appear to have any desire to slow down her divorce, but her ex has shared multiple times in public that he hopes to win her back.