Khloe Kardashian posed in a trio of snaps to promote her partnership with fast fashion brand SHEIN.

The 37-year-old reality star was seen modeling a slinky mesh dress adorned with sepia-toned photo portraits while teasing the finale of the #SHEINx100Kchallenge, for which she is serving as a judge.

After announcing her partnership with the Gen-Z beloved Chinese retailer, Khloe incurred much backlash as the brand has been lambasted for knocking off smaller designers and other unethical practices. 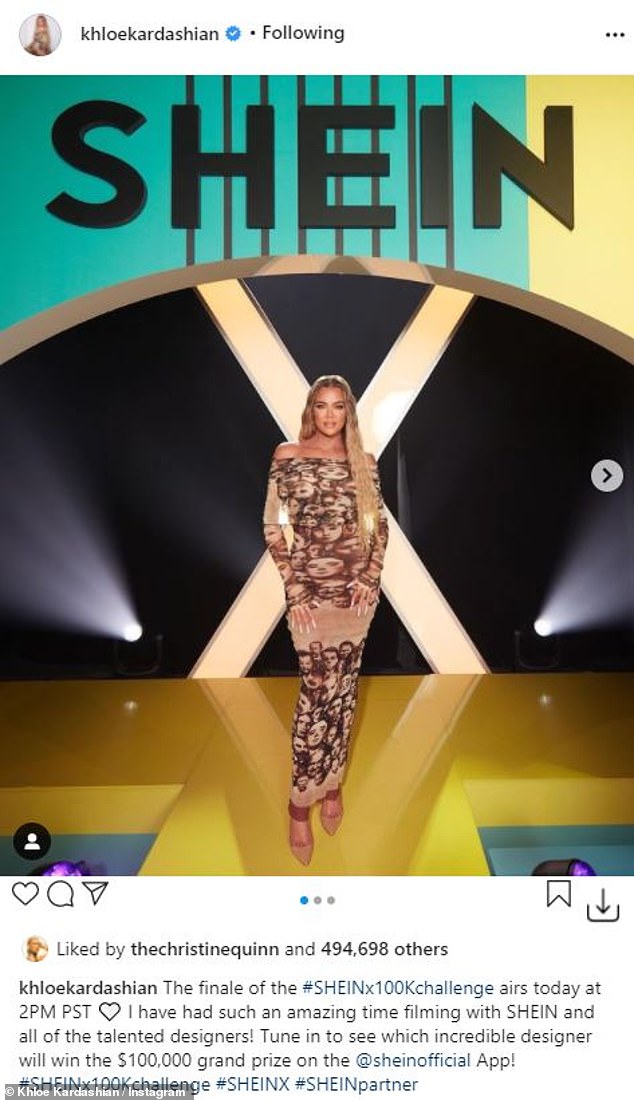 SHEIN: The Good American founder was seen modeling a slinky dress fashioned by the ‘fast fashion’ brand SHEIN as she continues to promote her partnership with them despite backlash

‘The finale of the #SHEINx100Kchallenge airs today at 2PM PST. I have had such an amazing time filming with SHEIN and all of the talented designers! Tune in to see which incredible designer will win the $100,000 grand prize on the @sheinofficial App!’ her posted read.

In a trio of images Khloe modeled a figure hugging gown that fell off the shoulders, while standing in front of a colorful stage fashioned by the brand for the designer challenge.

Her blonde hair was left down in loose mermaid waves with two small braids at the front and she sported expert glam that included a shimmery copper lid.

The project runway-inspired challenge was created in honor of Fashion Week, with emerging designers showcasing their collections virtually in the hopes of winning prize money and having their collection available for purchase on Shein. 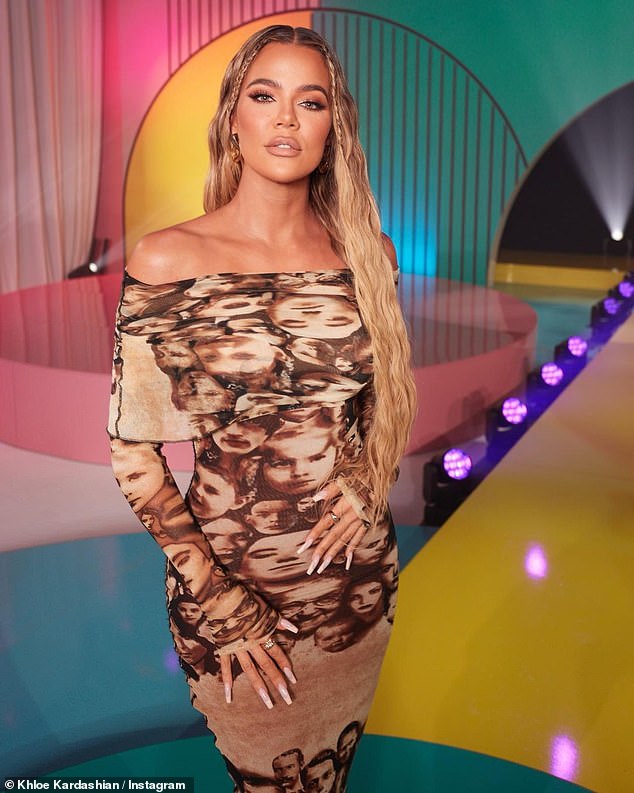 Celebrity judge: She wore a dress adorned with photo portraits while teasing the finale of the #SHEINx100Kchallenge, for which she is serving as a judge 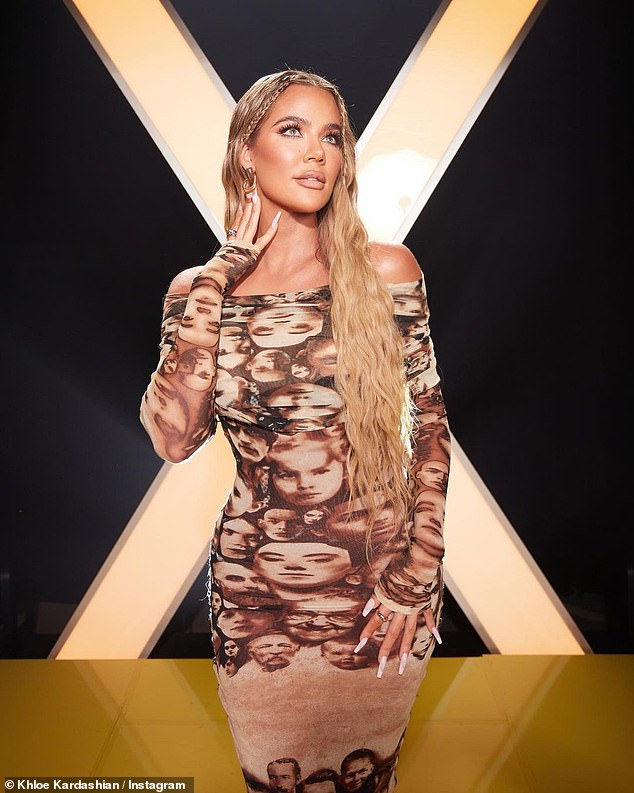 Backlash: First announcing the partnership back in August, Khloe incurred backlash for buddying up with the fast fashion brand whose been dragged for ‘unethical’ practices

When Khloe first announced her involvement in August she was dragged for partnering up with the brand.

It has been known to rip off smaller designers, and also fits the general ‘unethical’ mold of fast fashion, due to its environmental impacts. The site adds nearly 1,000 new pieces to their site daily with a price point of about $10.

‘Is this a joke??? After shein knocks off small designers,’ read one comment.

‘Shein is one of the most unethical fast fashion brands,’ wrote another user, while another comment read: ‘Fast fashion is bad for the environment – not cute.’ 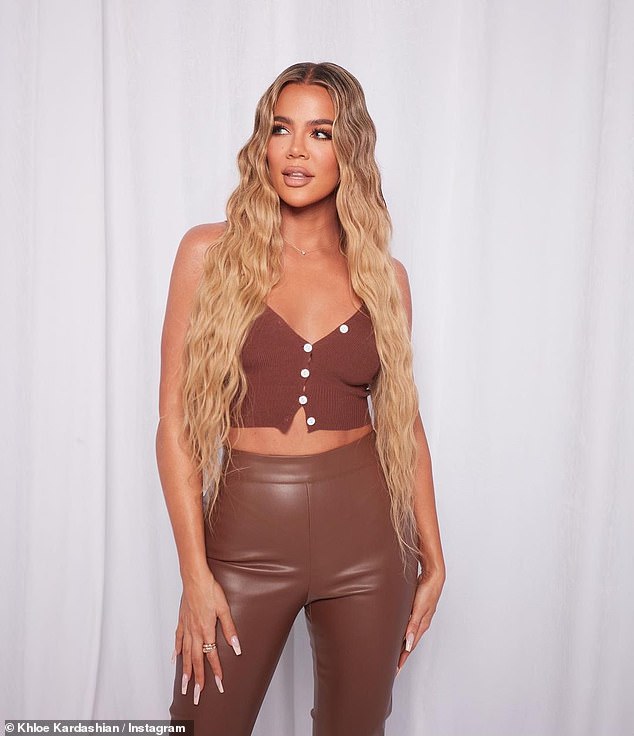 Criticism: The irony of the brand announcing a challenge to support small designers when they have been criticized for ripping off these very artists fueled many of the comments regarding Khloe’s involvement; August 22

Another pointed out the irony of the brand championing a small designer challenge. ‘Lmaooooo Shein supporting small designers?! All they do is rip of small independent designers to make fast fashion tat.’

On Khloe’s most recent post one person wrote ‘not this brand collab the bar has never been lower.’

Roach and Siriano also faced criticism for their involvement in the project.

Siriano said he would be ‘deleting negative comments’ while Roach wrote: ‘My Tribe please just watch this when it airs and you will see why I choose to do this!!! I promise you will be proud of me.’

As Roach — who dresses the likes of Zendaya — continued to promote the finale on his own Instagram, Sunday he also faced more criticism.

More backlash: Roach and Siriano also faced criticism for their involvement in the project

‘This brand is infamous for stealing designs from smaller brands and especially POC designers. I’m having a hard time understanding why you would want any association with them,’ read one comment.

Another user said ‘Unethical to be profiting on clothes made in sweatshops.’

A Shein representative told Page Six Style: ‘Shein takes these issues very seriously and respects the intellectual property rights of artists and designers. We have policies and procedures in place to monitor and swiftly rectify any issues.’

The statement continued to say that the challenge was ‘developed to specifically support small independent talents and give them opportunity to grow their revenue streams, gain exposure, and tap a massive Gen Z audience across the globe.’

Speaking on behalf of the judges it was said that all of them ‘support emerging, small and independent designers.’

The grand prize winner was a woman named Sashagai whose brand is called Flaws Of Couture. Her collection can now be purchased on the site. 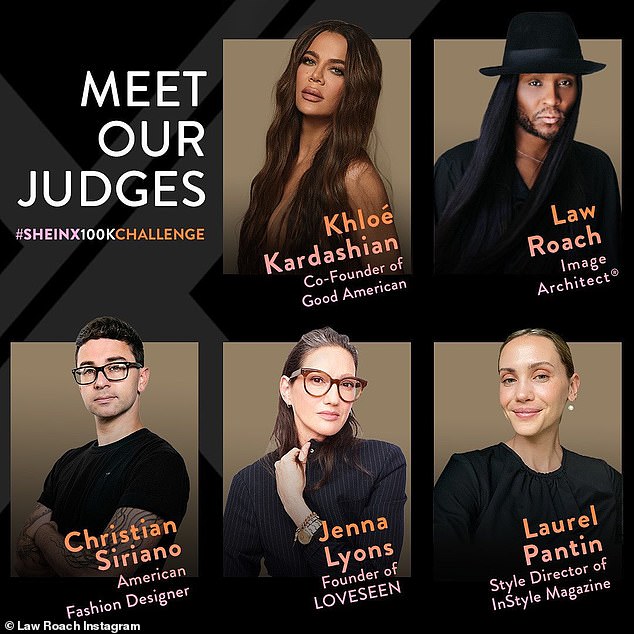