She joined X-rated site OnlyFans back in May and has been wowing fans with her sizzling snaps.

And Kerry Katona displayed her eye-popping frame as she stripped down to a bikini for a staycation with beau Ryan Mahoney at the Beach Sun Retreat in Dymchurch on Friday.

The former Atomic Kitten star, 39, was oozing confidence after her two stone weight loss as she relaxed on a sunlounger with Ryan, 31, and drank champagne. 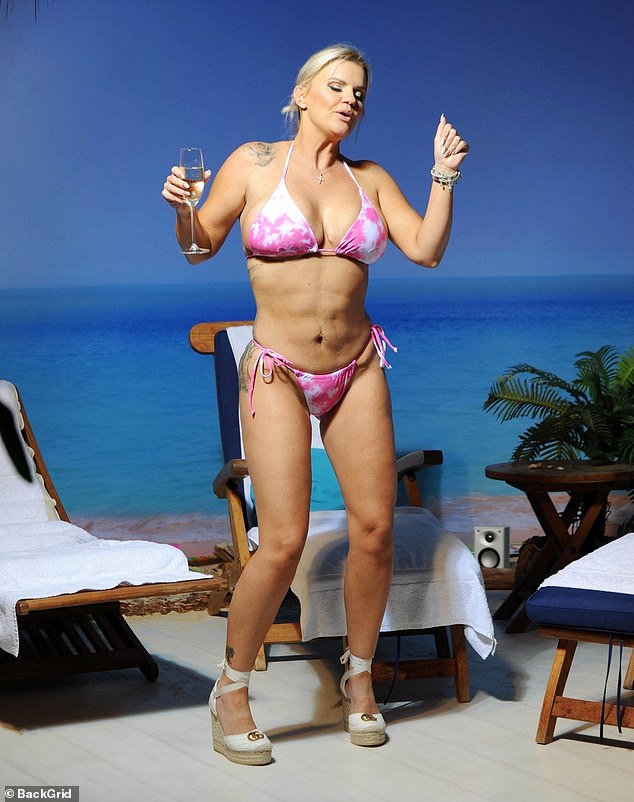 Good trip? Kerry Katona displayed her eye-popping frame as she stripped down to a bikini for a staycation with beau Ryan Mahoney at the Beach Sun Retreat in Dymchurch on Friday 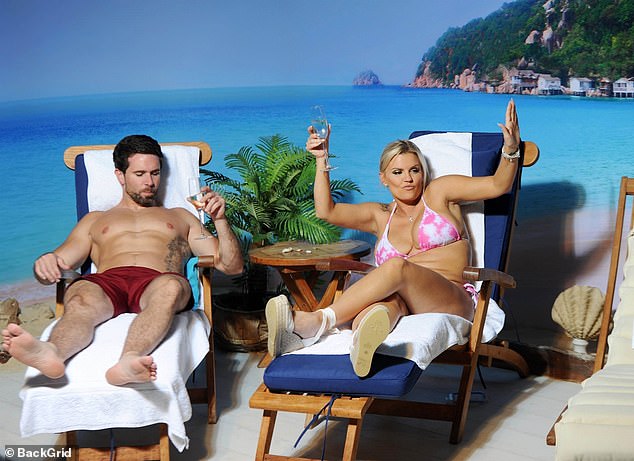 Dance: The former Atomic Kitten star, 39, was oozing confidence after her two stone weight loss as she relaxed on a sunlounger with Ryan and drank champagne, before going topless in jaw-dropping snaps

The mother of five wowed as she donned a pink and white tie-dyed bikini, with the top barely able to contain her assets.

Kerry displayed her taut midriff as she danced at the retreat while holding a flute of bubbly.

A pair of tie-side bikini bottoms rested high on her hips, displaying her tattooed legs. 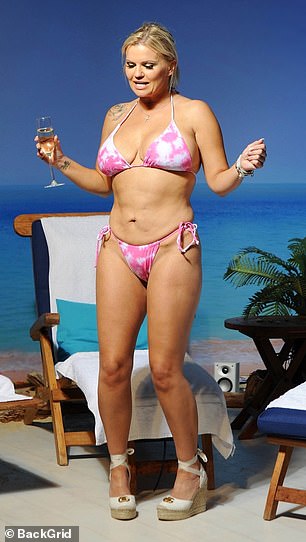 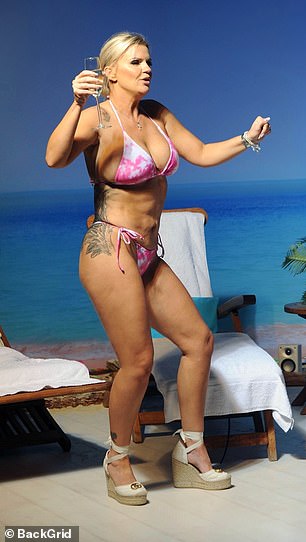 Dance: Kerry channeled her girlband days as she danced up a storm in the two piece 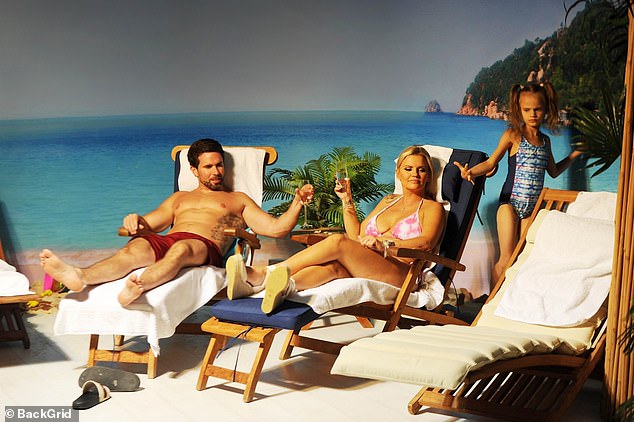 Fun in the fake sun: Kerry and Ryan sipped champagne as her daughter Dylan-Jorge, six larked about 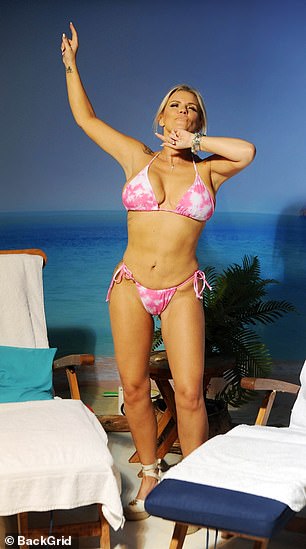 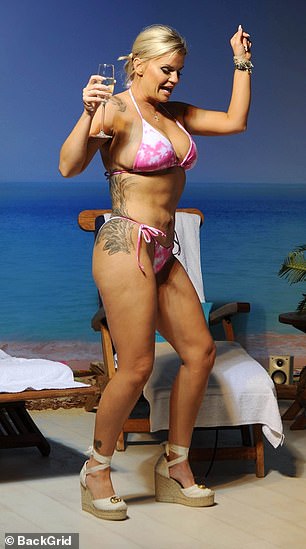 Animated: Kerry appeared to be singing along as she showcased her bikini body 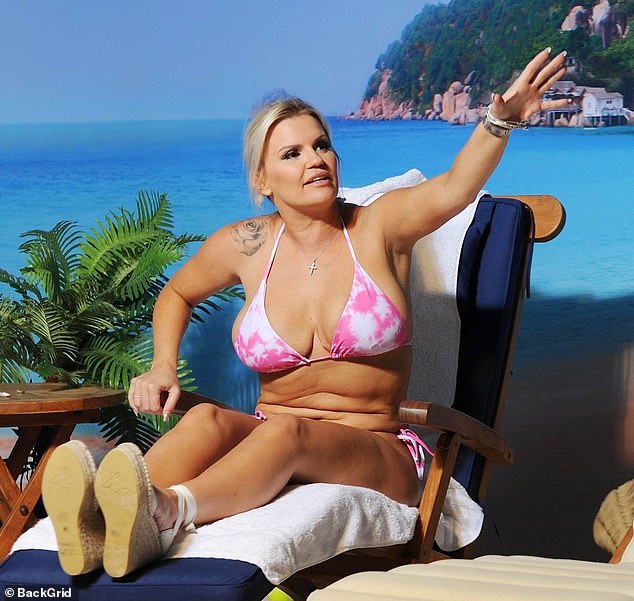 Hey: The star appeared to call out to someone as she relaxed on the sunlounger 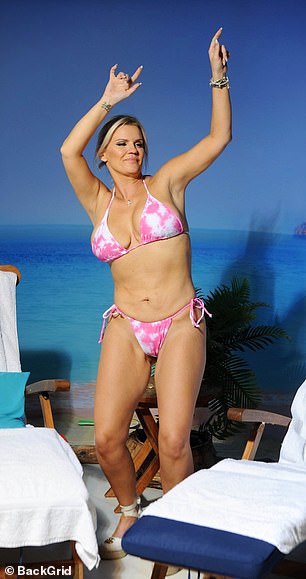 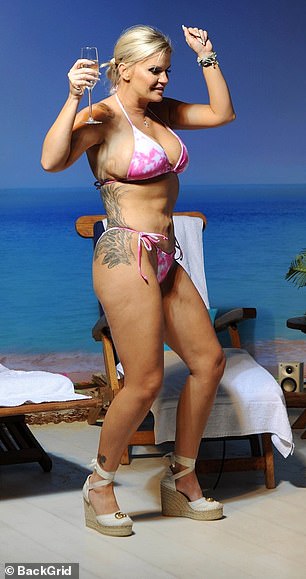 Moves: Kerry shimmied for the camera as she enjoyed herself on the day 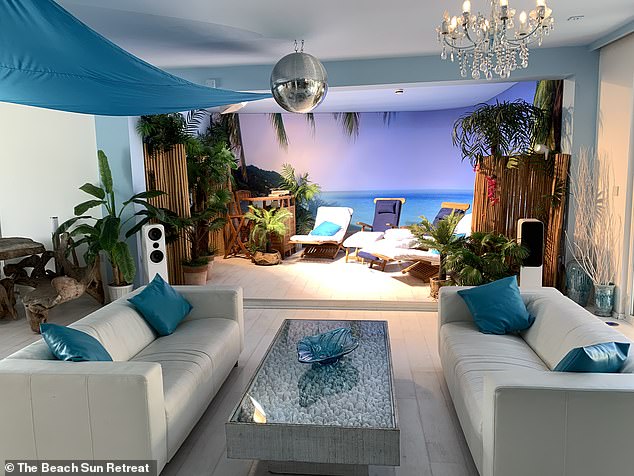 Grand: The Beach Sun Retreat is ideal for a relaxing ‘staycation’ with sunbeds set up to mimic the relaxing space by the sea 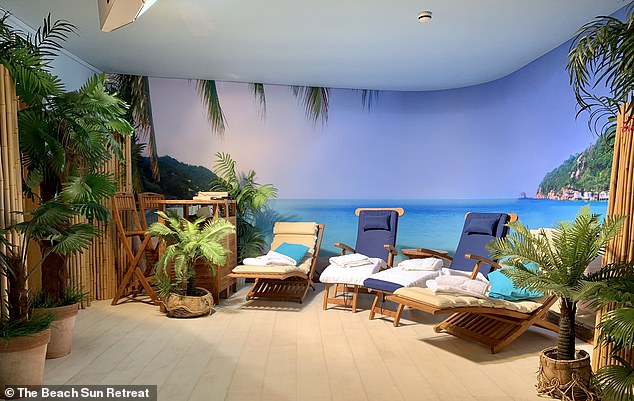 Picturesque: The cosy setting is the ideal way to bring the Caribbean to the UK in the midst of the COVID-19 pandemic

The bottoms cut high at the rear and revealed the star’s pert derriere.

Her blonde tresses were pulled into a chic updo while smoky shadow, fluttery lashes and nude gloss adorned her visage.

Ryan displayed his hunky frame in a pair of scarlet swimming trunks as he toasted with Kerry. 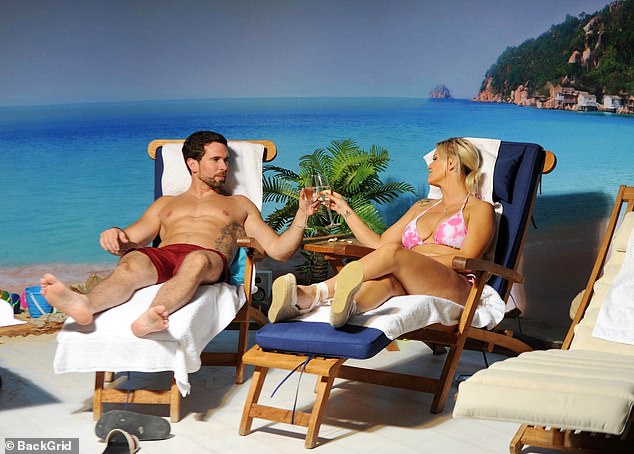 Cheers to us: Kerry and Ryan looked into one another’s eyes as they toasted 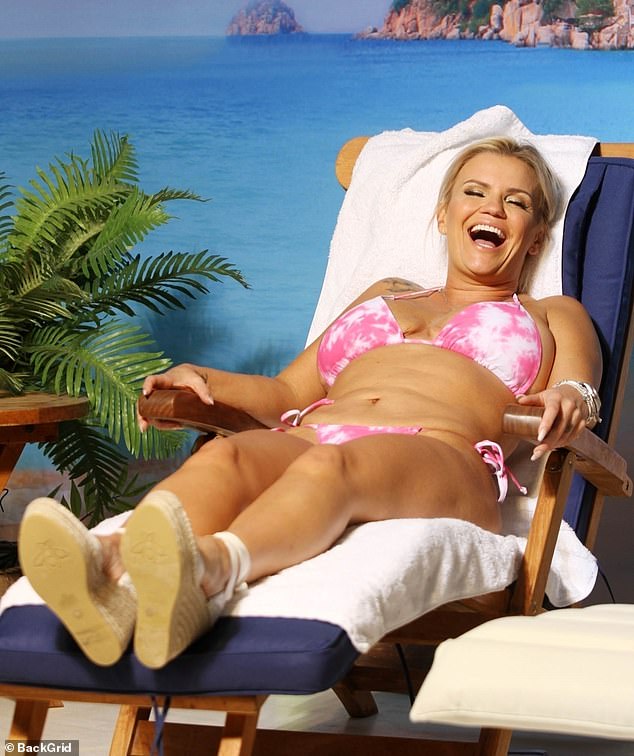 Laugh out loud: Kerry looked sensational as she displayed her toned bikini body 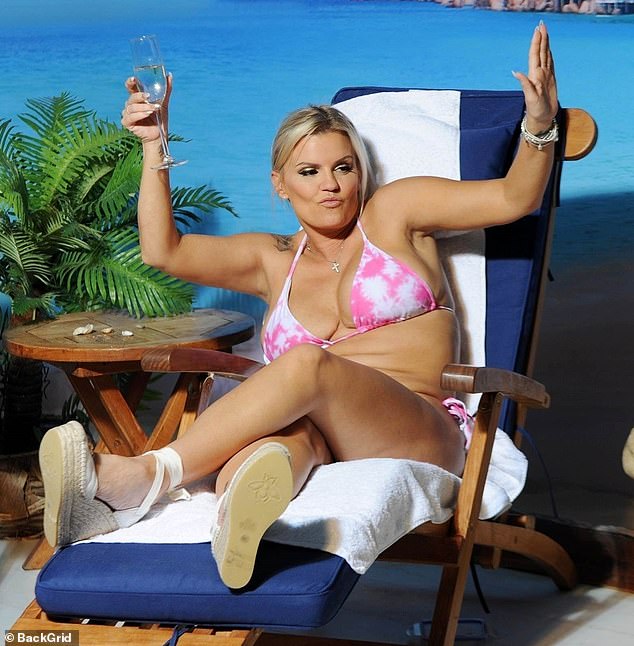 Moves: The star looked in good spirits as she danced to some music 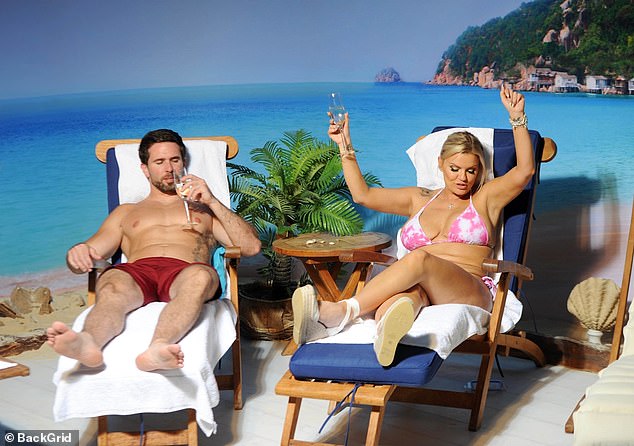 Relax: The couple kicked back and relaxed on a day of leisure 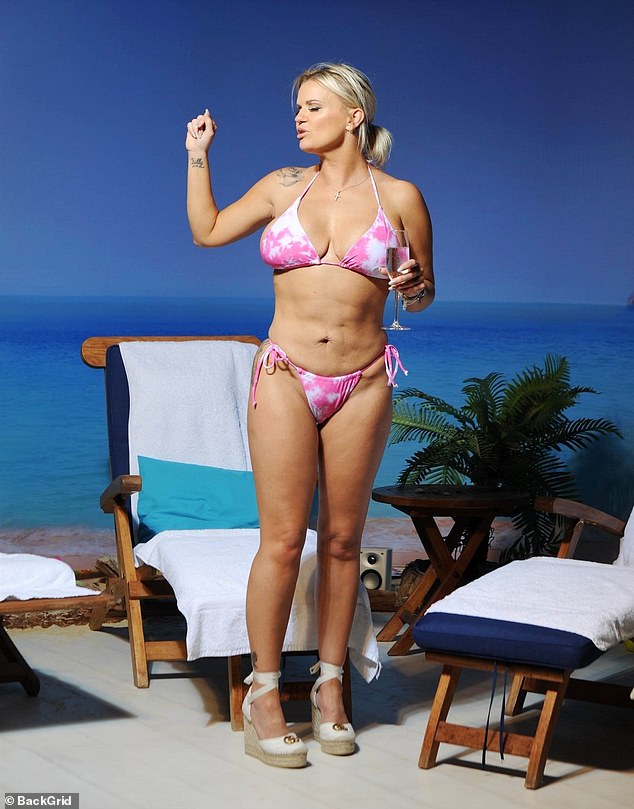 Go for it: Kerry revealed her honed legs as she belted out a tune by the sunlounger

The couple lay on sunloungers set against a beach backdrop complete with greenery as they enjoyed the staycation amid the COVID-19 pandemic.

Kerry took to Instagram back in May to announce she was joining X-rated site OnlyFans.

Sharing a racy snap of herself wearing black sheer underwear, Kerry penned: ‘Finally got round to signing up to @onlyfansofficial! Looking forward to getting started link in bio.’

Fellow OnlyFans member and mother-of-four Danielle, 36, was quick to share her own advice on how to navigate the X-rated subscription site. 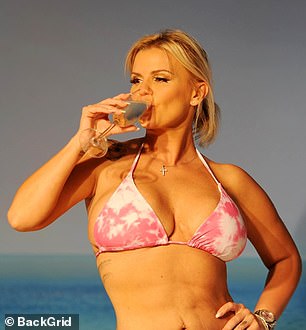 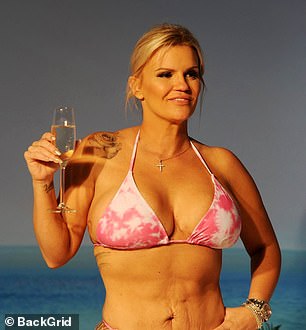 Strike a pose: Kerry sipped on some bubbly as she revealed her glowing tan 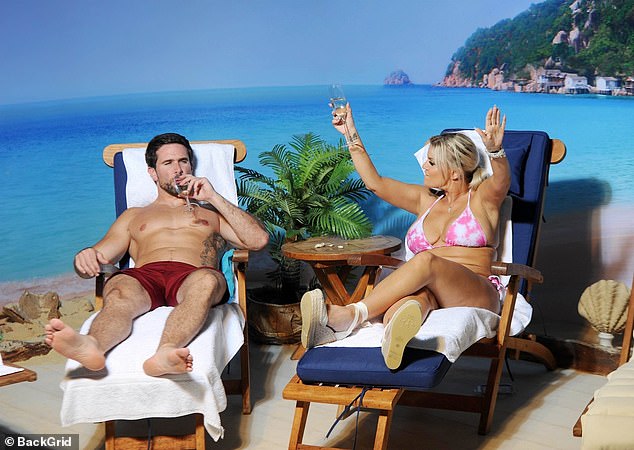 Yay: Kerry looked delighted as she sang and danced while Ryan enjoyed a drink 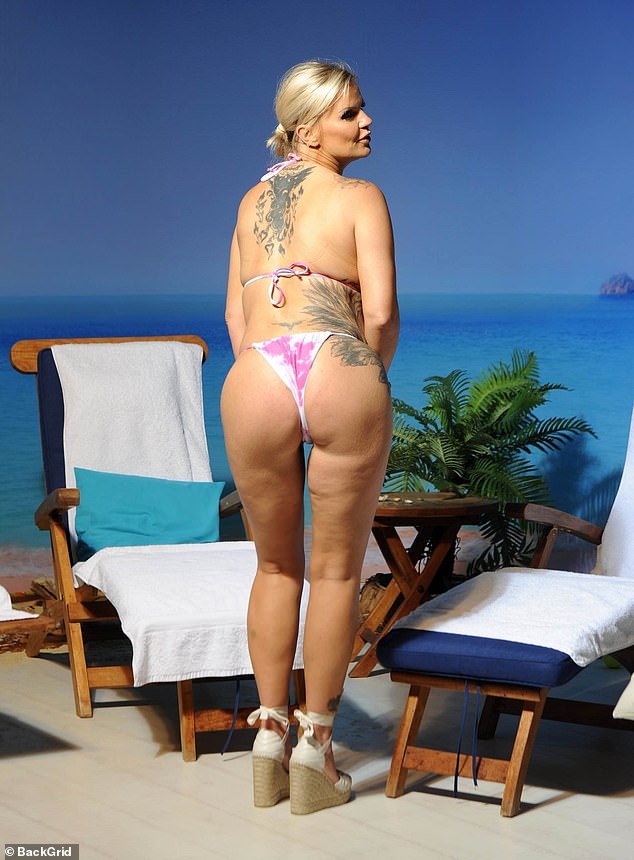 Cheeky: Kerry displayed her pert posterior as she posed up a storm

She commented: ‘F**k what people say Kerry as long as your happy and it’s good for your confidence good luck,’ followed by a rejoicing hand emoji.

To which Kerry replied: ‘[100 emoji] babe…. I do photo shoots this all the time for the papers and mags but now I’m in control! And I’m loving it thanks for your help babe.’

Writing a short bio underneath her account, Kerry penned: ‘Everyone insisted I got an account so here I am! Former glamour model and hit singer. Love working out and keeping in shape.’

Meanwhile Danielle revealed last year that she had launched an OnlyFans account, offering fans a chance to purchase saucy topless snaps of herself for £115. 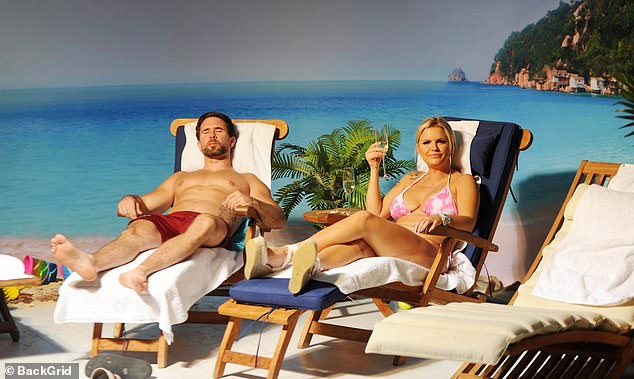 Catching some rays: The couple looked delighted as they posed by a beach backdrop 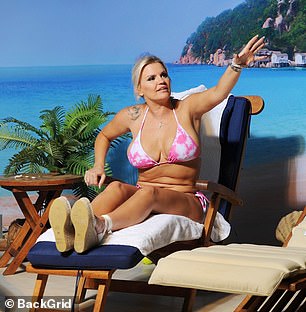 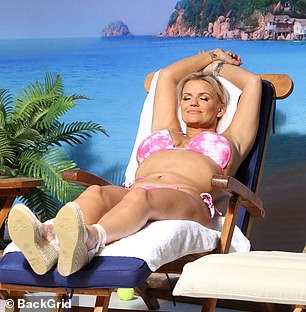 Glow: Kerry looked glamorous as she relaxed and posed during the shoot 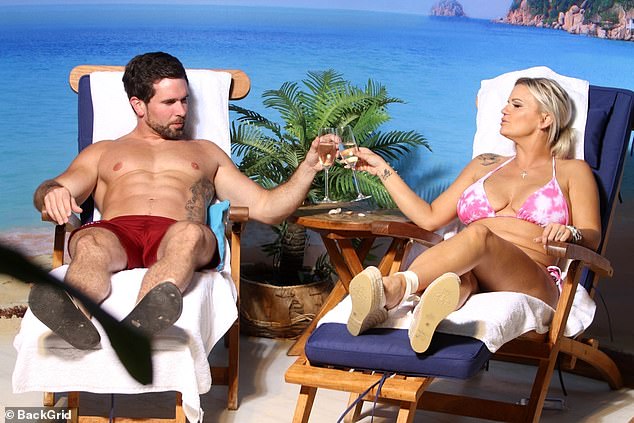 Toast: The couple looked smitten as they toasted while sunbathing

The CBB star is said to have began the subscription service in October after plastic surgery made her feel ‘womanly again’. She underwent a breast augmentation, liposuction and a Brazilian bum lift.

Only recently, Kerry overhauled her diet and fitness routine, she has been proudly showing off the results of her hard work and two stone weight loss on social media.

The singer has been open about how she uses SkinnyJab – a weight loss injection to suppress appetite – to maintain her slim physique,  something she has been criticised for.

The singer also has Heidi, 13, and Maxwell, 12, with ex-husband Mark Croft and Dylan-Jorge, six, with late ex-husband George Kay.

Kerry is currently loved-up with boyfriend Ryan after rekindling their romance in 2018.

She branded the hunk a ‘godsend’ in her column for new! magazine as he supported her following the death of her ex-husband George in July last year. 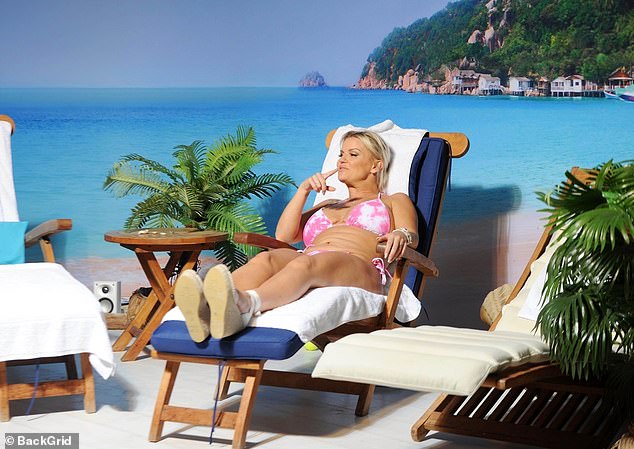 Sizzling: Kerry took to Instagram back in May to announce she was joining X-rated site OnlyFans