Kendall Jenner is the top American supermodel and she proved why with two new photos shared to her 200M followers.

The 26-year-old pinup looked incredibly toned as she modeled a bra top that flashed her abs for the brand Alo.

This comes after the daughter of Kris Jenner was seen storming off during a lunch meeting with her family in the first official trailer for the Hulu series The Kardashians which debuts in April. 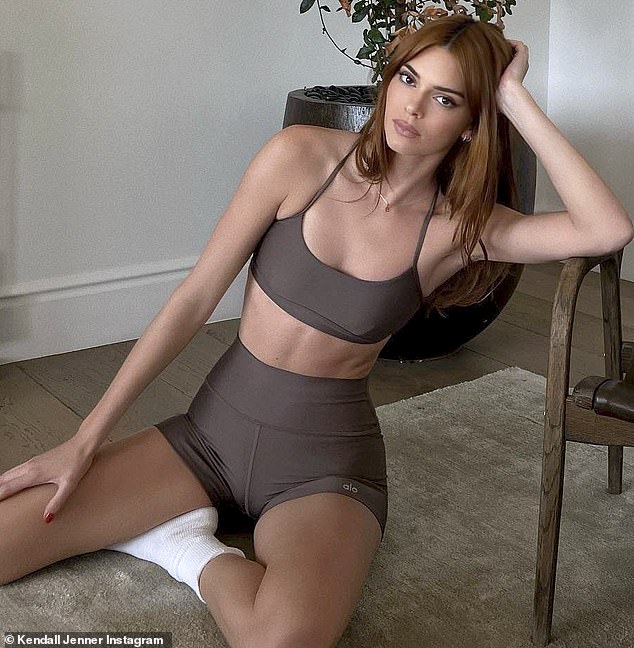 Yoga ready: Kendall Jenner looked incredibly toned as she modeled a bra top that flashed her abs for the brand Alo. The images were shared to Instagram on Wednesday 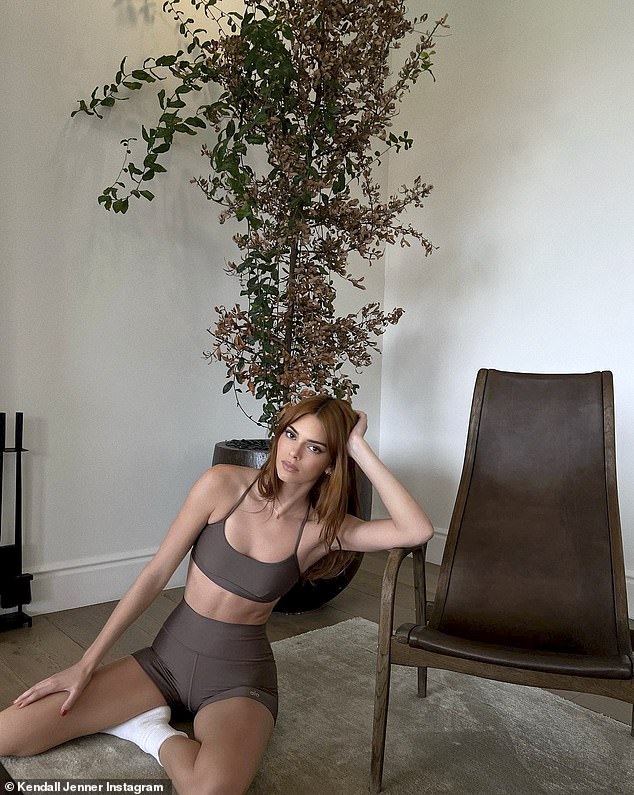 At rest but at work: The star looked incredibly toned with a deep California tan as she sat in a living room in the new Alo images 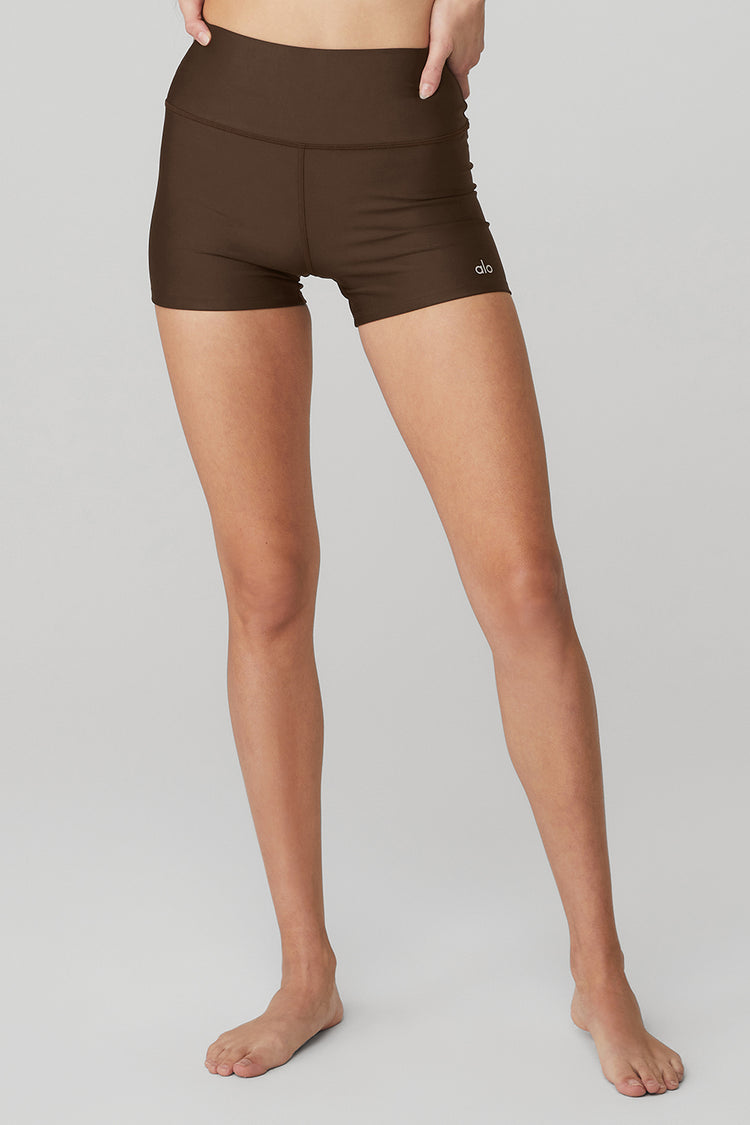 Kendall appeared fit with a deep California tan as she sat in a living room in the new Alo images.

The bra top was light on fabric as it flashed her chest and tummy. She added matching shorts and white socks.

The TV star was heavily made up with black eyeliner and mauve lipstick as she wore her reddish dyed hair down.

There was also an image where her legs, bottom and chest were on display, but her head was out of frame.

Jenner has been a brand ambassador for yoga wear brand Alo since November 2021 and has even gotten her sister Kylie, and her pals Gigi Hadid and Hailey Bieber to collaborate with her. 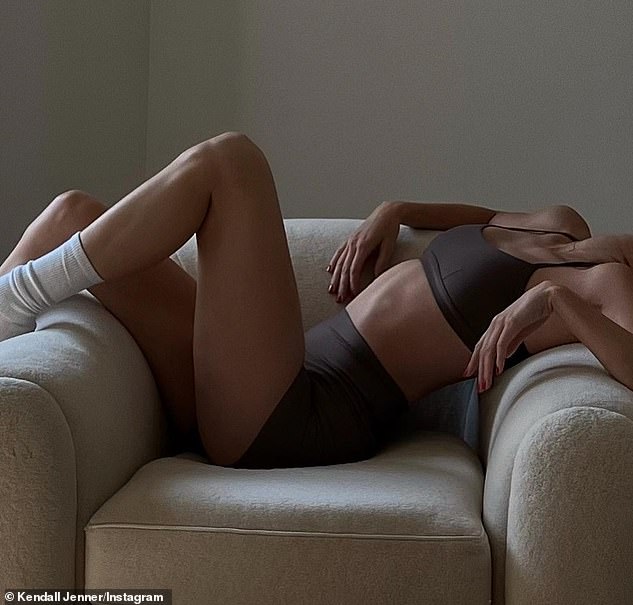 A closer look: There was also an image where her legs, bottom and chest were on display, but her head was out of frame

Kendall appeared in a closeup photo with the top of her head cut off, which highlighted the high-waisted and matching bra top while she continued to lean against the chair.

Her sister Kourtney Kardashian’s former partner Scott Disick appeared to have been present during her Alo photoshoot, as he shared a behind-the-scenes image to his Instagram Stories later in the day.

‘Photo shoot 4 no reason,’ he captioned a photo of Kendall lying on her side on a cream-colored sofa while resting her head on her hand and rocking a soft smile. 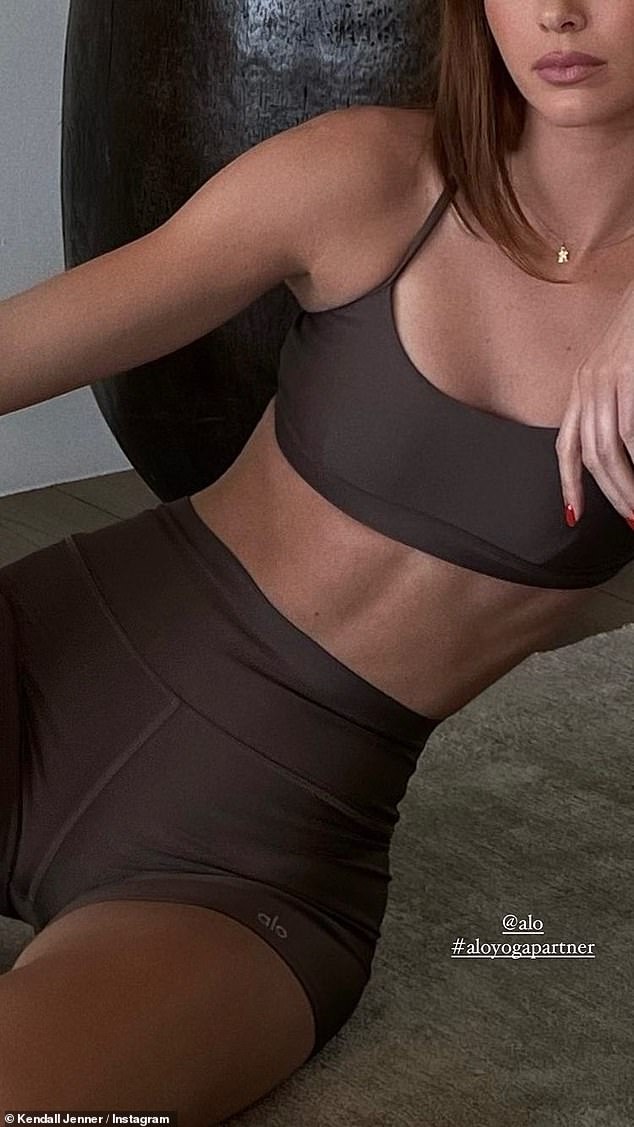 Closer look: Kendall appeared in a closeup photo with the top of her head cut off, which highlighted the high-waisted and matching bra top 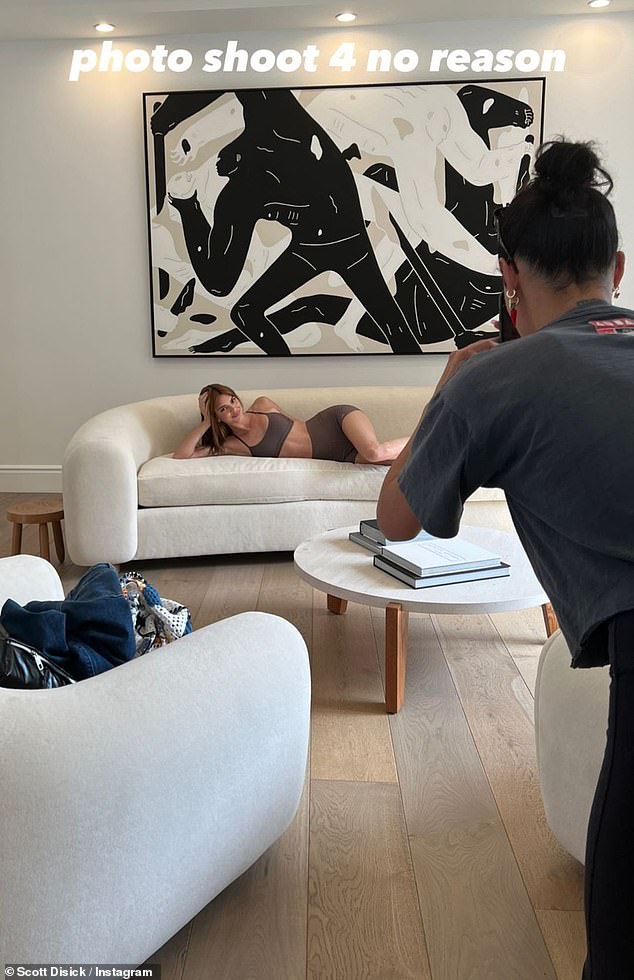 ‘Photo shoot 4 no reason’: Her sister Kourtney Kardashian’s ex Scott Disick was apparently present at the photoshoot, as he shared a behind-the-scenes snap of her posing on a sofa

The photos were released shortly after The Kardashians trailer was shared.

The clip featured some blockbuster insights, such as Kim Kardashian revealing that Kanye West informed her that her ‘career was over’ after their split.

And Khloe Kardashian was seen telling love rat Tristan Thompson that they needed to build ‘trust,’ while Kourtney Kardashian announced she is trying to have a baby with fiancé Travis Barker.

But Kendall had her moment in the spotlight too as she threw a mini tantrum, which was probably for good reason, as she is one of the more level-headed members of the family.

Kendall first said that fans will see a ‘whole new side of the family’ in the beginning of the trailer. 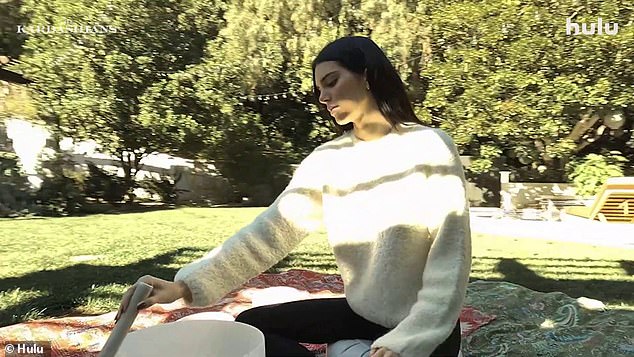 Calm before the Kenstorm: Kendall is seen in her back yard before she blows her top 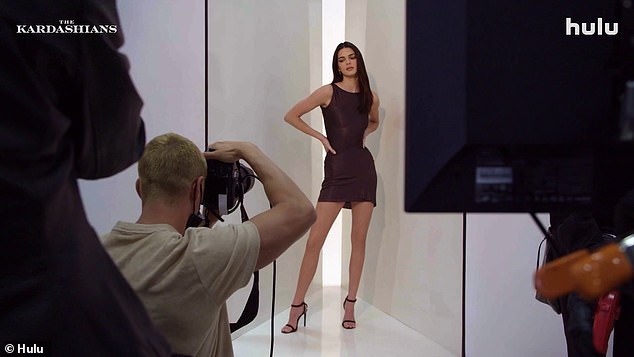 Snap away: And the leggy lady is also seen being photographed in a brown dress 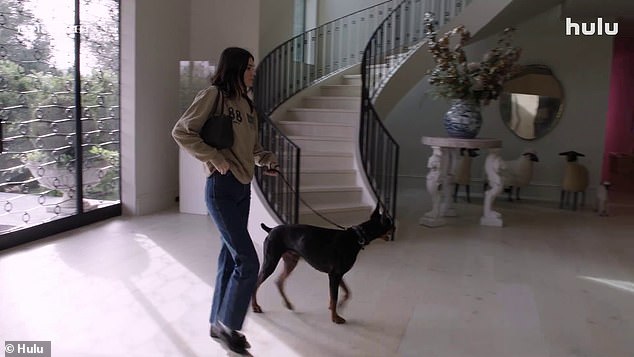 Yes she has a pooch: Kenny is also seen in someone’s house with her black dog

And next, the siren said she feels like she was being chased when in a car with Kylie, who at the time was pregnant with her second child, son Wolf (she already has daughter Stormi).

‘Family is forever,’ it says in on-screen text.

But then Kendall blew her cool as she sat next to mom Kris Jenner at a long wood table.

‘I’m out, this is so f***ing ridiculous,’ said Kendall as she got up from an outdoor table as someone said, ‘Oh my God!’

Kenny had on a beige sweatshirt from her tequila line 818.

The Hulu series The Kardashians debuts on April 14, 2022. 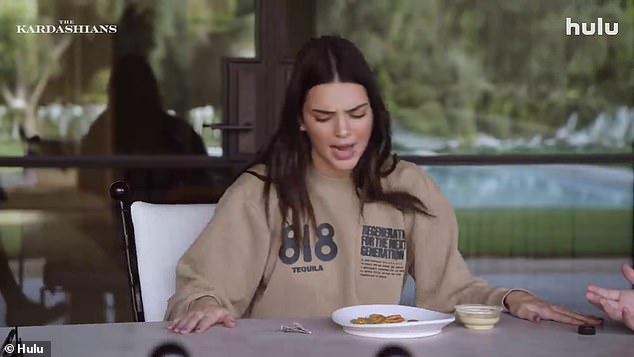 Thar she blows! When at an outdoor table in her 818 top, she gets mad 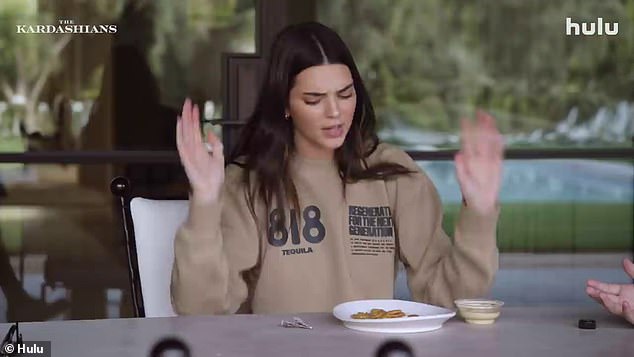 Done thanks: ‘I’m out this is so f***ing ridiculous,’ says Kendall as she is noticeably peeved 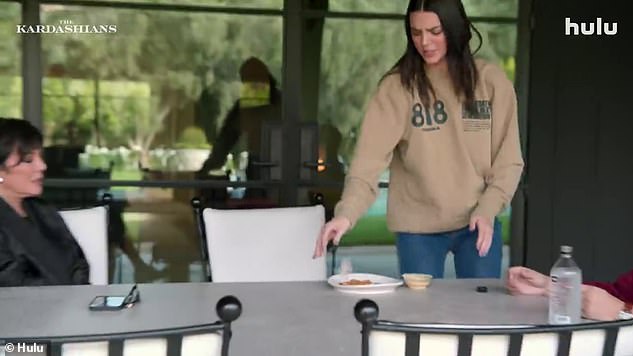 Can’t take it: She is then seen getting up from an outdoor table as someone says, ‘Oh my God!’