She seemed to make her relationship with the Phoenix Suns shooting guard Devin Booker official earlier this week during their PDA-filled trip to the beach.

And Kendall Jenner was back with her basketball star beau on Thursday as they dropped by The Little Beach House Malibu with friends.

The 24-year-old Keeping Up With The Kardashians star rocked a low-key, minimalist look with an all-beige ensemble. 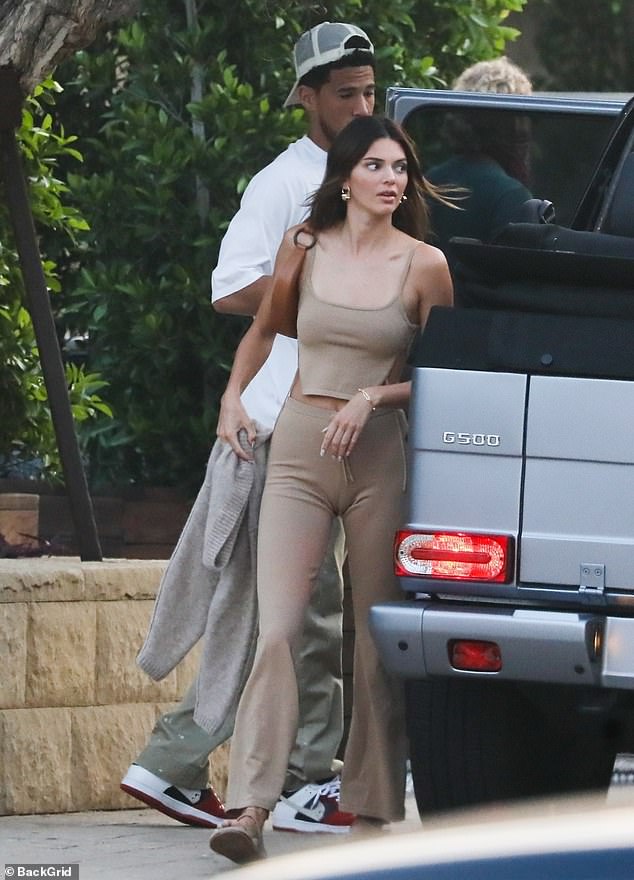 Date night: Kendall Jenner, 24, flaunted her slim frame in an all-beige ensemble while arriving at The Little Beach House Malibu on Thursday night with her beau Devin Booker and friends

Kendall’s fit arms and a hint of her flat tummy were on display in her beige apron top, which had strings dangling down to her waist.

She matched it with high-waisted beige sweatpants that flared at the bottom and beige flip flops.

The 5ft10in model accessorized with a brown croissant-shaped handbag over one shoulder, and she carried a gray sweater to guard against night breezes.

She had her raven tresses styled straight and parted down the middle as they cascaded down her shoulders. 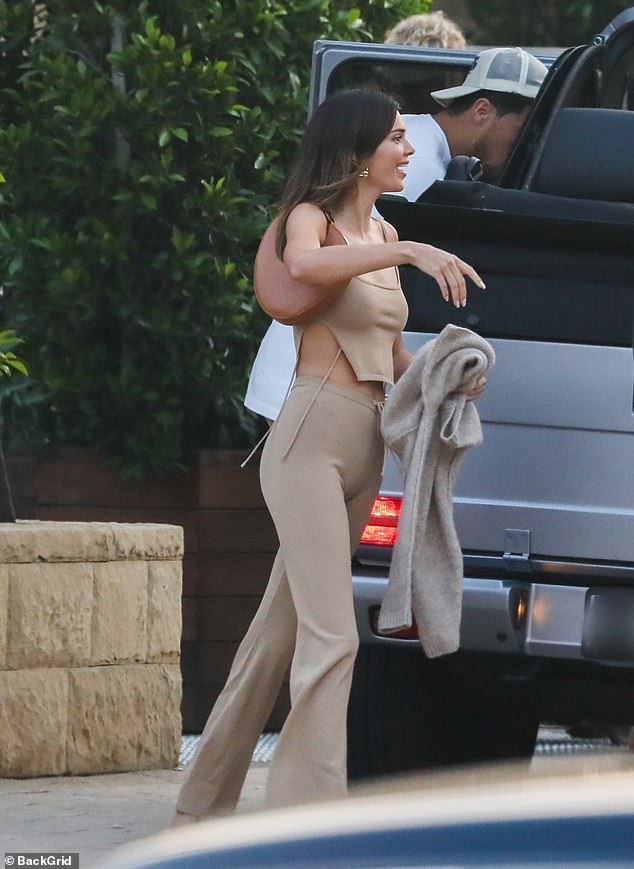 Fit figure: Kendall’s fit arms and a hint of her flat tummy were on display in her beige apron top, which she wore with high-waisted flared beige sweatpants and a brown croissant handbag 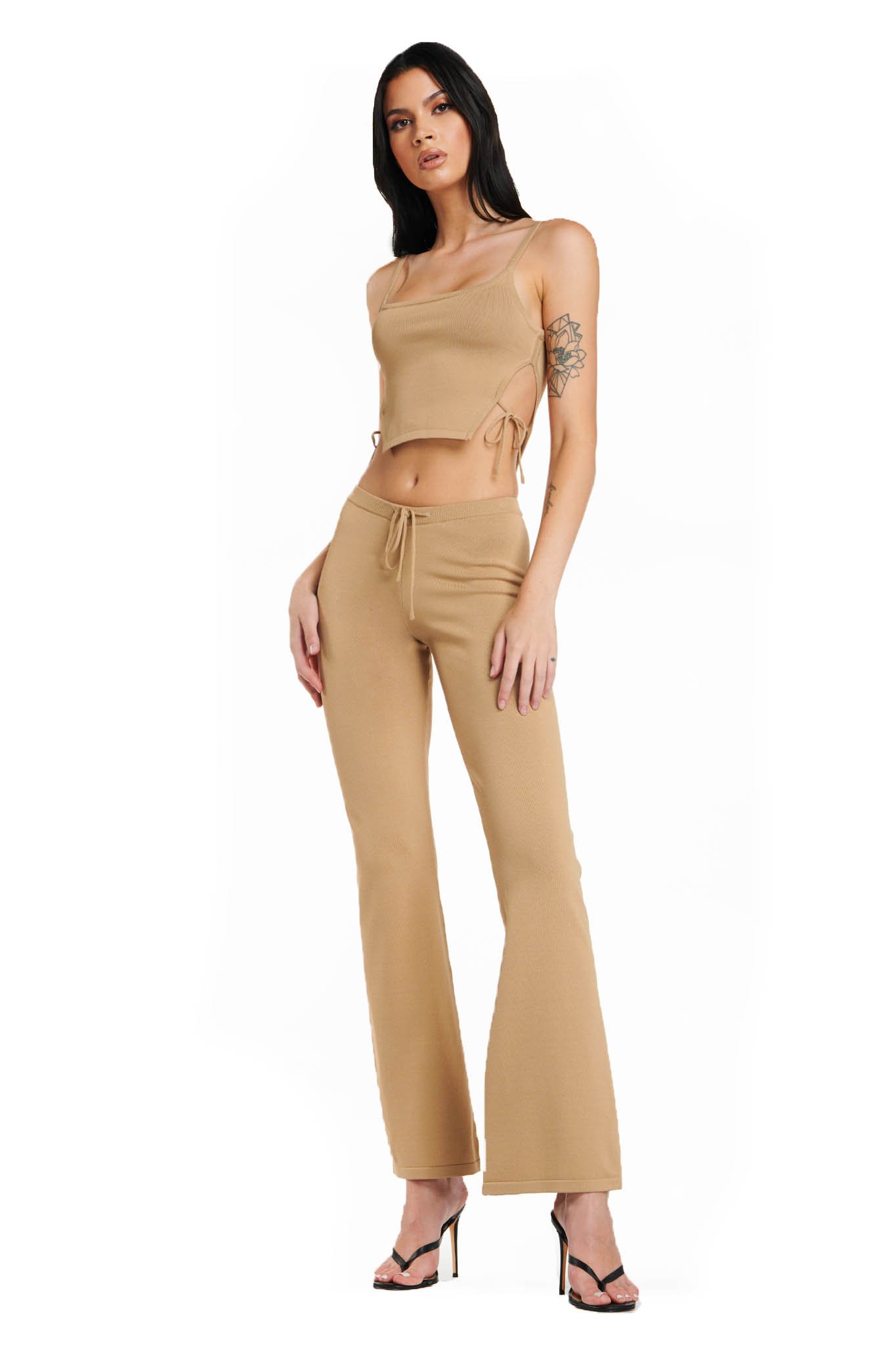 Devin was dressed more casually in a baggy white T-shirt and olive pants with red, black and white Nike sneakers, along with a white mesh baseball cap that he wore backward.

Kendall and her boyfriend arrived at the Soho House outpost in her silver convertible Mercedes G-Wagon, which she was spotted gassing up earlier that afternoon.

She spotted her friends as soon as she stepped out of the car and came around to the other side for a hug.

The Little Beach House Malibu is a private club that’s currently only allowing members to bring one guest each due to the coronavirus pandemic, though many of the SoHo House locations allow non-members to dine in their restaurants.

Despite the ongoing pandemic, neither Kendall nor any of her companions appeared to have masks on, and they didn’t practice social distancing. 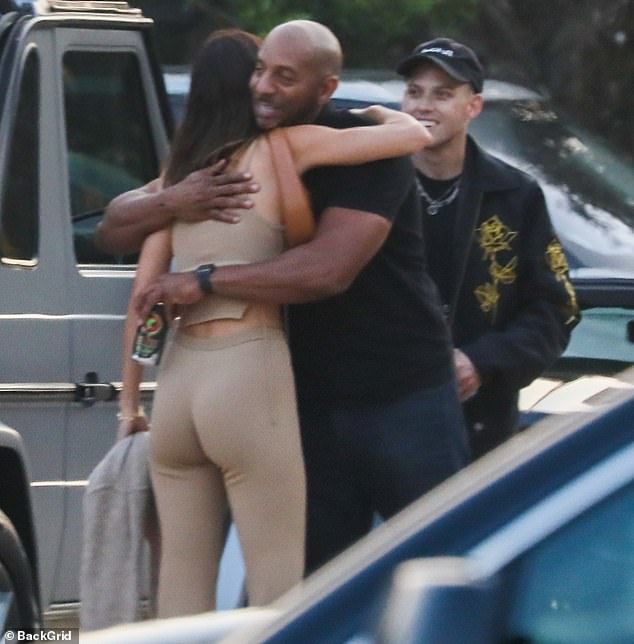 Risky business: Kendall didn’t bother to wear a mask or social distance, and neither Devin nor any of her friends did as they arrived

In recent days, Kendall has been sharing some gorgeous beach photos that appeared to be from her recent getaway to Turks and Caicos with her sister Kylie Jenner, 23.

On Thursday, she posted a short video to her Instagram Stories of her steely look transforming into a soft smile while at the beach.

She sported short braids on either side of her face, dating the video to her tropical vacation.

On Wednesday, Kendall was illuminated by a barrage of fireworks on the beach as she showed off her flat tummy in a glittering striped bikini. 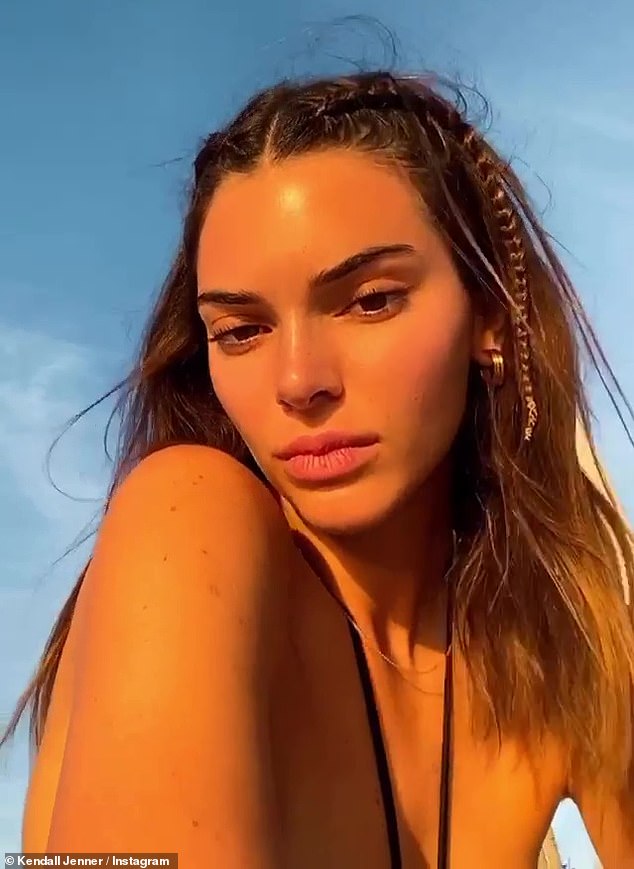 Hitting the beach: In recent days, Kendall has been sharing some gorgeous beach photos that appeared to be from her recent getaway to Turks and Caicos with her sister Kylie Jenner, 23 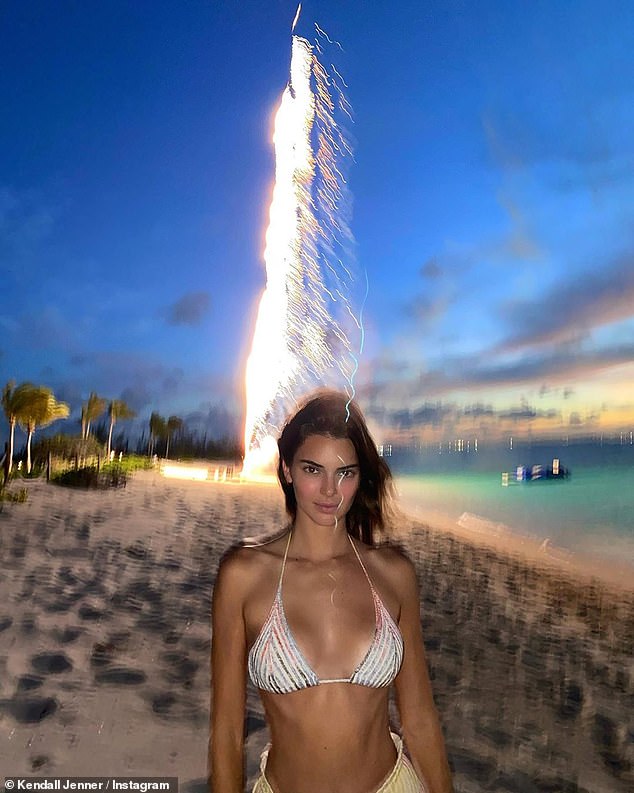 Festive: On Wednesday, she was illuminated by a barrage of fireworks on the beach as she showed off her flat tummy in a glittering striped bikini

On Tuesday, Kendall and her new beau were spotted hiding behind a staircase at a beach in Malibu while they had some intimate moments.

The two have also been flirty on social media, and after she posted a boomerang of herself recently with a strawberry emoji caption, Devin commented, ‘I like strawberries.’

Devin had previously dated Jordyn Woods, who was cast out from the Kardashian–Jenner orbit after Khloé Kardashian’s then-partner Tristan Thompson kissed her at a party.

Last month, Kendall took a trip with Devin to Sedona, Arizona, which strengthened rumors of their relationship.

They were previously seen dining together at the Kardashian–Jenner favorite Nobu Malibu back in June, and in April the two allegedly took a road trip through Arizona. 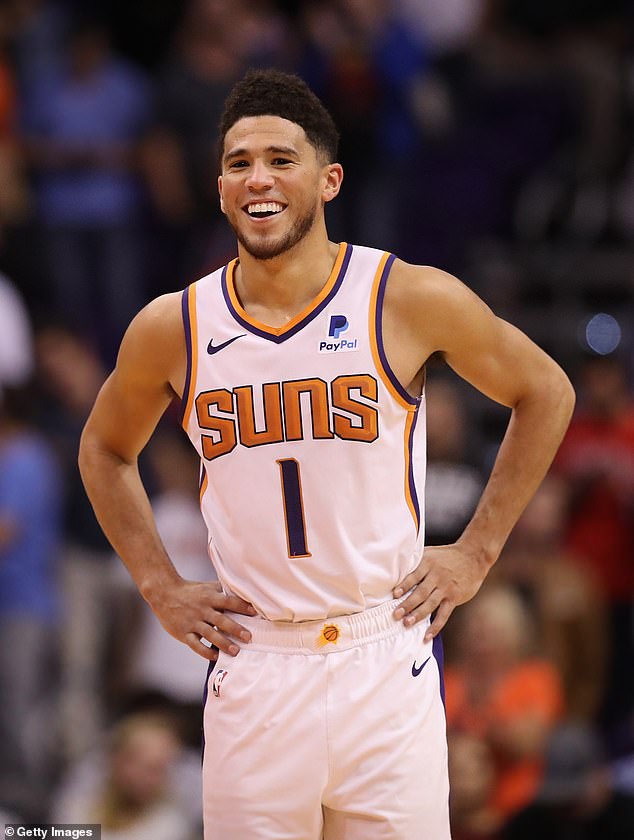 Basketball beau: She all but confirmed her romance with Phoenix Suns basketball player Devin Booker, 23, during a PDA-filled beach trip this week; Devin pictured in 2019