She was forced to spend Christmas day without four of her five children.

But Katie Price put her troubles behind her as she returned from a Boxing Day night out on Thursday, having dined at The Ivy in Brighton earlier.

The former glamour model, 41, carried a bright pink rose as she showed off her assets in a glittering bralet, which she teamed with a matching midi skirt. 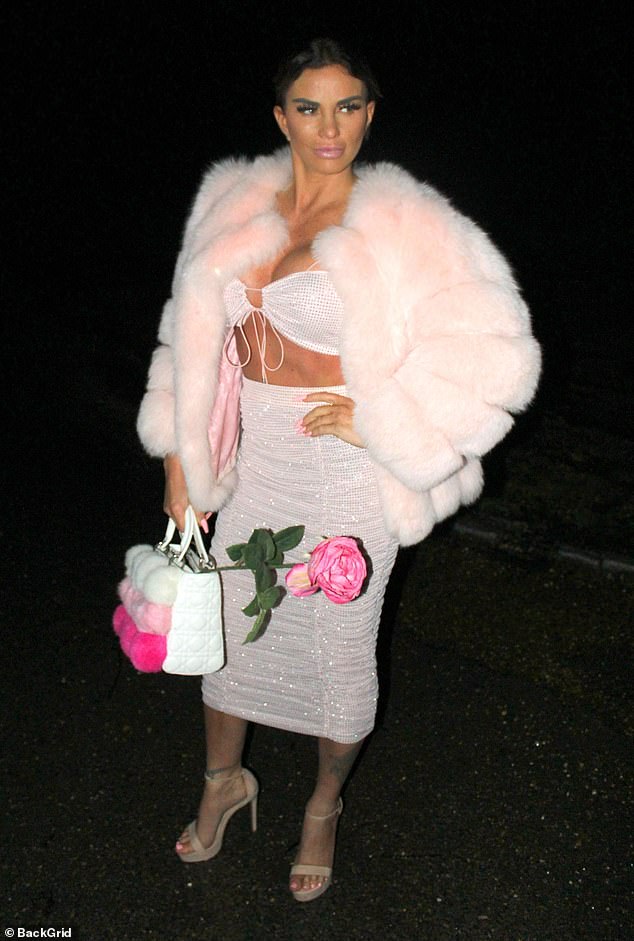 Looking good: Katie Price, 41, wore an ab-flashing bra top and a pink fluffy jacket for a night out on Thursday… after admitting she struggled to be without her children over Christmas

Heading out on the town in a daring party look, Katie added to her revealing look with an oversized baby pink fluffy coat.

The finishing touch was a pair of peach heels and a dash of pink lipstick.

Katie’s outing comes after she said it can be ‘hard’ to be apart from her children on Christmas Day while co-parenting. 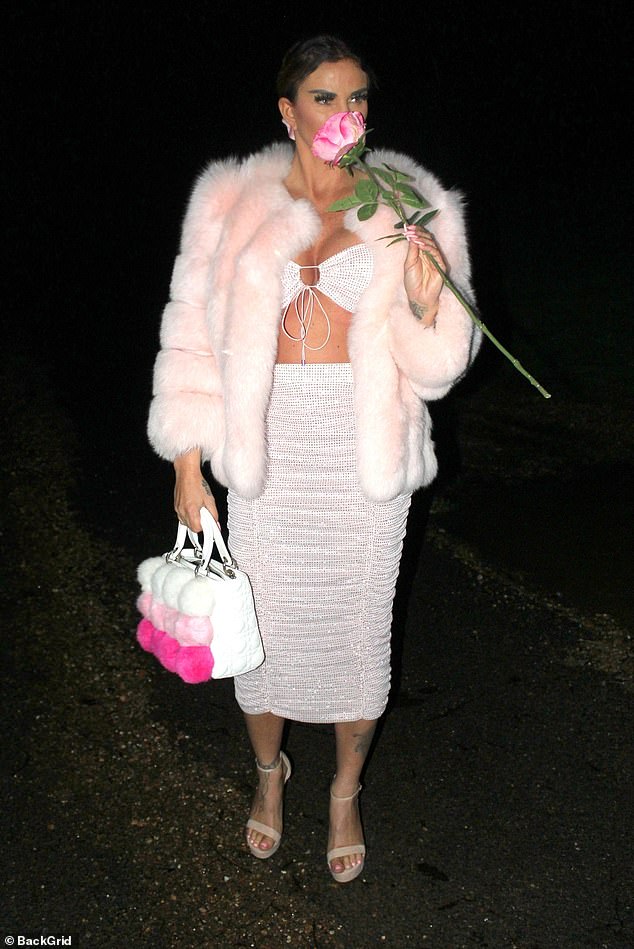 Nice: The former glamour model carried a bright pink rose as she showed off her assets in her skimpy bralet, which she teamed with a matching midi skirt

Junior, 14, and Princess, 12, and spent the day with their father Peter Andre, while her youngest kids Jett, 6, and Bunny, 5, were looked after by their dad Kieran Hayler.

Katie instead spent the day with only her eldest son Harvey, 17, before Junior and Princess joined her on Boxing Day.

The mother-of-five shared snaps with Junior and Princess on Instagram showing they had opened their presents from her on Boxing Day.

However, shortly after sharing the happy family pictures, Katie was forced to slam trolls who commented about Harvey telling them that he has been in her ‘sole care his entire Christmas holiday’.

In the festive images Katie was seen relaxing with her children and mother Amy, who was diagnosed with terminal idopathic pulmonary fibrosis in 2017, as they opened gifts.

Princess and Junior both looked happy with huge smiles on their faces and are seen wearing comfortable tracksuits for the day with their mum.

Katie captioned one of the snaps: ‘Boxing Day is all about chilling with the family. 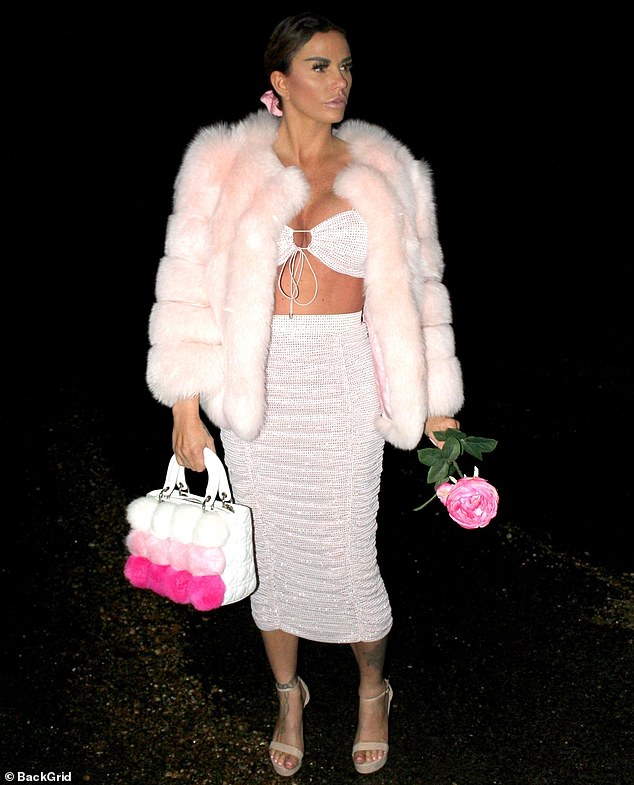 Having fun: Heading out on the town in a daring party look, Katie added an oversized fluffy coat 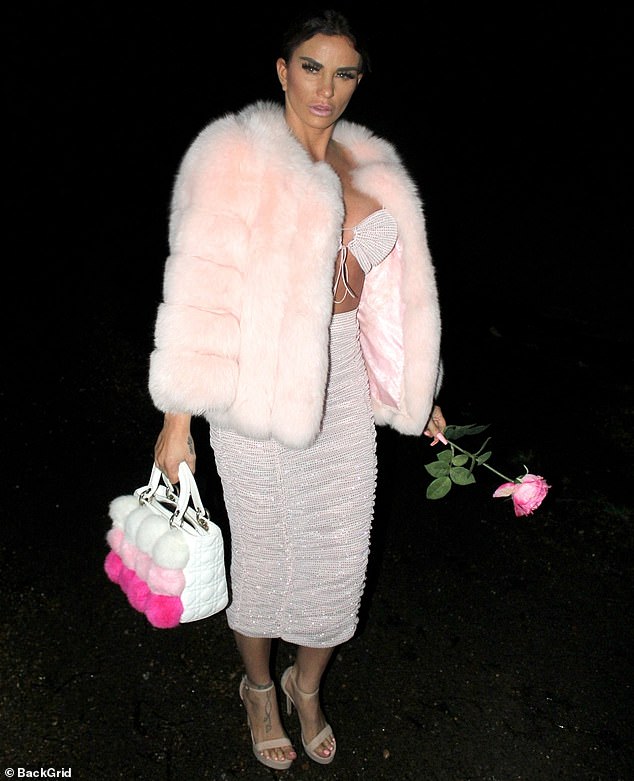 ‘Anybody who co-parents, knows how hard it is when it’s not your turn to have them on Christmas Day, but we’ve more than made up for it today!’

The former glamour model also shared a picture of her eldest son Harvey on social media, which showed him holding a tablet with a drawing of a zebra.

She wrote ‘so proud of what my clever boy @officialmrharveyprice has drawn today’.

However shortly after posting the pictures, Katie took to Instagram Stories to share a short video of her son saying ‘Dear Nicky… spend Christmas with my mummy’. 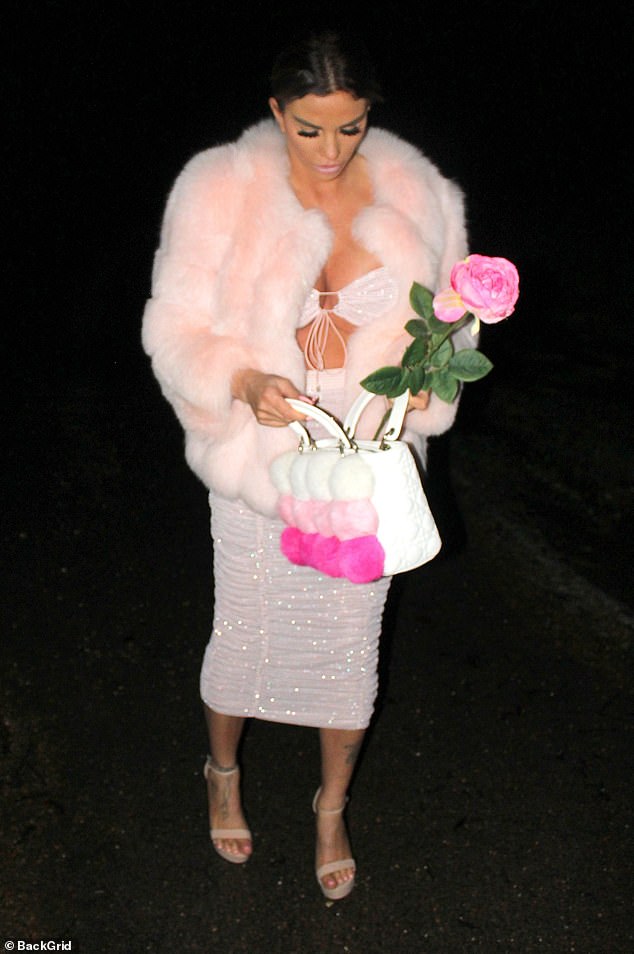 Accesorising: Katie’s finishing touch was a pair of peach heels and a dash of pink lipstick 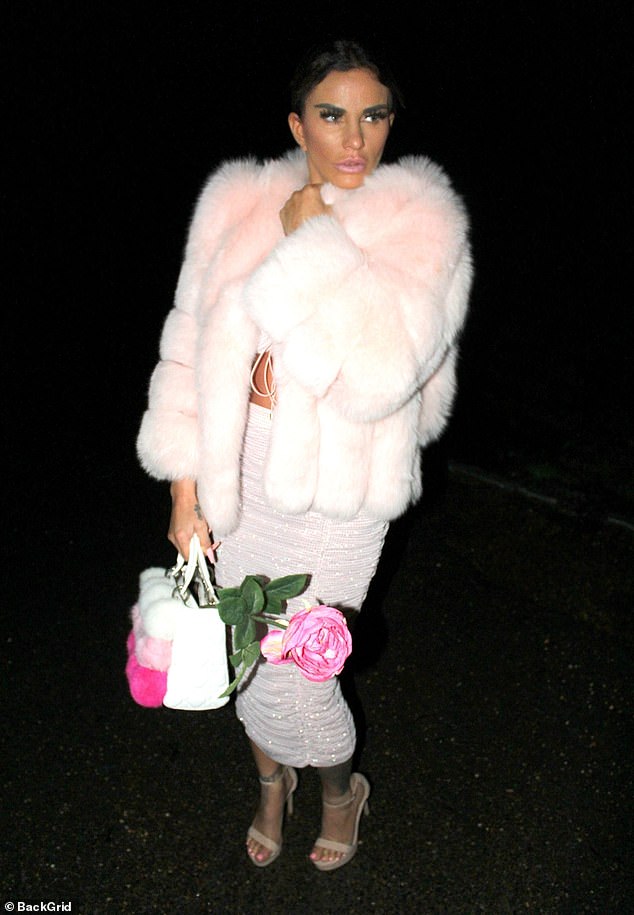 Look at me: Katie showed off her faux fur coat during her night on the tiles

Over the top of the clip Katie wrote: ‘Such a shame that I can’t even enjoy Christmas with my children, without trolls.

‘But for all those commenting @officialmrharveyprice has been in my sole care his entire Christmas holidays. I’ve had no help or nannies, just me.’

Junior and Princess spent Christmas Day with their father Peter and shared numerous videos of them opening presents.

In one funny video from their day Princess is seen with bin bags and Marigold gloves as a present from her prankster big brother.

‘Clean your room!’ Peter joked with his eldest daughter, before taking his humour to the extreme by pretending to have a poo on camera with a plastic lump of faeces.

He captioned the clip: ‘Got a fake poo …. in my stocking 🙂 cheers Santa’. 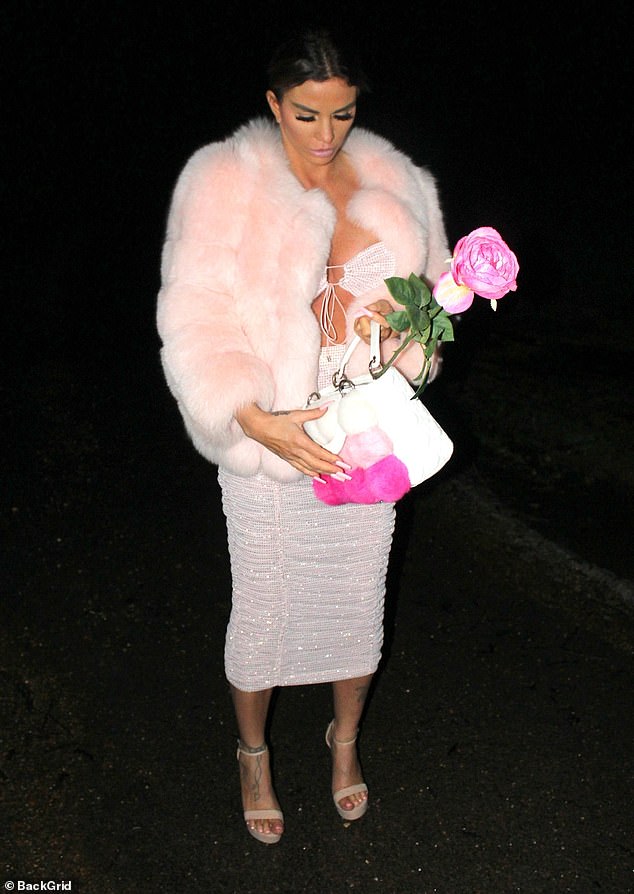 Happy: The bankrupt star was clearly enjoying herself during the night away from her financial troubles

Just hours earlier, Katie, who is dealing with bankruptcy, posted a heart-warming photo of her and Harvey meeting Santa.

Meanwhile, Kieran Hayler, 32, who Katie is technically still married to, spared no expenses as he gifted costly presents to Bunny and Jett.

Former stripper Kieran, who also looks after his partner Michelle’s child Valentino, seven, pulled out all the stops for the trio. 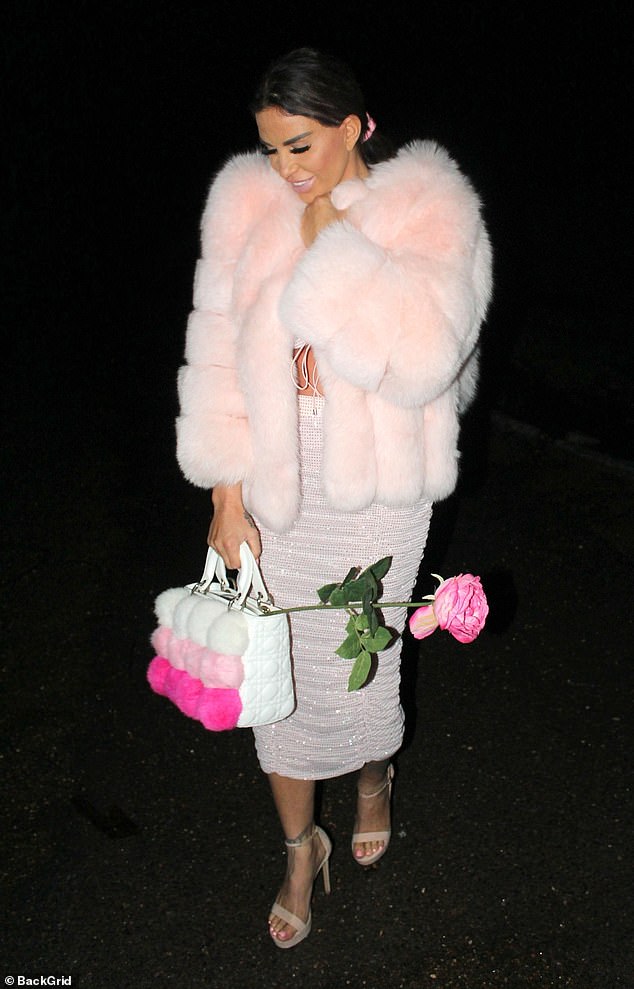 Keep walking: The star held the rose in front of her and her coat tightly around her 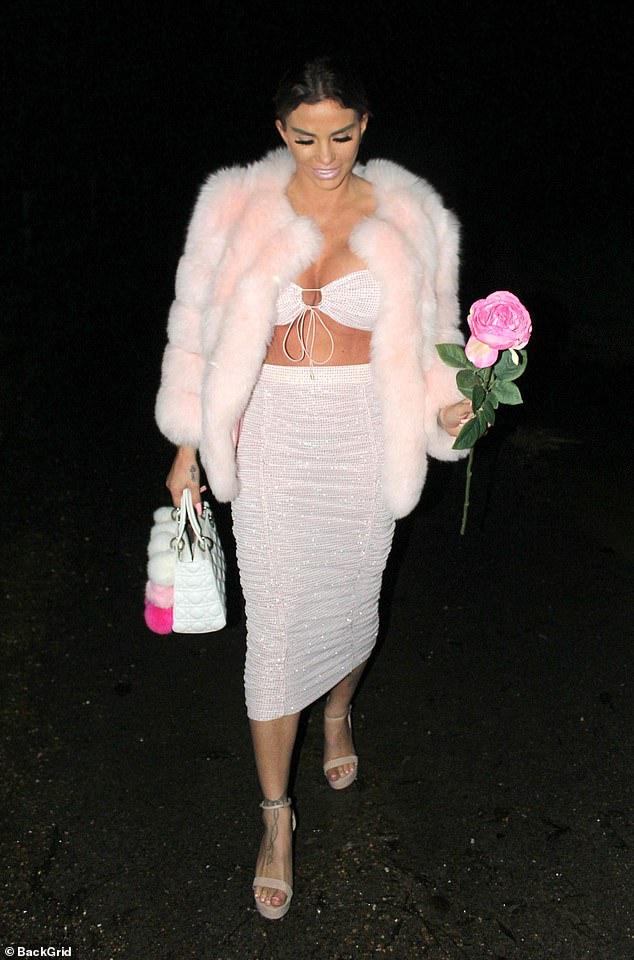 Always smiling: Katie gave a confident smile as she showed off her party outfit

In a series of cute Instagram stories, the doting father and step father surprised Bunny with a pink bike.

She opened a small present indoors that turned out to be a bell ‘for my bike,’ she said.

‘What bike?’ asked her dad, pretending not to know before leading her outside to the Barbie two wheeler and receiving a hug for his efforts.

He pulled the same trick on Valentino, buying him a Playstation game before revealing the console to play it on.

Jett was also lavished in gifts including a huge Lego set. ‘Merry Christmas everyone!!’ Kieran posted when he was done surprising the youngsters. 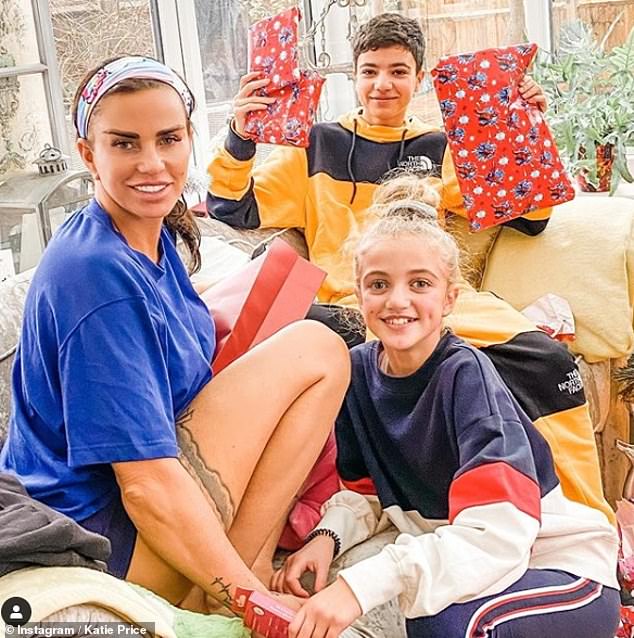 Family time: Katie said it can be hard co-parenting when it’s not her year to have the children on Christmas Day after she spent it without four of her five children 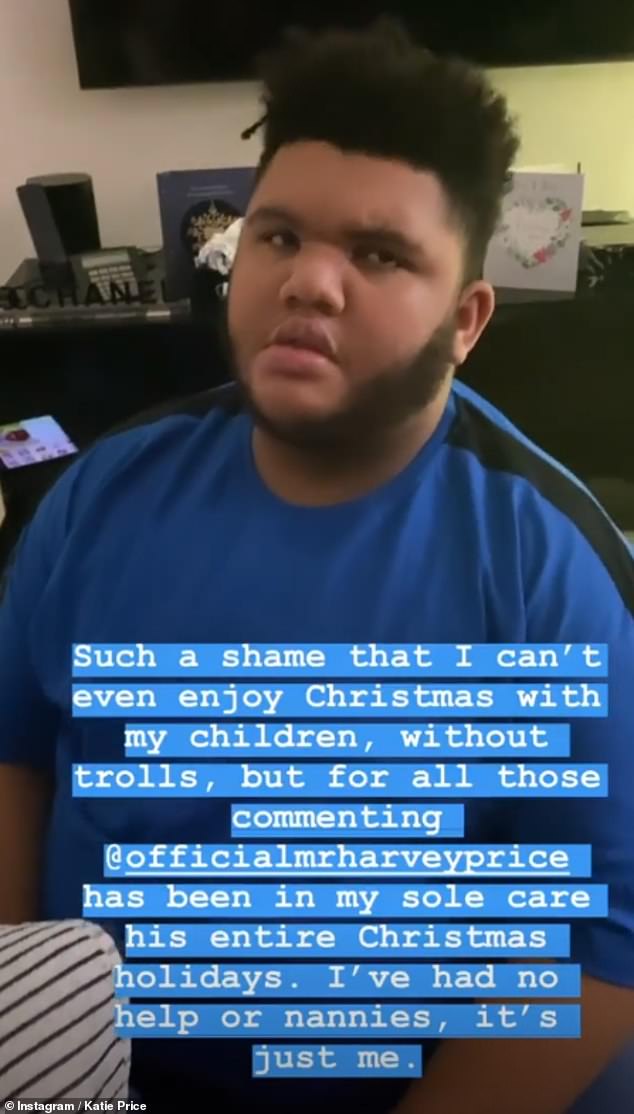 Trolls: The mother-of-five was forced to hit back at trolls and tell them she’s been looking after her eldest son Harvey, 17, on her own this Christmas 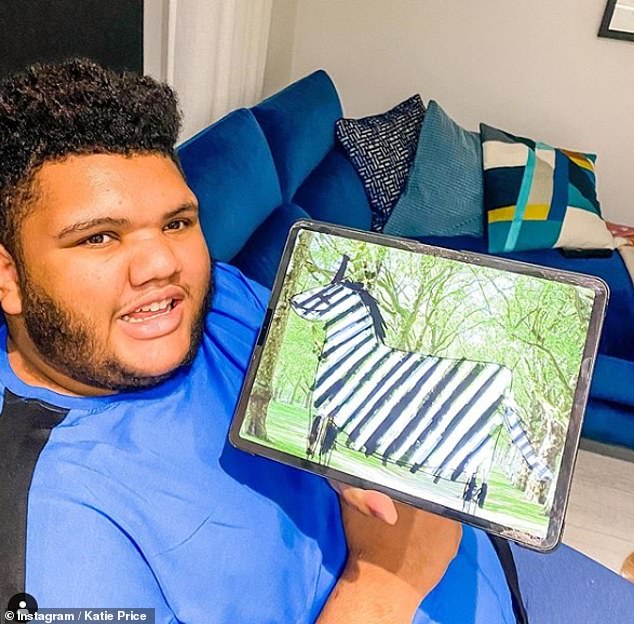 Proud: Katie also shared a snap of Harvey and his tablet artwork of a zebra on Instagram

Katie was declared bankrupt after facing further legal action over her spiralling debts, when she was pursued by creditors and the taxman after revealing she has spent her entire £45million fortune.

Sources have claimed that Katie no longer cares about being sued by Peter or any of her other past loves – including Kieran – because she doesn’t have any money left to give them.

In a recent radio interview she teased: ‘It will be explosive. They’re going to be named and shamed, I’m going to put people in their place- the Pricey is back and she is on fire.’ 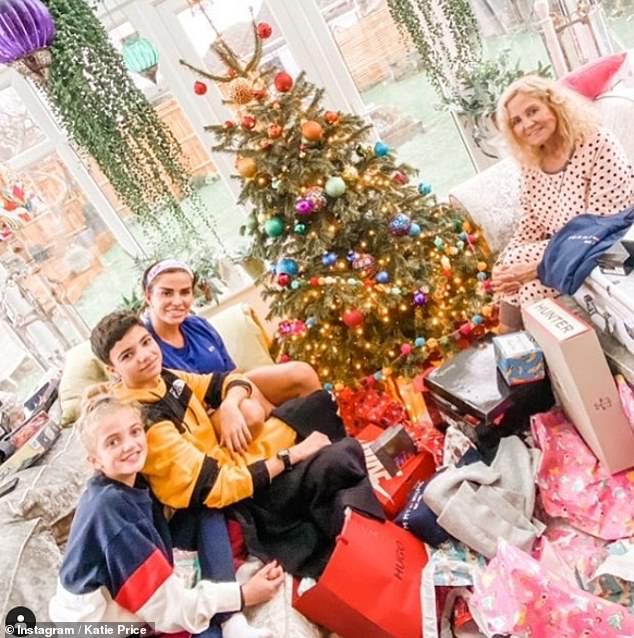 Quality time: Katie looked relaxed as she chilled with Princess and Junior her mother as they opened presents on Boxing Day

We will use your email address only for sending you newsletters. Please see our Privacy Notice for details of your data protection rights. Daisy May…