‘More procedures were needed than they thought:’ Katie Price undergoes a SIX HOUR operation to repair her broken feet as she praises doctors for ‘giving her the chance to walk again’

Katie Price has revealed she’s undergone a six hour operation to repair her broken feet after being warned by doctors it could take months for her to recover.

The star, 42, took to Instagram on Friday to pen a lengthy caption to update fans on her condition, and admitted there were ‘more procedures needed than they thought.’

It comes after it was reported that Katie revealed that she is banned from having sex with her boyfriend Carl Woods for two weeks after being left unable to move by the casts following her major surgery. 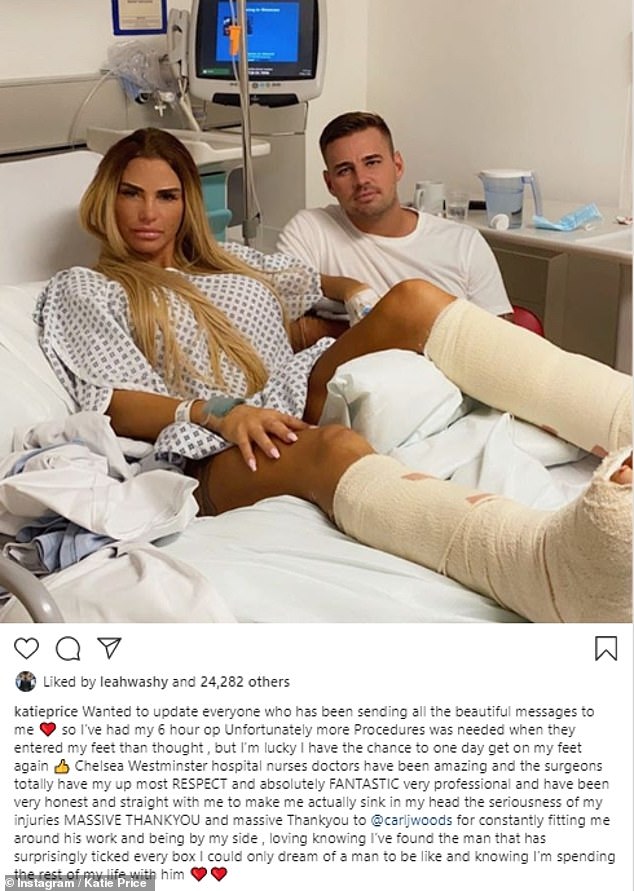 Ouch! Katie Price, 42, has revealed she’s undergone a six hour operation to repair her broken feet after being warned by doctors it could take months for her to recover

In a lengthy post, Katie wrote: ‘Wanted to update everyone who has been sending all the beautiful messages to me ❤️ so I’ve had my 6 hour op Unfortunately more Procedures was needed when they entered my feet than thought , but I’m lucky I have the chance to one day get on my feet again ��

‘And massive Thankyou to @carljwoodsfor constantly fitting me around his work and being by my side , loving knowing I’ve found the man that has surprisingly ticked every box I could only dream of a man to be like and knowing I’m spending the rest of my life with him.’ 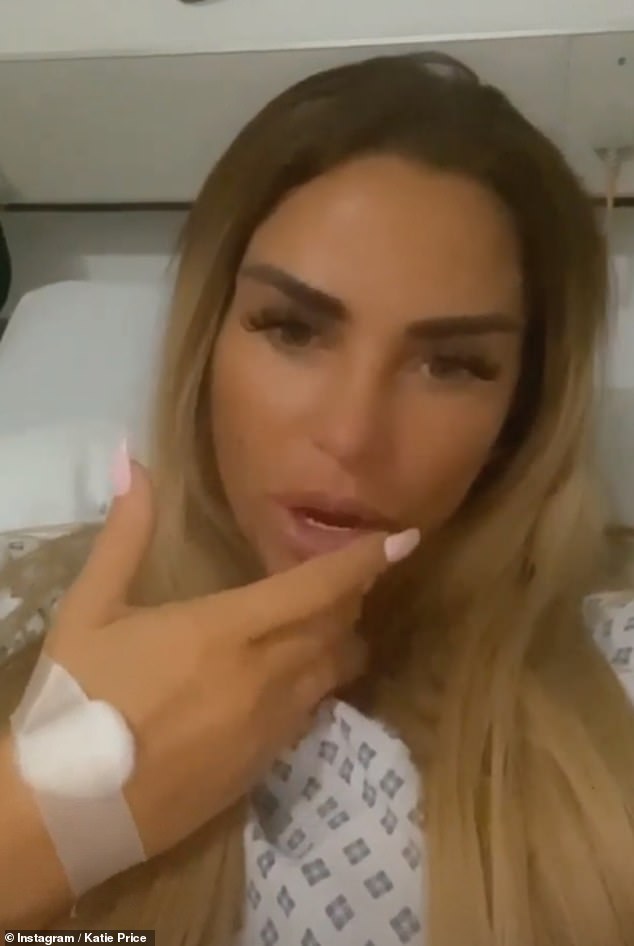 Candid: The star, 42, took to Instagram on Friday to pen a lengthy caption to update fans on her condition, and admitted there were ‘more procedures needed than they thought’

It comes after Katie was banned from having sex with boyfriend Carl, 31, for two weeks after the surgery.

She was allegedly told she would not be able to move for a fortnight after the procedure, according to a report from The Sun.

A source speaking to the publication claimed: ‘Katie’s been told she has to lie down and not move for two weeks when she gets home.

‘She will have to keep her legs elevated to give her the best chance of recovery – and that means no sex or moving around.

‘Carl will basically be her full time carer – the only time she’s allowed to move is to go to the toilet.’

The requirement will allegedly be ‘a real test’ for Katie, but the star is said to be following the doctor’s orders.

Katie shared a glimpse of her colourful casts on Instagram on Thursday. 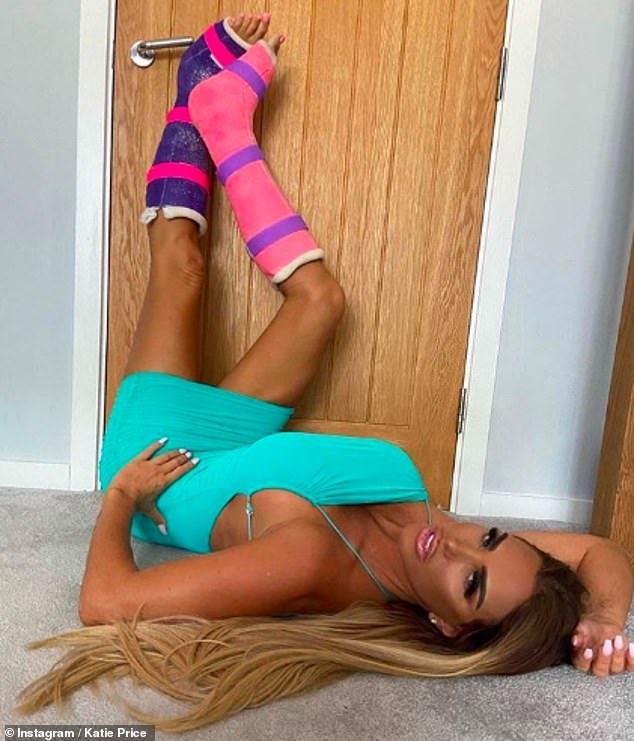 Glam: It comes after Katie shared a glimpse of her colourful casts on Instagram on Thursday

Doctors orders: The former glamour model explained in the caption that she had been told to ‘keep her legs up’ before the surgery

She previously said she was ‘terrified’ about the operation and has been ‘banned from getting out of bed, with doctors telling her to stay laying down’.

A source told The Sun: ‘Katie’s doctors told her she had to stay lying down on her back to stop her feet swelling up in the heat.

‘She’s terrified about the surgery tomorrow – but she’s listening to all the doctor’s advice.’

The source added that Katie was ‘devastated’ about the medical advice as it meant she couldn’t celebrate her youngest son Jett’s birthday properly.

However it is thought that the mother-of-five has told him that she will make it up to him with another party after the operation.

MailOnline has contacted a representative for Katie for a comment.

Katie also discussed what doctors had told her to do in the lead up to her surgery in the caption to her latest Instagram offering.

In the glam snap, the star could be seen reclining on the floor with one hand on her hip as she rested her two feet on a door. 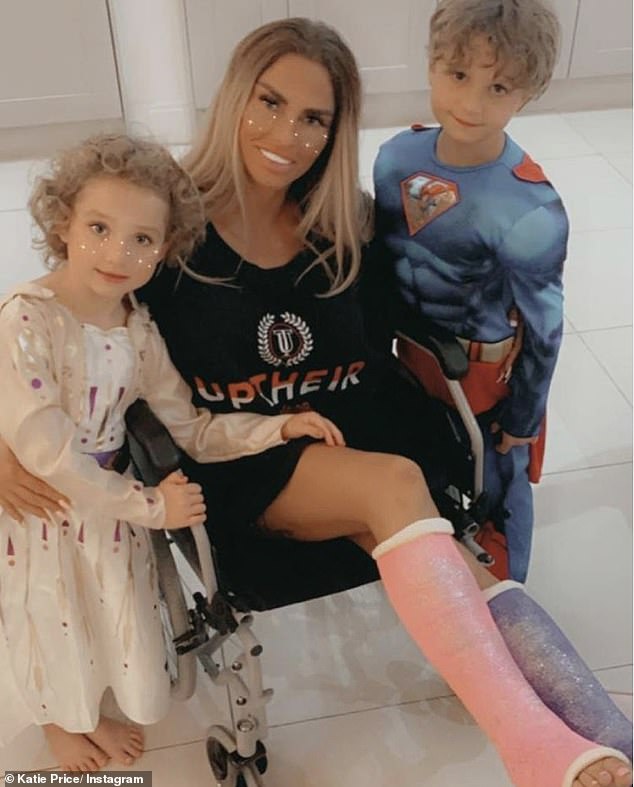 Family first: Katie is said to have been ‘devastated’ about medical advice to ‘stay in bed’ as it was her youngest son Jett’s birthday and she wanted to celebrate properly (pictured with her son and youngest daughter Bunny)

Katie wrote: ‘It’s so hot! I have to keep my legs up until my operation as doctors orders but fancied putting on a little dress from @ohpolly and feel glam as it’s been ages.’

Katie broke both of her feet and ankles in a freak accident while on holiday in Turkey last month, and is awaiting surgery which will help her on the long road of recovery.

Since the accident, Katie has been seen several times being pushed in a wheelchair by her beau Carl Woods, 31, including on Wednesday when she had a coronavirus test at a hospital to see if she could be operated on later in the week.

It was previously reported that Katie has been warned by doctors she ‘must take her recovery seriously or she could risk losing a leg’.

The reality star is said to have been left ‘terrified’ by her surgeon’s stark warning. 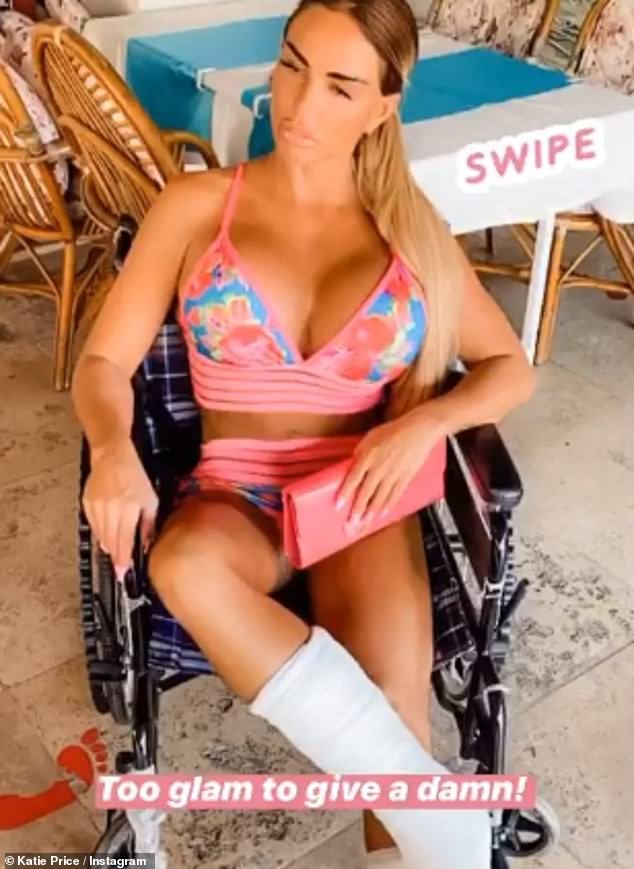 Trooper! Katie is now preparing for surgery, thought to be happening on Friday, and is looking at a long recovery time after the painful accident

A source told The Sun: ‘Katie’s doctors have warned her she must take her recovery seriously and it’s left her terrified.

‘She’s prone to getting infections after operations, and her surgeon says she could lose a leg if her feet get infected.

‘She’ll have to be so, so careful – she’ll have medical professionals on call 24/7 – and change the dressings regularly. She’s got a long road ahead of her.’

When contacted by MailOnline, a representative said : ‘Katie I can confirm will be undergoing major surgery this week to correct her injuries sustained on her recent holiday to Turkey.’ 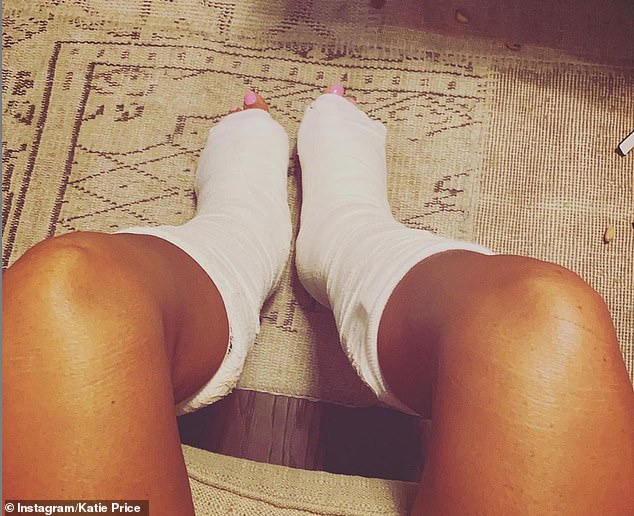 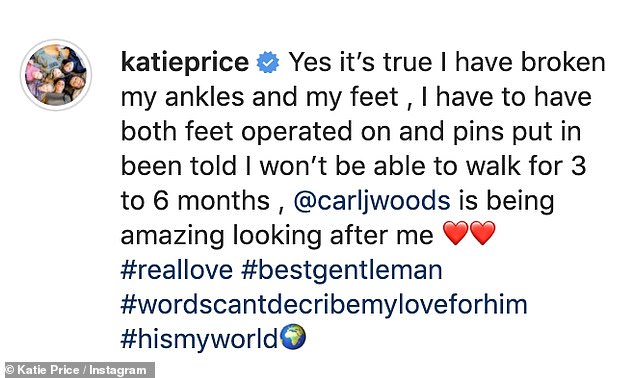 Shock injury: Katie confirmed the news on Instagram, revealing that it could be six months before she can walk properly again

Katie recently explained she broke her ankles and feet during a ‘silly accident’ while on holiday with her beau and her children Princess, 13, and Junior, 15.

Taking to her YouTube channel, the star explained: ‘Silly me, at my age, should calm things down. Basically, silly little accident. I was running and jumped over a wall, as it was a little shortcut, and didn’t really judge the height.

‘I just sort of fell funny on my ankles and I fractured the hairline on my heels and stuff. The hospital here wanted to operate and wanted to put pins in and stuff. Because I’m away, I’d rather wait until I get home.’

She continued: ‘It’s the most painful thing ever. Like when I was trying to put the cast on, I was screaming in pain. They said I won’t be able to walk for three to six months.’ 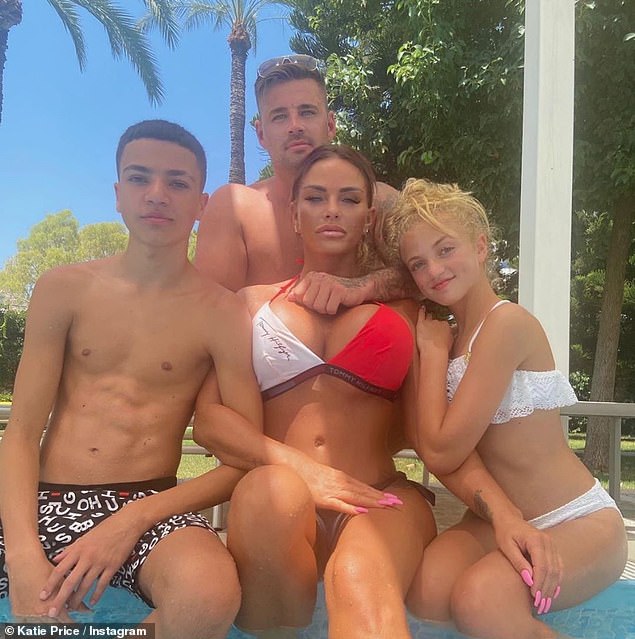 Getaway: Katie posed in a family snap with beau Carl, and kids Junior and Princess on Wednesday, before they ventured to the theme park where she fractured both ankles and feet