Katie Holmes, 42, smiles from ear to ear as she takes her ‘sweetest daughter’ Suri Cruise, 15, on a shopping spree in New York City

Katie Holmes is a doting mother who seems to put her only child, daughter Suri Cruise, first.

And on Wednesday the Batman Begins actress did just that as she treated the teenager – whom she called the ‘sweetest daughter’ on Mother’s Day in May – to a shopping spree in the SoHo neighborhood of Manhattan.

The mother and daughter team were seen smiling as they wore casual outfits while waling into trendy store Scotch And Soda. 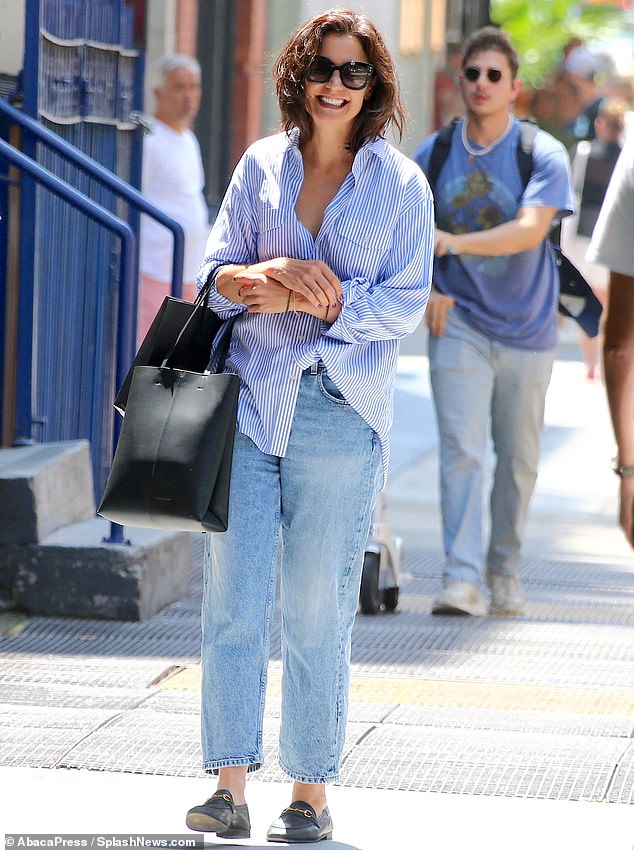 Happy lady: Katie Holmes smiled from ear to ear as she was seen on a busy New York City street on Wednesday

Holmes was wearing a blue and white striped men’s shirt that was not tucked into her acid washed boyfriend jeans.

The frequent cover girl added her favorite pair of Gucci loafers as she carried a matching purse.

The red carpet favorite wore her wavy brunette hair down over her shoulders, adding black sunglasses.

Suri, 15, had on short shorts and an oversized T-shirt with flip flops as she added a bright pink face mask and held on to her cell phone.

The two appeared to be in a great mood as she laughed and smiled on the busy sidewalk. 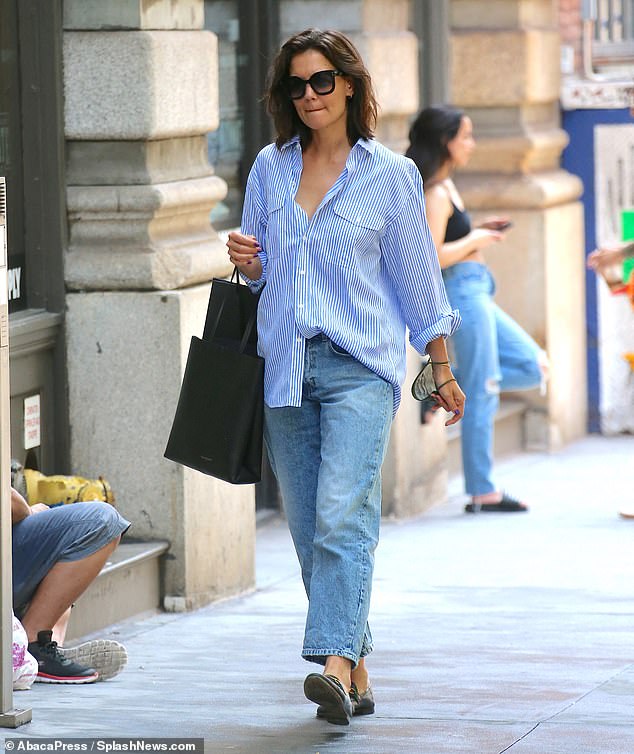 Manhattan style: Holmes was wearing a blue and white striped men’s shirt that was not tucked into her acid washed boyfriend jeans. The cover girl added her favorite pair of Gucci loafers as she carried a matching purse 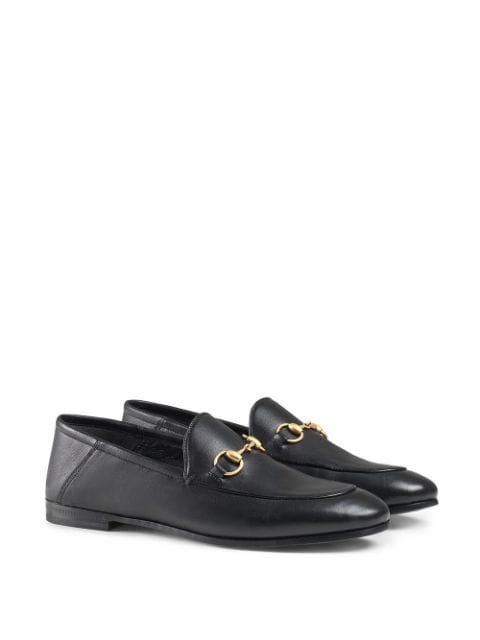 This comes three months after she split from chef turned actor Emilio Vitolo Jr with sources saying their relationship ‘fizzled’.

‘They figured out they’re better off as friends. There’s no drama that went down with the breakup and in fact, they’re still friends.’ a source told Us Weekly.

Emilio collaborates with his father to run the popular Italian restaurant Emilio’s Ballato, a favorite of celebrity visitors including Tom Hanks, Bradley Cooper and even former president Barack Obama. 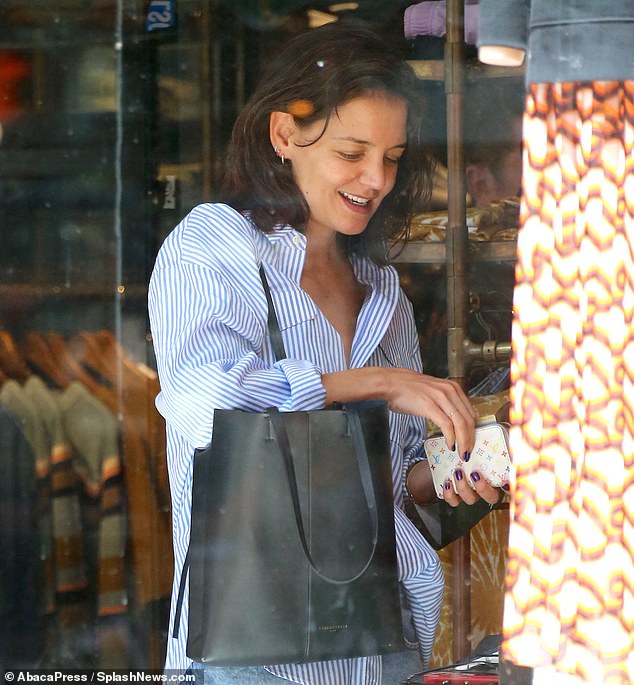 Money mama: The looker was seen opening her Louis Vuitton wallet while inside the store Scotch And Soda

His romance with Katie reportedly faded after she left for Connecticut to film her second feature as a director, The Watergate Girl.

According to ET, Katie took a ‘wait and see’ approach to her relationship while she was out of the state filming.

‘Before she left, [Katie and Emilio] were inseparable, but their relationship was existing in a bubble,’ said an insider. ‘Because of the pandemic, she wasn’t jet setting around the country for jobs and he wasn’t tied up every night working at his family’s restaurant.’

But once their regular social lives resumed, the couple found they were not ‘as compatible anymore.’ 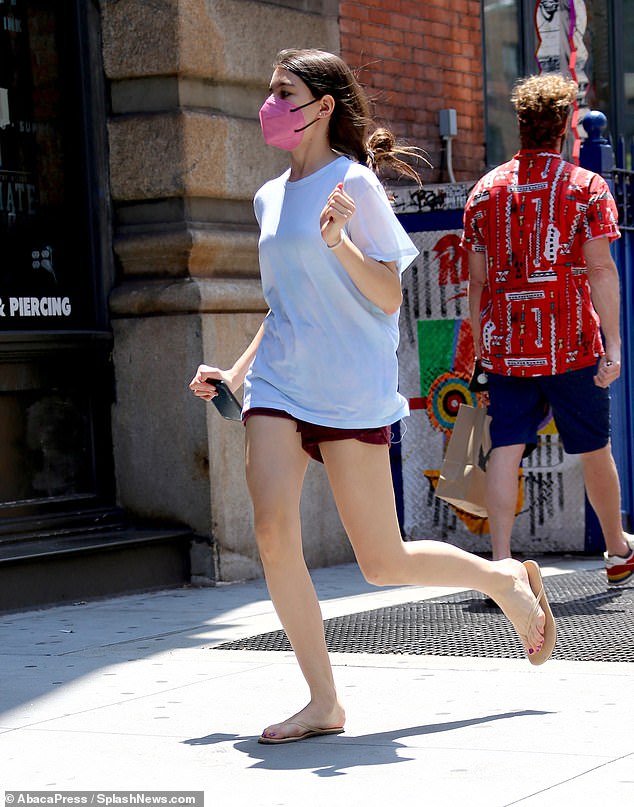 Holmes praised her ‘talented’ ex Vitolo Jr. ahead of his new short film Almost A Year premiering at the 2021 Tribeca Film Festival.

Katie, who served as producer on Almost A Year, shared a sweet post congratulating leading man Emilio on the project.

‘I am so honored to have been a part of the making of ALMOST A YEAR which is premiering at #Tribeca2021 as part of #TribecaAtHome tickets and more details on the @Tribeca website. Congratulations to the very talented and amazing cast @eveclindley @emiliovitolo @lilmitz_ and director @jamiesonbaker,’ she concluded. 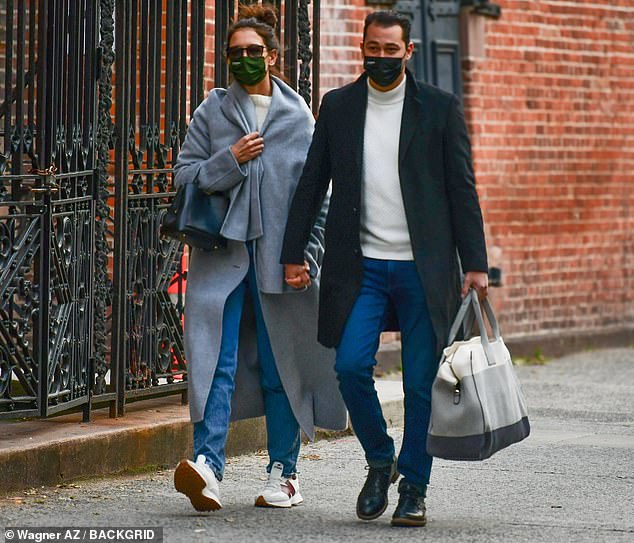