Katie Couric appeared to have a cute new dog while out on a stroll in the Hamptons on Friday.

The 57-year-old news anchor had a tiny brown-and-black Dachshund that chased after her as she took a walk.

She looked casual in a summery tiered dress covered in a busy floral-print pattern for the outing. 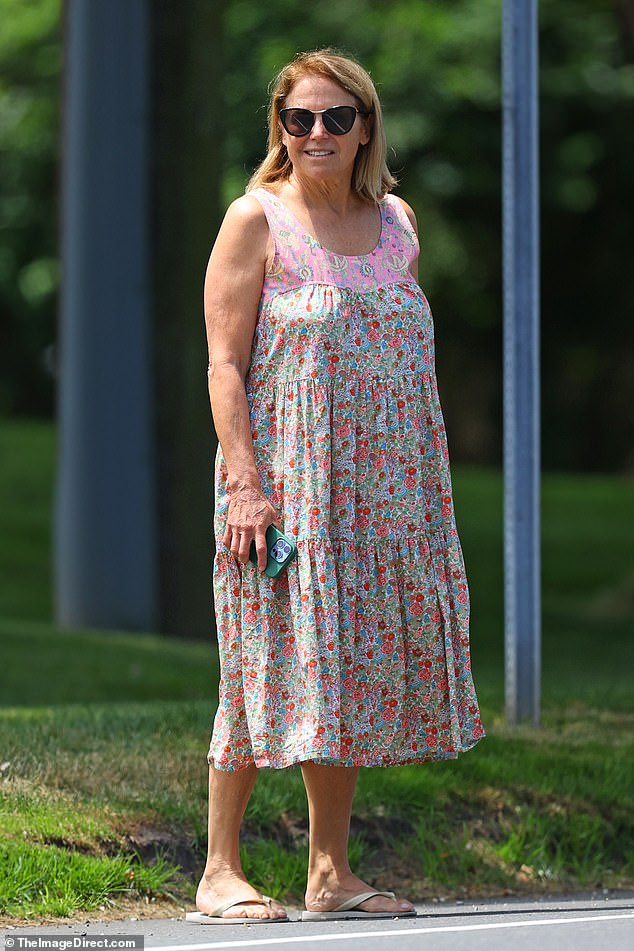 Flower power: Katie Couric put on a colorful display in a floral-print dress while taking her cute new Dachshund puppy for a walk in the Hamptons on Friday

Katie’s sleeveless ensemble highlighted her arms, and it featured a pink-tinged top with a different pattern.

Her shoulder-length strawberry blond hair was part to the side and framed her large black cat-eye sunglasses.

She completed the relaxed look with a set of gray flip flops, and she wore several bracelets on one of her wrists.

Katie had her new puppy on a leash, and she even held the cutie pie in her arms while she stopped to chat with a friend. 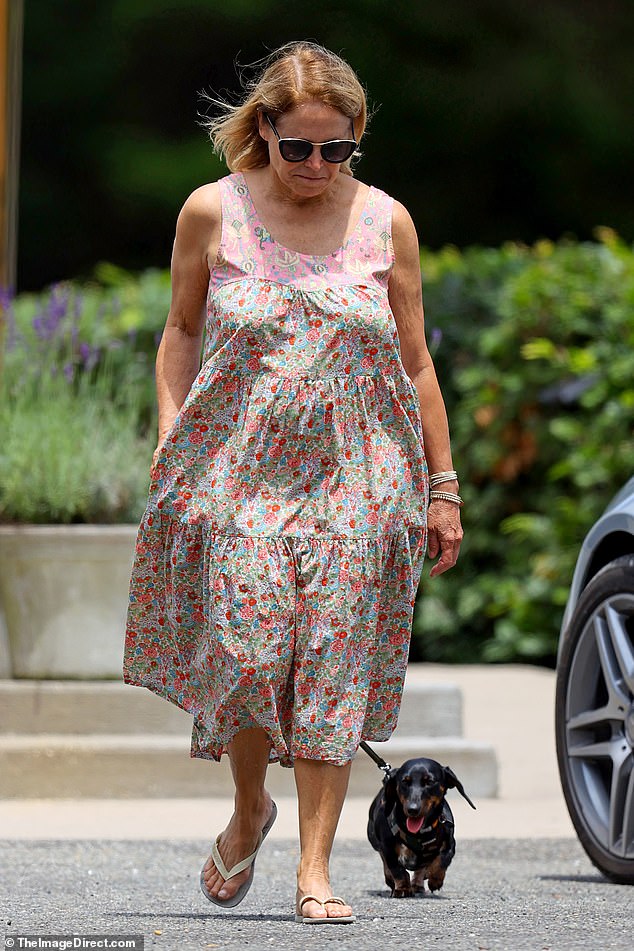 Too cute! The adorable brown-and-black pooch ran behind her. Her sleeveless dress was covered in multiple colors, and she contrasted it with gray flip flops 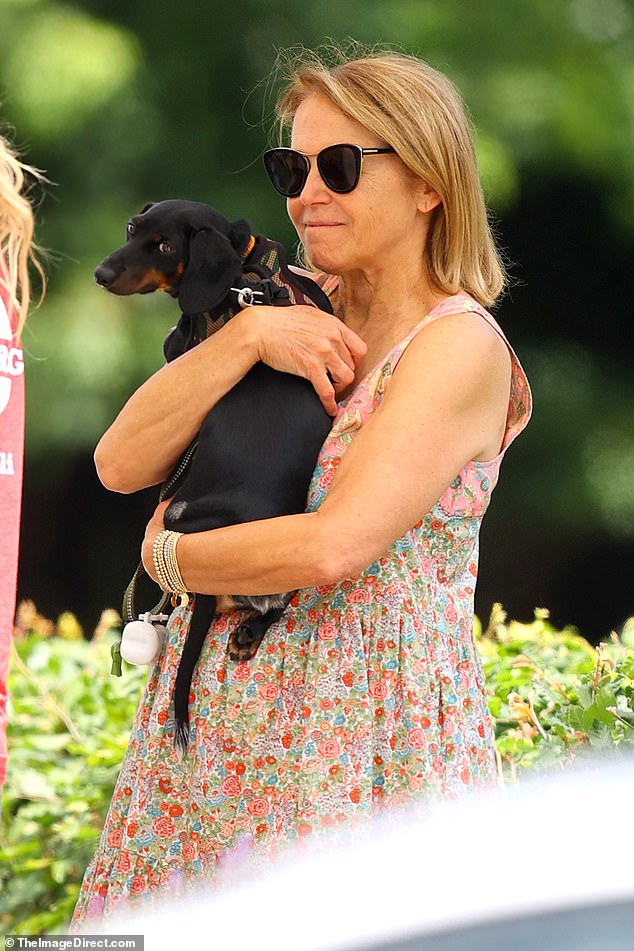 Getting some altitude: She even held the cutie pie in her arms while she stopped to chat with a friend

The former Today Show anchor was spending time in the Hamptons after her husband John Molner drew plenty of online ire after he conflated the Supreme Court recently striking down the 1973 Roe v. Wade precedent with his flight being canceled.

In an Instagram post featuring a photo of a Delta plane in flight, he wrote in his caption that it was ‘a sad day in our nation.’

‘Roe v Wade has been repealed,’ he continued. ‘Additionally, the Court has struck down New York gun safety laws restricting people from carrying concealed weapons. And Delta Airlines continues its descent toward becoming the worst major US airlines, canceling scores of flights daily, stranding passengers for days and holding them hostage to higher fares. It’s not as bad as rolling back reproductive rights but it’s pretty aggravating.’

The comments he received included plenty of vitriol about his decision to pair his personal inconveniences with women who lost their right to an abortion in several states across the US. 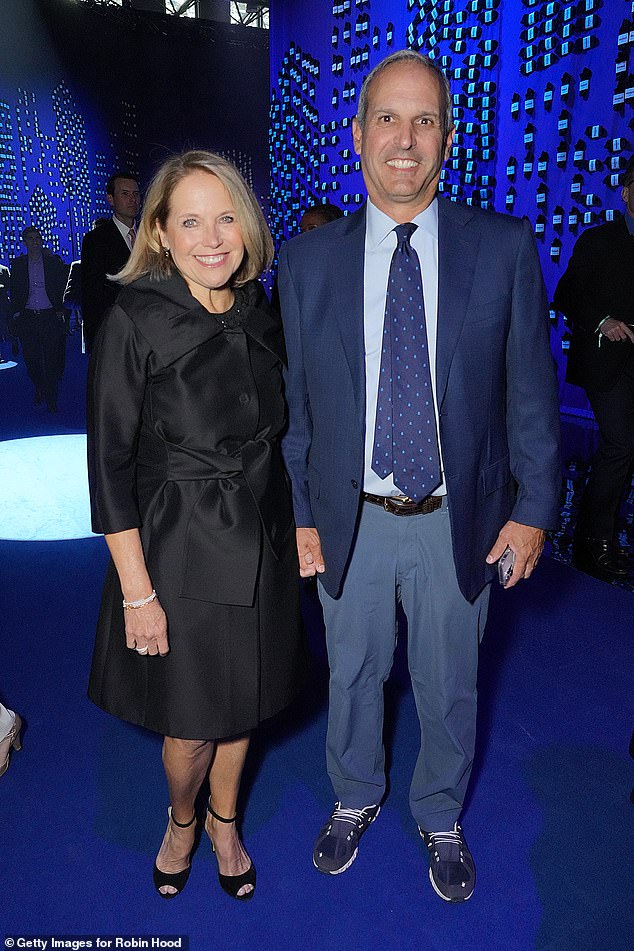 Tone-deaf: Her husband John Molner took fire on Instagram after he compared having his Delta flight canceled to the Supreme Court striking down the 1973 Roe v. Wade decision; seen in May in NYC

Katie and Molner, a financier, began dating in 2011, and they got engaged in September 2013.

The couple wed in a private ceremony at her Hamptons home in June of 2014.

Katie, who worked for Yahoo News until 2017, let her contract expire at the end of that period so that she could focus on running her own company Katie Couric Media with her husband. 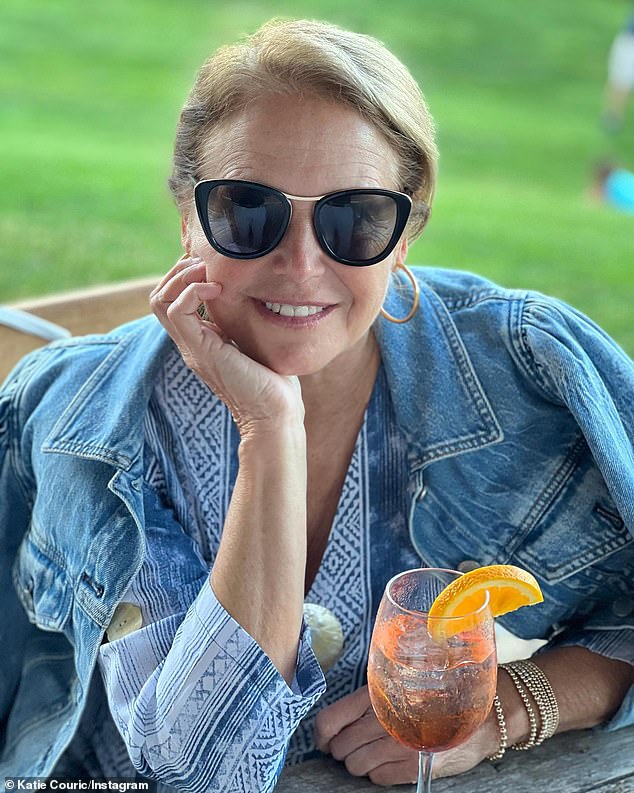 Business: Katie, who worked for Yahoo News until 2017, let her contract expire at the end of that period so that she could focus on running her own company Katie Couric Media with her husband