Katharine McPhee, 35, hearkens back to her American Idol days as she belts out a song while clad in a string bikini aboard yacht… on Capri honeymoon with new husband David Foster, 69

And Katherine McPhee, 35, and her her new husband David Foster, 69, appeared to be living it up as they continued to soak up the sunshine during their honeymoon in Capri on Friday.

Brunette beauty Katherine hearkened back to her American Idol days she belted out a song — complete with an energetic dance routine — while relaxing in a yellow string bikini aboard a luxury yacht. 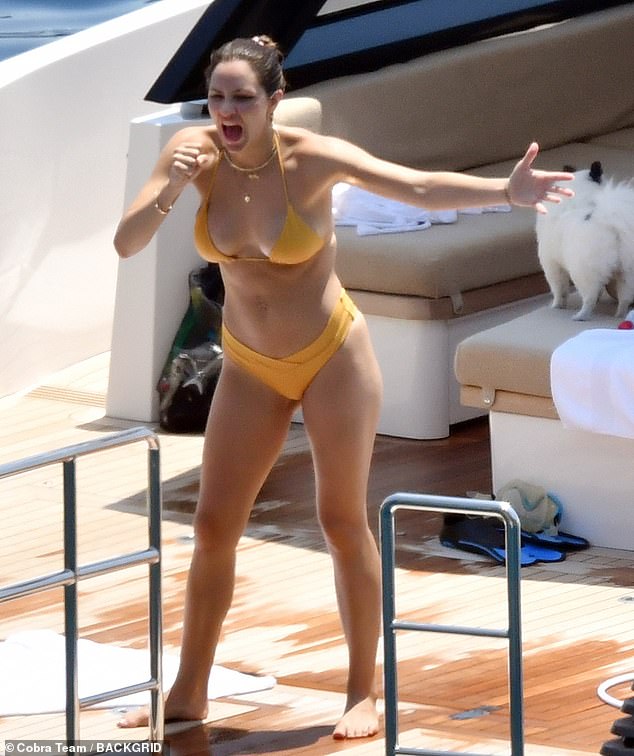 Making a song and dance of it: Katherine McPhee performed an impromptu song and dance routine as she continued to enjoy her honeymoon aboard a yacht in Capri on Friday

The star, who runner-up on American Idol’s fifth season in 2006, looked sensational in her swimwear of choice, which she teamed with gold necklaces and a bracelet.

With her chestnut brown locks tied up in a relaxed bun, she sang into an imaginary microphone, before enjoying a cooling swim in the welcoming Mediterranean Sea.

Shielding her eyes from the intense summer sunshine with a pair of stylish aviator shades, the displayed her natural beauty as she went makeup-free. 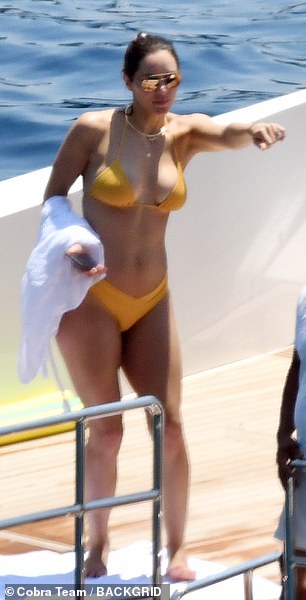 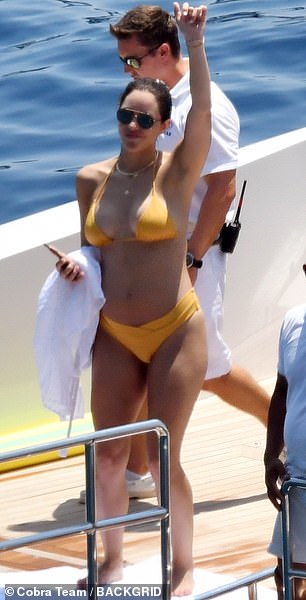 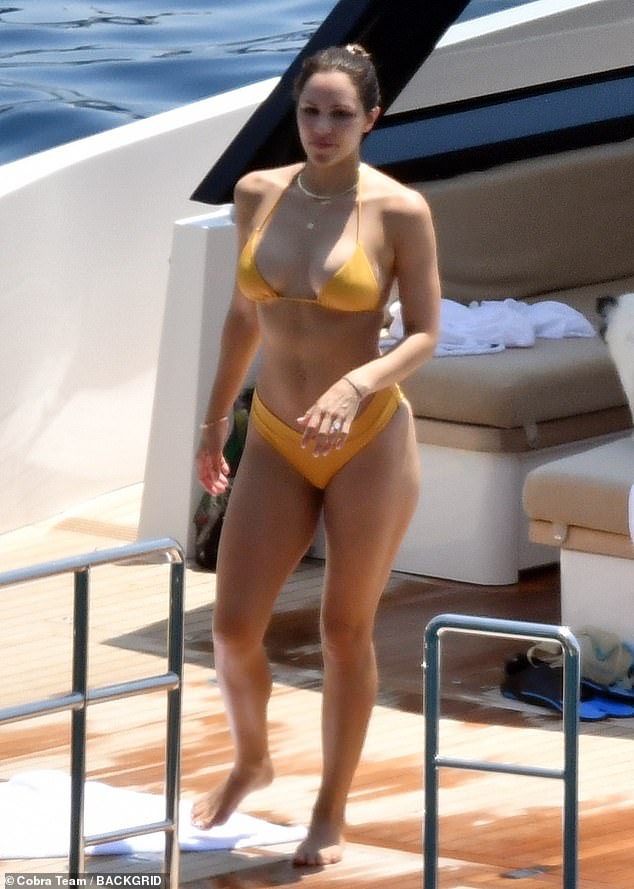 Golden girl: The singer, 35, teamed her swimwear of choice with gold necklaces and a bracelet 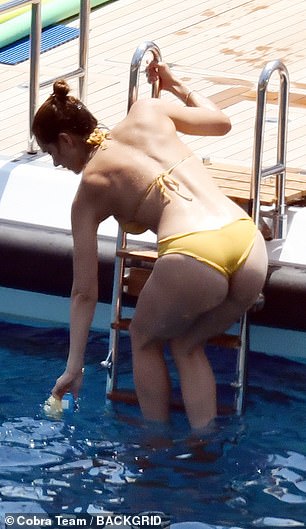 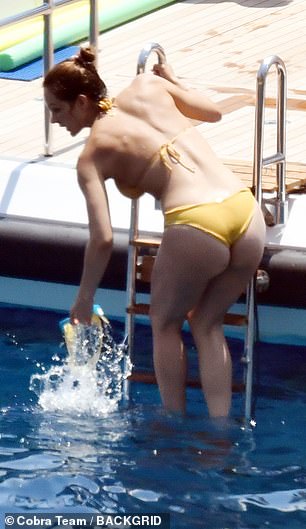 Making a splash: After basking in the sunshine, she descended into the waters for a cooling dip 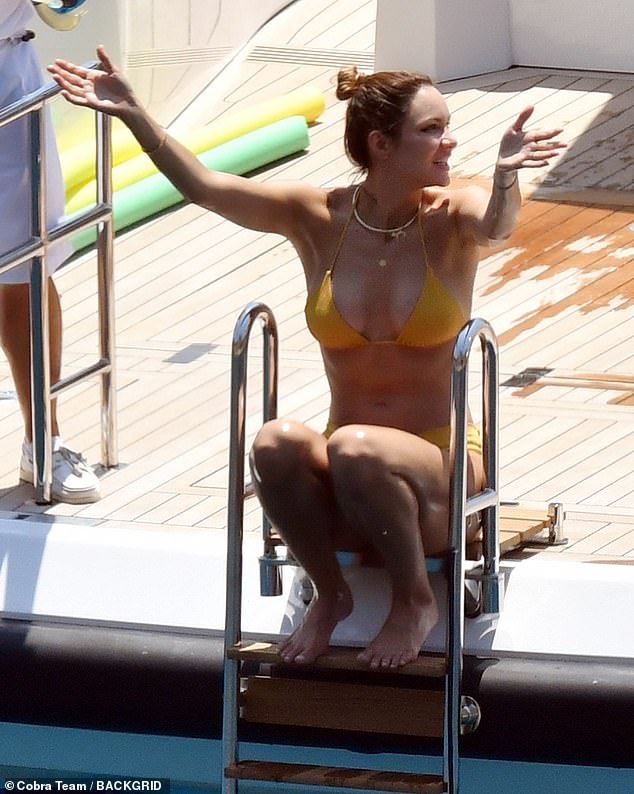 Tress-ed to impress: Katherine opted to wear her chestnut brown locks tied up in a relaxed bun

Days earlier, Katherine put on a sizzling display as she honeymooned with David on the Amalfi Coast.

Katharine exhibited her enviable frame in a busty black string bikini as she joined David for an idyllic yacht trip in Capri.

The Waitress actress flaunted her buxom bust and toned midriff in a tiny bikini top as she prepared to dive into the crystalline waters for a spot of snorkelling.

She paired this with a pair of scanty bikini bottoms, which drew the eye to her bronzed legs and peachy derriere as she dived overboard.

Her tresses were pulled into a tousled ponytail while the star showcased her natural beauty by going make-up free. 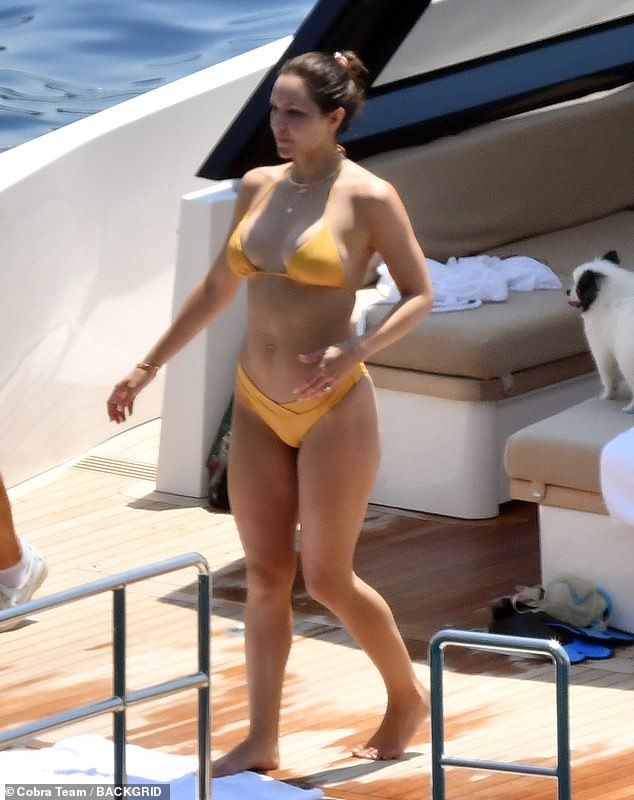 Toned: The American beauty looked tanned and toned as she wandered around the deck

Break: Katherine and her husband have been holidaying in Italy since their London wedding 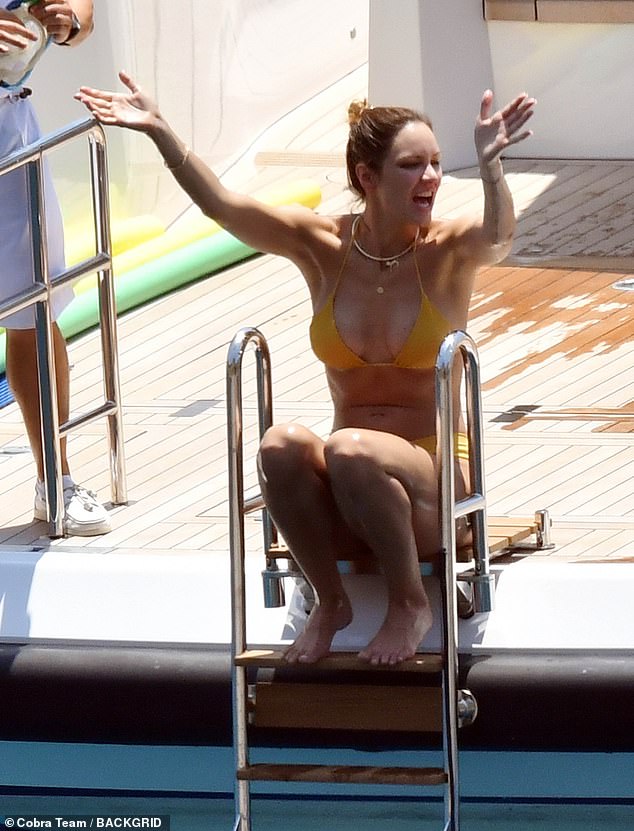 Success: Katherine shot to fame after landing the runner-up position on American Idol in 2006 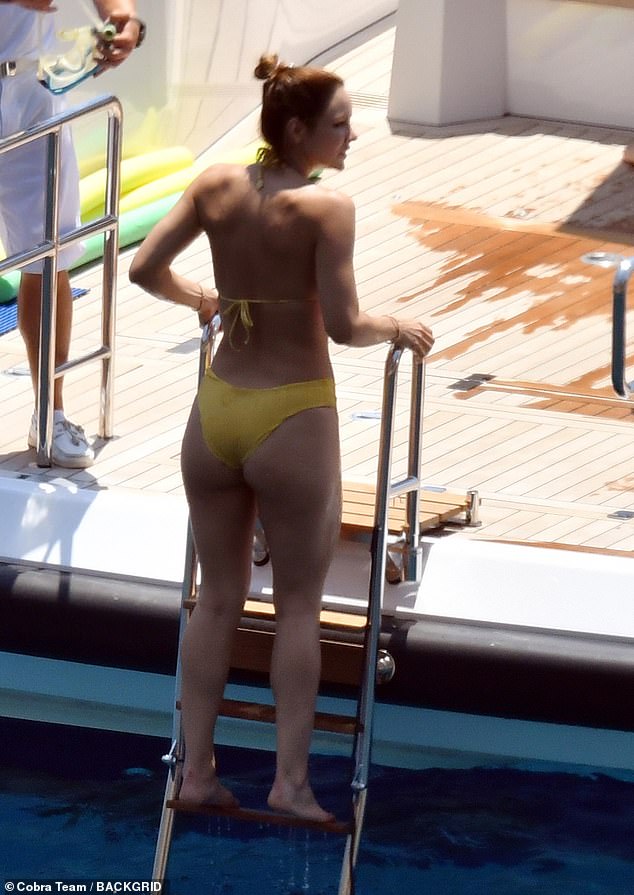 Exploring: She has been seen exploring the Amalfi coast with David since they arrived in Italy

Katharine and David were every inch the happy couple as they chatted aboard the boat, with the hunk shooting his new bride a loving look.

The happy outing came days after the couple said their vows in front of famous friends and family.

During the ceremony the singer wore a custom strapless ivory Zac Posen gown and afterwards she changed into her ‘something blue’ in a strapless blue silk tea-length dress.

There were nearly 100 guests at the wedding, including David’s two daughters, Sarah and Erin, whom he shared from a previous marriage with Rebecca Dyer.

The singer has changed her legal name after getting wed and took to Twitter after the ceremony, writing: ‘Introducing Katharine Foster’. 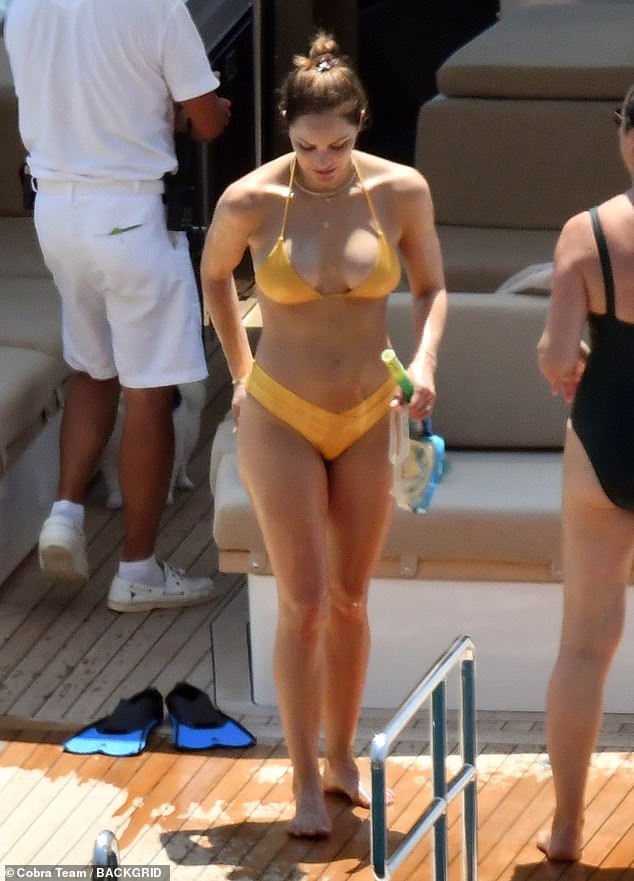 Swim: As her day progressed, she grabbed some snorkel gear for another venture into the sea

Natural beauty: The star let her natural beauty shine through as she opted to go makeup-free 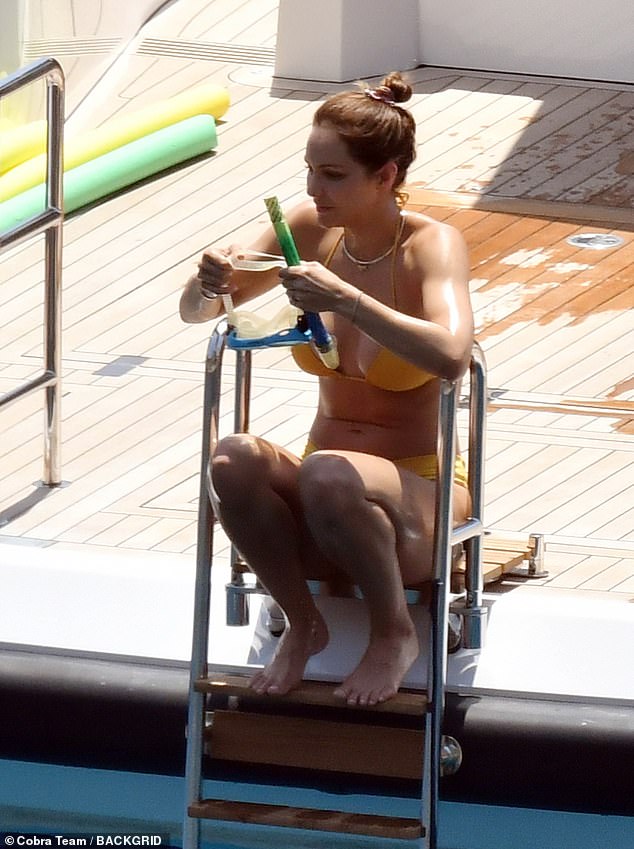 Catered to: Throughout their luxury break, the couple’s needs have all been catered to by staff 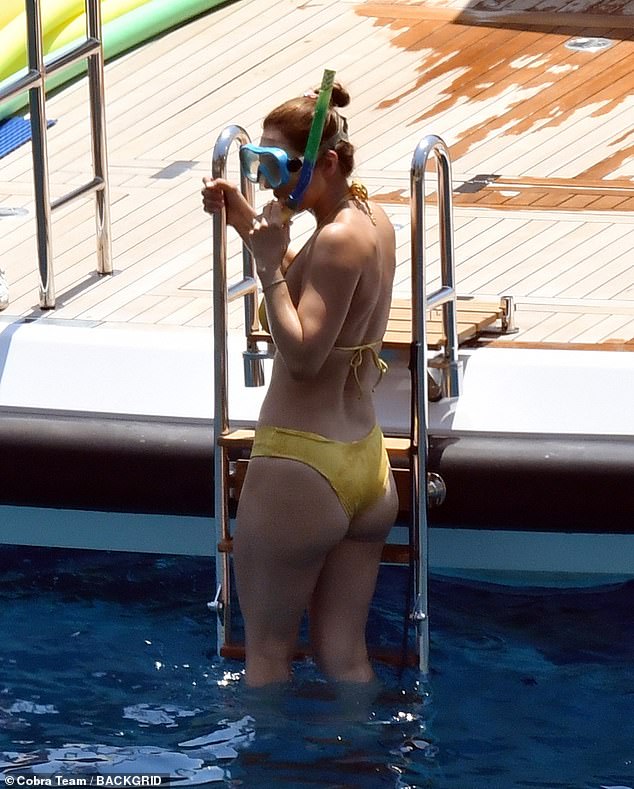 Wedding: The outing came days after the couple said their vows in front of friends and family

Katharine’s big day came after she took to Instagram to pay a sweet tribute to now-husband David, as at the time they were just hours away from tying the knot.

In her pre-wedding post, Katharine shared a clip of her cover of the Wizard of Oz classic Somewhere Over The Rainbow, as she told fans it was released 13 years to the day before her wedding.

The caption read: ‘Exactly 13 years ago today my very first single, Somewhere Over The Rainbow, was released right after Idol.

‘Today… I’m marrying the man who produced it. Life is full of beautiful coincidences, isn’t it? Thank you for taking me over the rainbow, David. ‘

The two sparked dating rumours back in May 2017 while having dinner at Nobu in Malibu and haven’t spoken much about their relationship to the public. 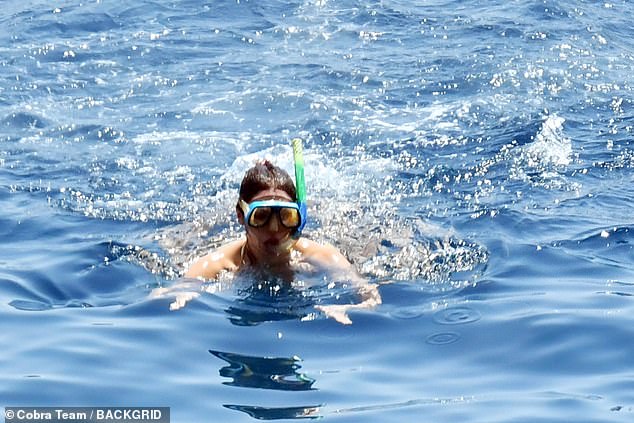 Gown: During the ceremony, the singer wore a custom strapless ivory Zac Posen gown and afterwards she changed into her ‘something blue’ in a strapless blue silk tea-length dress 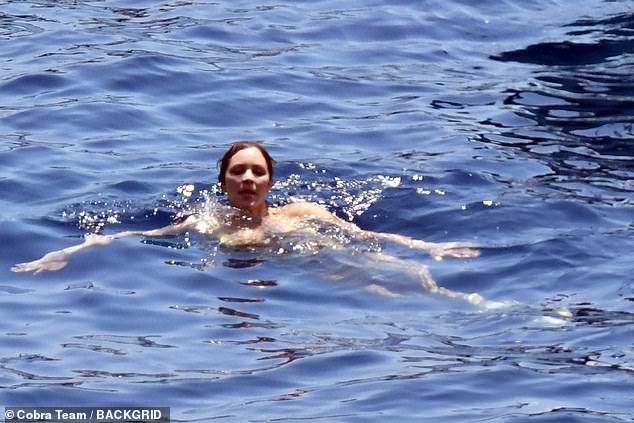 Loved ones: There were nearly 100 guests at the wedding, including David’s two daughters, Sarah and Erin, whom he shared from a previous marriage with Rebecca Dyer 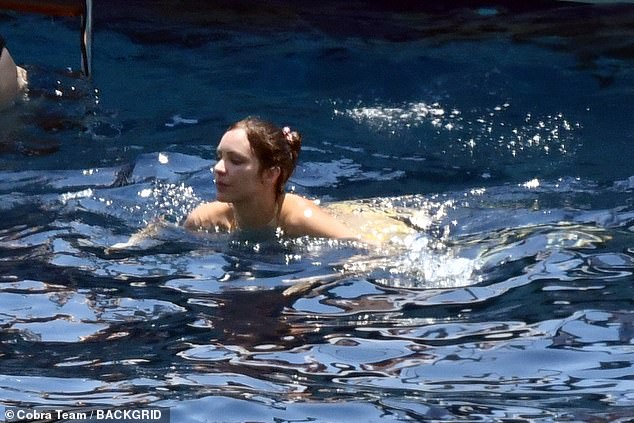 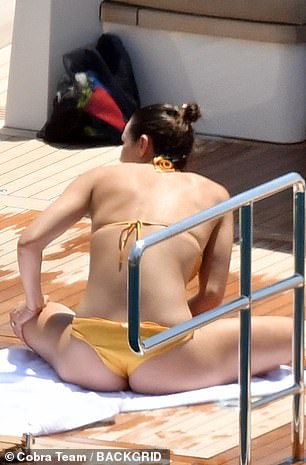 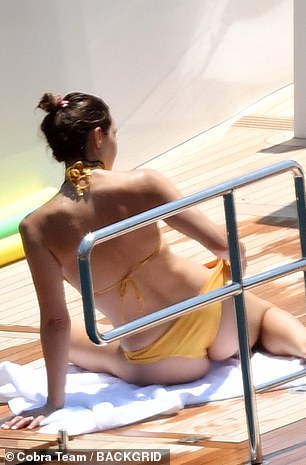 Stretch: During her time on the deck, Waitress star Katherine enjoyed a long stretch session

David proposed to Katharine back in July 2018 on top of a mountain in Anacapri, Italy.

Katharine was previously married to Nick Cokas from 2008 to 2016 where Foster played the piano at their wedding.

David has been married four times and has five daughters and seven grandchildren, his last marriage to Yolanda Hadid came to an end in 2017.

He was first married in 1972 to singer B.J Cook and the couple had one daughter, Amy, before divorcing after just under 10 years of marriage.

David married his second wife Rebecca Dyer in 1982 and they had three daughters, Sara, Erin and Jordan. They ended their marriage after four years in 1986. 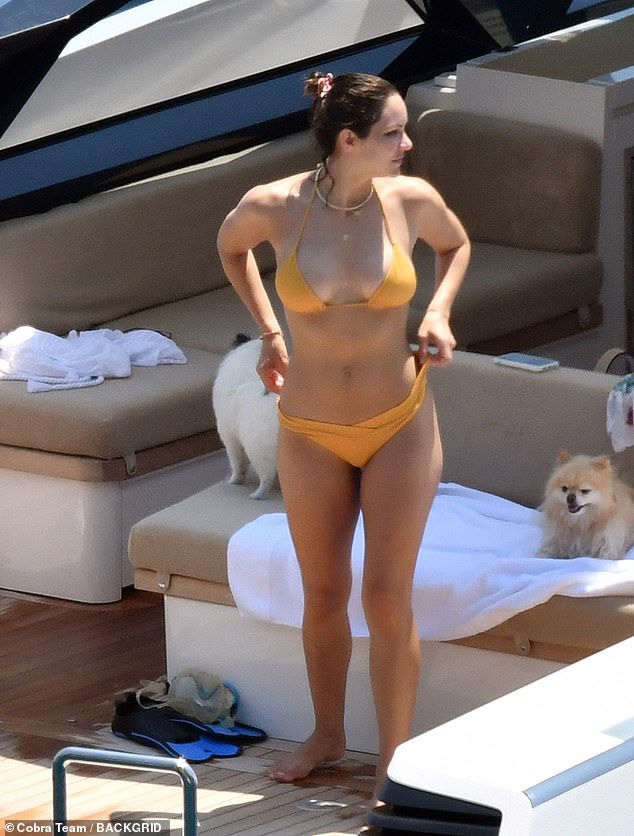 Trip down the aisle: Katharine was previously married to Nick Cokas from 2008 to 2016 where Foster played the piano at their wedding 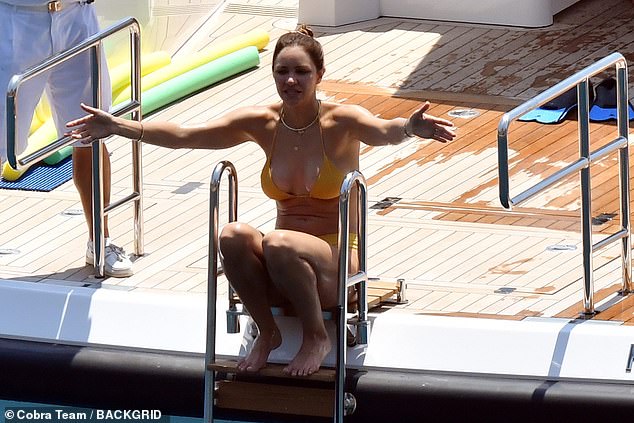 Sparking dating rumours: Katherine and David sparked dating rumours back in May 2017 while having dinner at Nobu in Malibu, California

Keeping things quiet: The lovebirds haven’t spoken much about their relationship to the public

Moving onto his third marriage, the record mogul wed actress Linda Thompson in 1991 and they collaborated on songs together throughout their marriage – but ended things in 2005.

During this marriage, David was step-father to Linda’s sons with Caitlyn Jenner, Brody and Brandon, who grew up living in his home in Malibu.

After a nine year relationship and four years of marriage, David and the Real Housewives of Beverley Hills star called it quits in 2015, officially divorcing in 2017. 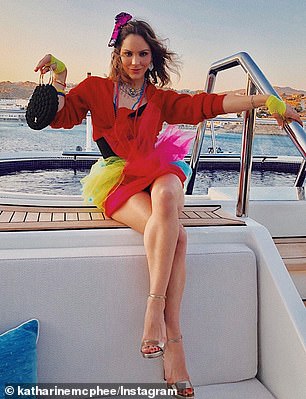 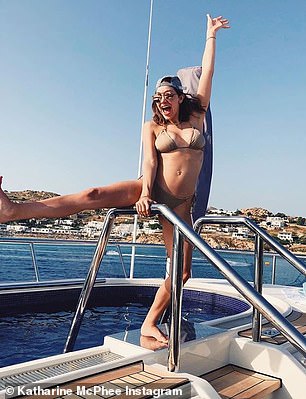 In a great mood: The star also documented her bachelorette getaway in Mykonos by sharing pictures on social media (left on June 21 and right on June 24) 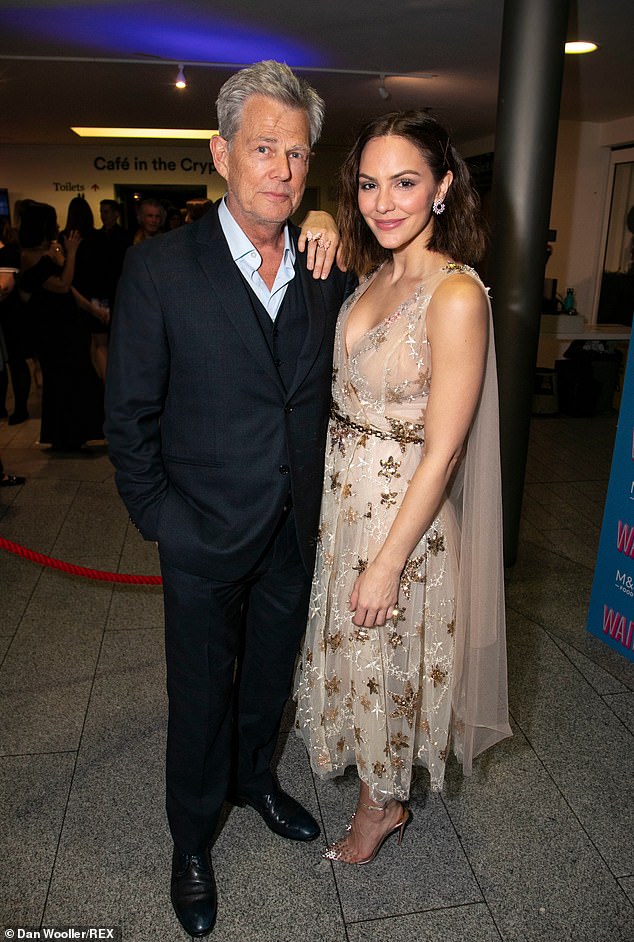 Married man: David has been married four times and has five daughters and seven grandchildren… his most recent marriage was to Real Housewives of Beverly Hills star Yolanda Hadid, the couple divorced in 2017 (pictured together in March)