Kate Hudson, 42, models a yellow swimsuit while on the beach in Greece with daughter Rani, two, and partner Danny Fujikawa, 35… before taking off in a speedboat

Kate Hudson was back on the beach in Greece on Thursday afternoon as she enjoys an extended vacation in the Mediterranean.

The Almost Famous actress, 42, wore a bright yellow one-piece swimsuit as she was seen hanging out with her mini me daughter Rani Rose, aged two, and her long-term partner, Danny Fujikawa, 35.

The couple enjoyed time on a speedboat, where the Fabletics co-founder worked on her summer tan.

Beach day: Kate Hudson was back on the beach in Greece on Thursday as she enjoys an extended vacation in the Mediterranean

She was also spotted manning the speedboat as Kurt jumped into the water.

The actress looked every inch the pro as she sat at the wheel of the vessel. 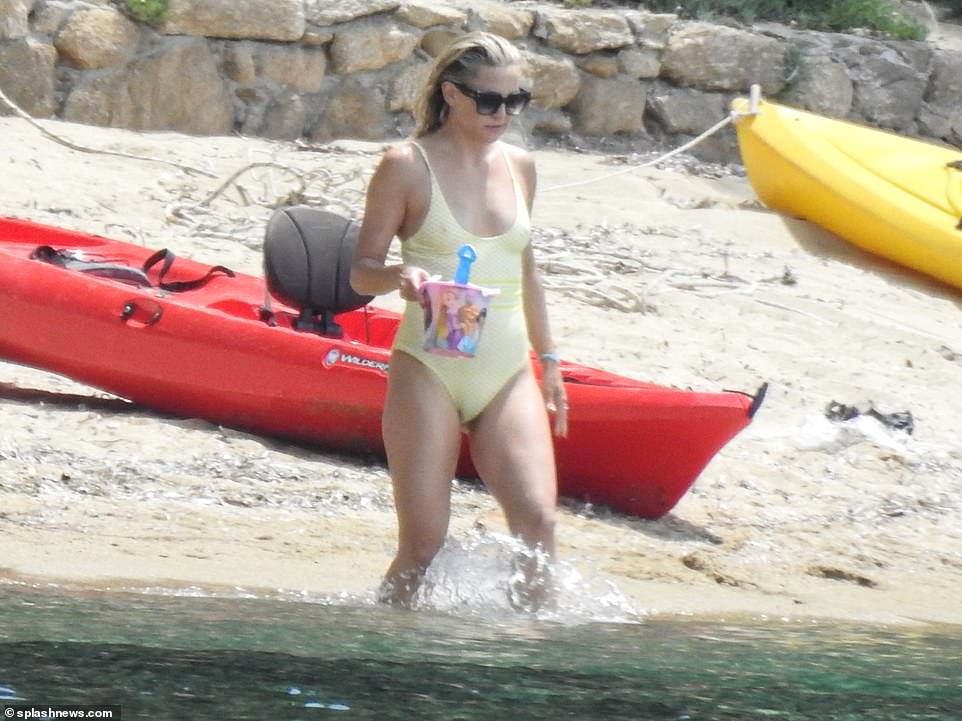 Making a splash! Hudson ventured out into the water carrying her daughter’s beach toys

Beach babe! The How To Lose A Guy In 10 Days actress put her gym-honed body on display 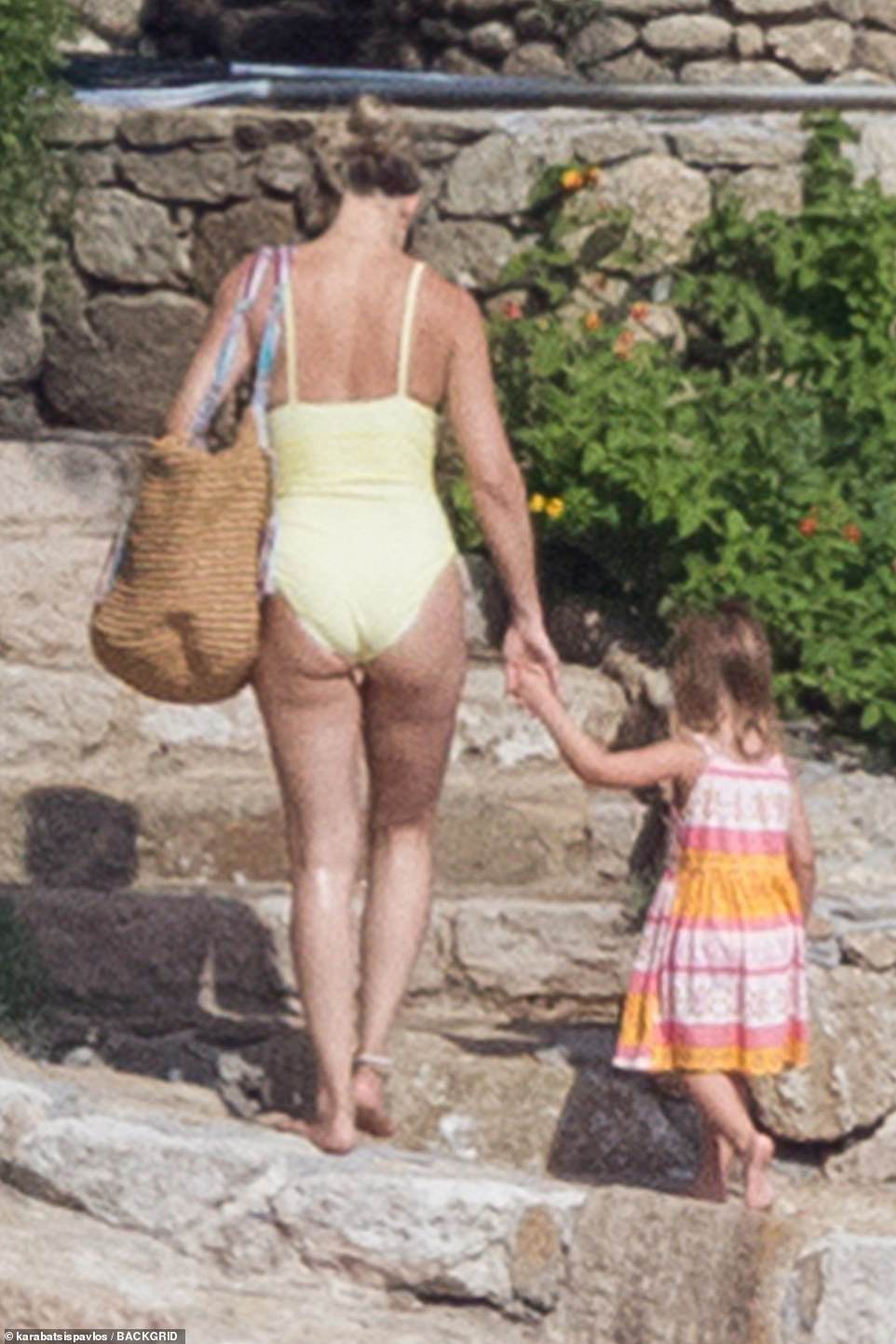 Loving mommy: The veteran Hollywood actress was seen carrying a heavy bag as she held hands with her girl who wore a dress 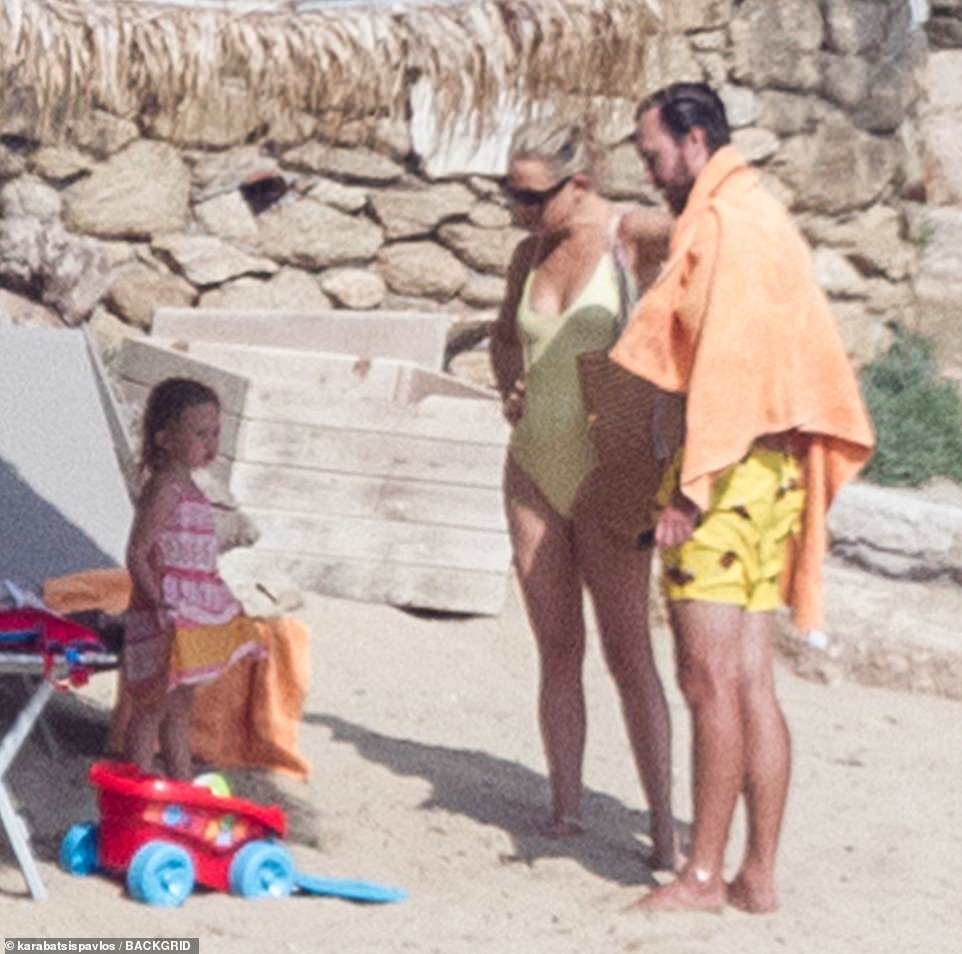 Kate and her family have been in Greece for over a week as they stay close to the beach.

Last week the Bride Wars star shared that she wants her little girl to naturally take to exercising as Goldie and Kurt did for her when she was growing up: ‘It’s how I was raised. It’s engrained in my brain that honoring and working our body is a gift.’

The Oscar nominee was seen in two images with her child to drive her point home.

The note began: ‘Those who recover together… maybe you can finish the sentence.’ 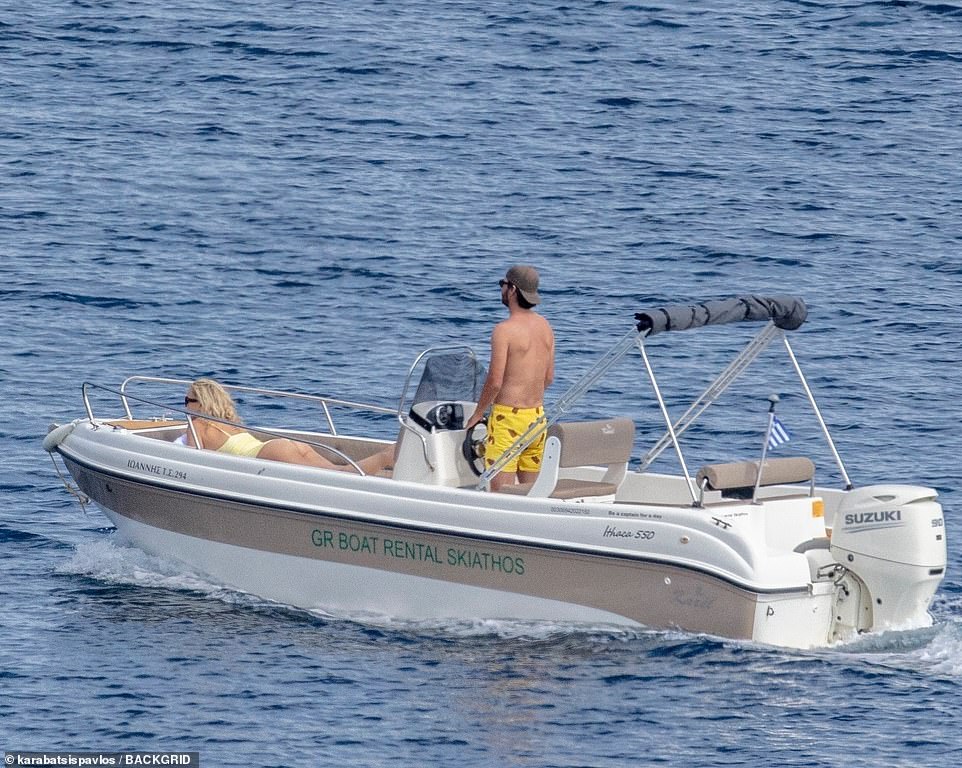 Chilled at sea: Danny was at the wheel while Kate lay tummy down in the front of the speedboat rental 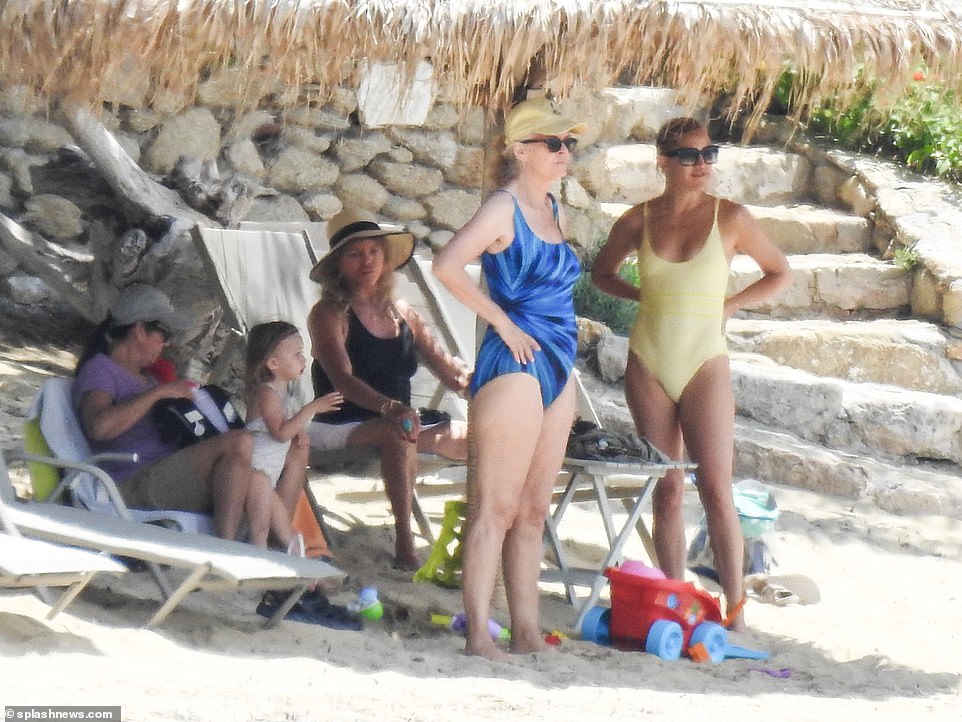 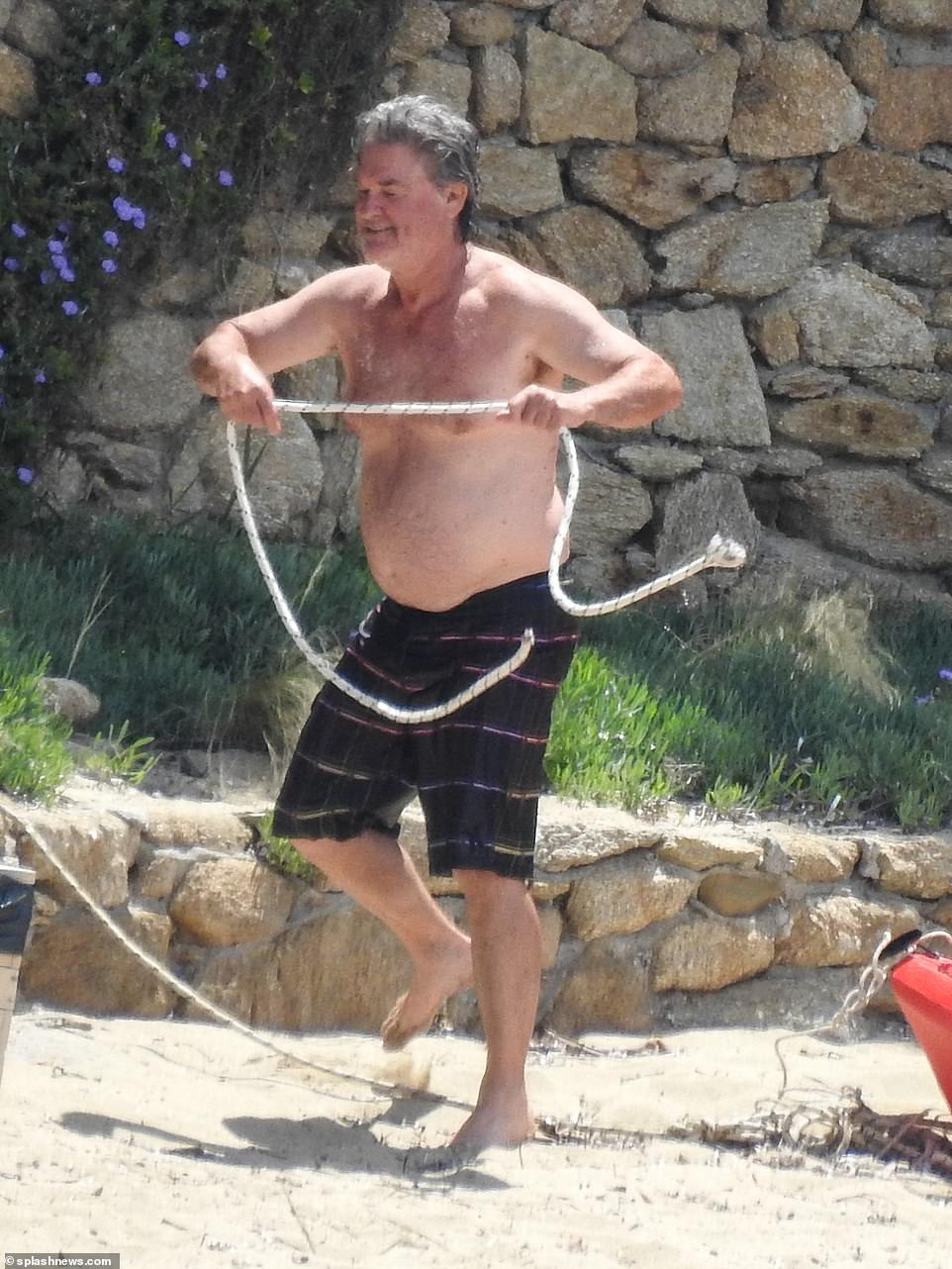 Then she mentioned her movie star parents: ‘I grew up witnessing my parents take care of their bodies,’ added the Bride Wars standout.

‘People always ask me how I get motivated to stay in shape. The answer is, it’s what I know. It’s how I was raised. It’s engrained in my brain that honoring and working our body is a gift and so I don’t take it for granted.’

And it just makes her feel good, she added: ‘I loooove moving. I love when it’s challenging. I love being in charge of my results.’ 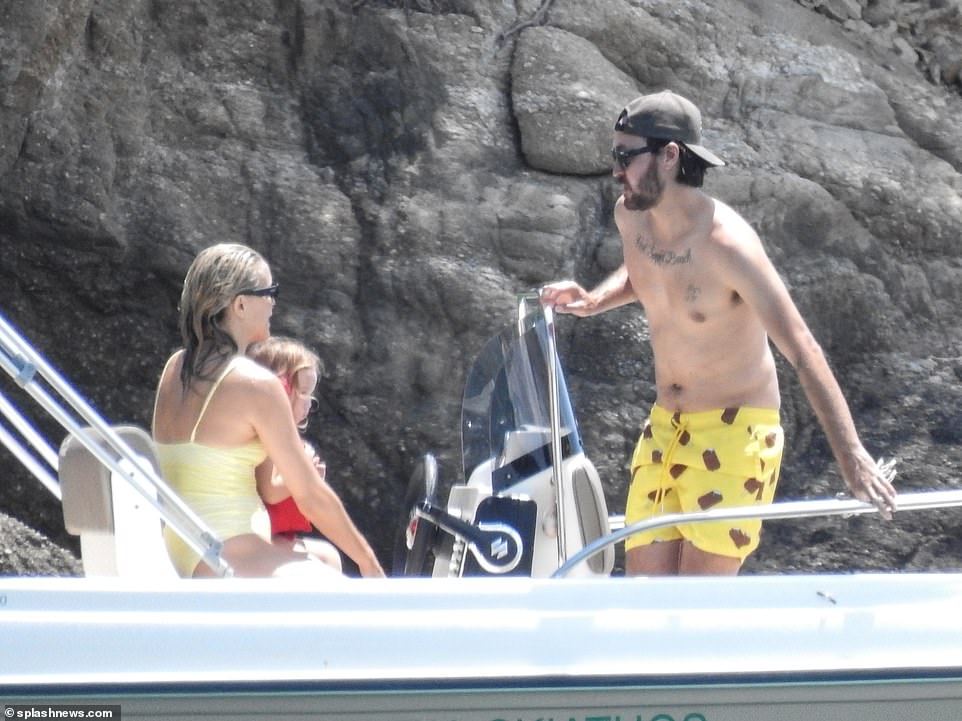 Boat loads of fun! The couple explored the scenes on boat with their daughter 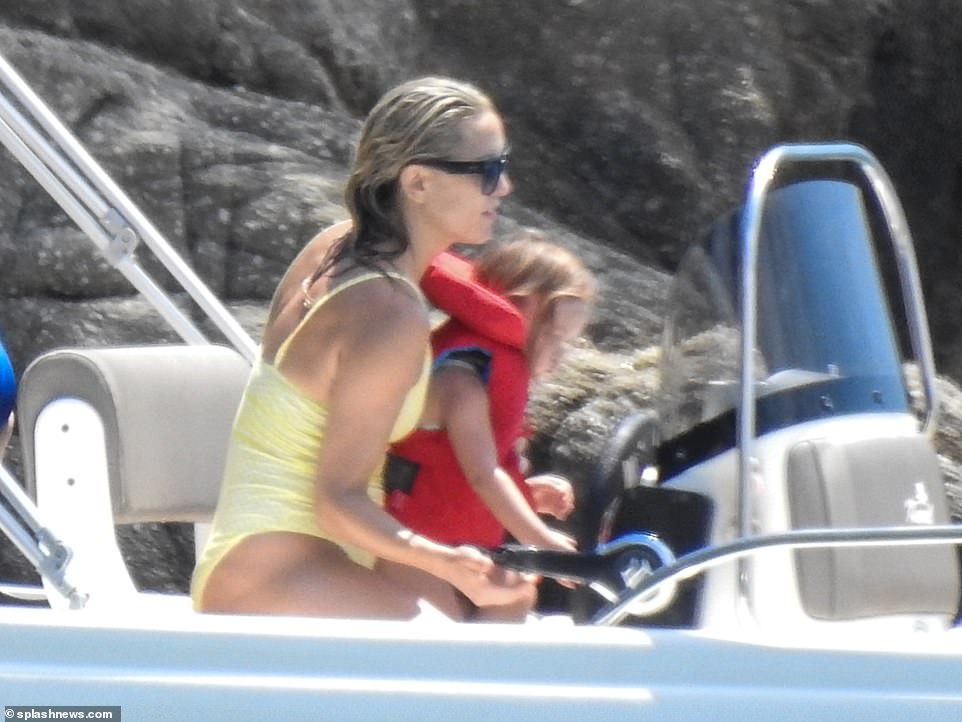 Anchors aweigh! Hudson appeared to be taking control of the vessel with her daughter on her lap 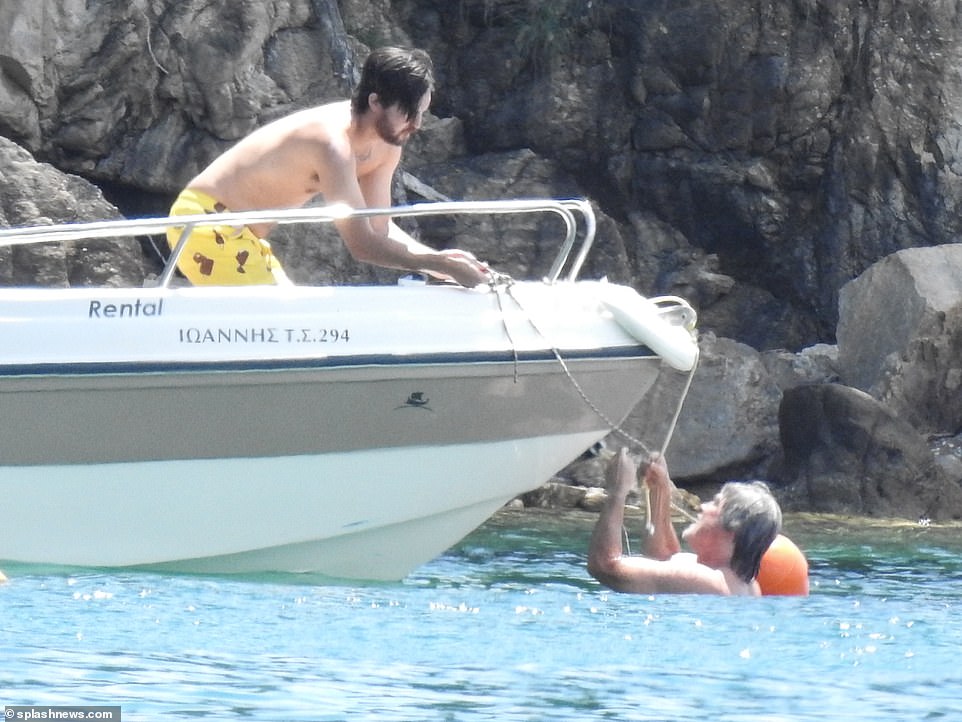 Cooling down: Kurt cooled off as he jumped into the water

Having Rani with her makes it even more of a joy.

‘And I looooove seeing my daughter have fun doing it with me. They watch everything we do! Gotta make some good moves for kids,’ she also noted.

Kate was seen in a neon green bra top with matching drawstring leggings as she lay on a floor in her home gym with her flaxen hair tucked back.

Her body looked to be in sensational shape with abs and a trim waistline as well as sculpted arms.

Next to her was her child in a red and white striped outfit that looked to be pajamas. 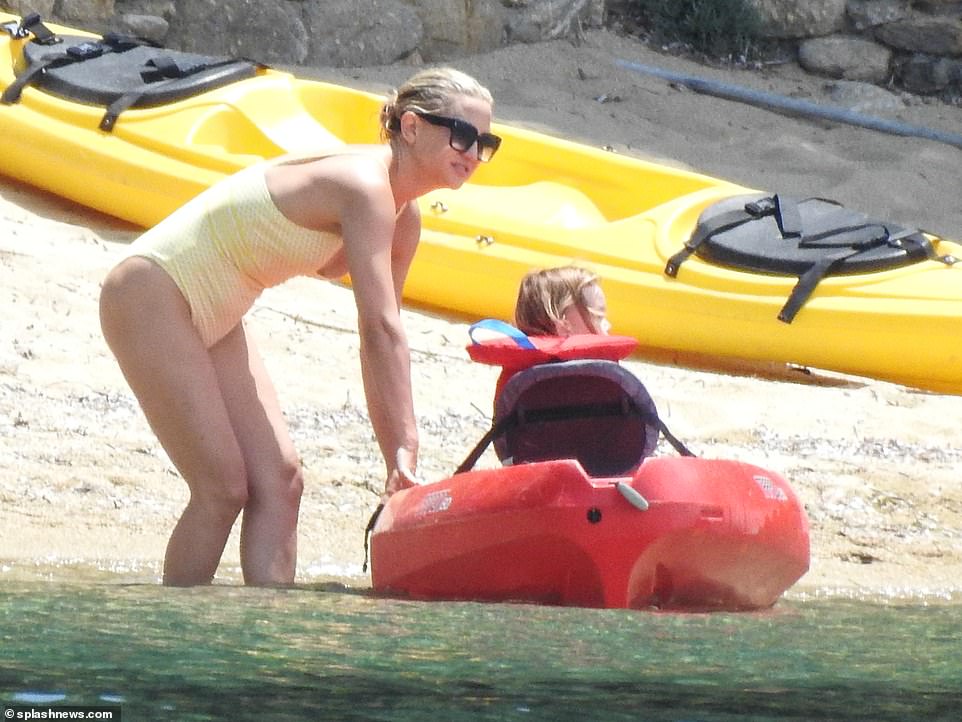 Mommy and me: Hudson guided her daughter out into the water 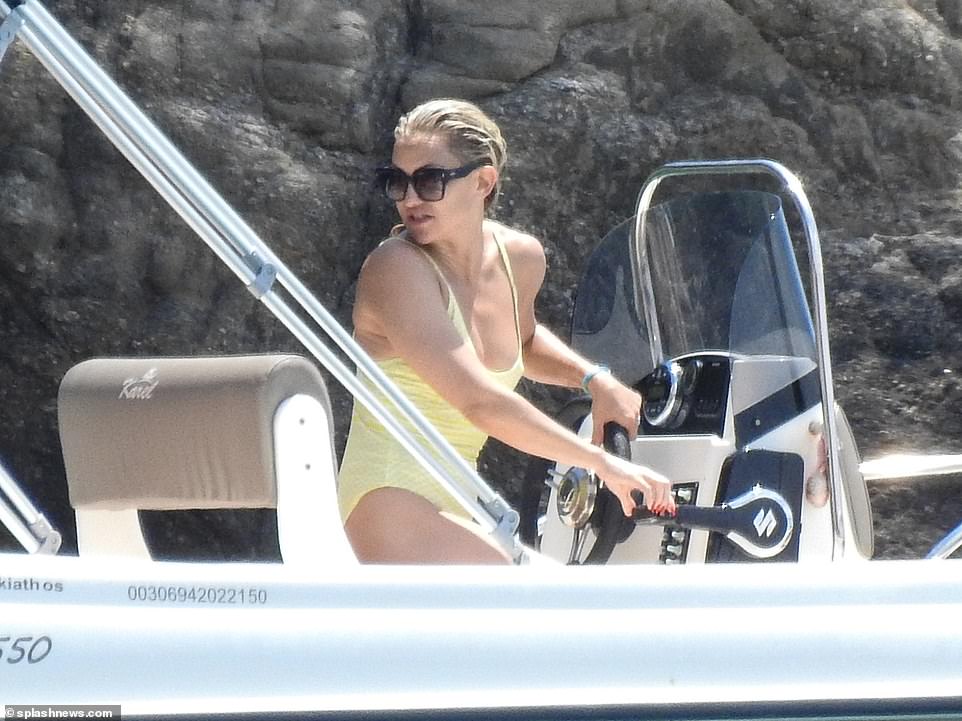 Call her Captain Kate! The actress looked every inch the pro as she manned the boat 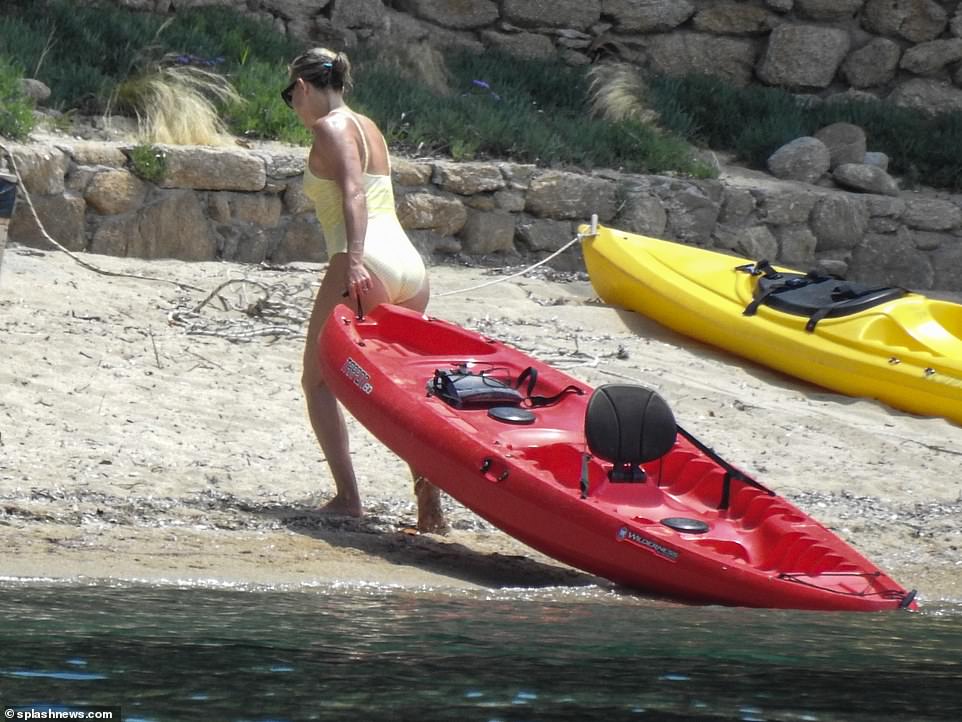 Helping out: The actress dragged the kayak out from the water 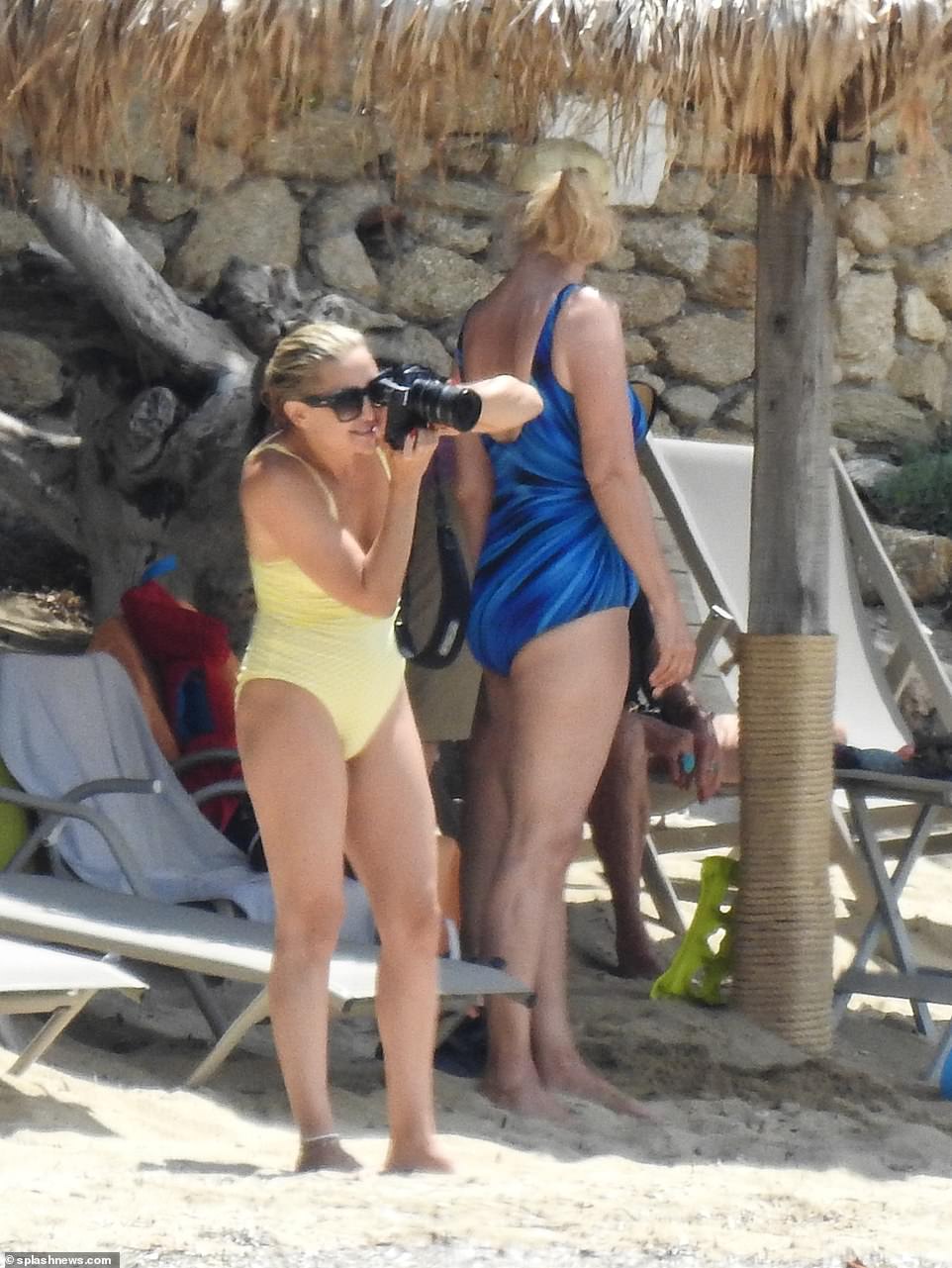 Both were using weights on their legs as they stretched their hamstring muscles.

In May, Kate was seen going through her designer duds with Rani by her side: ‘Closet clean out with my girl…Who else is ready for a Spring clean?’

And that same month Kate and Rani were both seen in their swimsuits while by a creek.

Hudson shares her youngest daughter with her partner, Danny Fujikawa, to whom she has been romantically connected ever since 2016. 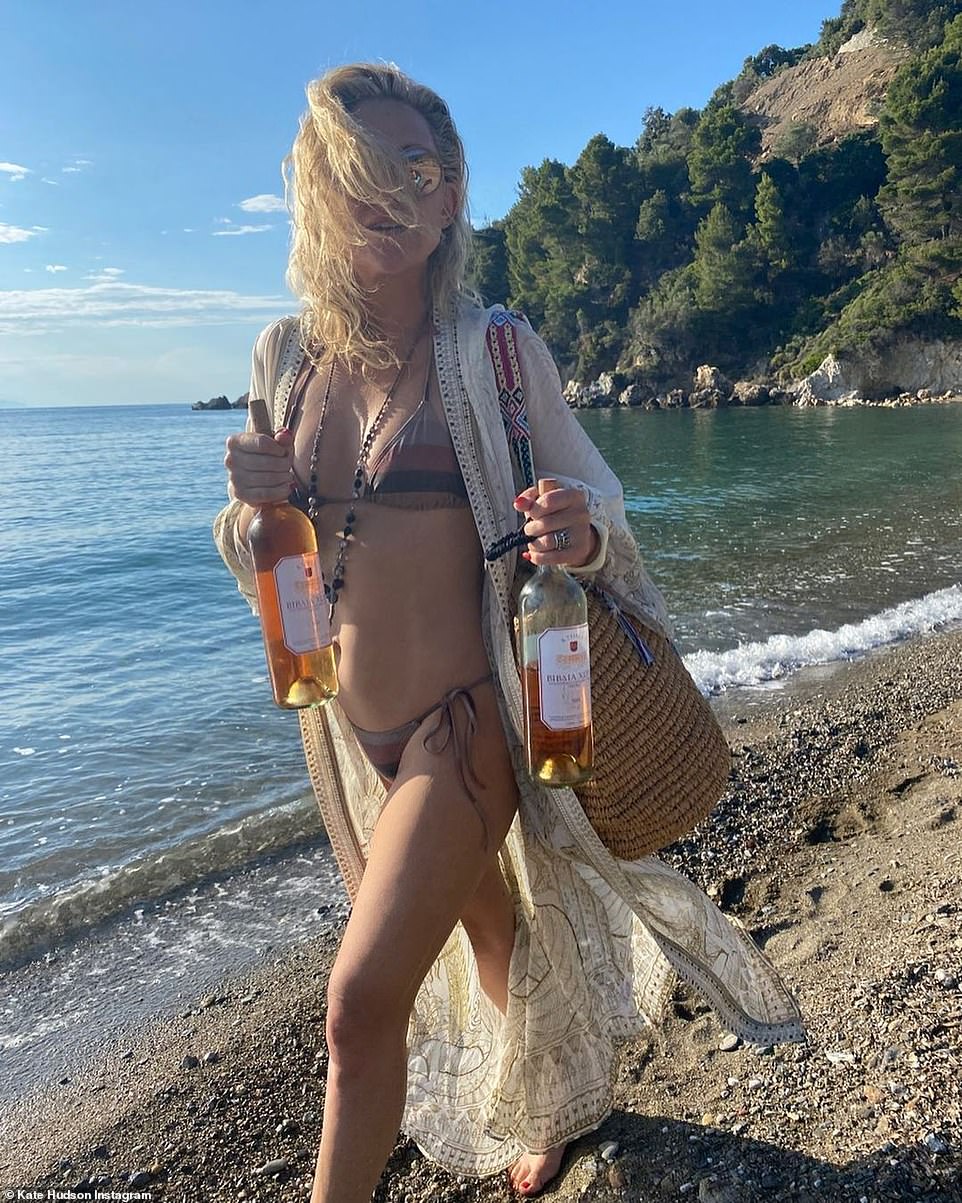 Ready for fun in the sun: The siren was seen in another bikini as she carried two bottles of wine in this Instagram post from Thursday. ‘Feels like summer,’ she said in her caption as Kelly Ripa hit the like button 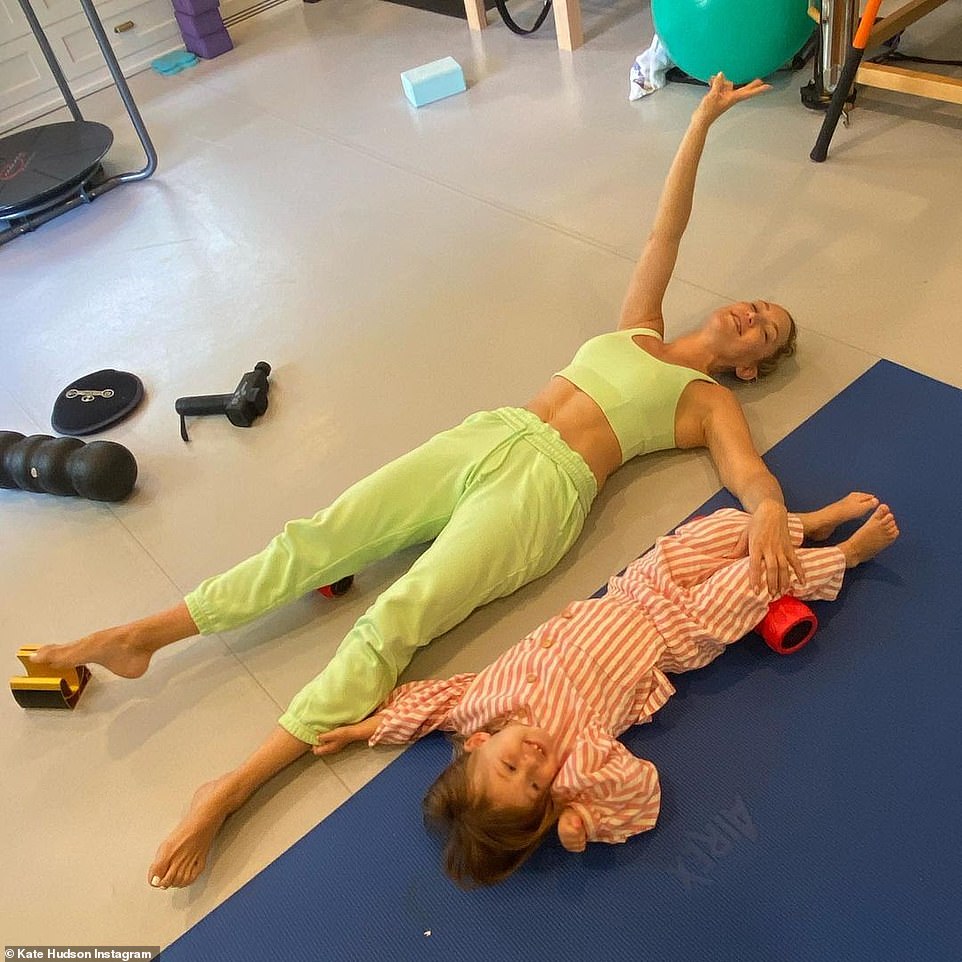 Leading by example: Hudson is often seen in her home gym with Rani. She explained why she includes her youngest child in her workout routine

Good point: ‘People always ask me how I get motivated to stay in shape. The answer is, it’s what I know. It’s how I was raised. It’s engrained in my brain that honoring and working our body is a gift and so I don’t take it for granted,’ said the movie icon

Prior to beginning a relationship with the musician, she was married to The Black Crowes frontman Chris Robinson, as they tied the knot in 2000. The two welcomed a son named Ryder Russell in January of 2004 before they separated, with their divorce being finalized in 2007.

The pair went on to announce their engagement and welcomed their son, Bingham Hawn, in 2011.

The actress and the musician ended up calling off their engagement and splitting in 2014, although they remain on good terms and co-parent their child.

Hudson first began dating her now-partner in 2016, although they had been introduced years earlier by his stepsisters, Erin and Sara Foster.

The two went on to announce the birth of Rani in October of 2018. 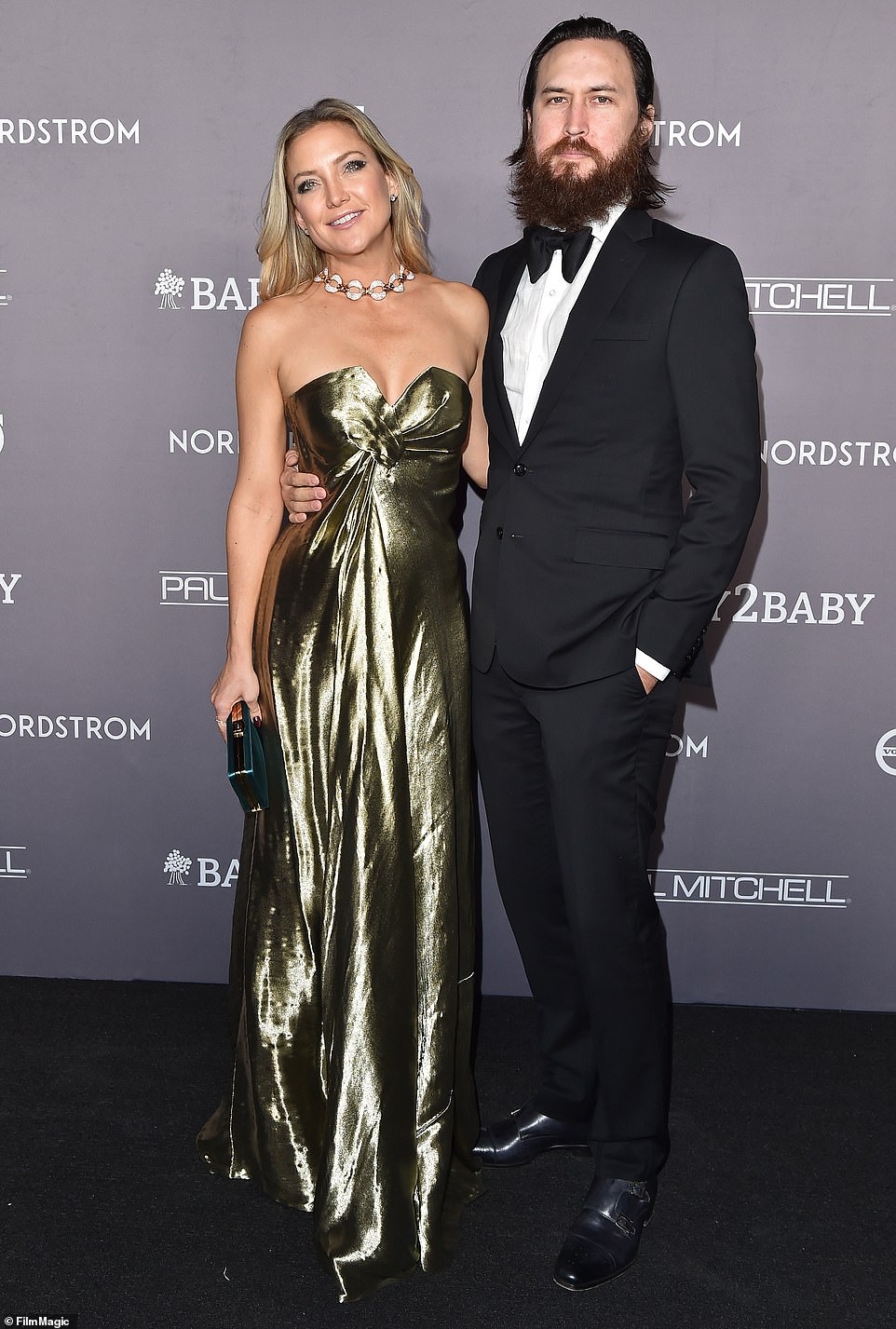 Happy couple: The actress shares her daughter with her partner Fujikawa, whom she began dating in 2016; they are seen in 2019

The actress spoke about adding a daughter to her family during an interview with AOL, and she noted that she has had to account for the fact that she is not raising a son for the third time.

‘It doesn’t really change my approach, but there’s definitely a difference…I did pretty good with the boys. But with her it’s a whole other ball game,’ she said.

Hudson then spoke about how her own upbringing has changed her approach towards both parenting and navigating through life’s challenges.

She recalled, ‘growing up as a girl with all boys, you end up with a thick skin. You really do. People say, “Oh, your brothers must’ve really protected you.” And I’m like, “They threw me right into the fire!”‘ 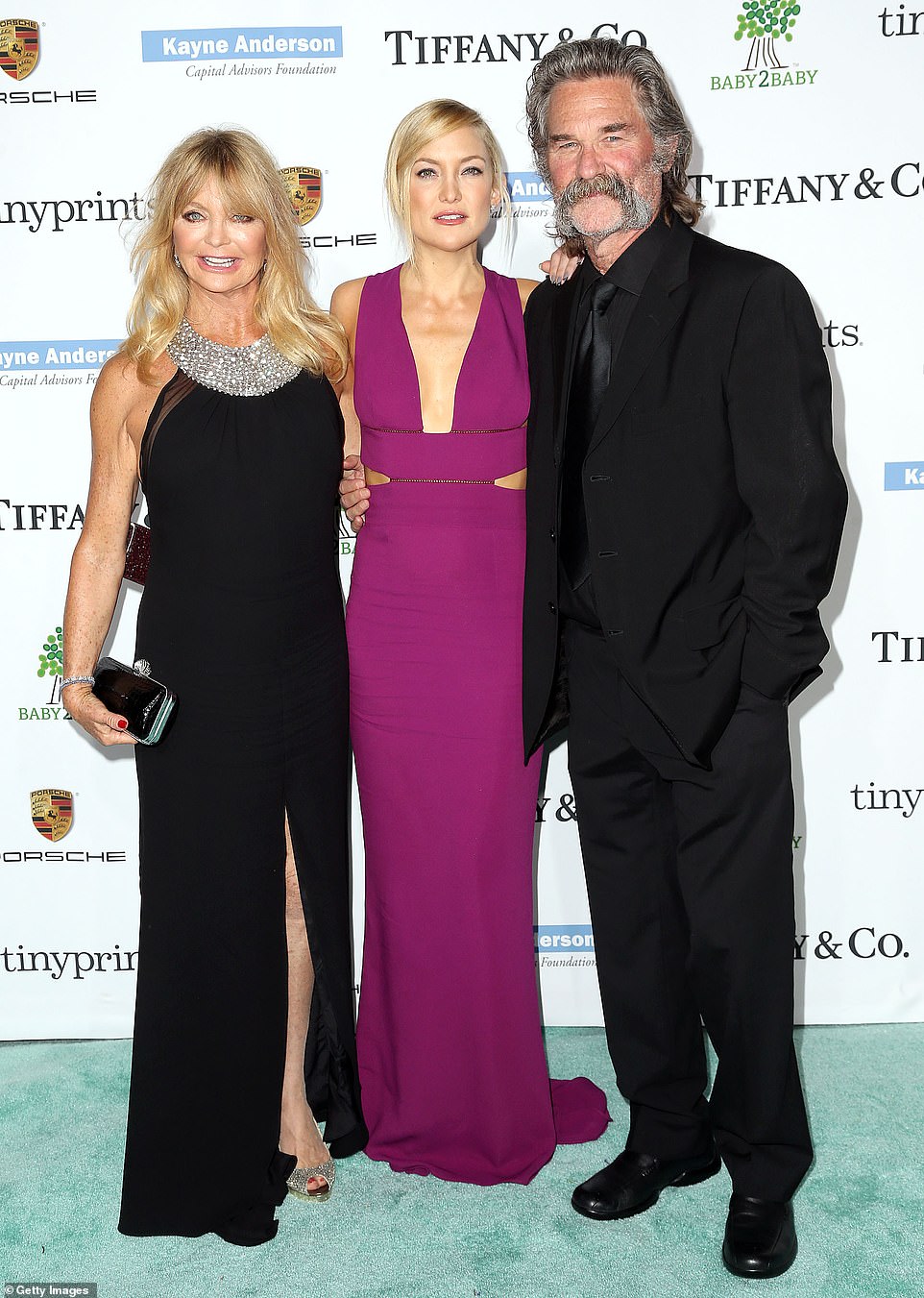 Her famous folks: Kate with mother Goldie Hawn and stepfather Kurt Russell in 2014