Kanye West has objected to Kim Kardashian’s request to terminate their marriage, and part of the reason appears to be his fear that she could marry someone else before their divorce is finalized.

Two months after Kim Kardashian asked a judge to declare her “legally single” by “terminating and bifurcating” her marriage to Kanye West, the rapper has responded with legal documents of his own. Kanye’s documents, obtained by HollywoodLife, object to Kim’s request for a separate trial for termination of the marriage. “The Court should deny [Kim]’s request for a separate trial on the termination of marital status because the motion does not provide the protections necessary for an early termination of marital status,” Kanye claims in his documents.

In his documents, he says that he is fine with Kim refiling her request to terminate the marriage, so long as certain conditions are met. “Kim’s motion should be denied without prejudice so that Kim can refile it with the mandatory corrections and requested conditions set forth in the proposed judgement,” the documents state. “Alternatively, a hearing regarding these addition conditions should be set.”

One of Kanye’s big concerns definitely seems to be that Kim could remarry once she’s declared legally single. Kanye’s response requests that marital privileges regarding custody are waived. In laymen’s terms, this means that any discussions that Kim and Kanye have about their custody arrangement can be part of the public court record. However, his filing also asks that this privilege is waived with Kim’s spouse if she chooses to remarry, which means that any conversations with the new spouse would also have to be part of public court record. Kim has been dating Pete Davidson since October, and Kanye has publicly made it clear that he does not approve of the relationship. 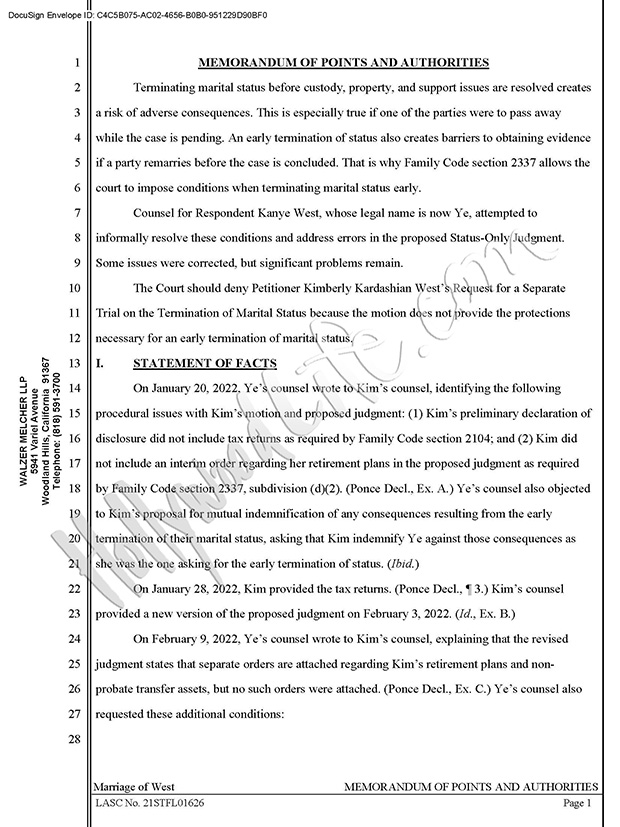 Another one of Kanye’s concern appears to be the protection of his assets. One of his conditions in the documents is that Kim should not be able to transfer assets out of any trusts they created together into a separate account.  ‘Ye’s documents also claim that Kim’s filing doesn’t protect him if Kim dies before a final judgment is reached. “The proposed condition does not create any rights to reimbursement — it would only preserve whatever rights currently exist if either party dies before entry of a property judgement,” the docs state.

A hearing on this matter is set for next month (March). Kim first filed for divorce from Kanye in Feb. 2021, but as they continue to try and hash out a settlement, she wants to restore her “single” status. Of her reason for wanting to terminate the marriage, Kim explained: “No counseling or reconciliation effort will be of any value at this time. Irreconcilable differences have existed and continue to exist between [Kanye] and me, which have caused our marriage to irretrievably break down.” 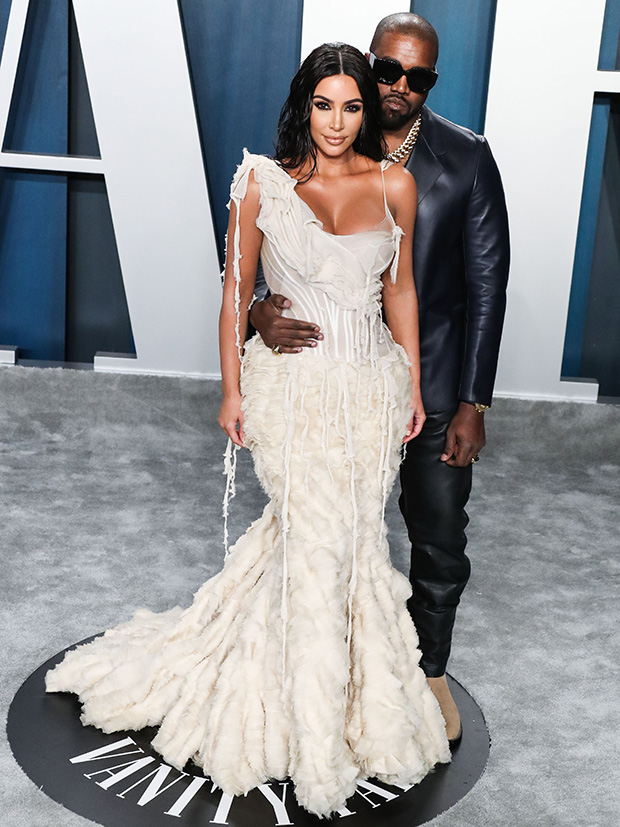 Since Kim filed these papers in December, things have only gotten worse between her and Kanye. ‘Ye has been on the attack, going after Kim and Pete on social media over the last several days. She begged him via text message to keep their affairs private, but instead, he shared said text messages on his Instagram page. Kim only publicly responded to Kanye’s disses against her once.

“Divorce is difficult enough on our children and Kanye’s obsession with trying to control and manipulate the situation so negatively and publicly is only causing further pain for all,” she said. “From the beginning I have wanted nothing but a healthy and supportive co-parenting relationship because it is what is best for our children and it saddens me that Kanye continues to make it impossible every step of the way. I wish to handle all matters regarding our children privately and hopefully he can finally respond to the third attorney he has had in the last year to resolve any issues amicably.”

HollywoodLife has reached out to a representative for Kim regarding Kanye’s objection to her request.