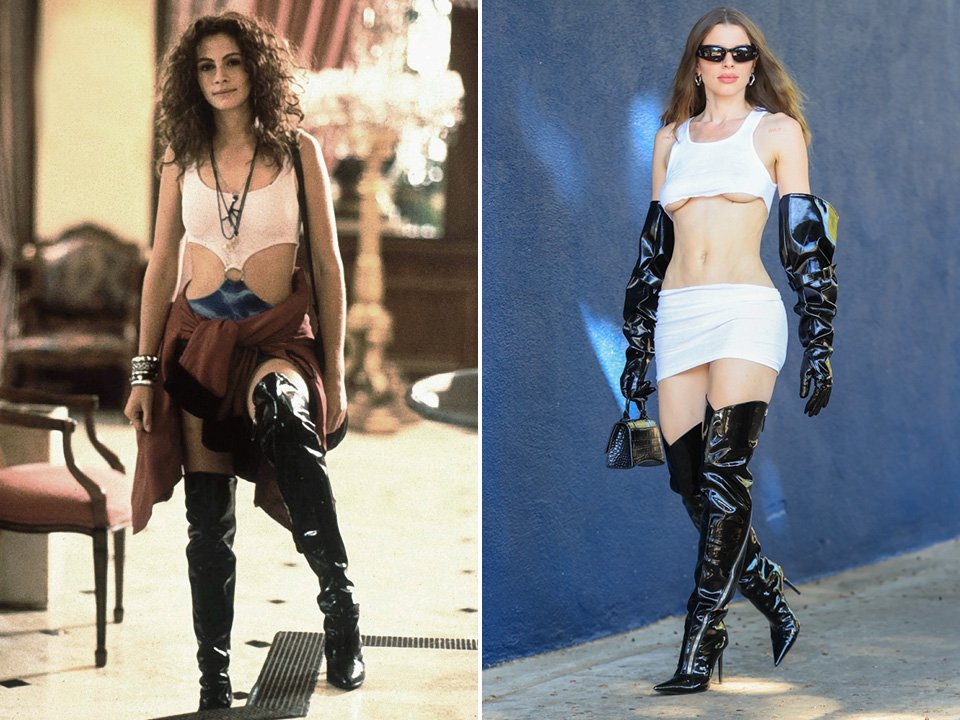 Julia Fox did her best Pretty Woman impression as she donned thigh-high patent leather boots and matching gloves on her latest outing to a Hollywood strip mall this week.

Or sorry, should that be Julia Roberts?

She also wore a barely-there outfit of a white mini-skirt and vest top, while her long brunette locks hung loose and finished off her striking look with a small snakeskin handbag.

The Italian-American actress and model accessorised her ‘fit with a pair of gold hoop earrings, nude lips, and a pair of dark designer shades.

Her racy look was definitely reminiscent of Julia Roberts’ character Vivan Ward in the 1990 classic movie, which also saw the superstar don thigh-high boots, a white vest top, and a barely-there skirt.

However, it’s fair to say Uncut Gems actress Julia gave it a very Julia Fox update with the epic gloves, which we can imagine made her a bit toasty in the Los Angeles heat.

When originally making the remarks, the model had been asked about Kanye’s visuals for his controversial music video Eazy, which showed his 41-year-old estranged wife Kim Kardashian’s new partner Pete Davidson, 28, being beaten up by a skinhead monkey, after being beheaded.

Julia said at the time: ‘I just think that’s his artistic, creative expression. I know it’s aggressive but if it really came down to it, I don’t think Kanye would hurt a fly.’

However the actress has since claimed that she was only commenting on the music video and was unaware of the Instagram post Kanye had made at the time.

‘Believe it or not, I have a life and a son, and I don’t have google alerts for this man!’

The actress has also since said that at the time of the comments, she had no idea about Kanye’s racial slur towards Trevor Noah.

When presenting the Daily Show, host Trevor weighed into the highly publicised clash between the Skims founder and her ex, saying that he feared Kim was suffering harassment at the hands of her ex-husband.

After insisting that he doesn’t think that is Kanye’s intention, he asked the audience: ‘Do we wish to stand by and watch a car crash when we thought we saw it coming?

‘Or do we at least want to say, “slow down, let’s all put our hazards on, because there’s a storm coming and s**t might go down”.’

Following Trevor’s statement, the multi-award-winning record producer hit back with some offensive choice words regarding the comedian’s commentary.