Arnold Schwarzenegger’s son Joseph Baena, 23, takes after his father as he shows off his chiseled form in a black Speedo

Arnold Schwarzenegger’s son, Joseph Baena, showed that he takes after his father while showing off his chiseled form in a snap and a video that were shared to his Instagram account on Wednesday.

The 23-year-old social media personality was pictured spending time at the pool of his alma mater, Pepperdine University, after finishing off a few laps in the rainy Malibu weather while wearing a black speedo.

The bodybuilder also wrote a brief message in the post’s caption to let his followers know that he was doing well after finishing off his time in the pool. 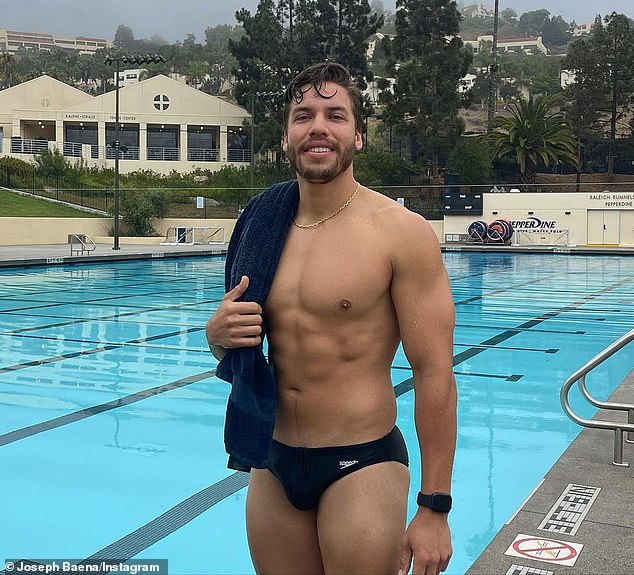 Taking after his dad: Arnold Schwarzenegger’s son showed off his impressively chiseled form in a snap and a video that were shared to his Instagram account on Wednesday

He wrote: ‘Rainy days in LA are surprisingly refreshing. Started the day off with a swim and now heading to my next listing appointment. Hope every has a great hump day!!!’

Baena has notably shared several snaps with his 74-year-old father to his Instagram over the past few years.

Last month, the realtor posted a photo of the two sitting next to each other as they celebrated the actor’s birthday, and the social media figure notably wore a t-shirt with a graphic of his dad portraying Conan The Barbarian.

The bodybuilder wrote that he hoped that his father’s ‘pump was juicy and may your day be filled with lots of schnitzel, schnapps and stogies!!!’ 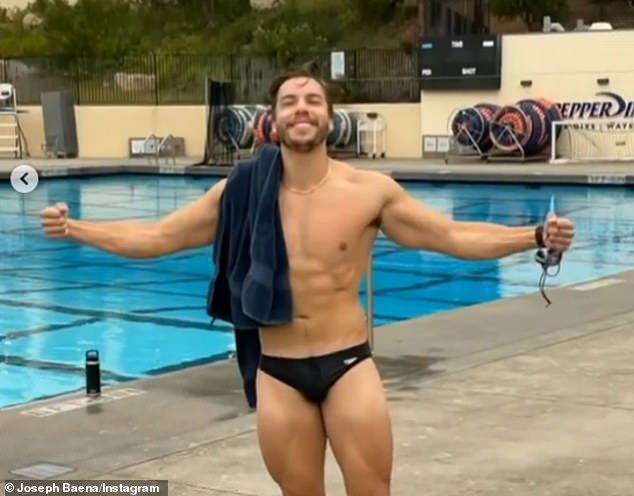 Staying busy: Baena also wrote a short message in the post’s caption where he expressed that he had to head to a listing after his time at the pool 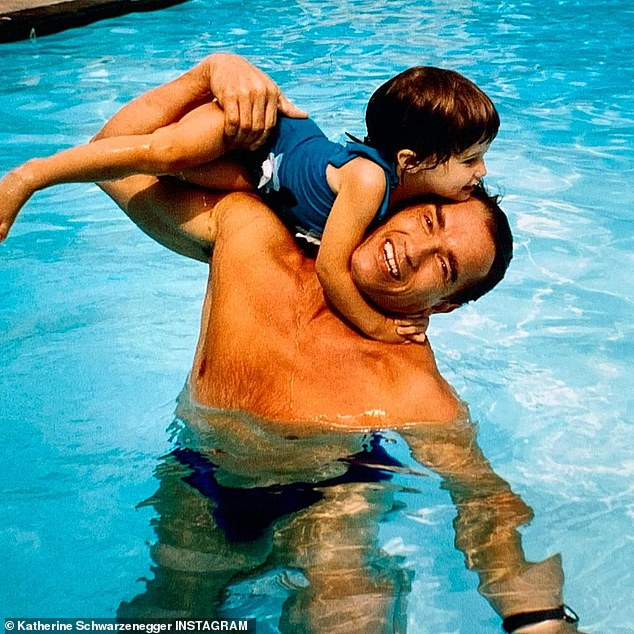 So cute: Arnie at the swimming pool with his daughter Katherine 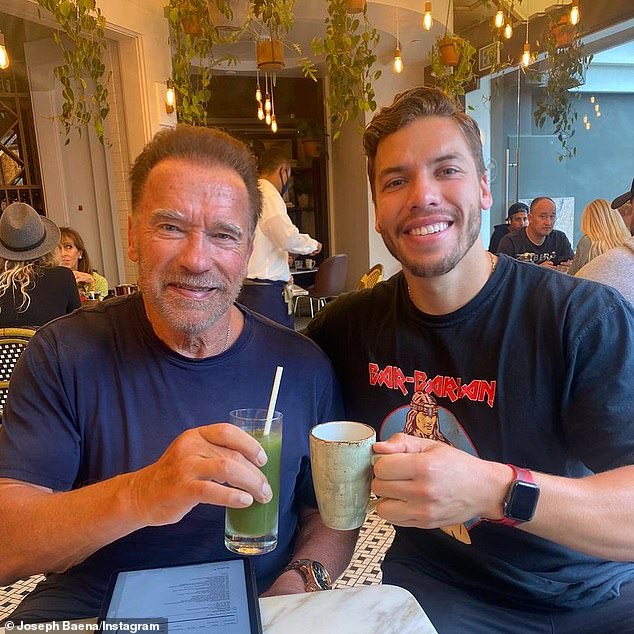 Doting dad: Schwarzenegger has showed up in several shots that have been shared to the realtor’s account over the past few years

This past May, the athlete shared a shot of the two spending time at an outdoor gym.

He notably wrote that there was ‘absolutely NO cheating’ allowed when he was working out with his ‘studly training partner.’

Schwarzenegger shares Joseph with his former housekeeper, Mildred Baena, with whom he previously had an affair.

The Predator star was married to Maria Shriver at the time of the liaison, which occurred several decades ago. 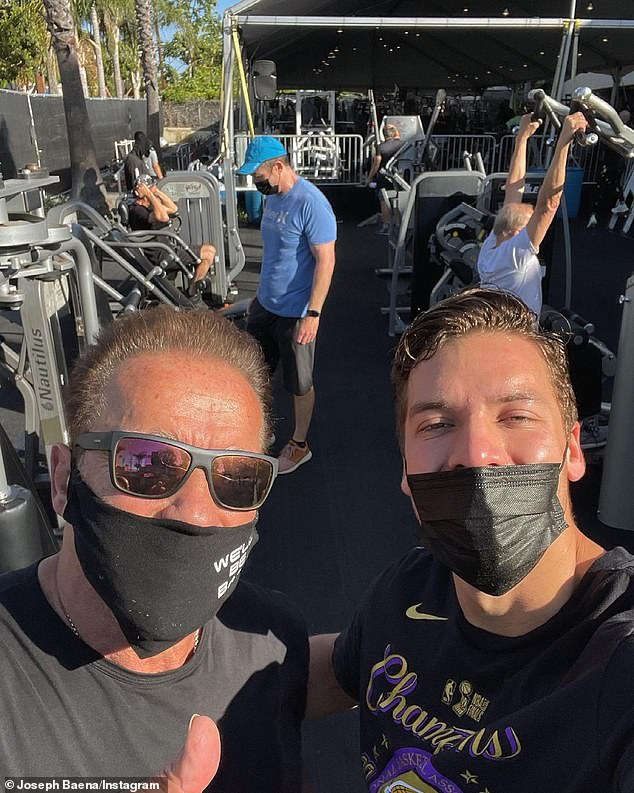 Out of wedlock: The Terminator star shares his son with his former housekeeper, Mildred Baena, with whom he had an affair several decades ago

He notably shares four children with his former wife, including his daughter Katherine and his son Patrick.

The revelation of the affair caused Schwarzenegger and Shriver to separate, and they ultimately dissolved their marriage in 2017.

The bodybuilder also confessed that he had carried on an affair with Brigitte Nielsen during the early stages of his relationship with his past spouse. 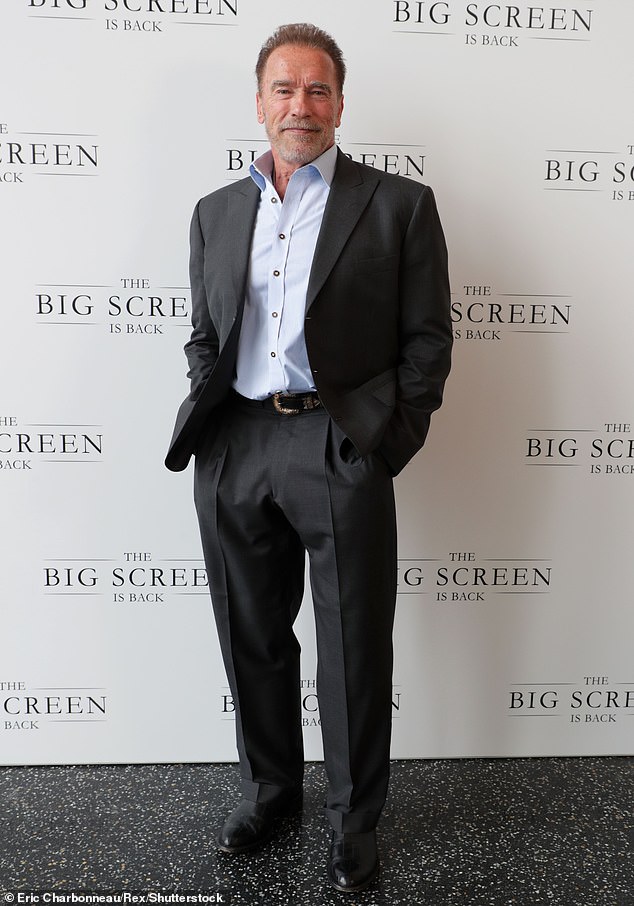 Past relationship: Schwarzenegger was married to Maria Shriver, with whom he shares four children, at the time of the affair; he is seen in May

It was later revealed that Joseph was born just days after the actor’s former wife gave birth to their youngest son, Christopher.

The performer did not immediately recognize Joseph as his son at the time of his birth but later began noticing that his child began to resemble him in his later years.

Schwarzenegger later accepted Baena as his own and provided both him and his mother with financial support.

The two currently share a close relationship and serve as each other’s occasional workout partners. 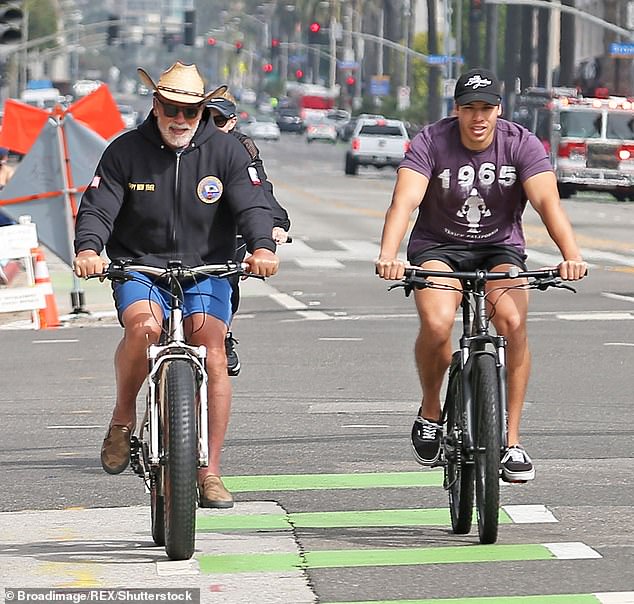 Getting along: The Predator star later accepted Baena as his own son and the two now share a close relationship; they are seen in July