JoJo Siwa isn’t afraid to call someone out—even one of her former Dance Moms costars. She recently posted a TikTok slamming Chloe Lukasiak’s mom, Christi Lukasiak, after Christi made a comment about the show’s assistant coach, Gianna Martello. During a Zoom Q&A, someone asked Christi if she still talks to Gianna, and she replied. “No, Gianna’s not nice.”

JoJo took offense to Christi’s comment and posted her own TikTok in response. “I never like to comment on things or get involved in things that don’t involve me, but this, I just have to say,” she began. “This just came up on my ‘For You’ page and that is absolutely the most disgusting and ignorant thing that I have heard anybody say.”

She continued, “First of all, Gia is one of the sweetest people in the whole world and second of all, she worked so hard every single week for so many people, including Chloe. She had one of the most stressful jobs on the show. She was in charge of choreographing every single number.”

And she didn’t stop there. She went as far as to say that Christi has had her “not nice” moments, but how that isn’t a reason to call someone mean on a public platform. “Now, yes, of course everyone has their moments and everyone isn’t nice 24/7, including you, Christi, but the thing is that you don’t need to say that somebody is not a nice person,” she continued. “I’m sure you’re a very nice person even though the experience that I’ve had with you, you were not nice to me. You actually made a very rude comment to me, but it may have just been a moment.” 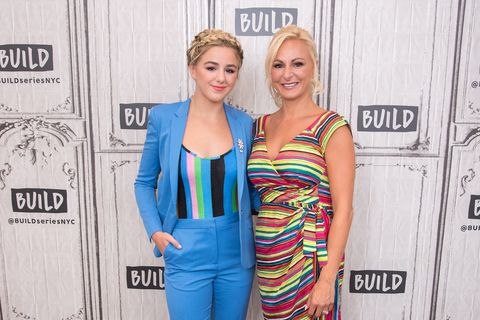 She also posted the video on Instagram where it received more than 3,000 comments including one from Dance Moms coach Abby Lee Miller herself. “And THANK YOU @itsjojosiwa for protecting ppl that you have worked with and care about! Not many young adults do that these days!” she wrote.

JoJo ended the video saying, “You don’t need to say that people are not nice people. I would never say that you’re not a nice person just because our moment you were rude to me. It’s just not what you do.”