‘We’re on the most beautiful island!’ Joe Wicks enjoys a family getaway to The Maldives with his swimsuit-clad wife Rosie – weeks after the birth of their third child

And Joe Wicks and his wife Rosie have been enjoying some well-deserved family time with their new bundle joy after jetting to the Maldives for a picturesque island getaway.

The fitness expert, 36, took to Instagram to share a slew of snaps after arriving on the stunning island of Soneva Fushi, with their baby girl, their daughter Indie, four, and son Marley, two. 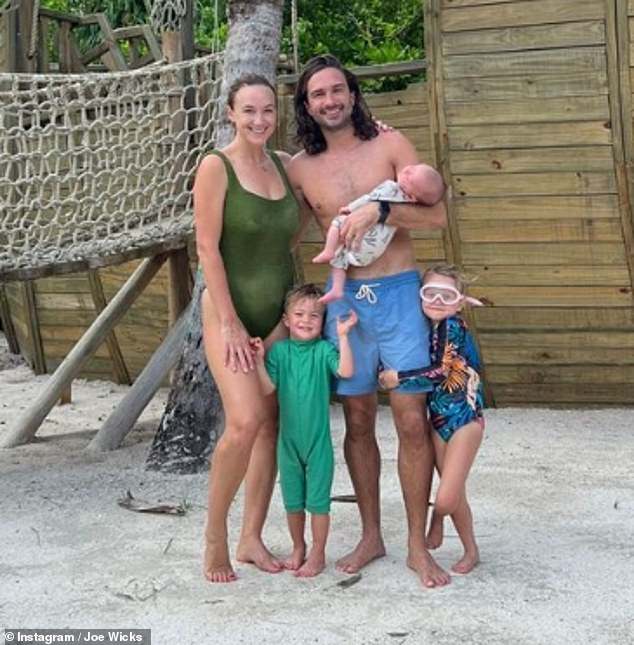 Having fun! Joe Wicks and his wife Rosie have been enjoying some well-deserved family time with their new baby girl after jetting to the Maldives for a picturesque island getaway

Joe shared a sweet snap with his family after they arrived on the stunning island, and revealed he would be putting his exercise skills to good use by hosting a workout class for the guests at the resort.

He penned the caption: ‘We have just arrived at the most beautiful island called #SonevaFushi in the Maldives

‘I’m going to be running a fitness class for the guests here this week and exploring the island with the kids.’ 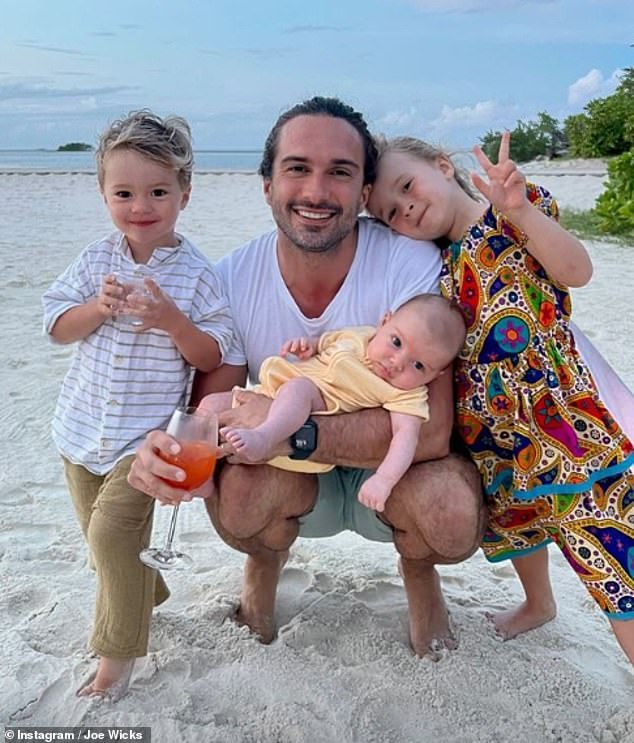 Sweet! The fitness expert took to Instagram to share a slew of snaps after arriving on the island of Soneva Fushi, with their baby girl , their daughter Indie, four, and son Marley, two 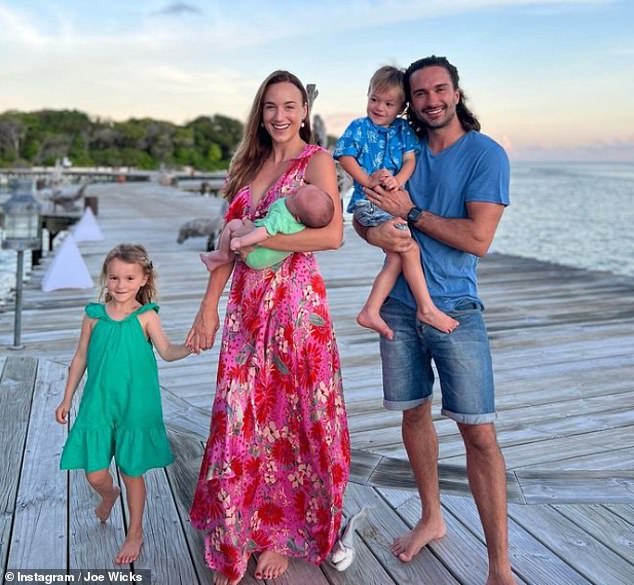 Family time! Weeks after welcomed their third child, daughter Leni, Rose looked radiant as she and Joe arrived in The Maldives for their family break 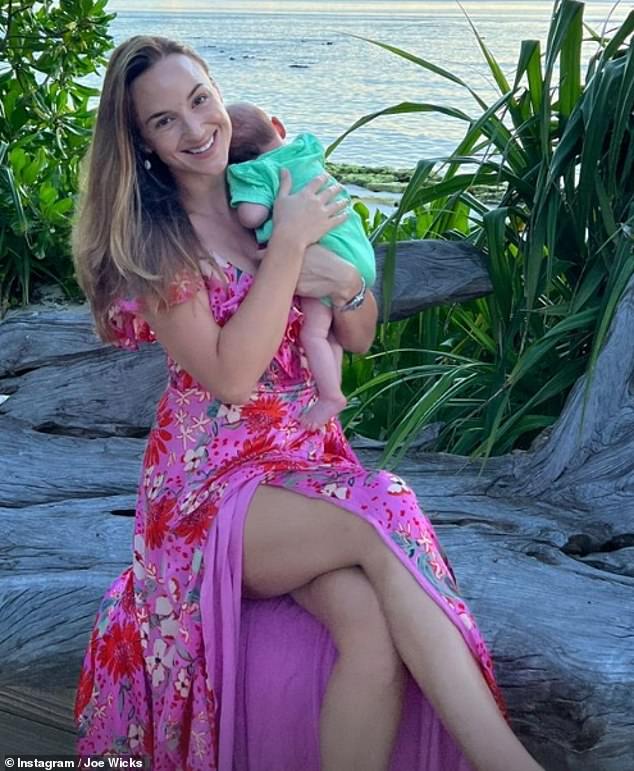 Stunning: One of the snaps showed Rosie cradling her baby daughter, while dressed in a radiant pink floral dress

The Body Coach went onto share a slew of iamge on his Stories, with Rosie donning an olive green swimsuit during a relaxing beach day with her children.

Joe also documented the family’s journey to stay on another island on a sea plane, with his son Marley clearly worn-out by the trip as he fell asleep in his father’s lap.

Last month Joe and Rosie announced that they had welcomed their third child together, a baby girl, taking to Instagram to share a sweep snap of the newborn. 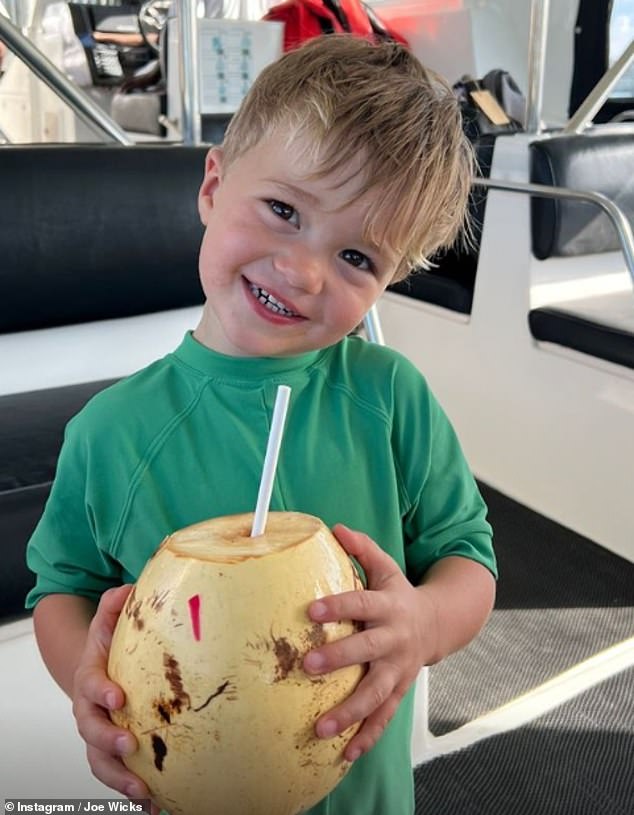 Having fun? The Body Coach posted a slew of images on his Stories from the first days of the holiday, including his son Marley enjoying a coconut 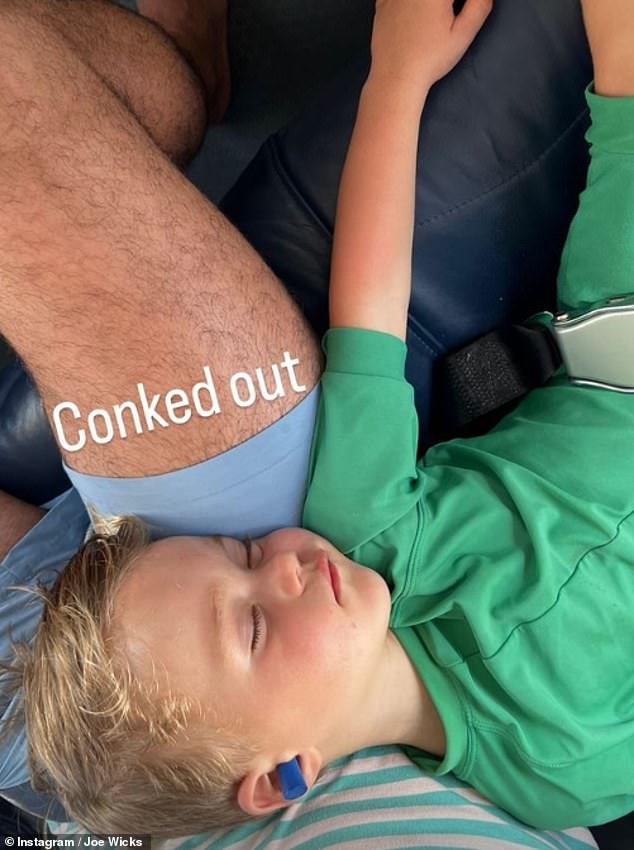 A bit tired? Another image showed little Marley fast asleep in Joe’s lap after being worn out by the sea plane journey to the next island 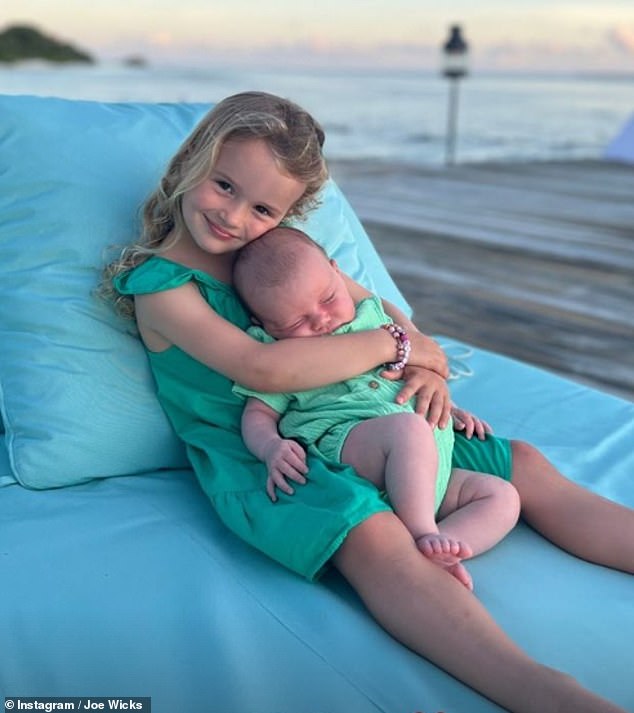 Family time! Among the images was another sweet snap of Indie cradling her new baby sister

Joe penned the caption: ‘It’s a girl! Rosie gave birth at 4.32am this morning at home to an 8lb healthy baby in the birthing pool.

‘Thank you to Emily & Helen our wonderful midwives who where there every step of the way. Time to rest now. Lots of love the Wicks family.’

Joe announced on Wednesday that Rosie had gone into labour as he shared a snap of a home birthing pool, after announcing back in March that they were expecting their third child together. 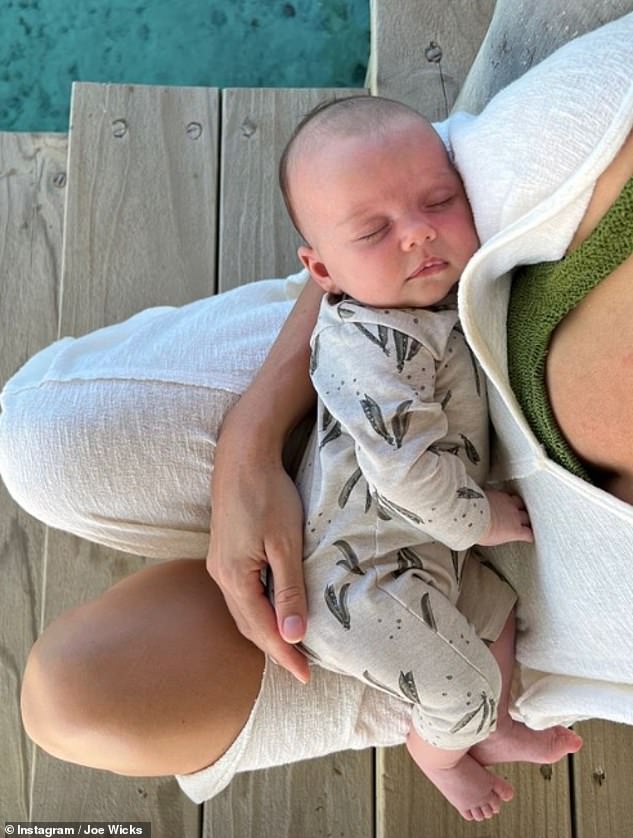 Time away: Joe also shared an adorable image of Rosie cradling their new baby girl, after they announced her arrival on September 8

He excitedly declared: ‘And we’re off! Indie and Marley are asleep upstairs. Could be waking up with a new baby!’

Just a few hours previously, Rosie had shared an image of her heavily pregnant tummy which she had earlier compared to a bowling ball.

Joe remarked: ‘Just amazes me that there is a human being growing in here.

‘With a little brain, heart and lungs. The female body is just an incredible, magnificent creation isn’t it. 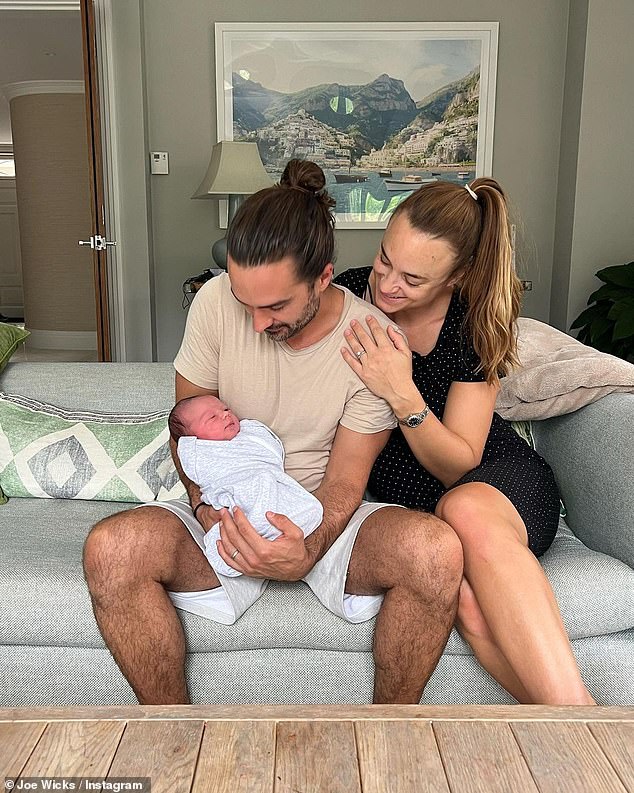 Happy news: Last month Joe announced the arrival of his baby girl, after Rosie gave birth at home with the help of a birthing pool

‘The ability to create new life. What is more beautiful and special than that.’

They couple shared a scan of their baby in March and Joe recently took part in an online Q and A to talk about his third child and told fans: ‘Yeah we can’t wait. Due any day now. Got the home birth pool blown up. Crib is set up. Kids are excited. Here we go.’

Asked if he would be in the delivery room he proudly showed off his home set up for the birth at his £4.4 million home and wrote: ‘If by delivery room you mean living room. 100% I love every single moment.

‘I think it’s fascinating and incredible what the woman’s body is capable of during child birth. I love getting a good view. Probably get in the bath with Rosie if she lets me lol.’ 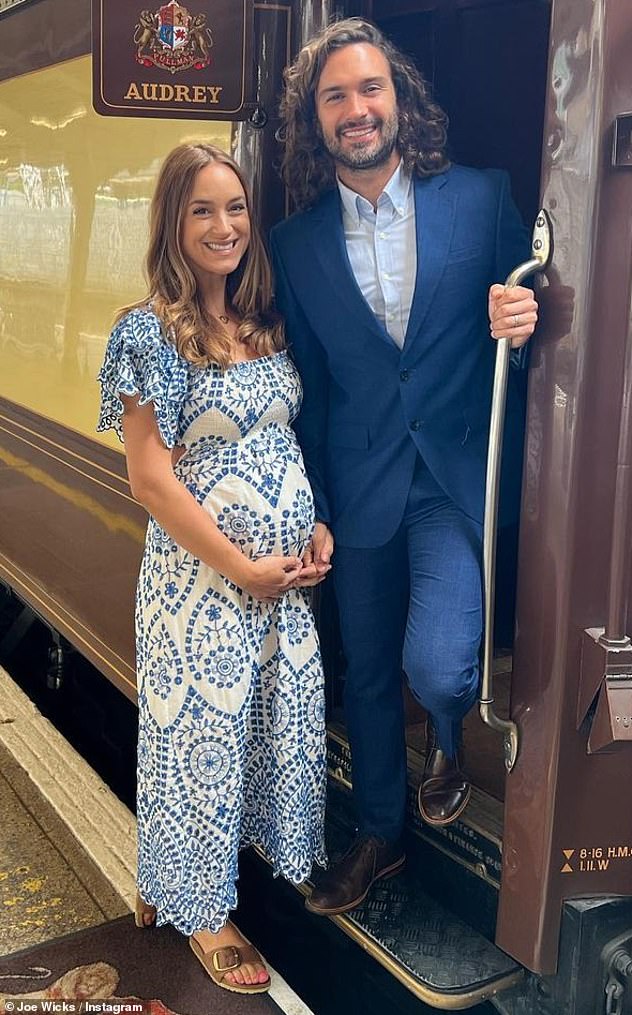 Exciting! Joe announced back in March that Sophie was pregnant with their third child (pictured in August)

Joe has revealed that he and Rosie have already spoken about their desire to have a fourth child and possibly more after they welcome their latest addition.

The fitness star also admitted in a new interview that it would be ‘tough’ to juggle another baby in their busy household.

Speaking to OK! Online, the Body Coach opened up on expanding his family with Rosie and explained that ‘they’d like a fourth and possibly more beyond that’.

With a third child already on the way and the possibility of more in the future, Joe revealed that he’s refused to hire a nanny and instead enlists their mums to help out with childcare.

He said: ‘I’m so lucky as my mum and Rosie’s mum are nearby. I’d find it hard to leave my kids with someone I didn’t know, so the fact I’ve got my mum means I can have a night out in a hotel and I love that.’ 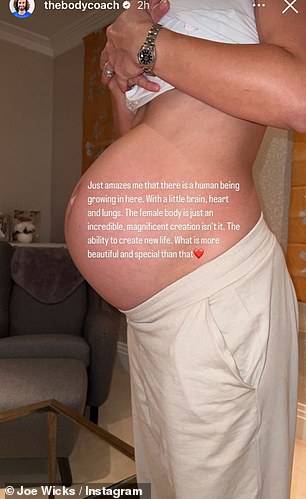 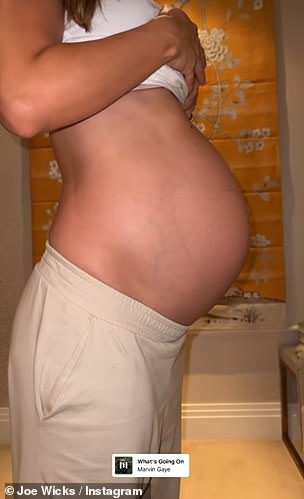 Pregnant: Just a few hours before Leni’s arrival, Rosie had shared an image of her heavily pregnant tummy which she had earlier compared to a bowling ball

On the prospect of having three kids under five in their home, the fitness coach went on: ‘I know it’s going to be tough because obviously we’ve got a four-year-old and a two-year-old and so we’ll have to get more people ready for bed. It’s going to be more of a team-like thing.’

Joe added that he’s ‘definitely’ planning to take more time out of his busy schedule to help out with the children, especially in the ‘mornings and evenings’.

The star went on to heap praise on his spouse of three years, adding that although it’ll be ‘exhausting’ for her with a new baby, ‘she’s very good’.

Joe and Rosie have been together since 2016 and tied the knot in a stunning countryside ceremony in 2019. 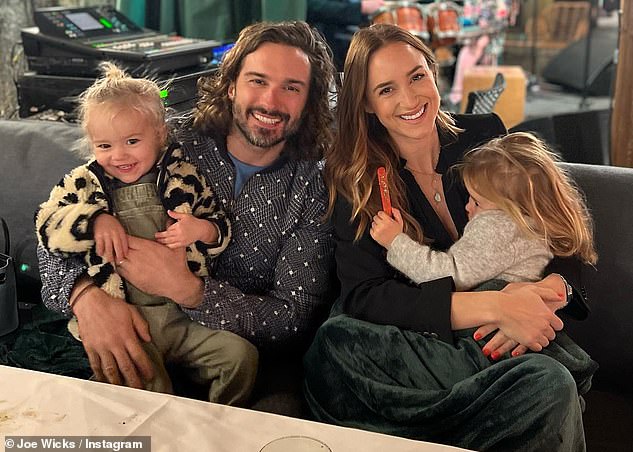 Brood: The happy couple, who married in 2019, are pictured with their daughter Indie and Son Marley earlier this year