‘I drank too much and I stole your moment’: Jimmy Kimmel apologises to Abbott Elementary writer Quinta Brunson for interrupting her Emmy Awards speech with ‘dumb comedy’

Jimmy Kimmel has apologised to Quinta Brunson for interrupting her Emmy Awards speech.

The 54-year-old talk show host was dragged onto the stage jokingly passed out to present the Best Writing in a Comedy Series award with Will Arnett, and stayed lying down while Quinta accepted the award for her series ‘Abbott Elementary.

And on his show, Jimmy joked: ‘Congratulations on your Emmy. I missed it, how did it go?’ 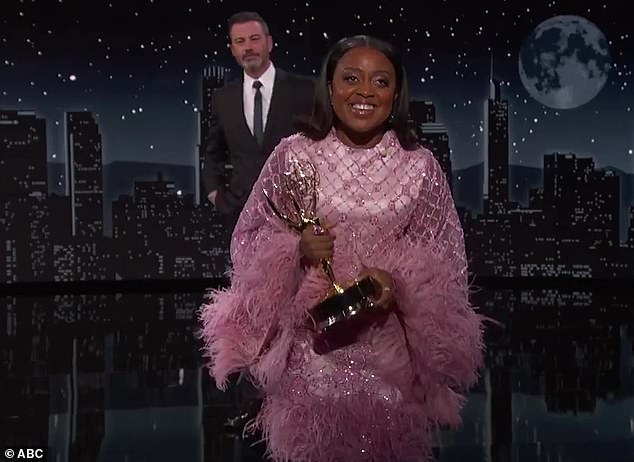 ‘I drank too much and I stole your moment’: Jimmy Kimmel apologised to Abbott Elementary writer Quinta Brunson on his show on Wednesday for interrupting her Emmys speech

But he then said sorry to her for ‘stealing’ her moment and admitted he didn’t expect such a backlash.

He said: ‘That was a dumb comedy bit that we thought would be funny. I lost and then I drank too much and then got dragged out on the stage.

‘And then people got upset and said I stole your moment.

‘Maybe I did and I’m very sorry if I did do that. I’m sorry I did do that actually and also the last thing I would ever want to do is upset you because I think so much of you. I hope you know that.’

The writer, 32, went on to accept Jimmy’s apology and insisted that she was so ‘wrapped up’ in the excitement of winning her first Emmy and ultimately had ‘a good night.’ 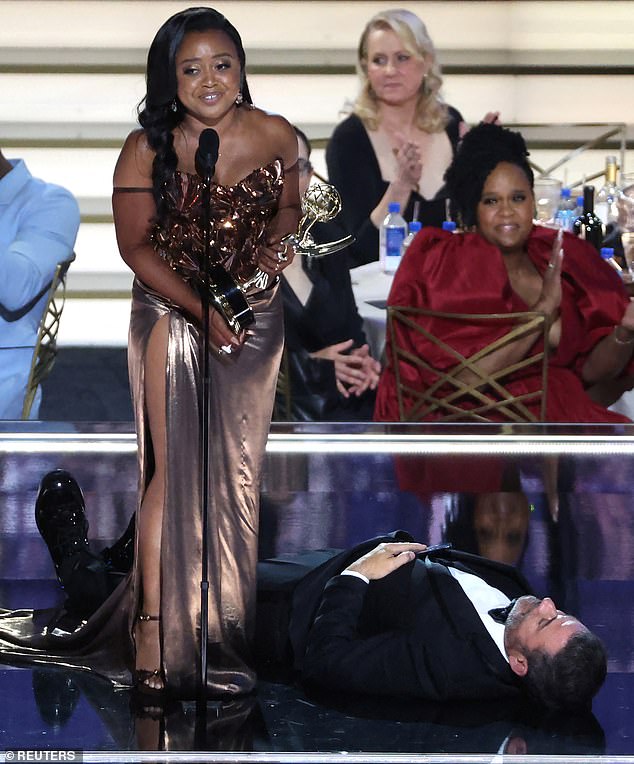 Acceptance speech: Kimmel had distracted attention from Brunson’s Emmy acceptance speech by lying pretend-drunk on stage on Monday during the Primetime Emmy Awards

Speaking on Jimmy Kimmel, Live, she replied: ‘Well, Jimmy, let me just say thank you. It is very kind of you to say that. I honestly was in such a moment of having a good time, Like, I won my first Emmy! I was up there real happy and I was wrapped up in the moment and was having a good time.

‘I didn’t see that. I saw you and I saw Will Arnett and my Emmy and I was like “Oh my God, I’m having so much fun.” Thank you so much, that’s kind but honestly – I had a good night. It was a good night and a good time!’

During the opening monologue of Jimmy’s talk show, Quinta appeared to get her own back by interrupting the start of his show with her Emmy in hand as she recreated her special moment.

When Quinta appeared during the segment, Jimmy said: ‘You’re a little early for your interview.’ 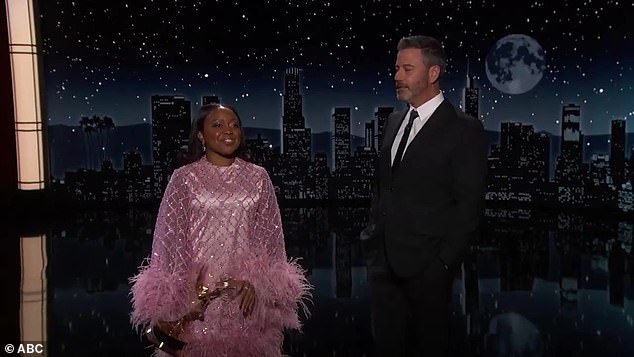 Extra time: Quinta used her stint on Kimmel’s show to have an extended speech, thanking yet more people who had helped her along the way 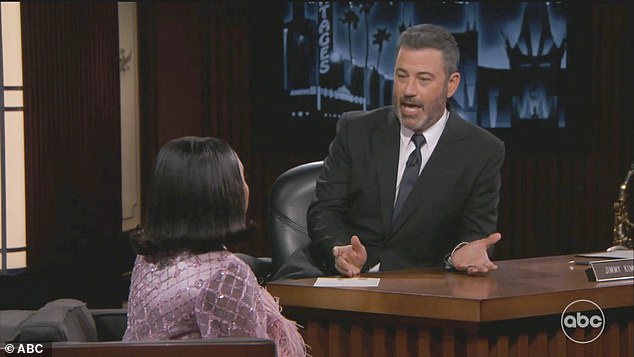 Apologising, Jimmy said: ‘That was a dumb comedy bit that we thought it would be funny,’ he said. ‘Then people got upset, they said I stole your moment. And maybe I did. I´m very sorry’

She said: ‘Oh I know but I have a little favour to ask actually. So you know how when you win an Emmy, you only have 45 seconds to make an acceptance speech? And then you get less time because someone does a dumb comedy bit that goes on a bit too long?

‘Okay, so thank you – again – to the Academy for this amazing honour.

‘I’d also like to thank Randall Einhorn, Michelle Nader, Big Andy, Margie, Aaron Warrenberg and Channing Dungy, Persona PR, all of the fans of the show. And the Internet for raising me!’

During her Emmys win, Kimmel had given Brunson a thumbs-up for her award but didn’t budge, a decision that was blasted online as thoughtless by some and cited as an example of white-male arrogance by others. 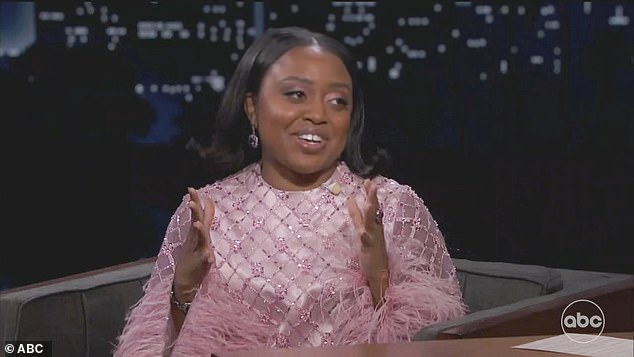 Kind words: Quinta said: ‘Honestly, I had a great night. It was a good night and a good time’ 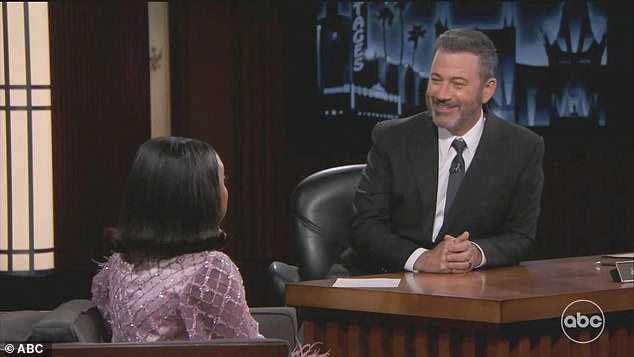 Abbott Elementary, a mockumentary set in an underfunded Philadelphia school, earned a total of three Emmy Awards for its freshman season, including one for co-star Sheryl Lee Ralph, 65, for best comedy supporting actress.

On Kimmel’s show, Brunson received loud applause from the studio audience when she thanked ‘all of the fans of the show,’ then joined the host for a chat.

Earlier Wednesday, Brunson and her cast mates fielded questions from TV critics during a virtual panel discussion, with Ralph expressing her displeasure with Kimmel’s Emmy act. 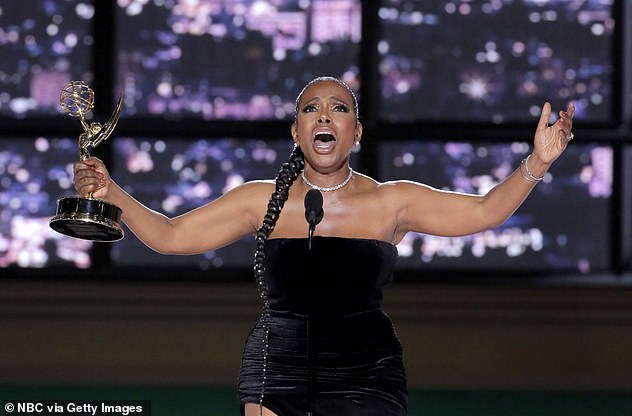 Supporting actress: Abbott Elementary, a mockumentary set in an underfunded Philadelphia school, earned a total of three Emmy Awards for its freshman season, including one for co-star Sheryl Lee Ralph, 65, for best comedy supporting actress

‘I was like, ‘Oh, the disrespect, Jimmy,” Ralph recalled.

She sarcastically referred to it as ‘lovely that he was lying on the floor during her wonderful acceptance speech. ‘I told him too, to his face, and he understood,’ said Ralph.

When Brunson was asked what she expected during her appearance with Kimmel, she said she was ‘anticipating that we are going to have a good old-fashioned time’ and that she was intent on highlighting the season-two return of ‘Abbott Elementary’ on September 21.

Brunson said that she and Kimmel had already spoken about the awards moment, but didn’t detail their private conversation.

Backstage at the Emmys on Monday, Brunson said the bit didn’t bother her ‘that much’ and noted that Kimmel has been a highly public booster of her and Abbott Elementary.

If she decides she’s mad at him, a smiling Brunson added, she might ‘punch him in the face’ during her appearance on his show. 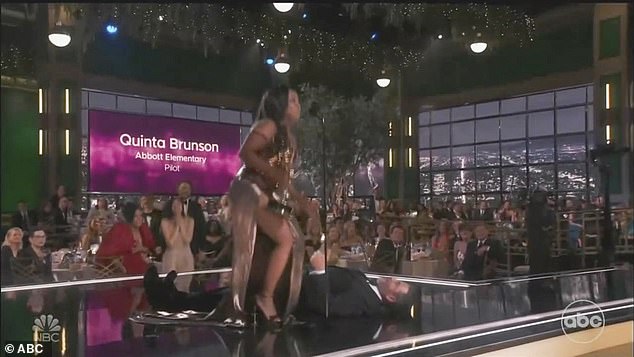 Public booster: Backstage at the Emmys on Monday, Brunson said the bit didn’t bother her ‘that much’ and noted that Kimmel has been a highly public booster of her and Abbott Elementary