Jimmy Carr, 48, looks dramatically different as he sports fuller, lighter locks and shows off weight loss after getting hair transplant and teeth fixed

Jimmy Carr displayed his dramatically different new look recently, when he stepped out for a casual stroll with fellow comedian Russell Howard.

The comic, 48, has undergone a huge transformation in recent months, thanks to losing weight, getting a hair transplant and giving his teeth a gleaming makeover.

And as he strolled through the streets of north London’s Primrose Hill, the star was seen sporting rusty red locks, a change from his signature raven tresses. 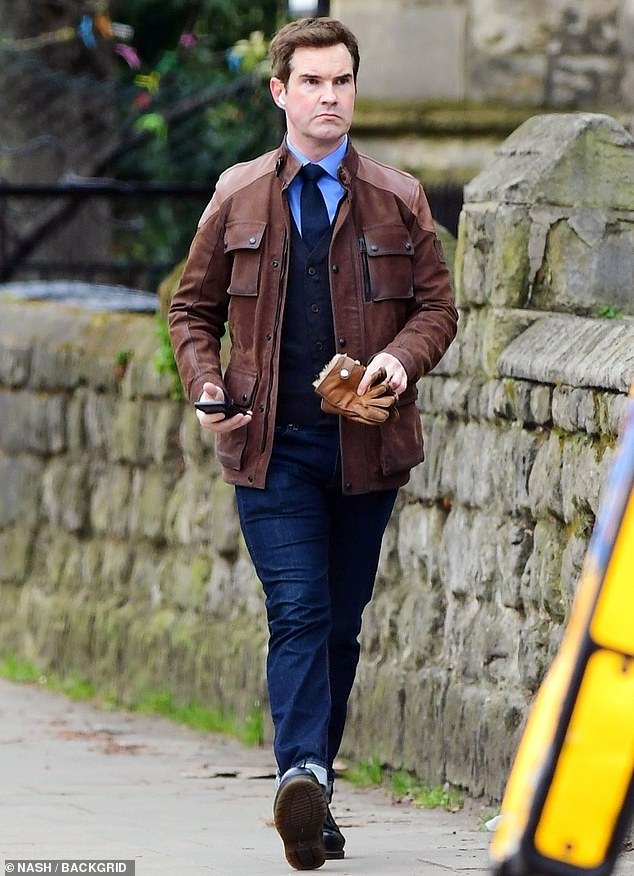 New look: Jimmy Carr displayed his dramatically different new look recently, when he stepped out for a casual stroll through the streets of north London

The star stepped out in dapper style, wearing a brown leather jacket, which he teamed with a blue shirt and black tie.

Complementing his look with cuffed indigo jeans and a black cardigan, the TV personality rounded out his look with a pair black steel-capped shoes.

Carrying a pair of brown gloves in one hand, the star was later seen chatting away on his phone, with the aid of AirPods. 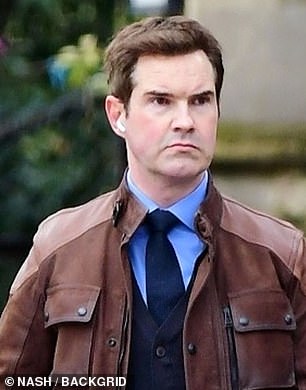 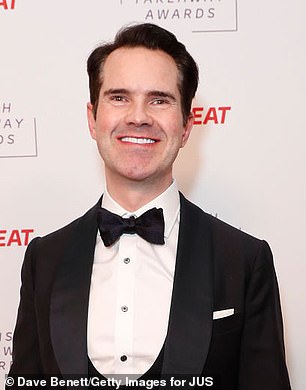 Wow: Jimmy has undergone a huge transformation recently, thanks to losing weight, getting a hair transplant and giving his teeth a gleaming makeover. Pictured right in January 2000

Adding a sporty touch with a pair of white tennis shoes, the star sported a light grey cap and black-rimmed spectacles as he walked his beloved pooch.

Last month, Jimmy revealed he has had his teeth fixed in a mammoth three day appointment at the dentist and has also undergone a hair transplant.

Talking on Gabby Logan’s Midpoint podcast, Jimmy said he decided to make some tweaks to his appearance after feeling disappointed that he doesn’t look as good in real life as he does on television.

He said: ‘I got my teeth done, that’s the first thing I had done, they’re more than veneers. I got every tooth in my head done in one sitting.

‘I did 12 hours in the chair the first day, then 12 hours the second, it was like a three day thing where you’ve got temporary things on, it’s pretty full on. 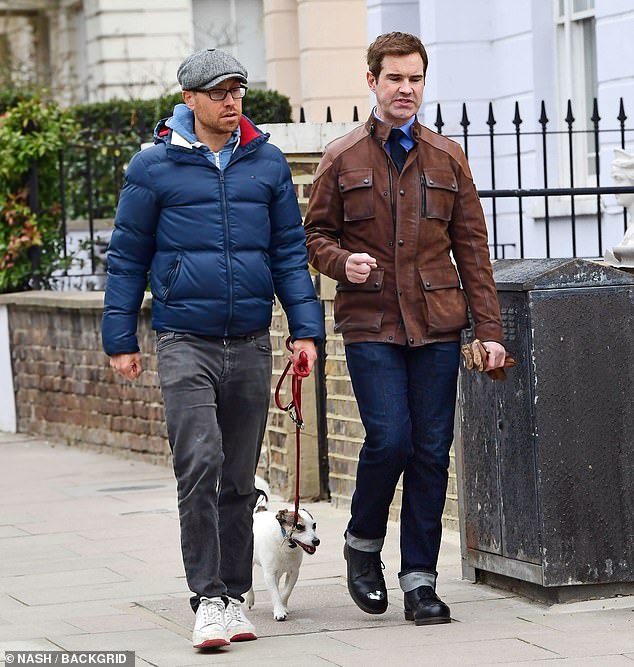 Comedians united: He was accompanied by fellow comedian Russell Howard as they walked through north London’s Primrose Hill

‘I think they gave me Rohypnol intravenously into the vein and you’re kind of out of it and they do everything and you’re fine. It’s a dream-like haze, you’re in a weird space.’

Jimmy said he wants to maintain his looks rather than change them too much.

He said: ‘I think that thing of age is that people don’t really see what’s there, people are good at pattern recognition, that’s all they do, teeth and hair.

‘Maintaining is the thing, I don’t think there’s anything you can do plastic surgery wise, or augmentation wise, that makes you look better, you can just sort it stay the same, that’s what you can hope for.’

Jimmy joked that he was considering transplanting pubic hair to his head when it came to his hair transplant. 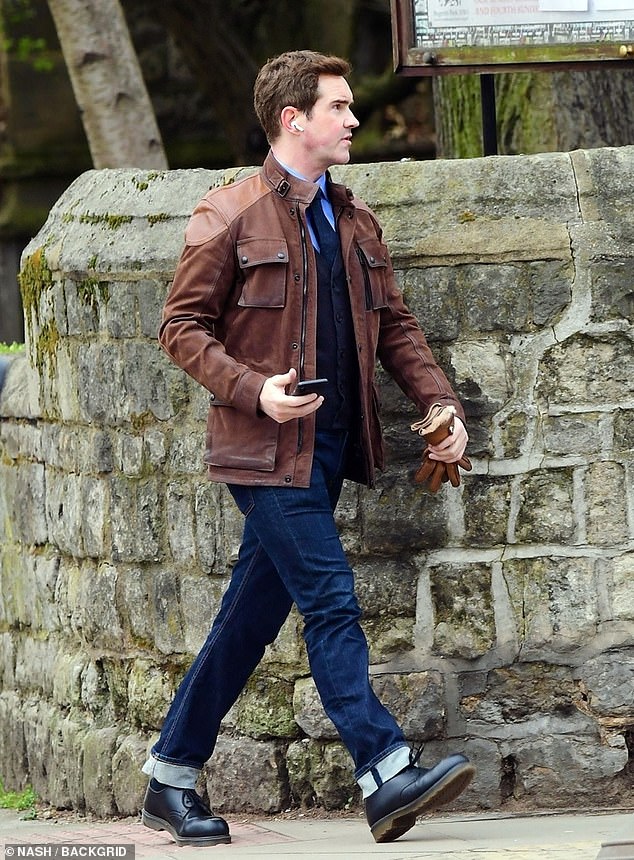 Dapper: The star stepped out in dapper style, wearing a brown leather jacket, which he teamed with a blue shirt and black tie. He also sported indigo jeans and steel toe cap shoes

He said: ‘The hair thing, I really researched it, I came up with Edward Ball at the Maitland Clinic down in Portsmouth. I went to all the places in Harley Street.

‘You go in there, front of office is immaculate and the most charming guy is selling it, the guy who is selling it has got good hair.

‘Then you meet the doctor who is doing it is a GP from somewhere who wants to make a few quid and goes, “I’ll do it.” No, you need a plastic surgeon who is qualified to do it. The guy I used is a plastic surgeon and has an aesthetic thing.

‘They get it from the back of the head. You shave your head fully, which I loved, I kind of suited a shaved head, which surprised me.’

Gabby told him: ‘Your hair’s gone a bit chestnutty?’ 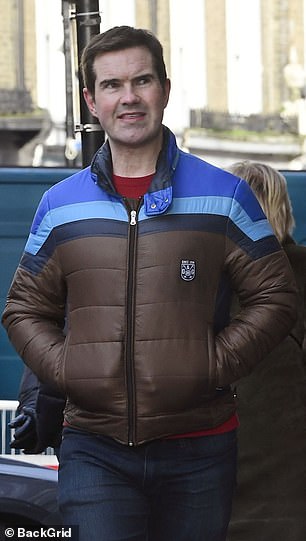 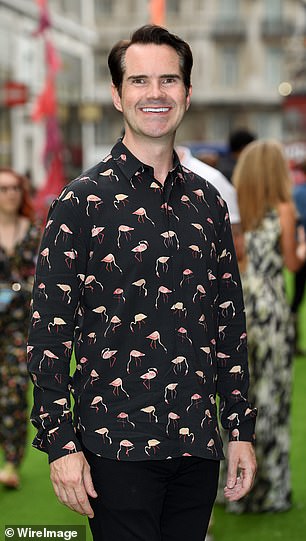 Meet the new Jimmy! Last month, Jimmy revealed he had his teeth fixed in a three-day dentist appointment and has undergone a hair transplant (pictured left in December; right in 2018)

Jimmy replied: ‘It’s got a bit of something. I could do with dyeing it I suppose. I wasn’t receding. I’ve had the same hairline since I was 17, I had a big widow’s peak. I looked like a vampire’s accountant. It was just post lockdown I got it done.’

The TV personality said as well as these physical changes, he’s also been exercising lots and taking lots of pills.

He said: ‘The cosmetic stuff is sort of nonsense, it’s the feeling better. And there’s the exercise I do and the pills I take – I take a lot of pills as part of a health overhaul.

‘What I imagine in my head matches what I see in the mirror. It’s the illusion of being on TV – you see yourself in full make up looking your best and lit well, then you look in the mirror and go, “Oof, that’s disappointing”.’

‘I took a thing like a protein pill. I got the hair transplant and they said ,”You should take something to make you hair grow”.’ 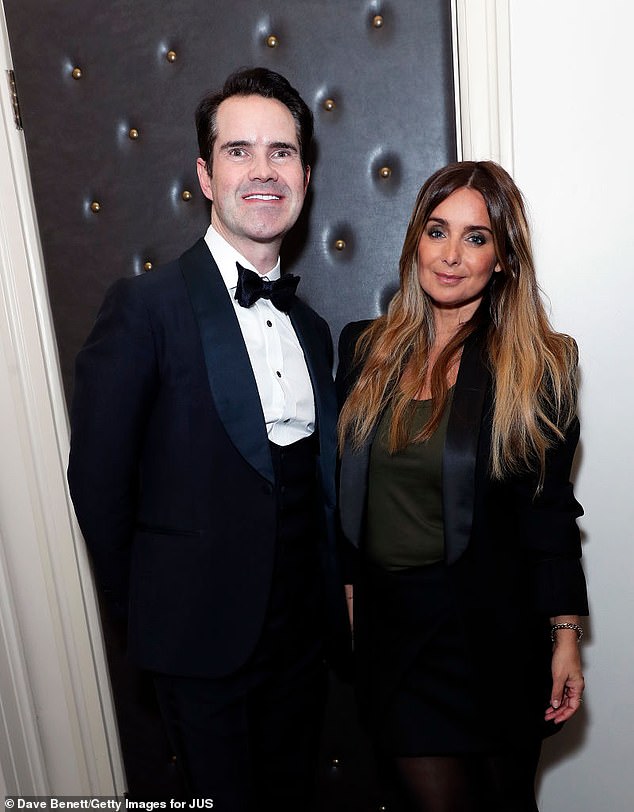 Doing his thing: Jimmy, pictured with Louise Redknapp in January 2020 before he had his work done, said he had ‘more than veneers. I got every tooth in my head done in one sitting’

‘I took this thing called Help Hair – that did – my hair and nails, I was like a lizard, I could have skitted up the wall.’

Gabby said: ‘Apparently your pubes keep growing until you die, that doesn’t seem fair. Presumably you could transplant that.’

Jimmy said: ‘I went into the hair transplant clinic and said, “I want to look like an Armenian cab driver – the eyebrows and then the hair to start, like a beautiful, thick, hair. It’s a great look”.’

Talking about his career, Jimmy said: ‘My theory on comedy is all comics have a sick parent. They have a parent who is either mentally or physically sick and they needed to make things OK, and I think the drive to make the mood lighter leads to comedy.

‘I was the one who was trying to make it alright, “Hey, what’re we doing?”‘

Jimmy also spoke about ‘cancel culture’ and is convinced that if there is a joke that will end his career, he’s probably already said it. 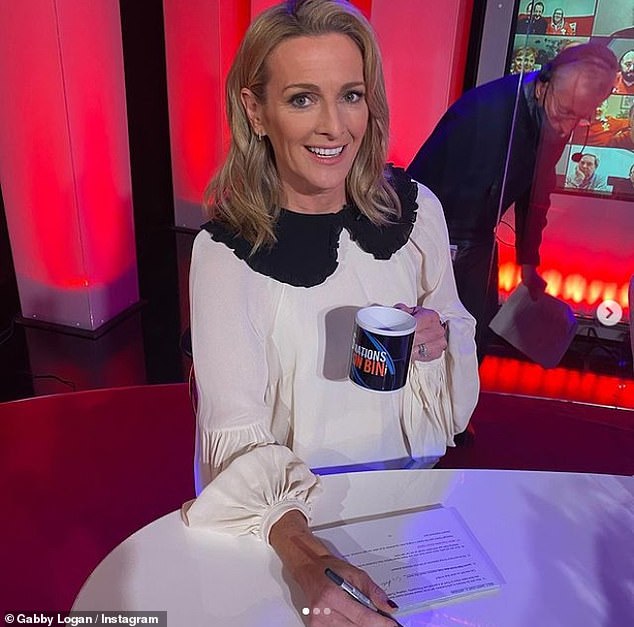 Spilling the beans: He was interviewed by Gabby Logan on her Midpoint podcast on Wednesday, when he made the admission

He said: ‘It’s weird now, I think the joke I get cancelled over, that ends my career, it’s already out there – it’s out there on a DVD or on YouTube and at some point that joke will come to light and I’ll be cancelled. Ok, but it was alright at the time.

‘It feels like it’s people power, that people can do things, that’s the good side. But there’s no road back, there’s no redemption.

‘…It’s interesting where, you know that phrase, ‘We can’t forgive what we cannot punish’. 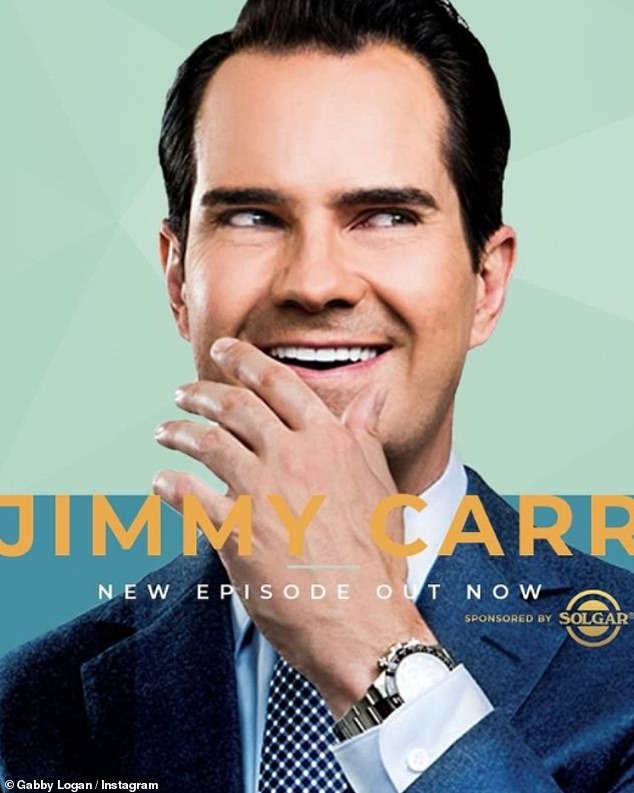 Listen up: Gabby shared this promo image on social media when she released the podcast

‘But with some things it’s very difficult to see what the punishment is.’

Gabby pressed further and asked: ‘You made jokes about rape, disability – do those things still stand?’

Jimmy replied: ‘On a podcast I’m very aware, it’s broadcasting. Context is everything.

‘There’s a big difference between telling jokes to adults, so it’s 10 o’clock in the evening, you’re in a theatre, you’ve been on stage for an hour, and you tell a joke and it’s about releasing tension – taking things and talking about things in society.

‘Saying a subject is off-limits, saying it’s too serious to joke about, it’s like saying that disease is too terrible to cure. The laughter is how we process, it’s how we deal with those very dark things.

‘What you find funny is very personal to you. I think people have the right to be offended – once.

‘They can come and see my show and go, “I’m not going to go see that again”, fine. But if you come back, well… it’s the faux offence. That idea of being offended on behalf of someone else: “I’m not offended, but people have said…”

‘There’s public and private discourse and it strikes me they’ve never been further away. When you see people on the BBC News, obeying the rules, then the reality of the real world – it’s miles apart.

‘The frustration and anger that’s out there and the depression – it’s not really being talked about publicly, and comedy is often the way you take that bitter pill and you take it.

He continued: ‘It’s very transgressive to talk about things in society. When people say, “You can’t joke about rape or joke about disability” – people say rape is never funny, they’re 100 per cent right. 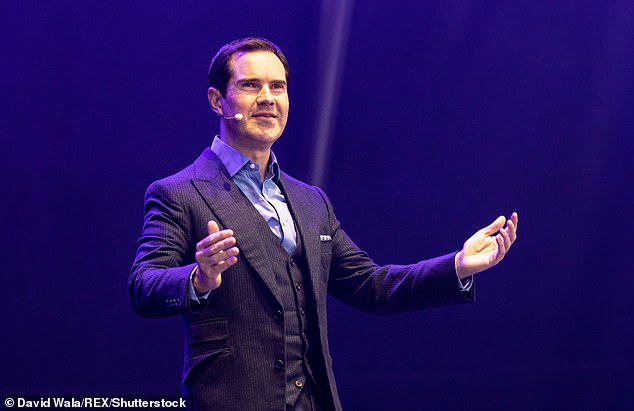 Honest: Jimmy also spoke about ‘cancel culture’ and is convinced that if there is a joke that will end his career, he’s probably already said it (pictured in August 2020)

‘But a joke about a rape can be funny, because, you know, it’s not the thing – just because you’re talking about the thing.’

Jimmy said he feels wiser as he gets older and is enjoying the ageing process – although maybe not physically.

He said: ‘Yeah, I like being older. I like the age I am, I’m looking forward to 50s. It was like I didn’t make any sense when I was 20 and I make more sense in my 40s. I like being a little bit older. It’s nice. I don’t think it’s anything to be scared of. It’s lovely.’

Gabby said: ‘You’ve found your thing (in fashion.)’ and referenced a penis enlargement.

Jimmy joked: ‘Jimmy: “Thanks – it’s small but I found it, thanks for the vote of confidence. I’ll get that done next.’ 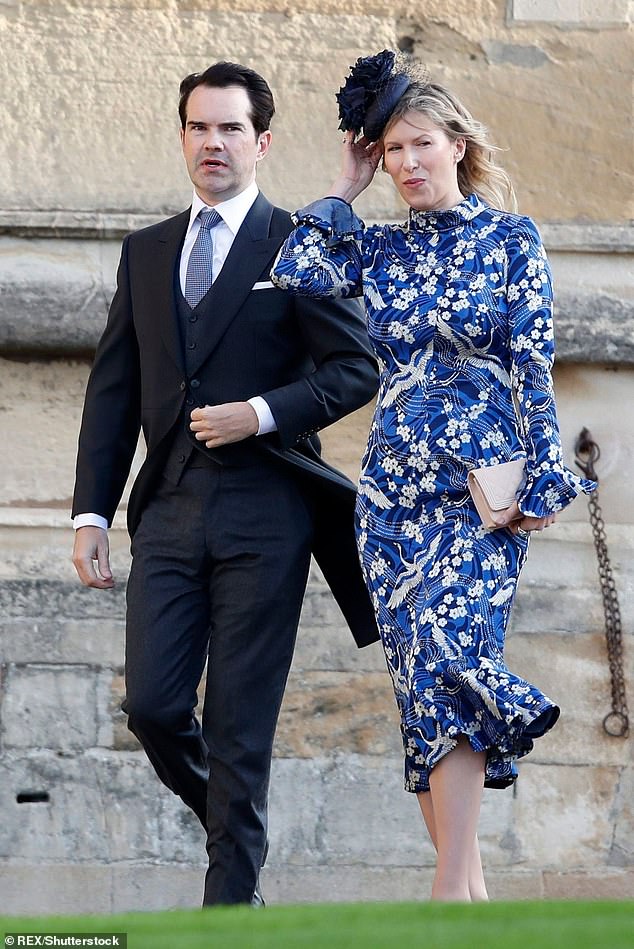 Partner: The star is pictured with his Canadian-born partner of 20 years, Karoline Copping, at the wedding of Princess Eugenie and Jack Brooksbank in 2018