Jennifer Lopez is having a family-filled weekend in Miami with fiance Alex Rodriguez and two of their children.

The 51-year-old megastar looked effortlessly chic in a black strapless romper as she and some of their blended brood stepped out for lunch at Greenstreet on Saturday.

A doting matriarch, she was seen holding hands with Alex’s daughter Natasha, 16, and her daughter Emme, 12, as Alex followed behind. 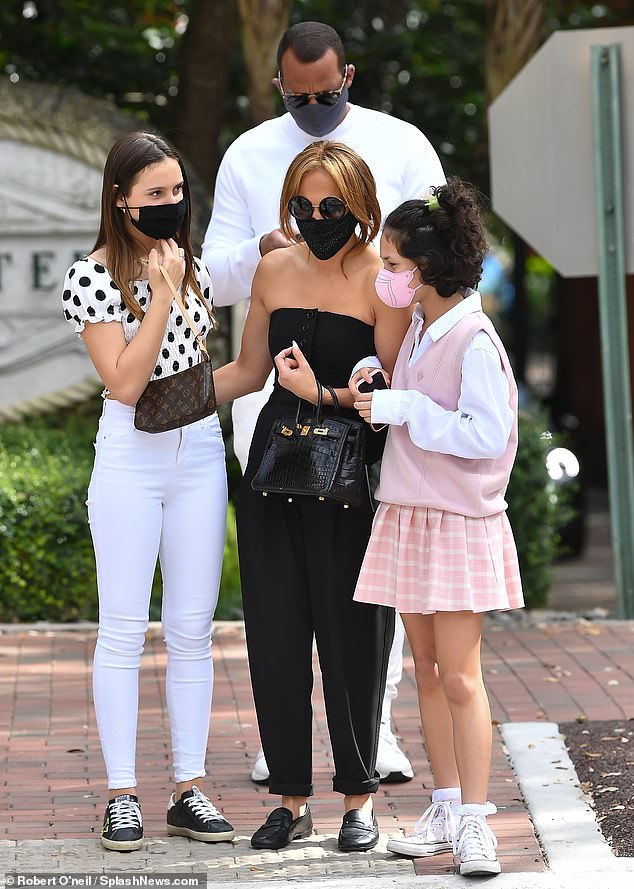 Family outing: Jennifer Lopez, 51, looks chic in a black strapless romper as she heads to lunch in Miami with fiance Alex Rodriguez and two of their kids

For the outing Lopez paired the black jumper with a simple pair of black Chanel loafers and a crocodile Birkin bag with gold hardware.

She kept her carmel locks clipped back in a loose bun, sporting face framing layers and a pair of oversized sunglasses.

Lopez was seen with her arm wrapped around Natasha who looked put together in white jeans and a frilly polka dot crop top as she carried a Louis Vuitton bag.

She flashed her massive diamond ring as she linked arms with daughter Emme who looked preppy in a pink and white plaid skirt and a white blouse with a pink sweater vest. 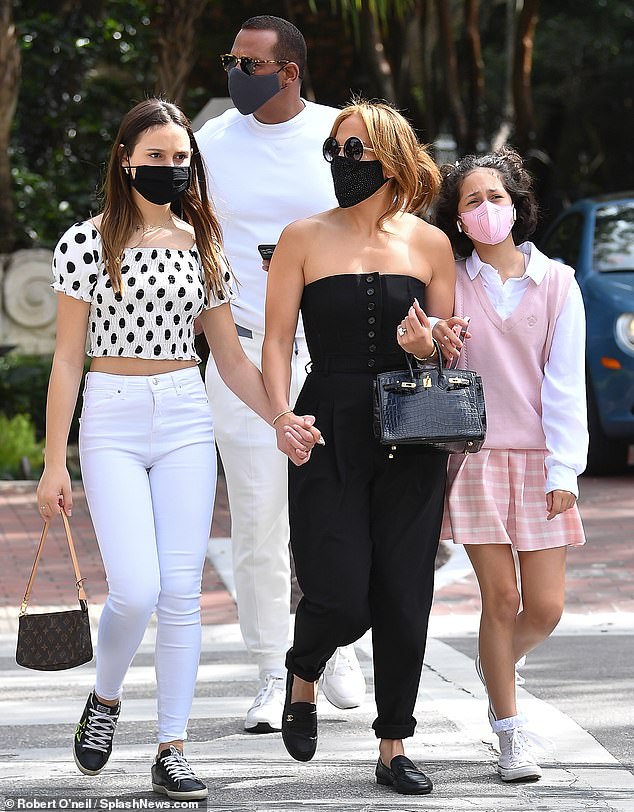 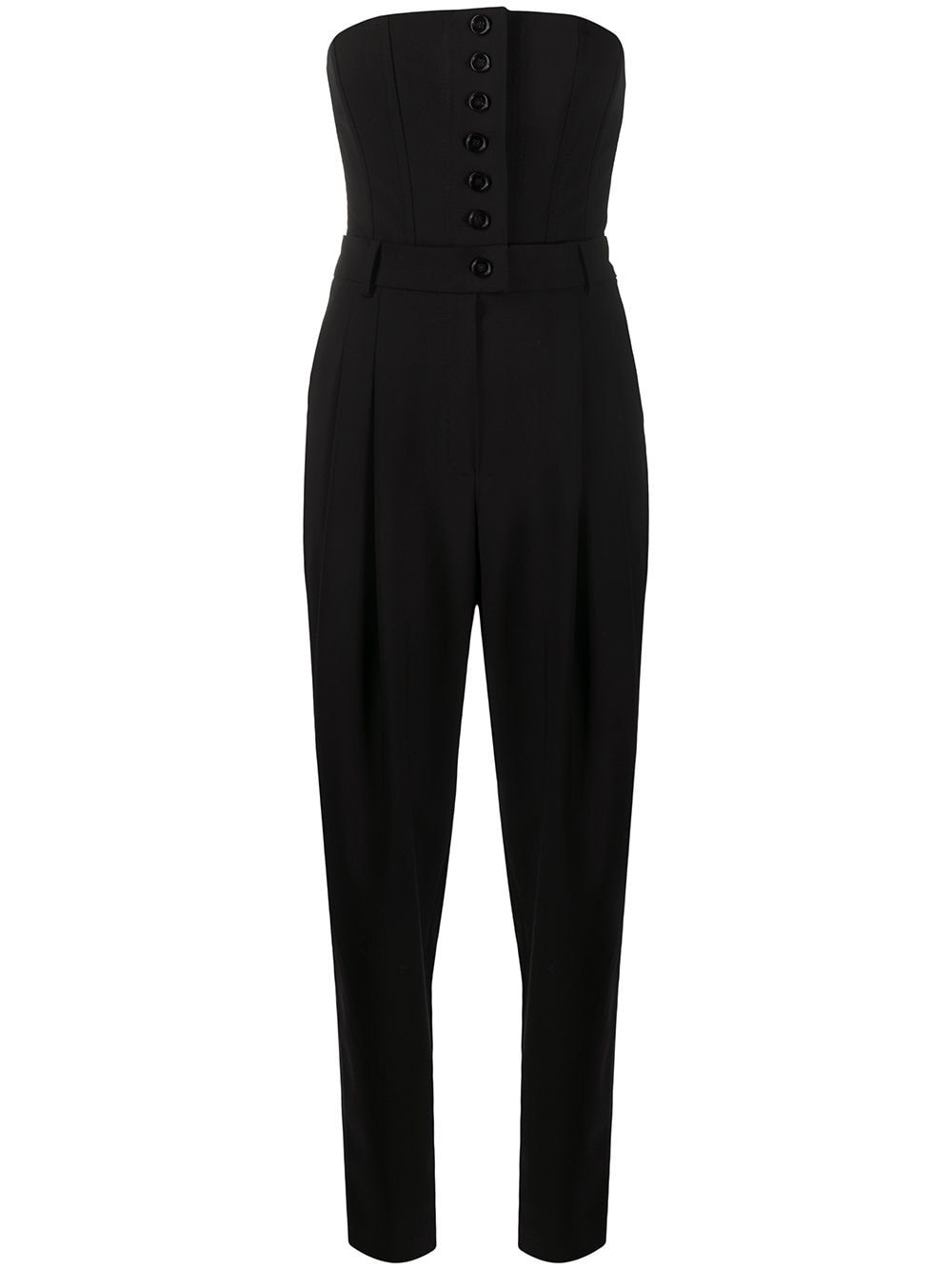 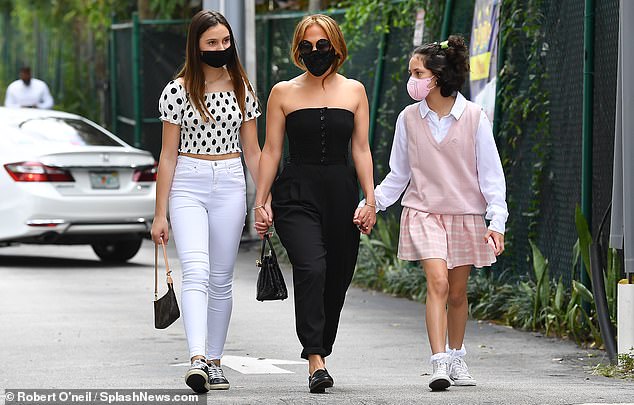 Ladies who lunch: The megastar held both ladies close as they enjoyed a weekend with the family 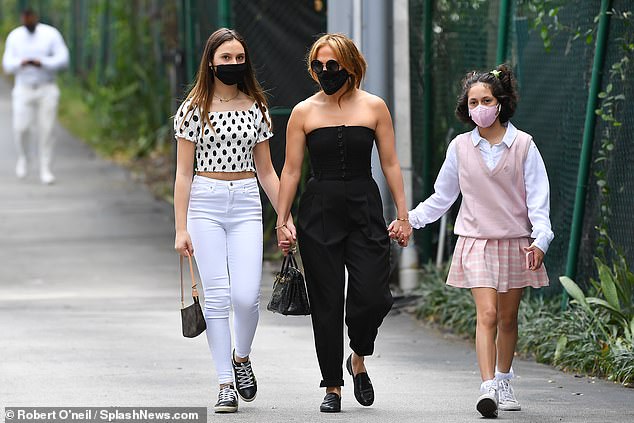 Unwinding: Lopez has had a busy few weeks as she spent time in DC after performing a the inauguration of President Joe Biden and had a photoshoot in Los Angeles earlier this week

The family were all suited up in face masks as they spent a day enjoying the warmer temperatures in the Coconut Grove area.

Rodriguez seemed to be tending to some business as he strolled far behind the ladies in an all white ensemble.

He is currently dealing with a lawsuit after his ex-wife Cynthia Curtis’ brother Constantine Scurtis, sued him for $50M, after claiming he was owed money in backpay from a real estate partnership they formed back in 2003.

The duo created a $1B property empire after buying up a host of apartment buildings and subsequently establishing 46 LLCs, with Rodriguez allegedly removing Scurtis’ name from some of the companies and barring him from receiving profits after the divorce in 2008.

Rodriguez countersued alleging that Scurtis took over a million dollars out of the partnership without authorization, but a Miami judge recently ruled that ‘punitive damages can be added to the complaint,’ meaning A-Rod may end up having to provide financial compensation. 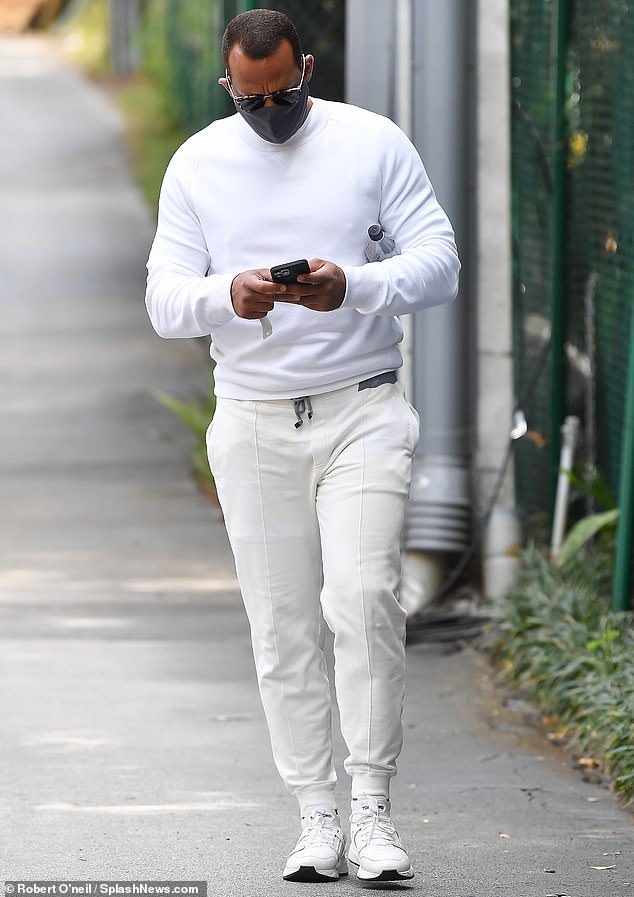 Winter whites: ARod seemed keen to let his ladies have some girl talk as he tended to some business on his phone in an all white ensemble 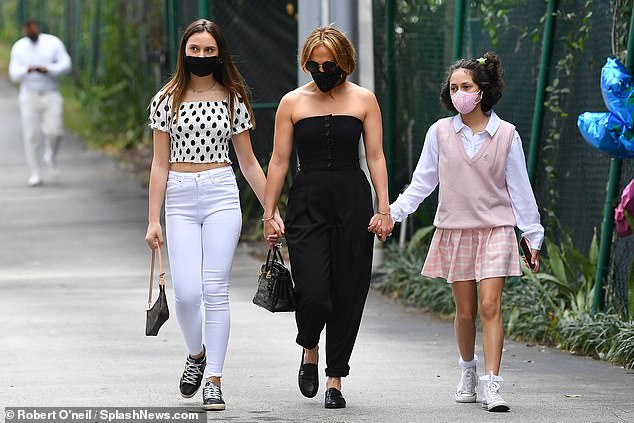 Blended brood: JLo and ARod brought one daughter each out for lunch, as her son Max, 12, and his daughter Ella, 12, were not present for  the outing

The other child he shares with Scurtis, Ella 12, was not not present for the outing in addition to Lopez’s son Max, 12, who she also shares with ex Marc Anthony.

Recently back from a work trip after attending a photoshoot in Los Angeles on Friday, JLo looked at ease to reconnect after a busy work week.

A bustling month for the JLo Beauty founder, she and Rodriguez were in Washington DC as she performed at the inauguration of President Joe Biden and Vice President Kamala Harris on January 20.

The former baseball player gushed over her performance as he wrote, ‘I can’t express how proud I am of her and how privileged I felt just to be in attendance,’ while sharing a photo on their private jet. 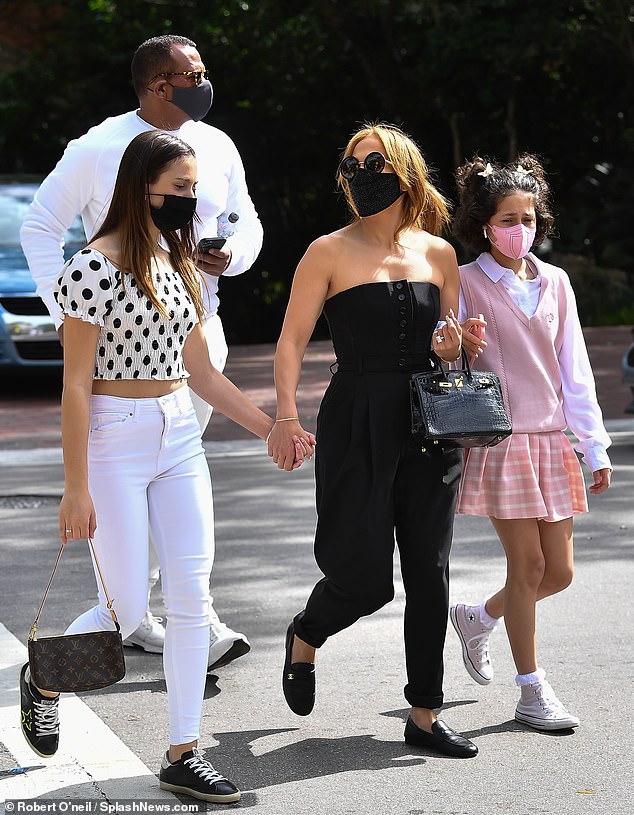 Wedding bells?: The power couple of three years had to postpone their wedding twice with Lopez telling Cohen in an radio interview ‘At our age, we’ve both been married before, it’s like, do we get married? Do we not?’

The pair of three years had to postpone their wedding in Italy on account of the Coronavirus pandemic with Lopez telling Andy Cohen on a Radio Andy interview in late December that it made the two reconsider the future.

‘At our age, we’ve both been married before, it’s like, do we get married? Do we not?,’ she told Cohen adding that ‘there’s definitely no rush though.’

She echoed the sentiments in an Elle interview in mid-January as she spoke about the disappointment of calling off a wedding twice.

‘We had planned what we really, really wanted to do, [but] I don’t know if we’ll be able to re-create that…We want to do it right when we can do it,’ she said.

Despite the semantics of a legal union the pair are undoubtedly committed to each other, as Rodriguez shared a family photo on Friday of he and his girls jumping on a trampoline. 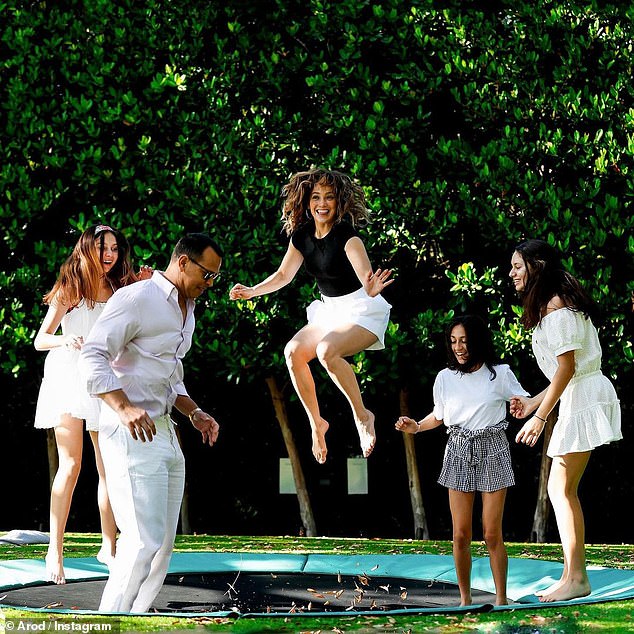 Family first: Despite two postponed weddings and statements in December where Lopez told Cohen they were re-considering marriage, she told Elle in mid-January ‘We want to do it right when we can do it’