Jennifer Garner was spotted out and about in Santa Monica as she ran a few errands earlier on Sunday morning.

The 50-year-old actress opted for comfort during her outing, wearing a short-sleeved shirt and a black skirt.

The 13 Going On 30 star has been working through a busy schedule, and recently flew to New York City to attend The Fast Company Innovation Festival to discuss her Once Upon A Farm company. 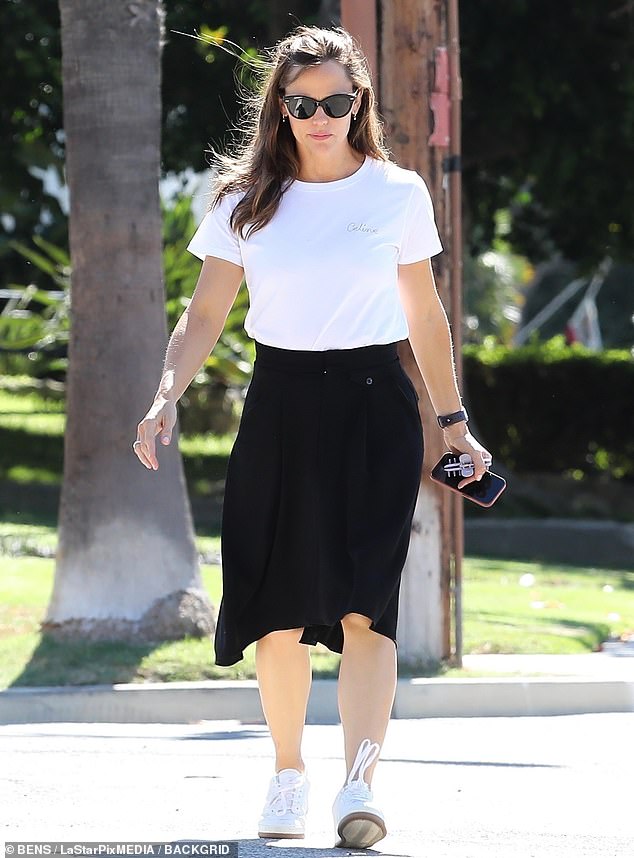 Beautiful: Jennifer Garner, 50, kept her look simple and causal as she ran a few errands in Santa Monica earlier on Sunday

The 13 Going On 30 star opted for a white embroidered Celine T-shirt, which is priced at $590, according to the luxury brand’s website.

She tucked the cotton top into the waistline of her black skirt, which fell down past her knees.

Jennifer chose to slip into a pair of white sneakers to stay comfortable as she strolled about the city.

The beauty appeared to be in high spirits as she made a few stops during her Sunday morning outing. 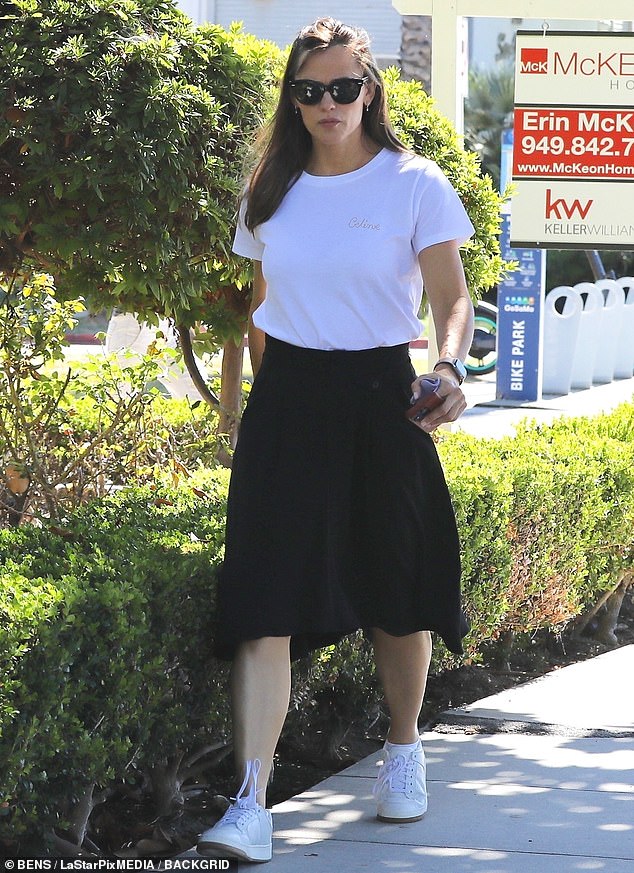 Sunday outing: The talented actress kept her look stylish by wearing a Celine cotton shirt and a black skirt as she ran a couple errands

The Adam Project actress accessorized her ensemble by adding black sunglasses to block out the bright sun.

She also wore a pair of small earrings, along with an Apple watch on her left wrist. She had on a sparkling eternity band on her right hand.

Jennifer opted to not carry a handbag as she ran a couple of important errands, and instead chose to simply carry her phone and a hair clip in her hand.

Her brunette hair fell down straight past her shoulders, while the top portion of her shiny locks were pulled back away from her face. 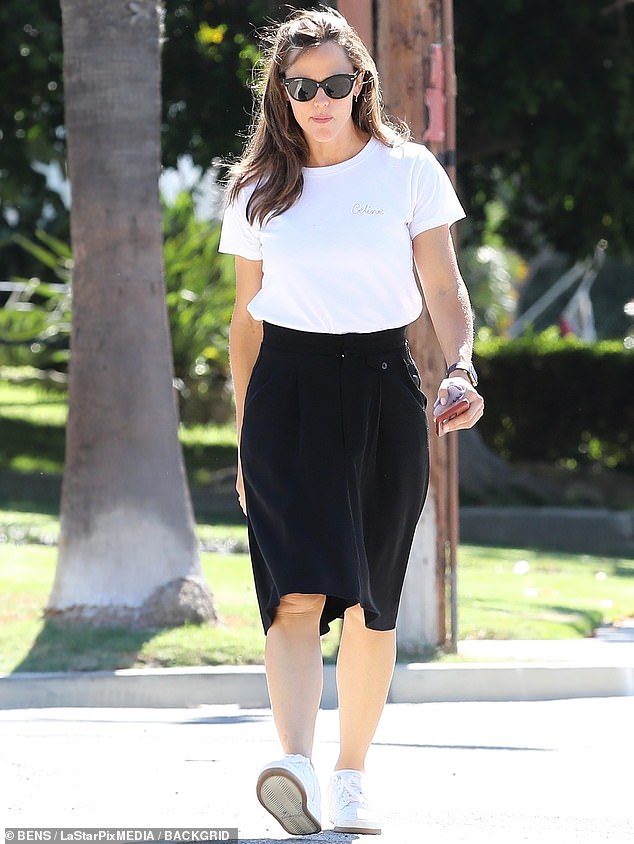 Relaxing: The businesswoman appeared to be in good spirits as she enjoyed a solo outing during the weekend 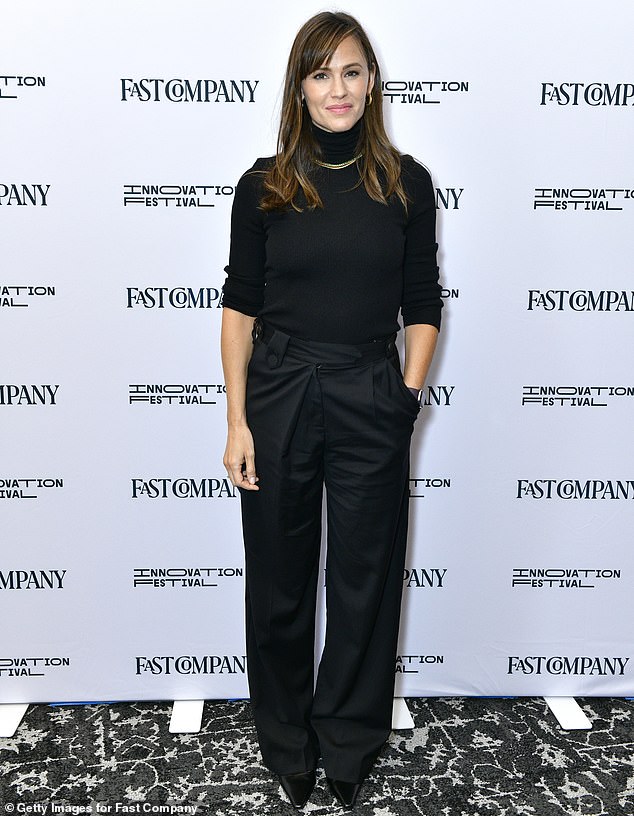 Working hard: Jennifer recently was a speaker at The Fast Company Innovation Festival in NYC earlier on Thursday

Jennifer recently appeared at The Fast Company Innovation Festival held in the heart of New York City earlier on Thursday.

The beauty was business chic in an all-black ensemble as she prepared to speak at the Tiny Tastebuds: Delighting and Sustaining The Next Generation panel.

The film and television star is the co-founder of the popular baby food company Once Upon A Farm, which strives to use ‘fresh’ ingredients. Some of the fruits and vegetables are grown on Jennifer’s family farm in Oklahoma.

As the co-founder and also the chief brand officer of the company, the star revealed during the panel, ‘The business has grown a lot. As a matter of fact, when we were here last time we were less than $1 million a year and now by the end of this year we’re in the $100 million dollars.’

When talking to Forbes in a past interview, the Alias actress explained, ‘We want absolutely the best for our kids. We really believe every mom makes an inherent promise the minute she has a new baby to do right by them.’ 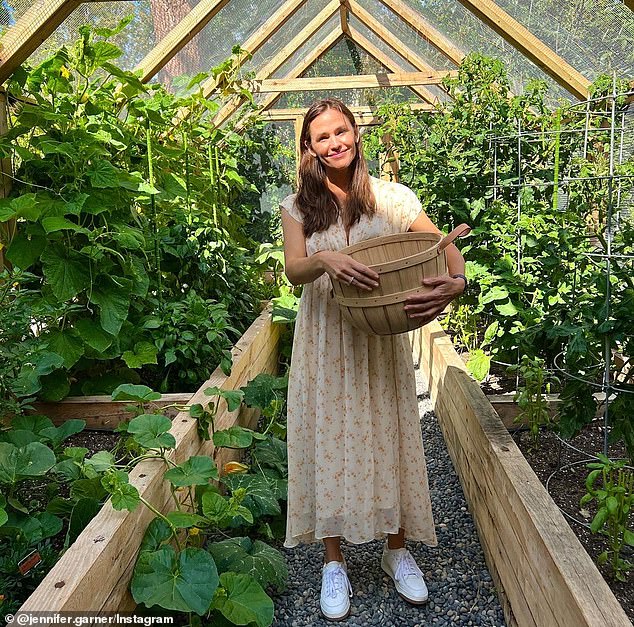 Passion: Alongside acting, Jennifer has another passion for creating fresh and healthy food for growing children 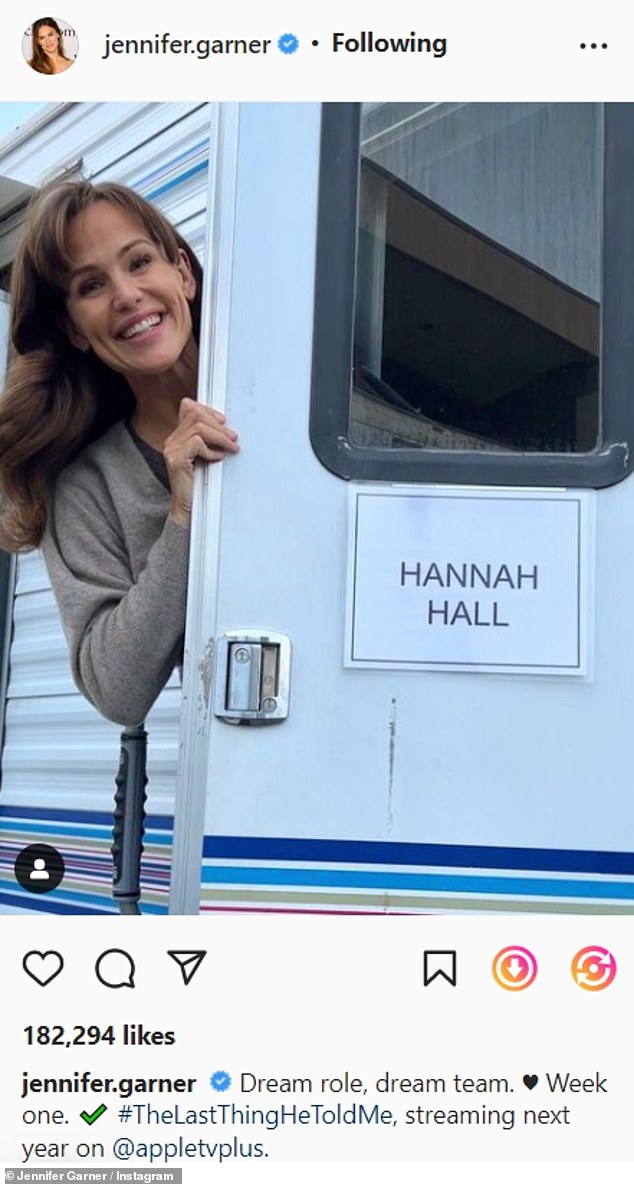 Busy: The beauty has also been cast to portray the role of Hannah in the upcoming Apple TV+ series called, The Last Thing He Told Me

While focusing on the success of Once Upon A Farm, Jennifer also spends time raising her three children — Violet, 16, Seraphina, 13, and Samuel, 10 — whom she shares with her ex-husband Ben Affleck.

She has also been cast to star with the leading role of Hannah in the upcoming Apple TV+ series The Last Thing He Told Me.

The thriller is based on the novel of the same name written by Laura Dave. The series also stars Angourie Rice, who plays Jennifer’s step-daughter, and Game Of Thrones alumnus Nikolaj Coster-Waldau.

The series follows Jennifer’s character as she tries to solve her husband’s mysterious disappearance.