But on Thursday the 51-year-old Friends went all out with three fresh images to say she is ‘grateful’ on Thanksgiving Day.

The Los Angeles based blonde beauty was seen with her new white dog Lord Chesterfield while at her mansion. 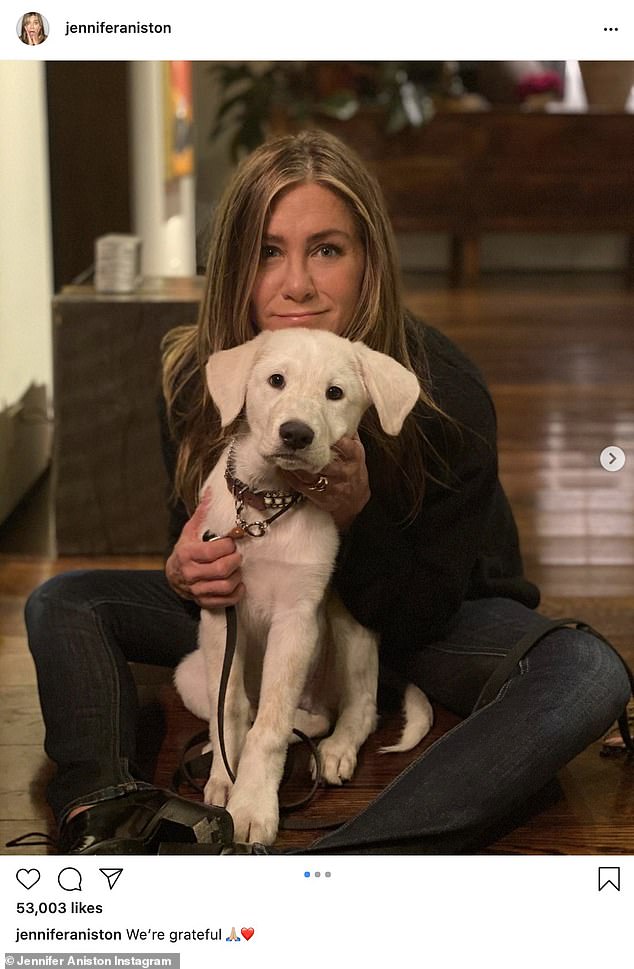 Cheer from a Friend: Jennifer Aniston on Thursday went all out with three fresh images to say she is ‘grateful’ on Thanksgiving Day

Jennifer wore her hair down over her shoulder as she had on a black top and skintight blue jeans and black boots with a chunky heel.

The TV veteran was sitting on a hardwood floor with her legs open and the pooch in front of her.

Oddly, she had a gold band on her wedding finger even though she is divorced from Justin Theroux.

The star uploaded three images where she was doting on the puppy that she adopted earlier this year. 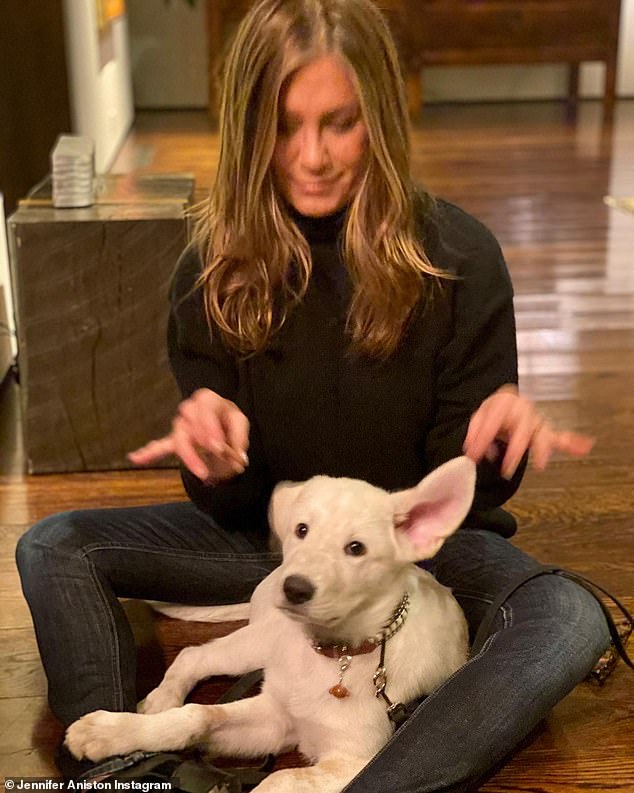 Fun with her puppy: The Los Angeles based blonde beauty was seen with her new white dog Lord Chesterfield while at her mansion

The daughter of soap opera actor John Aniston also has the dogs Clyde and Sophie.

These images were shared just after the star posted a mysterious image to Instagram on Tuesday.

The cover girl’s famous face could barely be seen. 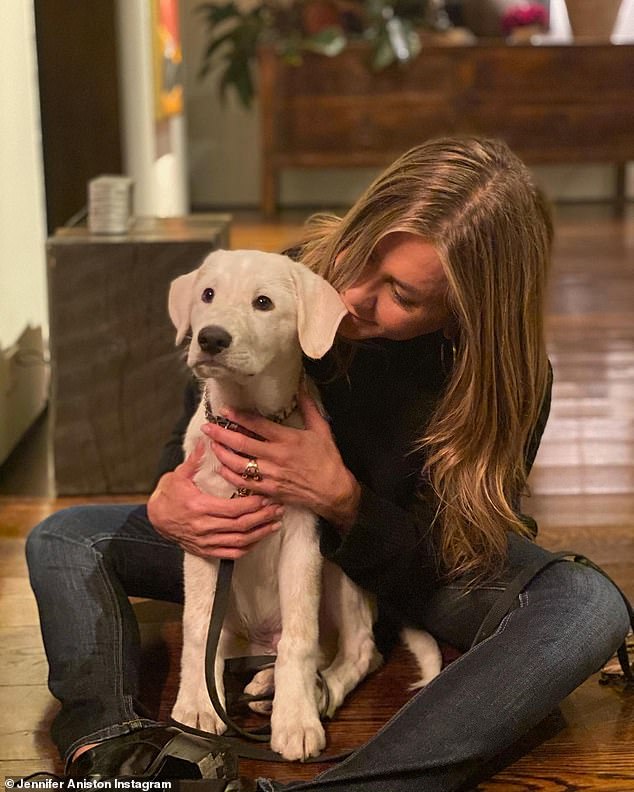 Cool look: Jennifer wore her hair down over her shoulder as she had on a black top and skintight blue jeans and black boots with a chunky heel 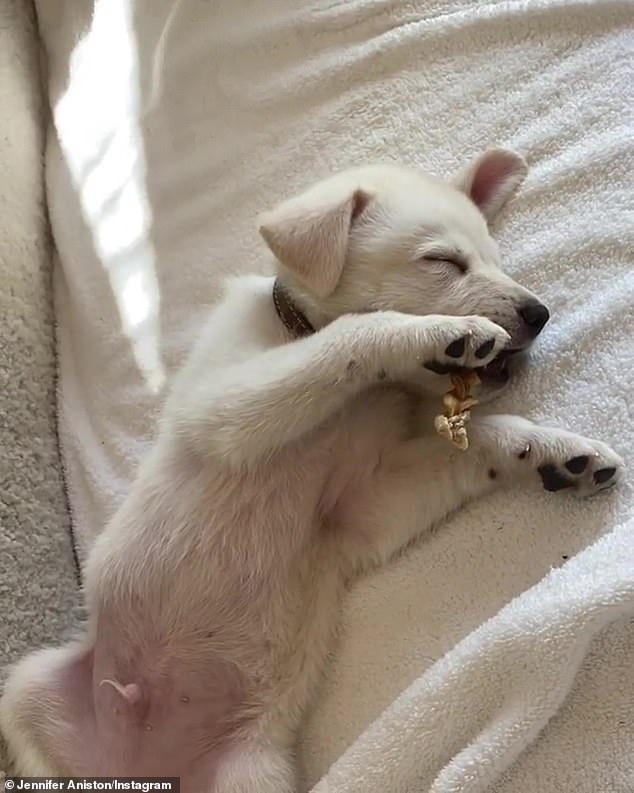 New pup: ‘I’d like to introduce to you the newest member of our family, this is (a very tired) Lord Chesterfield. He stole my heart immediately. A HUGE thank you to @wagmorpets for the incredible work you do,’ she said last month

There was a mystery man laying on the floor as her dog Clyde looked up at her.

‘I see you Clyde,’ the movie star wrote over the photo as she failed to address who the male friend was.

The Emmy winner made it clear she was on the set of season two of her hit series The Morning Show with Reese Witherspoon. 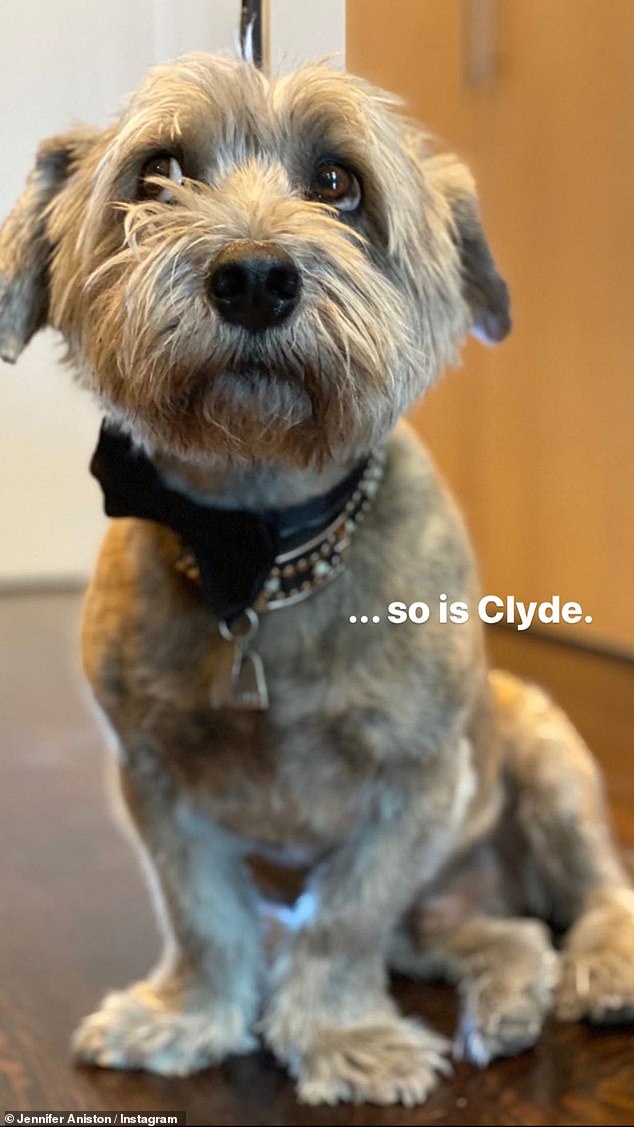 Her little fur child: The siren often shared images of her pooch Clyde, but she has many others 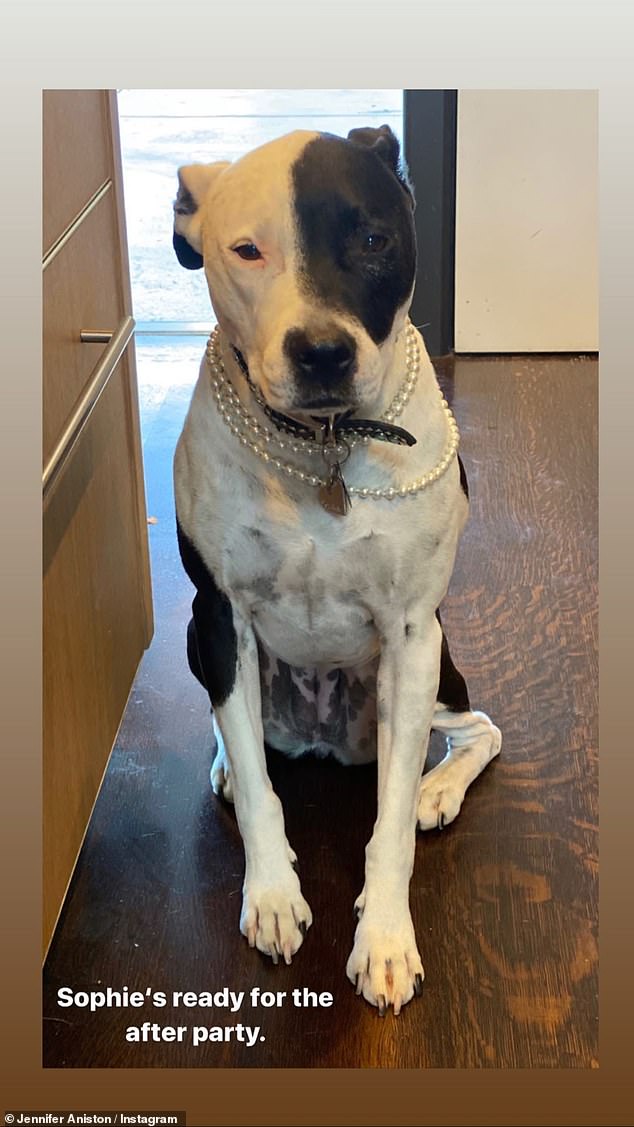 Dressed in pearls: The cover girl also has a dog named Sophie, seen here at home

Aniston was holding up the camera as she wore a dark gray robe over a lace bra with her highlighted hair worn down.

Clyde sweetly looked up at the camera as he wore a dazzling collar.

There was no hint who the man could be but he looked very relaxed as he stretched.  The mystery person had on a gray top and khaki cargo slacks with a silver watch that had a dark face.

The pooch was on the floor looking at mom. 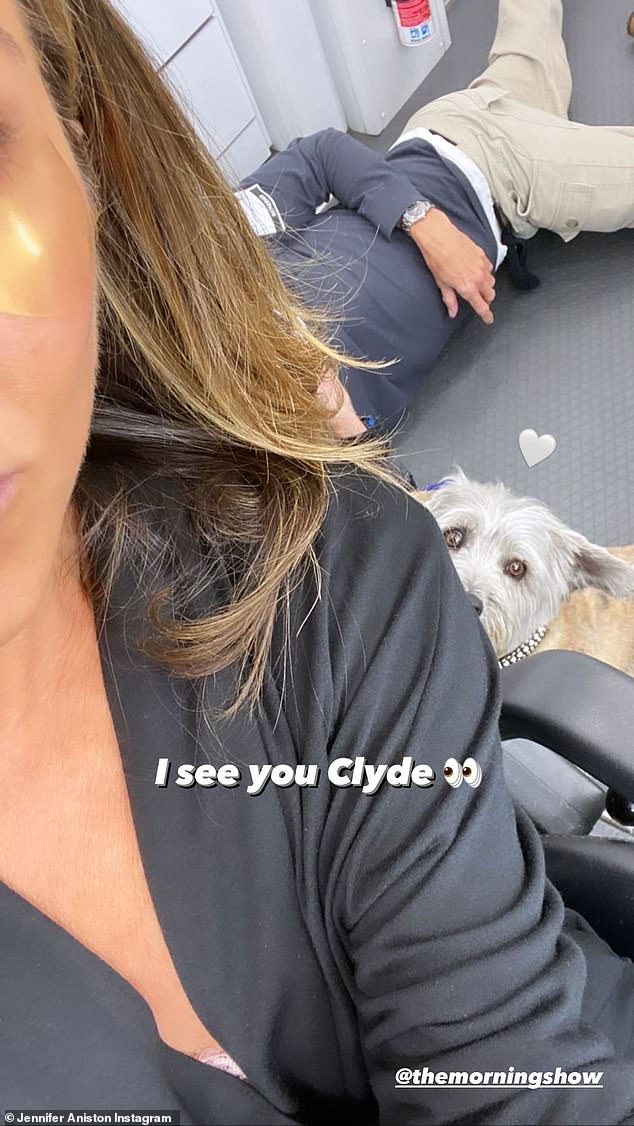 Something is going on here! Aniston shared an image to Instagram on Tuesday where her face could barely be seen. There was oddly a mystery man laying on the floor as her dog Clyde looked up at her. ‘I see you Clyde,’ the 51-year-old star wrote over the photo

She has seemingly been single since divorcing Justin Theroux. 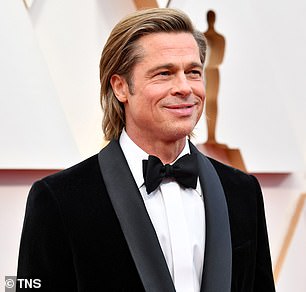 Jennifer was wed to Brad from 2000 until 2005; seen here in February at the Oscars

But has run into ex-husband Brad Pitt several times, most notably at her 50th birthday party in 2019 and at the SAG awards show in January.

They also flirted during the Fast Times At Ridgemont High table read this fall.

This post comes after the news Aniston has partnered with collagen and wellness brand Vital Proteins.

The Along Came Polly actress has been named as the Chief Creative Officer and also the face of the brand’s new campaign, which is due for release next month.

Speaking to People magazine, she said: ‘Our strength starts from within, so I choose good nutrition and the right supplements to start off my day …

‘Collagen is the glue that holds everything together.

‘I’ve always been an advocate for nourishing your wellness from within, which is why I started using Vital Proteins so many years ago.

‘Now to have the opportunity to be a part of the brand in a bigger way, as Chief Creative Officer, is very exciting to me.’

‘We’ve all watched Jen live a life that prioritizes wellness from the inside-out, which she attributes in part to her belief in Vital Proteins, making this partnership so unique and, more importantly, authentic. 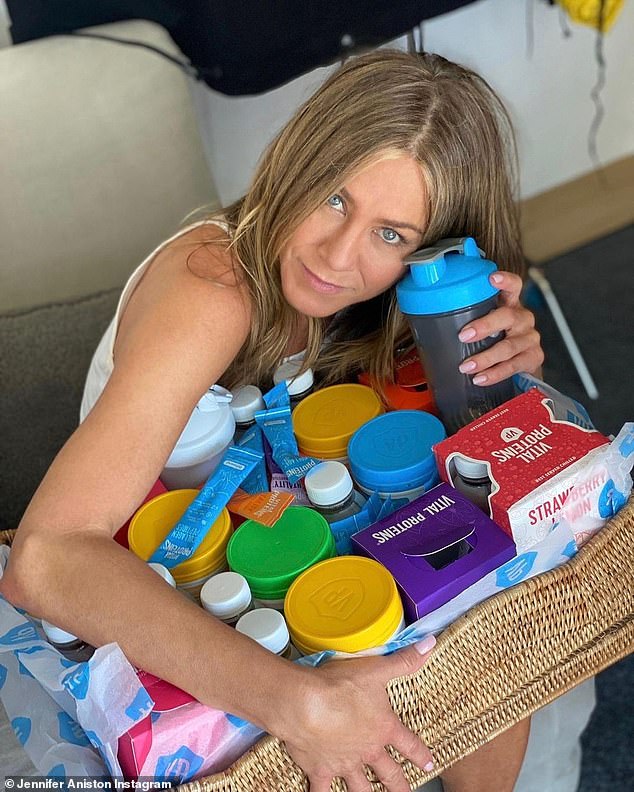 Brand babe: ‘I’ve always been an advocate for nourishing your wellness from within, which is why I started using Vital Proteins so many years ago. Now to have the opportunity to be a part of the brand in a bigger way, as Chief Creative Officer, is very exciting to me,’ Aniston added

‘We are teaming up together to inspire the world to live healthy, and more vibrant lives.’

The best friend of Courteney Cox previously confessed she had been thinking about retiring.

Of her thoughts on retiring, she shared: ‘I would have to say the last two years that has crossed my mind, which it never did before.

‘A different unprepared project … sucked the life out of me. ‘I don’t know if this is what interests me, [I remember thinking].’

And asked what she’d be doing instead of acting, she added: ‘Interior design, probably. I love it. It’s my happy place. It’s really a happy place for me.’ 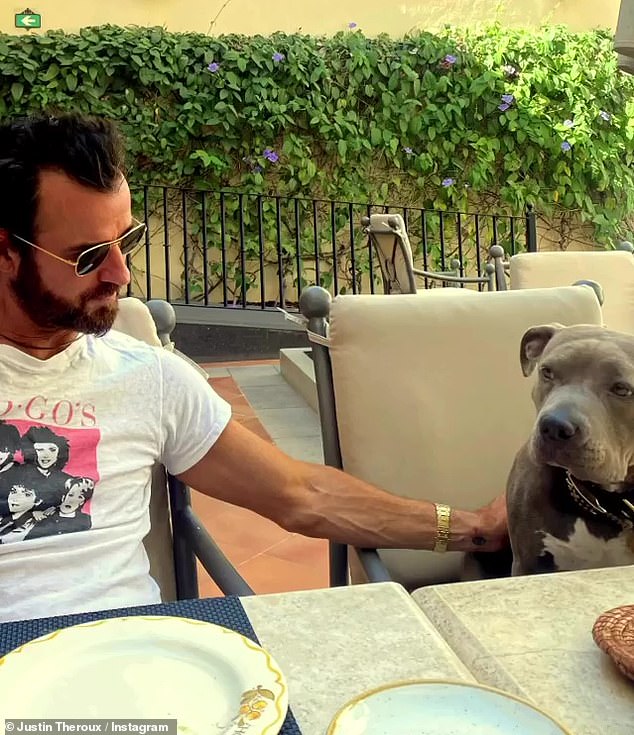 The other ex: Her last husband was Justin Theroux; pictured here with his dog Kuma

Also this fall Aniston has donated a handbag to be auctioned to raise money for American military veterans.

The actress along with other stars such as George Clooney and Mindy Kaling has signed up to support Homes For Our Troops’ 4th Annual Veterans Day Celebrity Auction. The non-profit organisation raises funds to build specially adapted custom homes for severely injured post-9/11 veterans.

Clooney, 59, has gifted an OMEGA Globemaster Watch, whilst Mindy has given the charity a green dress with floral print by Sachin & Babi.

Speaking about his involvement with auction, the Ocean’s Eleven actor said: ‘I am happy to be joining this auction for another year and bring attention to Homes For Our Troops’ important mission. The adapted homes built by this nonprofit help Veterans regain their independence and move forward in their lives.’