Jason Derulo was spotted front row and center as he watched and cheered on his ex-girlfriend, Jena Frumes, as she showcased swimsuits during Miami Fashion Week.

The singer, 32, had their one-year old son propped up on his lap, who also was in attendance to support his mother.

Earlier this month, in response to a comment on an Instagram post, the model, 28, claimed that the songwriter not only cheated on her, but allegedly doesn’t assist with child support. 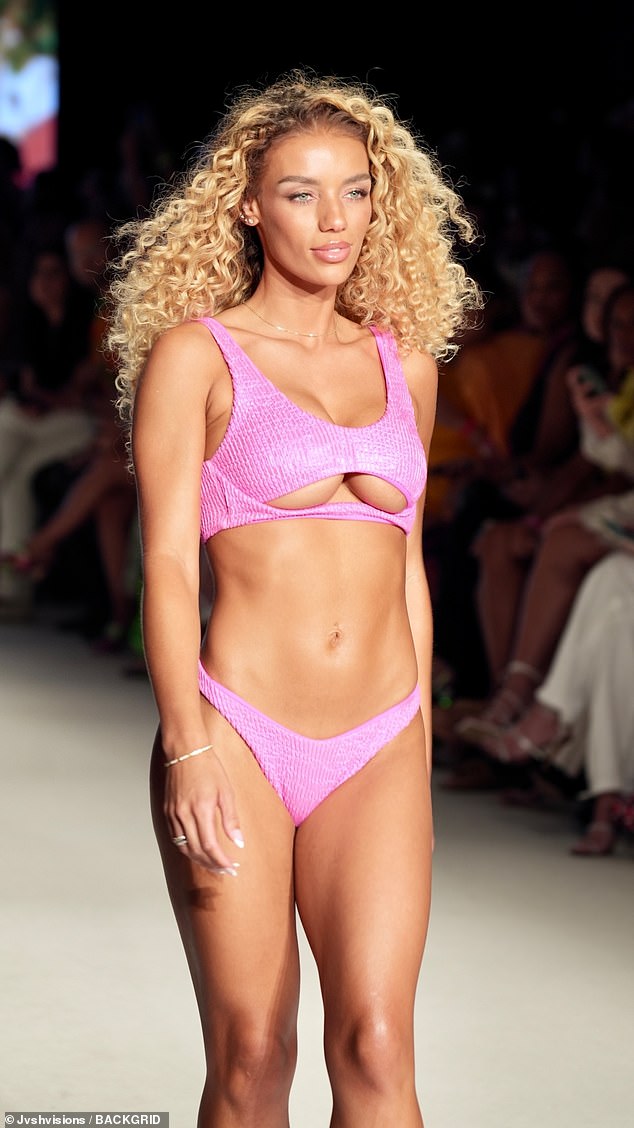 Stunning: Jena Frumes, 28, walked the runway for Miami Fashion Week with her ex, Jason Derulo, 32, and their son, also in attendance

Jason sat in the front row, wearing a sleeveless, checkered flannel shirt with colors of black and yellow.

He added a pair of black, ripped joins and opted for comfort by slipping on a pair of Philip Plein hi-top sneakers.

The price of the shoes can range around $700, according to the luxury brand’s website. 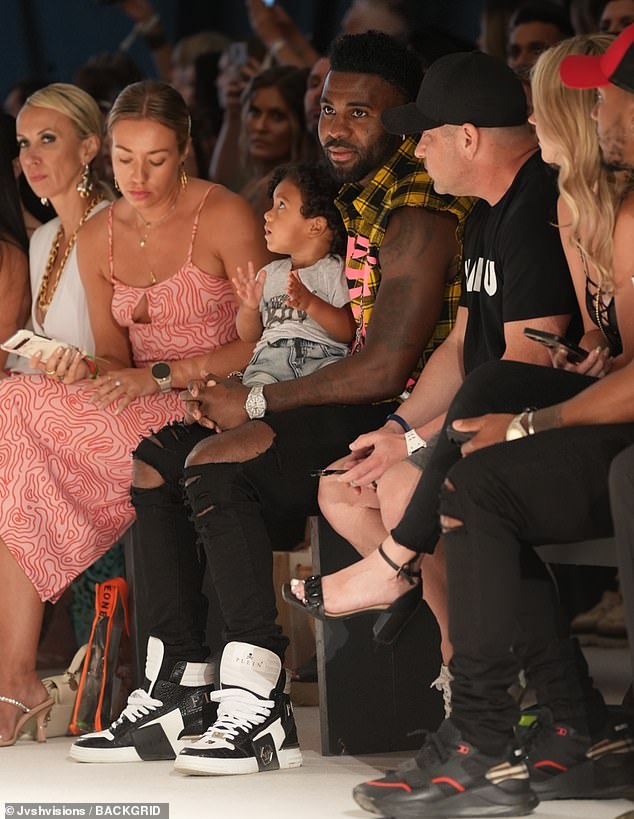 Support: The Savage Love singer was spotted propping his son on top of his lap as they watched his ex strut on the catwalk in Miami 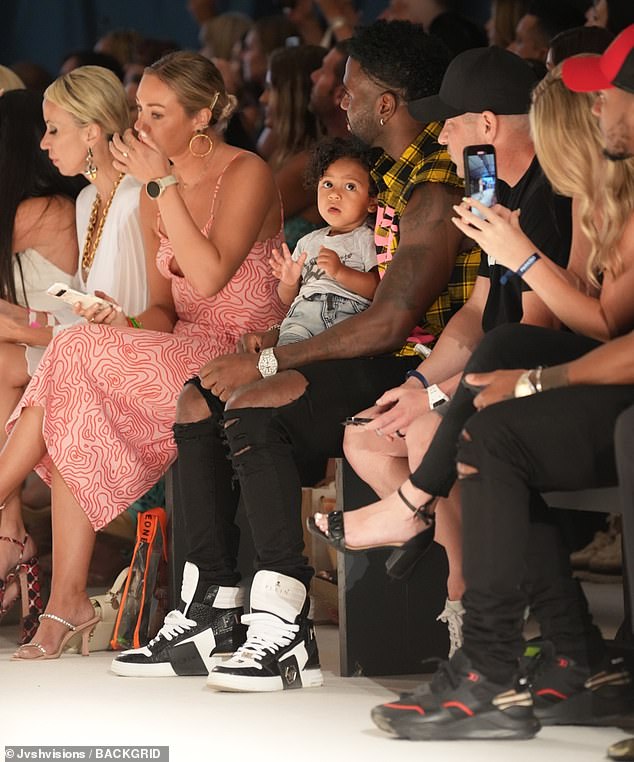 Moving on: The actress and singer appear to be trying to move on after the model stated in an Instagram post that he had cheated on her 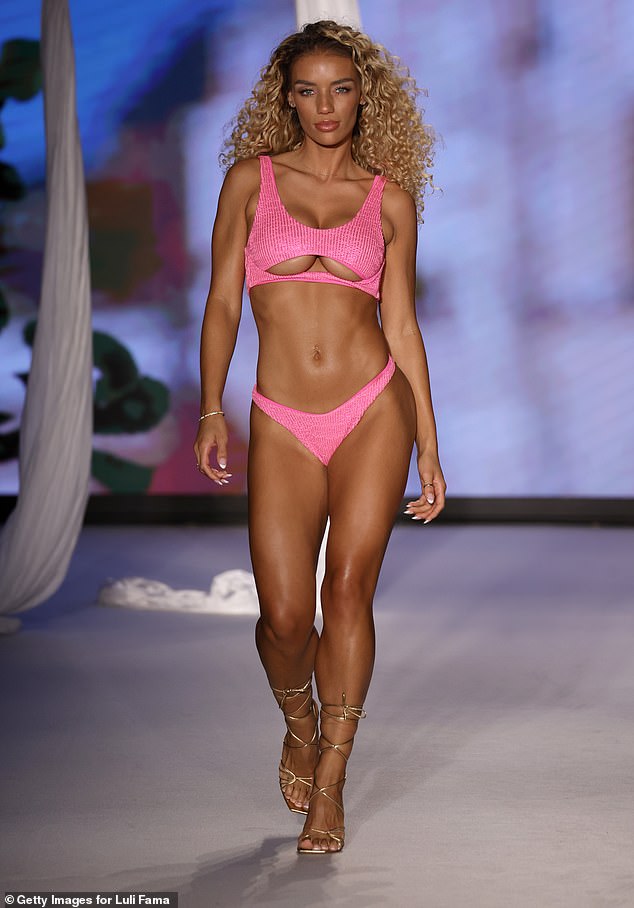 Beautiful: The star donned a vibrant pink bikini as she strutted for the brand, Luli Fama, during Miami Swim Week 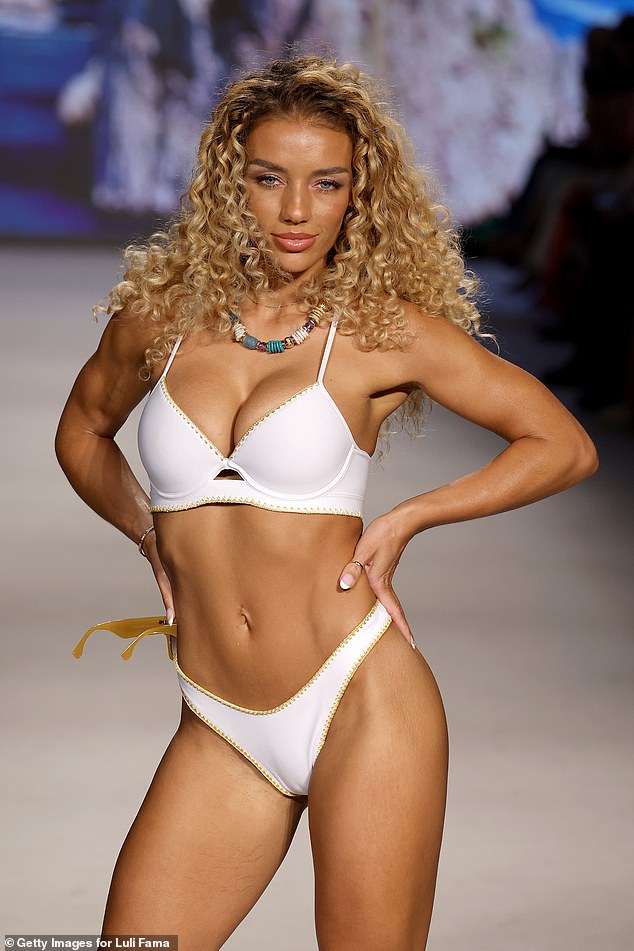 Runway ready: Jena showed off her toned abs and fit physique in various swimsuits for the brand, Luli Fama

She flaunted a pink bikini, showing off her toned abs, along with a white two-piece swimsuit.

The model wore a pair of open-toed gold heels, with straps that wrapped around up past her ankle.

Later on in the show, the She Ball actress showcased a colorful blue jumpsuit, with a cut-out in the lower chest area. The straps were made of a gold chain and Jena posed with confidence as the cameras flashed in front of her.

The star wore natural looking makeup, allowing her blue eyes to pop and stand out.

Last month at the end of June, the star uploaded a photo onto her main Instagram page, flaunting her fit figure in a blue bikini.

She typed out a caption to go along with the picture, writing, ‘You are beautiful, you are worth it and YOU are irreplaceable. Don’t forget that.’

However, one comment from a unkind fan on the post caused the mom of one to respond and defend herself.

‘You’re not married which means your child is a b*****d and you’re playing the w***e role – Ya’ll got morals mixed up,’ the troll penned. 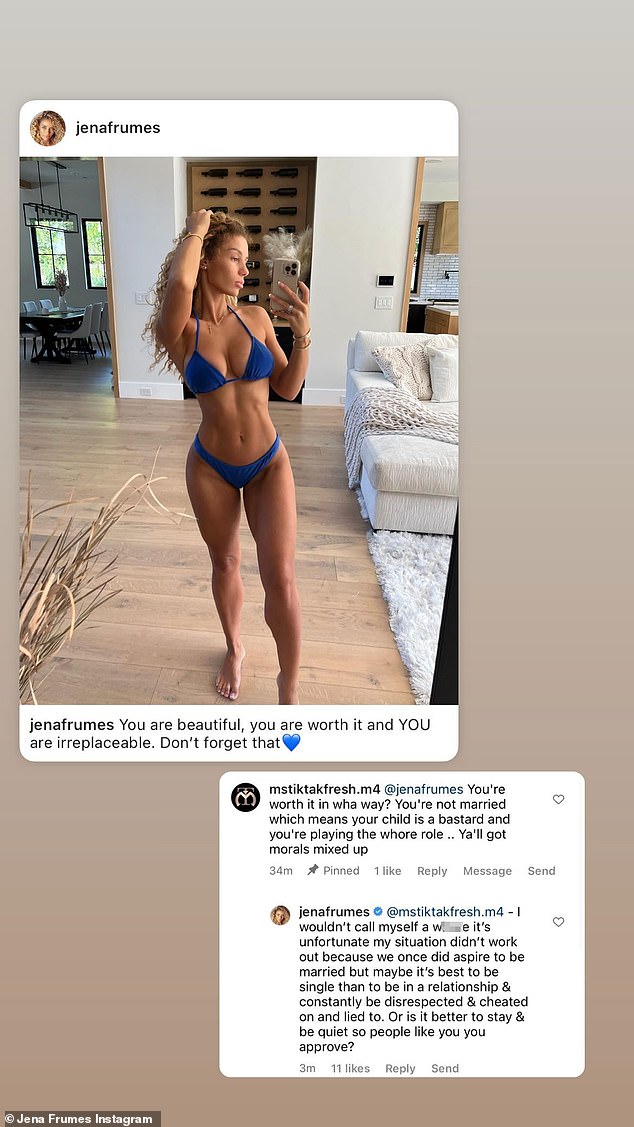 The actress clapped back: ‘I wouldn’t call myself a w***e It’s unfortunate my situation didn’t work out because we once did aspire to be married but maybe it’s best to be single than to be in a relationship & constantly be disrespected & cheated on and lied to.’

Afterwards, she wrote out a longer statement on her Instagram detailing her former relationship with Jason.

‘Women really don’t deserve to be treated and judged the way they are. No one aspires to be a single mom. It’s the biggest heartbreak and failure for me personally knowing I’m alone in this when I wanted love and wanted marriage & the happy family unit,’ she penned in a text only post. 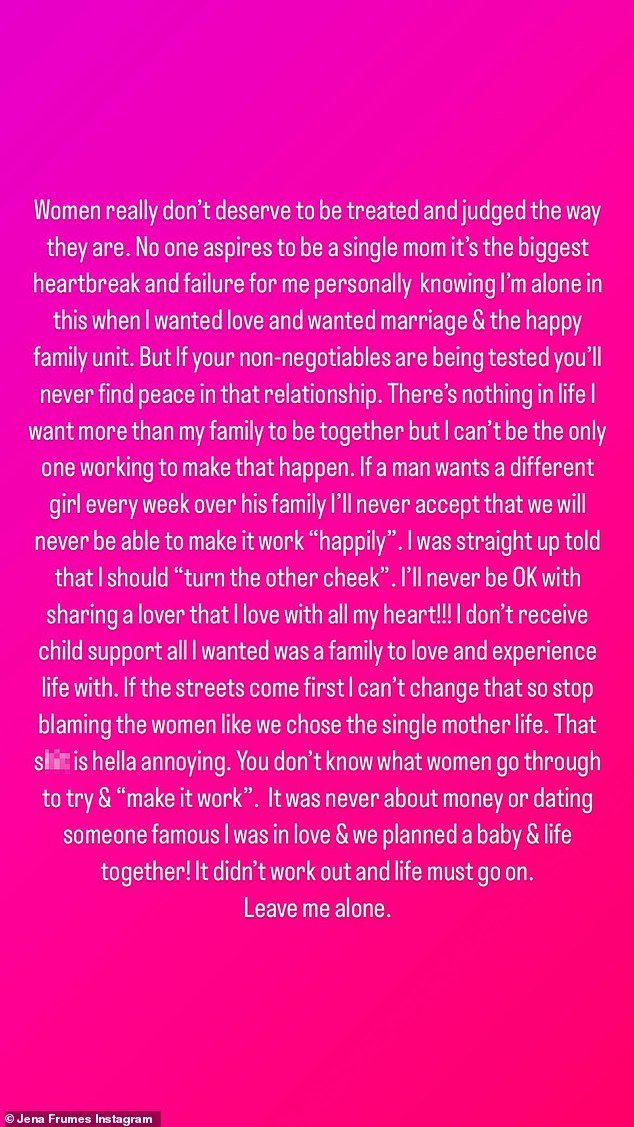 Follow up: After the model and actress defended herself to a harsh fan, she released a longer statement on social media 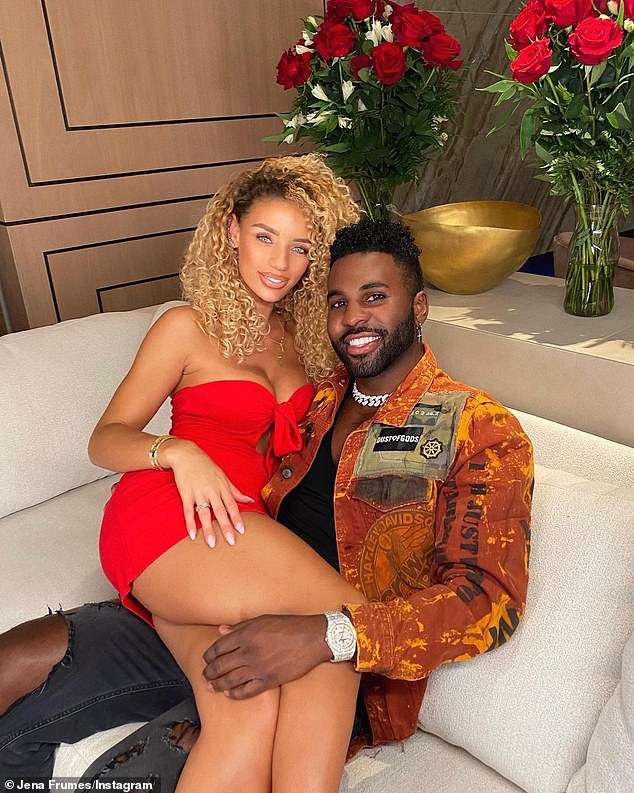 ‘Leave me alone’: At the very end of her statement, she asked commentators and fans to refrain from saying unkind words about herself and her family

‘There’s nothing in life I want more than my family to be together but I can’t be the only one working to make that happen,’ the mother of one continued. ‘If a man wants a different girl every week over his family I’ll never accept that…we will never be able to make it work ‘happily.’

‘I was straight up told that I should ‘turn the other cheek.’ I’ll never be OK with sharing a lover that I love with all my heart,’ she wrote, adding that she does not ‘receive child support.’

She ended the statement by explaining that their relationship simply ‘didn’t work.’ 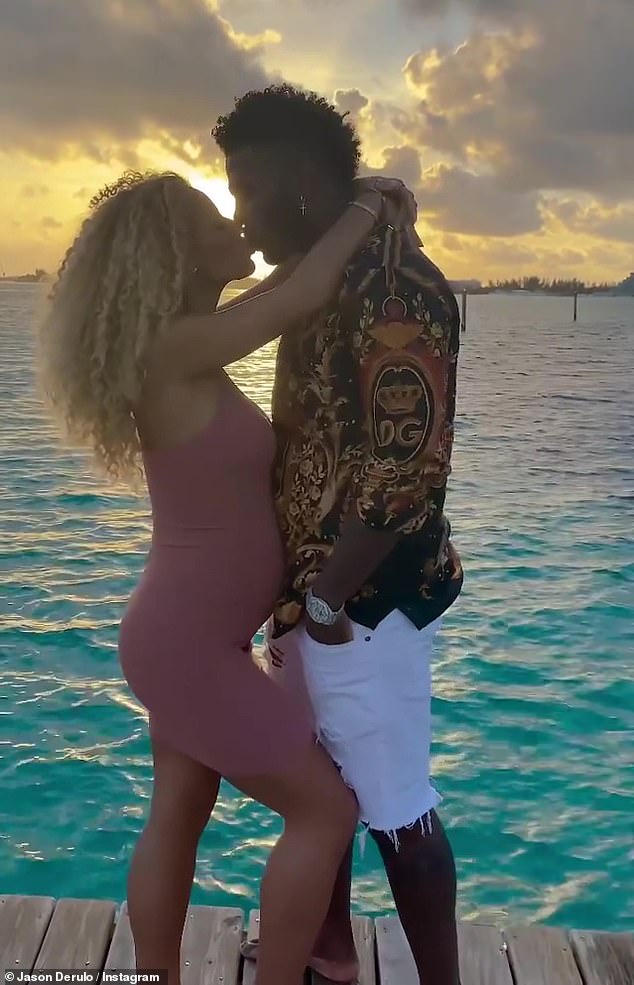 In the past: While in a relationship, the two welcomed their son, Jason King Derulo, to the world, in 2021 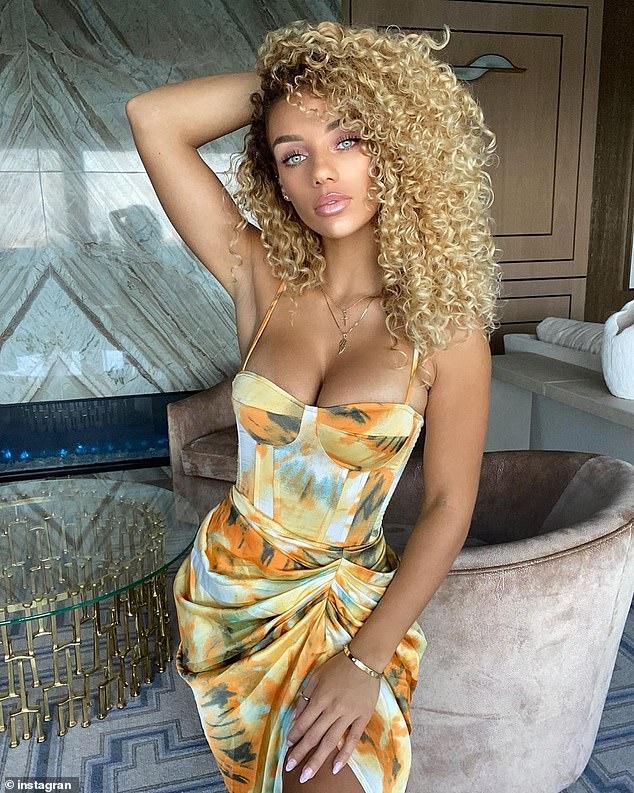 Working hard: Jena and Jason appear to be putting issues in the past and focusing on being good parents to their son

Although the social media influencer voiced those claims on her account, Jena and Jason appear to still be in close communication, and perhaps making amends with his appearance to watch her on the runway earlier on Saturday.

The two also smiled and posed for photos backstage during the show, with their son also in the pictures.

They seem to be aiming to put the past behind them, and focus on co-parenting their child.