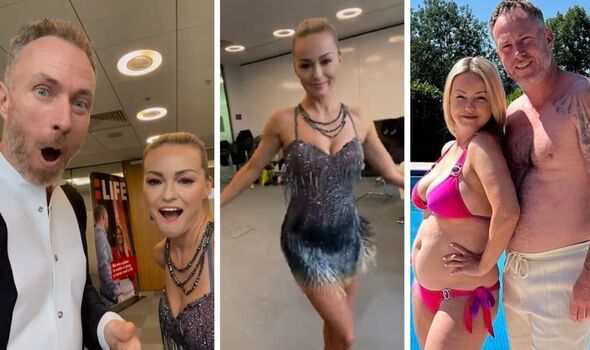 James Jordan boasted that he now no longer had a belt small enough to fit after a dramatic weight loss, while Ola could scarcely stop shimmying around with buoyant energy as she showcased her own glitzy costume after getting smaller following the birth of daughter Ella, now two.

James Jordan, 44, and his Strictly Come Dancing winner wife Ola, 40, were in high spirits after shedding the “mum and dad bods” they say they had developed following the birth of their daughter, Ella.

As they embarked on a dance performance together in Leicester, they exclaimed: “We’re back guys!!

“Back in our dance shoes, back in our old outfits and back together again feeling fitter and healthier than we have in years!” the pair told their 564,000 collective Instagram followers.

“It’s so nice to be able to fit back into our dance costumes!” he exclaimed, adding joyfully that that he’d been able to lift Ola up.

A look of momentary horror flashed across Ola’s face when he spoke of how he would have needed “to bring a crane in to lift you” months earlier but she quickly recovered her composure, and shimmied around to show off her weight loss.

Ola Jordan had fearlessly flaunted her rounder stomach earlier in the year in a pink bikini, while husband James Jordan confessed he’d piled on the pounds too – but the thought of performing again on the stage motivated them to lose the extra weight.

James Jordan previously caused a stir with his controversial comments

James Jordan had addressed the issue in an interview for Express.co.uk, insisting: “There’s no man in the world who will say, ‘Oh no, I much prefer my wife being much bigger and heavier’. They might tell you, ‘Oh you look lovely darling’, but would they prefer you slimmer? Yes they would.”

The weight loss was a cause of celebration for James and Ola Jordan, with James declaring that the glittery fringed mini dress his wife wore for their performance would have been “a bit like a hanky” on her just a few months earlier, before her figure had shrunk. Meanwhile, followers marvelled that seeing the pair in their stunning outfits had “brightened up a miserable afternoon”.

James Jordan is known for his straight-talking comments

James Jordan seems to have a knack for provocation and only last week boldly declared that Will Mellor’s cape work had been “atrocious”, while his fellow Strictly 2022 contestant Fleur East was someone he simply couldn’t “warm to”.

James Jordan celebrated his 19th wedding anniversary with Ola back in October, and he posted a throwback photo of the pair, in which he was almost unrecognisable with his youthful longer hairstyle. To mark the occasion he wrote: “I will always love you more than you will ever know.”