X Factor winner James Arthur has admitted to piling on the pounds during lockdown, alleviating his boredom by eating cake.

The singer, 32, revealed that he has ballooned to 17 stone – but is determined to shed the excess weight by the time lockdown ends.

The Falling Like The Stars crooner told The Sun: ‘I have put on a fair bit of weight since the beginning of the lockdown because there’s nothing else to do but stuff my face. I’ve got a sweet tooth so it’s just cake really. I love cake. 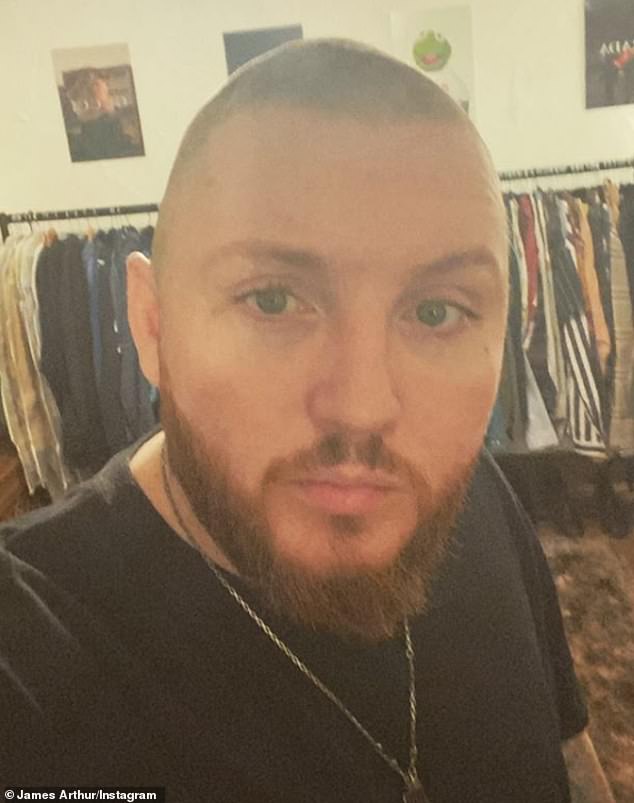 Locked down: X Factor winner James Arthur has admitted to piling on the pounds during lockdown, alleviating his boredom by eating cake

‘I’m pretty much a vegan so I’ve been having the fake meat — sausage sandwiches and stuff like that I’ve been digging into.’

He went on to explain: ‘I’ve set myself a goal to lose a bit of weight. It might sound extreme but I’m 6ft 3in and I weigh 17st so I’d like to drop a couple of stone if possible.

‘I want to come out of this thing in the best shape that I’ve ever been in, that’s something I’m genuinely striving for.’

James explained that he has been on 10 mile bike rides and has home workout equipment at his house. 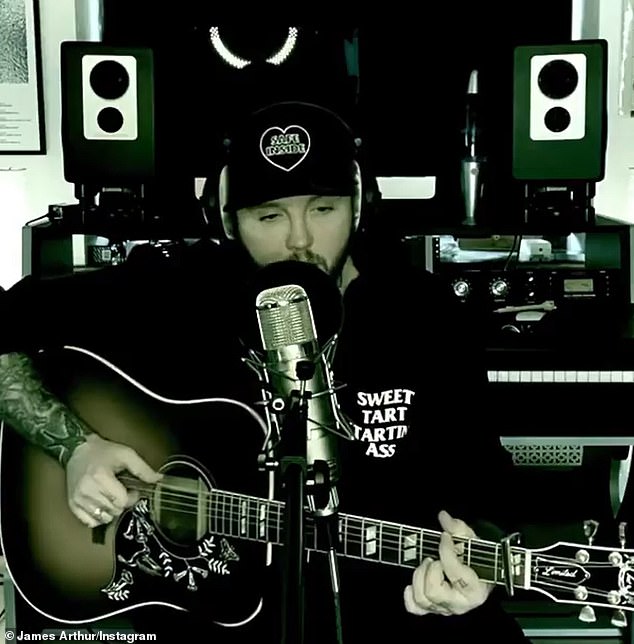 Bored: The singer, 32, revealed that he has ballooned to 17 stone – but is determined to shed the excess weight by the time lockdown ends 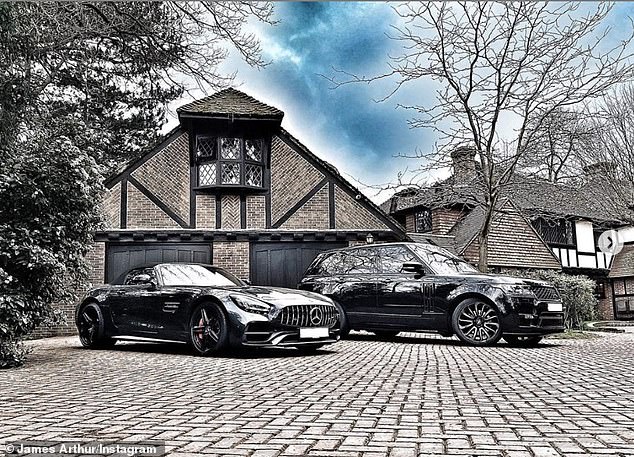 Staying put: As the UK went into lockdown, he gave fans a glimpse at his palatial-looking home after admitting his ‘health anxiety’ has got the better of him

He has done his bit for the NHS Charities Together appeal amid the current health crisis, by releasing single Safe Inside.

James did reveal he had coronavirus symptoms earlier on in the pandemic.

As the UK went into lockdown, he gave fans a glimpse at his palatial-looking home after admitting his ‘health anxiety’ has got the better of him. 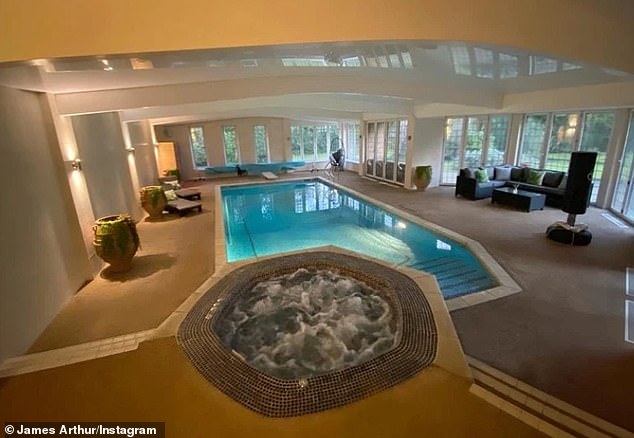 Luxury: The hitmaker shared several snaps from inside the property, including an enormous indoor pool room with French doors and a leather seating area beside the window 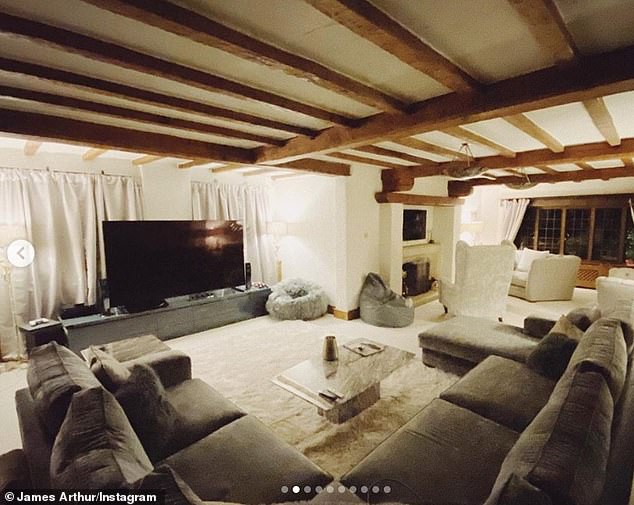 Spacious: James also gave his social media followers a look at his sitting room which features a large dark brown couch and a cream carpet 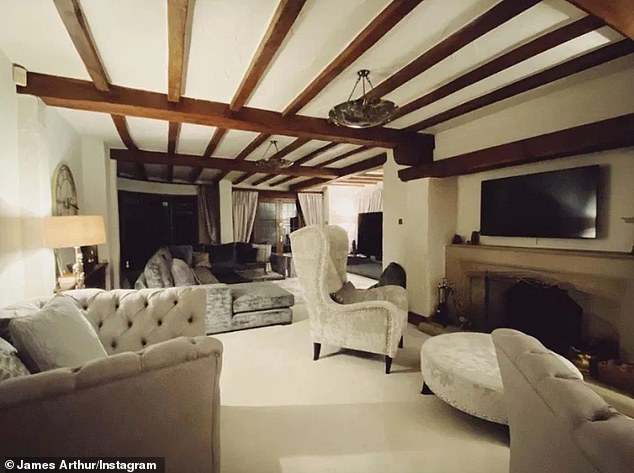 Comfy: It also boasts a large flat screen TV while the sitting room leads into the family room which has another TV with a smaller cream couch and an arm chair.

James admitted in March that he was finding it difficult trying to pass the time at home after recently performing on stage.

He wrote: ‘Finding it hard to go from the euphoria of doing the shows every night to absolutely jack all… it’s only day one for me and I’m struggling, especially with no football. What the actual f**k do I do?’

James, who has asthma, described his symptoms, writing: ‘I have a cough today… trying really hard not to let health anxiety get the better of me.’

It comes after James was forced to cancel a gig in Barcelona in January due to coming down with an illness.

The singer told disappointed Spanish fans he would be rescheduling the date after seeking medical advice from his doctors, who told him to rest. 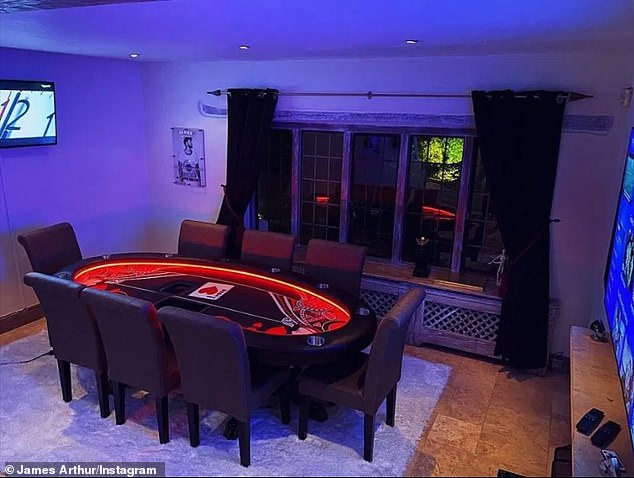 Entertainment: James also has a games room where a large poker table takes up the majority of the space where he and his friends can relax in front of the TV 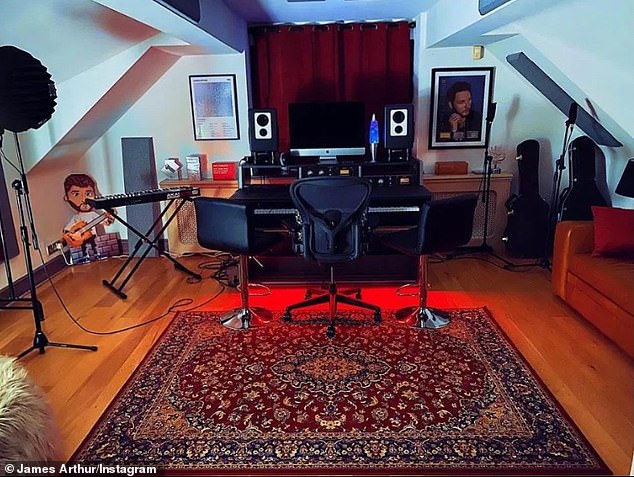 Creative: James also posted a snap of his music room where he has undoubtedly wrote many of his hits 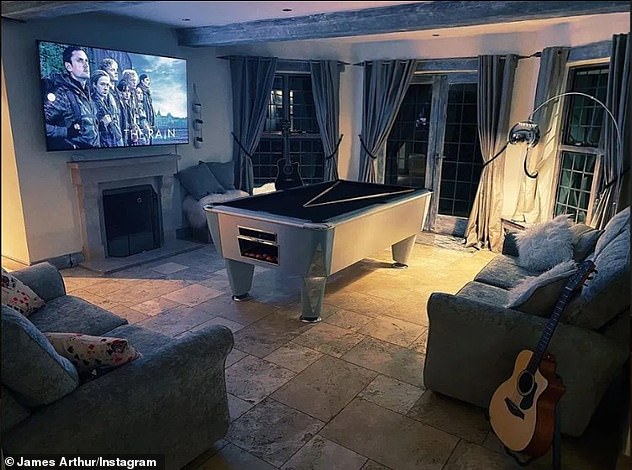 Cosy: In another living room area, James has two more comfy looking couches that sit across from a large pool table 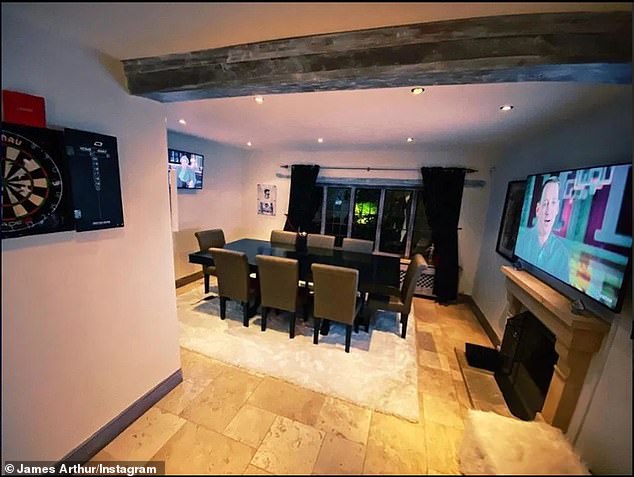 Home: James also shared a snap of his dining room area which features a tiled floor and a cream rug

He tweeted: ‘I’m absolutely gutted to say I have to cancel my show at Razzmatazz in Barcelona this evening, I’ve become really unwell and doctors have advised I need to rest.

‘I’m really sorry guys. If you contact your original point of purchase they will inform you how you can get a full refund. Hope to see you all again very soon. James.’

James rose to fame when he won The X Factor in 2012 and has since gone on to release three successful studio albums.