‘Know your worth!’ Jacqueline Jossa is urged to DUMP husband Dan Osborne as she puts her wedding ring back on amid cheating claims

Jacqueline Jossa has been urged to dump Dan Osborne by concerned fans.

Jacqueline came out to the reports on Sunday after being crowned Queen Of The Jungle, and has since put on an united display with her other half by putting her wedding ring back on. 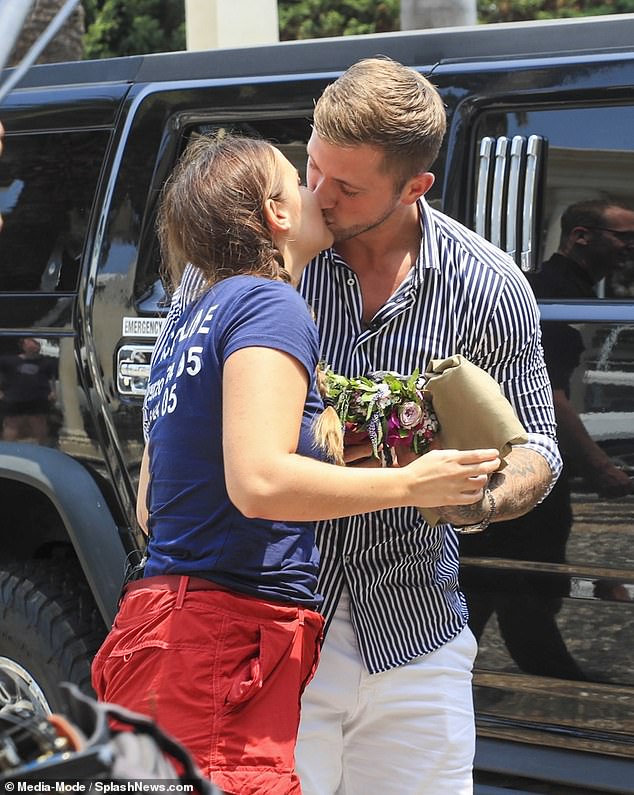 United: Jacqueline Jossa has been urged to dump Dan Osborne by concerned fans. The soap star, 27, was competing in I’m A Celebrity when Dan was hit by claims that he cheated on her

Shocked fans took to Twitter to share: ‘hope this will make Jacqueline know her worth and dump the cheater’; ‘I feel like Jacqueline is in a Rom Com and she’s going to get back to the hotel, read the tabloids, dump her scumbag man and land an amazin Hollywood role that wins her an Oscar fingers crossed #ImACelebFinal’

‘I’m glad Jacqueline has won & has found some confidence. Now I hope she uses it to dump her piece of s**t husband #imaceleb #imacelebfinal’; ‘WHY did Jacqueline not dump Dans sorry a*s on the bridge would have been the best end #ImACeleb

‘Well, I hope that Jacqueline has enough courage to dump his cheating scum of a man she calls her husband #ImACelebFinal; ‘Come on now, Jacqueline, do yourself a favour and DUMP HIM! #ImACeleb’. 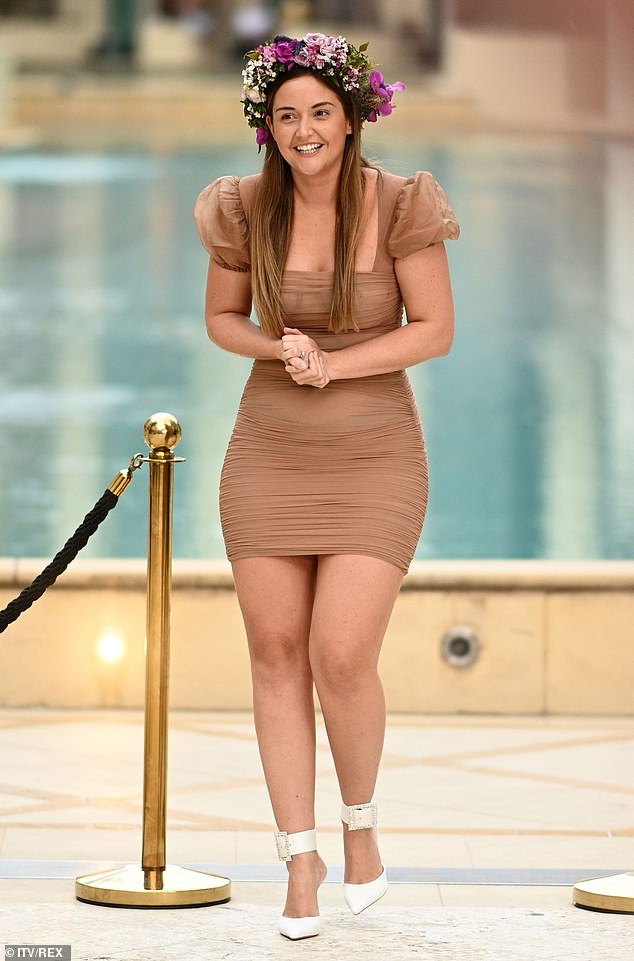 Bling: Jacqueline came out to the reports on Sunday after being crowned Queen Of Jungle, and has since put on an united display with her other half by putting her wedding ring back on

However, some fans claimed that this could be the turning point in their relationship, penning: ‘Nothing worse for a woman’s head than being told he cheated but he swears blind he didn’t. I hope you haven’t Dan, but maybe some lifestyle changes would benefit all these stories and Jac’s self esteem. How would you be if it was the other way round?

‘Made me cry seeing you reunited at the bridge, so happy for her’; ‘The way you went to hug her omg got me crying ! So happy for her xx’ 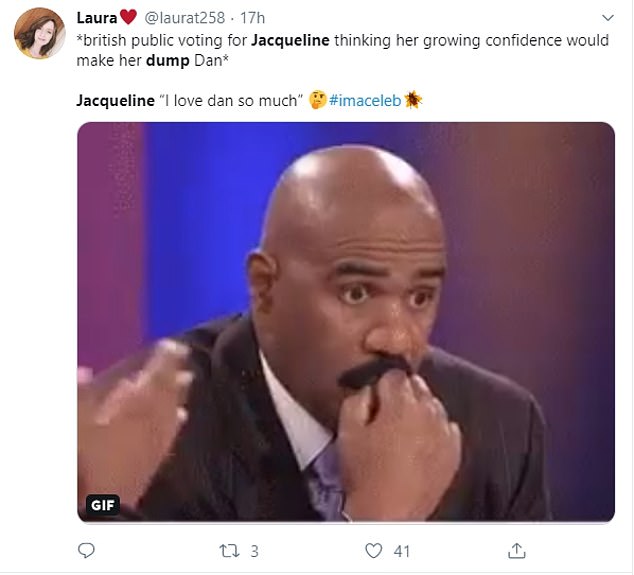 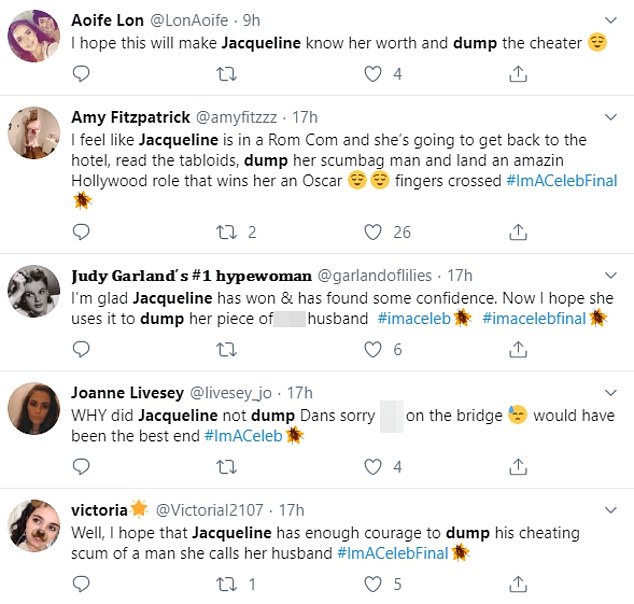 Hitting out: Jacqueline’s fans claimed that the soap star should use her stint on I’m A Celebrity to give her the confidence to dump her husband

A spokesman for Dan added to MailOnline: ‘This story is not true and Dan will be seeking legal advice.’

In her interview, Chloe claimed Dan had sex with American reality star Natalie, before getting intimate with Chloe – after the group had ‘let loose’ during a ‘debauched’ evening.

True love: However, some fans claimed that this could be the turning point in their relationship and urged the pair to keep working through their issues

Chloe said: ‘I feel so sorry for Jacqueline. She deserves to know what Dan is. He’s making a fool of her. He should be faithful to his wife.

‘After it happened Dan was full of himself. He didn’t seem to care what had just happened in front of everyone.’

After being crowned Queen Of The Jungle on Sunday Jacqueline became the first winner in the show’s history to cancel live TV and newspaper interviews.

There were also reports campmates Myles Stephenson, 28, told Jacqueline his ex-girlfriend Gabby Allen, 25, did have a fling with her husband while they were in the jungle. 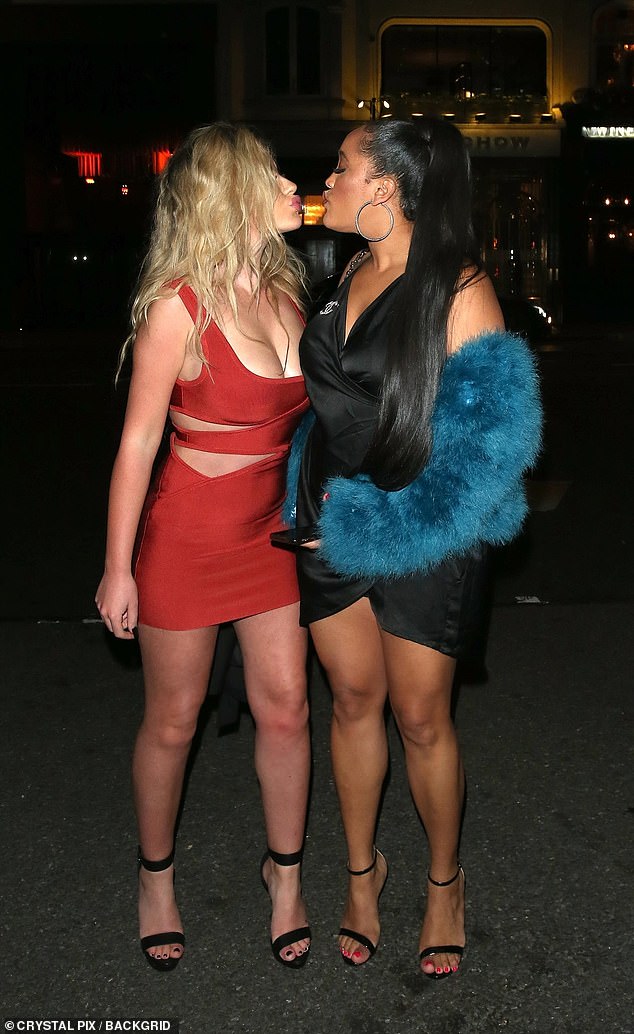 A spokesperson for I’m A Celebrity told MailOnline: ‘Jacqueline wants to spend as much time as possible with her family in OZ before they have to travel back to the UK. Plus she’s filming Coming Out.’

The actress’ marriage two-year marriage has been chequered with allegations of Dan cheating on her.

In March, Dan denied claims he had kissed Love Island’s Alexandra Cane behind Jacqueline’s back and a month after that, he also denied a fling with his PR pal Steph Ledigo.

And in 2015, he spoke of his regret over staying at his ex Megan’s house (the mother of his son, Teddy) as this led to cheating rumours.

The Only Way Is Scandal: A look back at Dan’s personal woes

2015:  Dan’s relationship with Megan Tomlin comes to a nasty end when audio recordings threatening to ‘stick in a knife’ in her were published.

The fallout led Dan to be axed from The Only Way Is Essex, and his relationship with Megan came to an end after it was revealed his now-wife Jacqueline Jossa was pregnant with his child.

May 2018:  MailOnline exclusively revealed Jacqueline had contacted a mystery girl to quiz her over an alleged night of passion with then estranged husband Dan

May 2018: Dan is rumoured to be getting close to Gabby Allen when they attend a bootcamp in Spain. They have both denied they had an affair

May 2018: Jacqueline and Dan split after less than one year of marriage amid claims rows had been sparked by Dan working away from home

August 2018: Dan appears on Celebrity Big Brother where he is awkwardly reunited with Gabby

September 2018: Dan reaches the final of CBB and reunites with Jacqueline and his family. Jacqueline confirms they have reconciled

March 2019: In March, it was claimed Dan had been seen kissing Love Island star Alexandra Cane in a Manchester nightclub. This was denied by both parties