The Colombian singer teased his fifth studio album, titled Jose, after the release of his latest single, “Qué Locura,” which translates to what madness, on Friday.

Directed by Jose Emilio Sagaró, the music video takes place in an art gallery with Balvin, 36, sharply dressed in a custom Nike blazer and shoes. In the open space, there are various performance art features, some which include the artist surrounded by dancers and cameras flashing in his face. He is also seen holding an umbrella as rain pours down on him. The video has people on display for the entertainment of others.

Following the single’s release, Balvin — who recently welcomed his first child with girlfriend Valentina Ferrer — shared screenshots of his album cover on Apple Music. The LP is scheduled to drop on September 10. 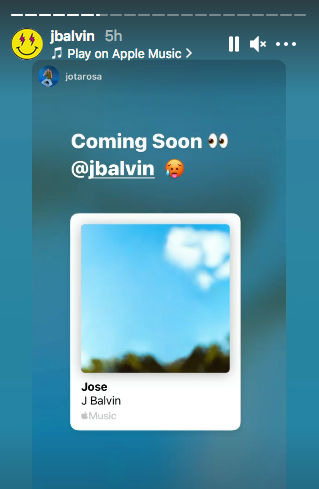 Jose follows Colores, which was released in March 2020. At the time, Balvin opened up to ET about his reservations to release the album amid the coronavirus pandemic. The 10-track album debuted at No. 1 in 14 countries on Apple Music.

“There are moments where you have to think that it’s not about winning. Sometimes it’s about sharing too,” Balvin said of his thought process for releasing his album. “I was concerned.”

“I asked [my fans], ‘Do you guys want the album or not?’ And, 99 percent of the response was, ‘Yes, drop that now. We need vibes, we need Colores.’ I knew it was time to give back and forget about competition and drop the music,” he expressed. “When you do things with your heart, they end up being amazing.”

Hear more in the video below.