It’s a BOY! Kate Ferdinand reveals she is having a son with husband Rio as she shares sweet snaps from gender reveal party

Kate Ferdinand has revealed she is having a baby boy with husband Rio.

Taking to Instagram on Wednesday, the former TOWIE star, 29, made the big announcement as she shared pictures from a gender reveal party held at their home in Bromley.

The reality starlet was seen hugging Rio, 41, beneath billowing streams of blue confetti as her stepchildren, Lorenz, 14, Tate, 11, and nine-year-old Tia, cheered. 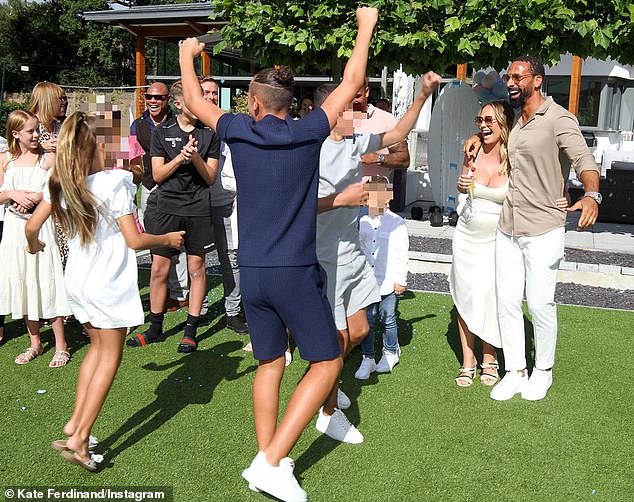 Sweet: Kate Ferdinand has revealed she is having a baby boy. The former TOWIE star, 29, made the big announcement as she shared pictures from a gender reveal party

Poking fun at the now male-heavy household, Kate captioned the shots: ‘….. it’s a boy me and tia are outnumbered’.

Rio shared the same snaps as he penned: ‘It’s a BOY!!! The Boys ruling this house #love’.

Kate looked radiant for the party as she sheathed her blossoming baby bump in a cream midi dress that clung to her pregnancy curves.

Rio also opted for a neutral ensemble as he paired a taupe shirt with white jeans. 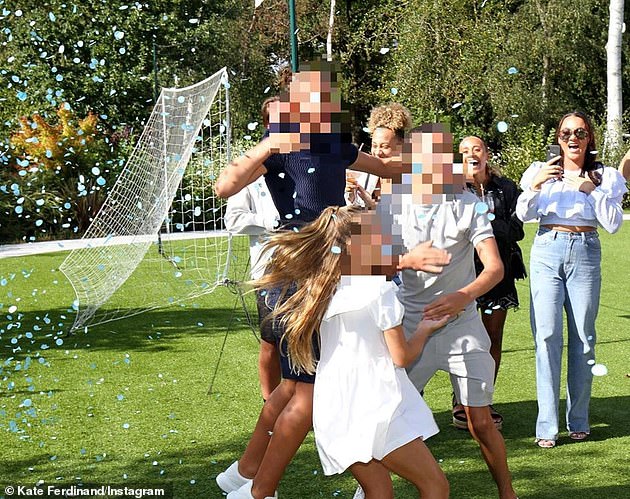 Family fun: The pair were seen in their garden hugging beneath billowing streams of blue confetti alongside Rio’s children from his first marriage: Lorenz, 14, Tate, 11, and Tia, nine 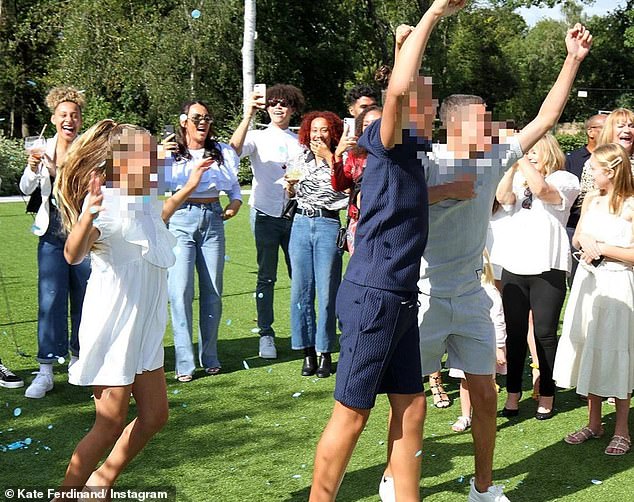 Celebrate! As well as the children, the pair were joined by a host of friends and family for the gender reveal party

The happy couple, who married last year, announced their pregnancy on June 18, when Kate took to Instagram to share a heart-warming video of the moment they told their kids.

Kate captioned the announcement with: ‘The crazy house is about to get a little bit crazier … every time I watch this it makes me cry, the best reaction. Baby Ferdy we are all so excited to meet you.’

Rio also posted the same clip and added: ‘We got our wish, another Ferdinand en route!! @xkateferdinand I can’t wait to go through this whole pregnancy together and then bring our little human into this world. The reaction though.’

In the video, the couple sat down Rio’s three children as they shared the news with them for the first time and filmed their reactions. 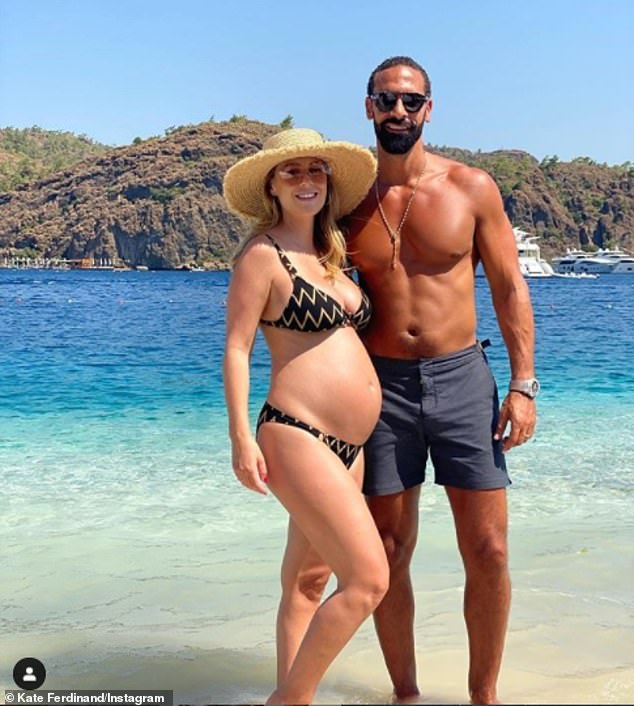 Sweet: The happy couple embarked on a relationship in 2017, married last year and announced they were expecting their first child together on June 18

The reality star embarked on a relationship with footballer Rio in 2017 and stepped back from TOWIE to become a mother figure for the trio, after his first wife, Rebecca, tragically passed away from breast cancer in 2015.

Rio proposed to Kate in November 2018 after almost two years of dating and the couple filmed a similar video to their baby announcement.

The former TOWIE star accepted a romantic rooftop proposal from the sports legend during a family holiday to Abu Dhabi.

He popped the question in front of his three children after the former footballer was given the blessing of his late wife Rebecca to find love again.

The gender reveal news come after it was claimed the couple have splashed out £40,000 on a pair of highly-trained dogs to protect their home.

The celebrity couple are said to want extra security at their mansion for their growing family.

They reportedly enlisted the help of a special protection dog company, Chaperone K9, to buy the pair of black German shepherds. 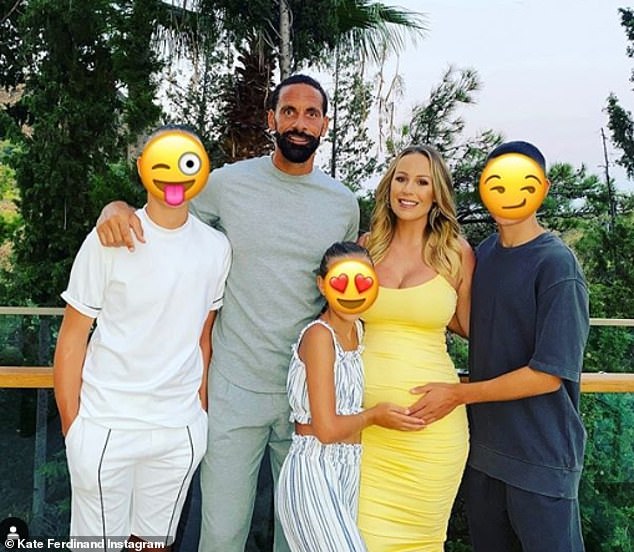 Stepmother: Kate stepped back from TOWIE to become a mother figure for the trio, after Rio’s first wife, Rebecca, tragically passed away from breast cancer in 2015

A source told The Sun: ‘One is already at their home, and the second will be joining shortly.

‘The couple already have a dog – Kate’s chihuahua – but Rio will enjoy walking these pair a lot more!

‘They are incredible family dogs and will protect them like nothing else – everyone has one these days and who can blame them after everything that’s happened with the other footballers. Rio is taking no chances!’ 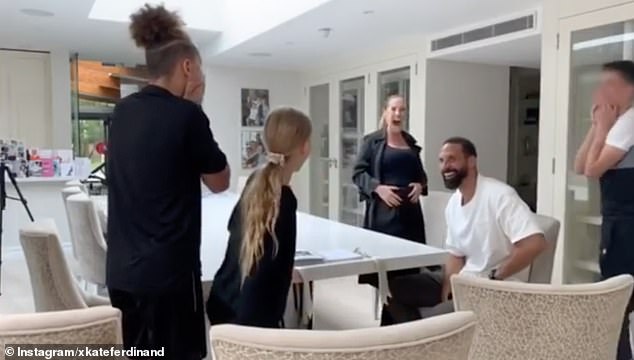 Oh baby! Kate announced that she is pregnant and expecting her first child with husband Rio in a sweet video that showed the pair telling their children