And Ireland Baldwin was seen going one step further on Tuesday when she stepped out to protest in Los Angeles.

The 24-year-old donned a white tank top with jeans during her solo outing. 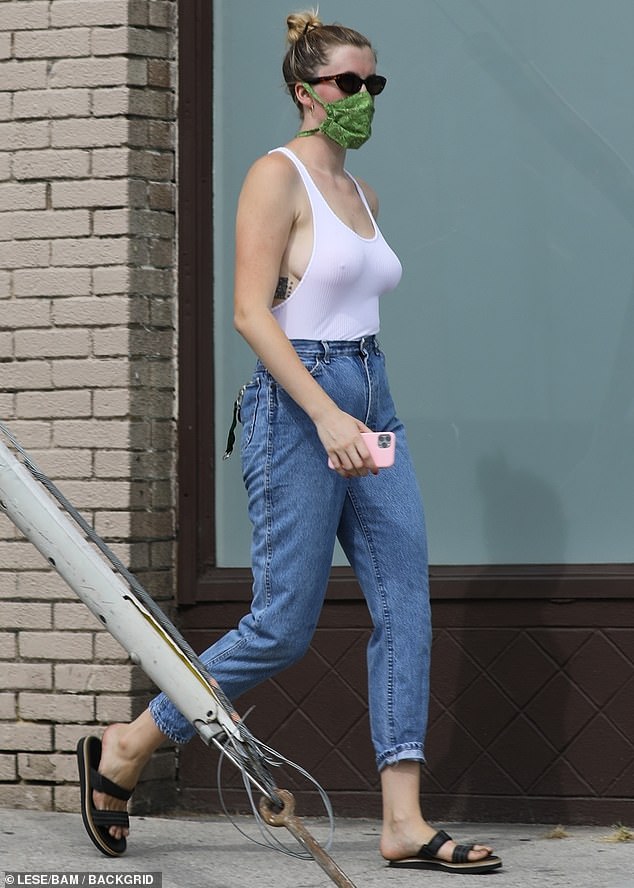 Protesting: Ireland Baldwin was spotted stepping out to join the protests around Los Angeles on Tuesday

Earlier, Ireland covered herself in a dark grey graphic hoodie and a pair of cropped mom jeans for the occasion.

She teamed the look with open-toed slides and accessorized with a pair of shades over her face.

The daughter of Alec Baldwin styled her light brown hair out naturally and appeared to be wearing very little to no makeup under a protective green mask. 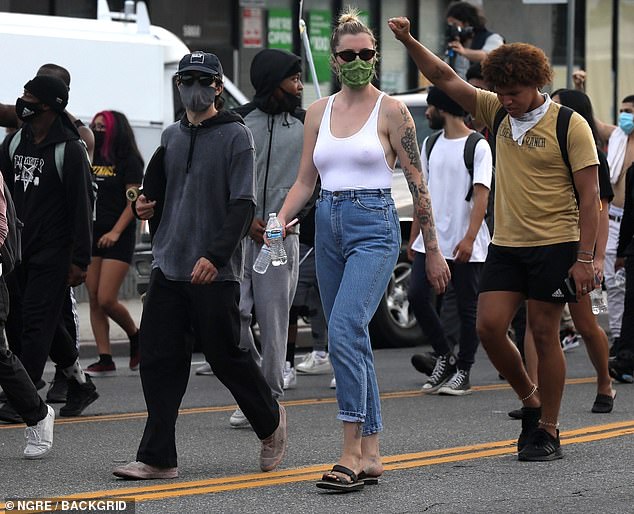 Standing up: Ireland seen attending a protest on Tuesday afternoon 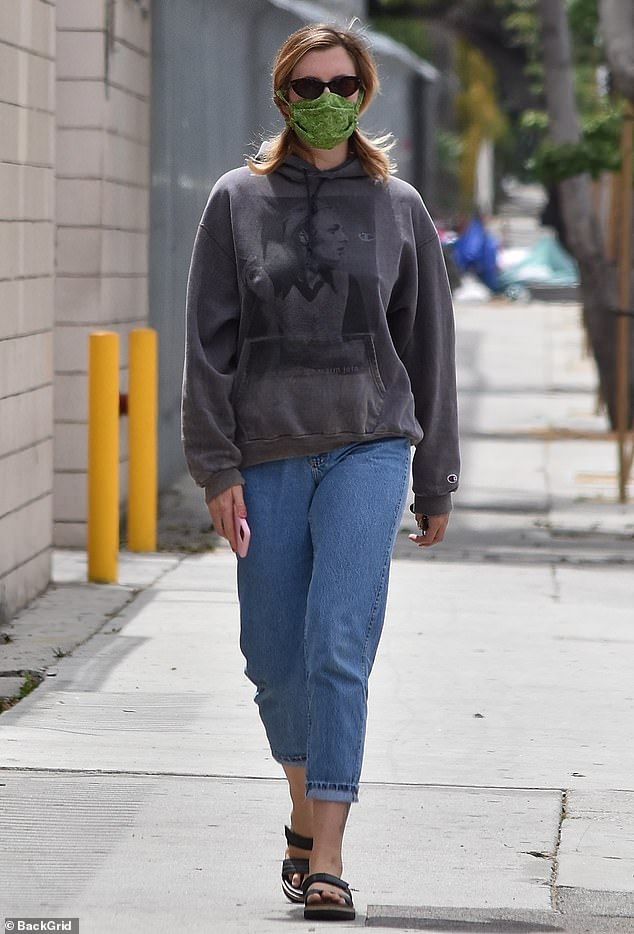 Bundled up: Before turning heads in her a tank top, she covered up in an over-sized grey hoodie 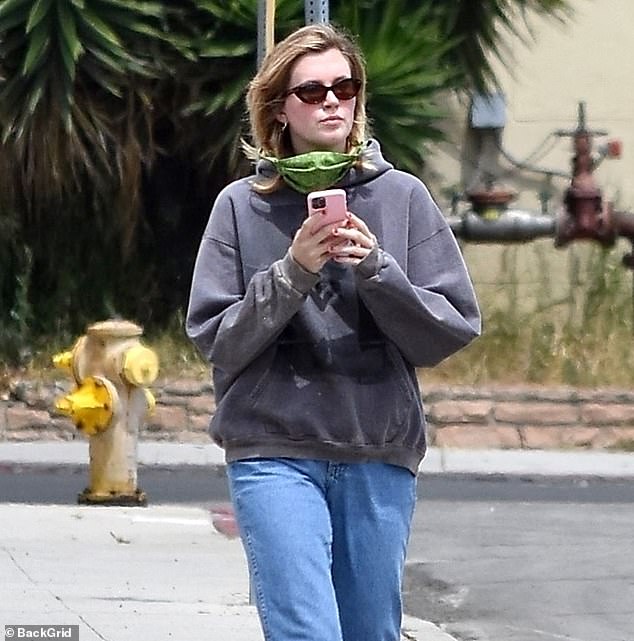 Casual: Ireland sported a dark grey graphic sweatshirt and a pair of cropped mom jeans for the occasion 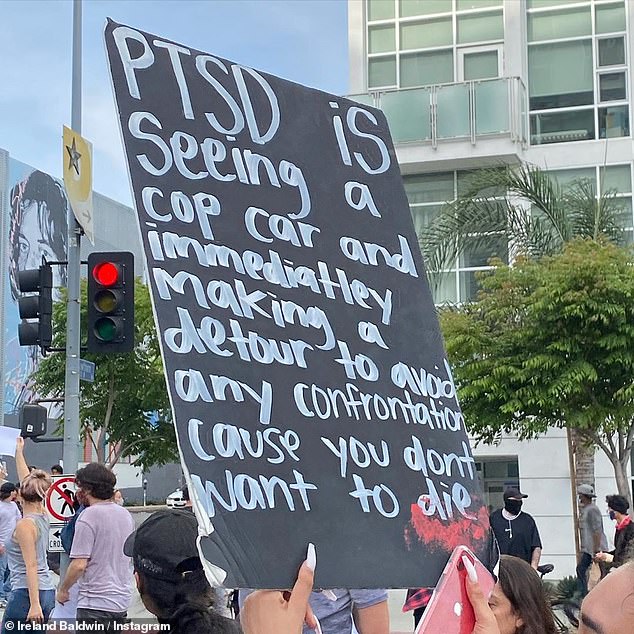 Heart-wrenching: She shared an emotional  protest sign, which read: ‘PTSD is seeing a cop car and immediately making a detour to avoid any confrontation cause you don’t want to die’ on her Instagram Story

Ireland later took to social media to share a video of the protest she attended.

‘LA showing up!! I love these people,’ she captioned the black and white clip.

The model cousin of Hailey Bieber has spent the past few days showing her support on social media for the Black Lives Matter movement. 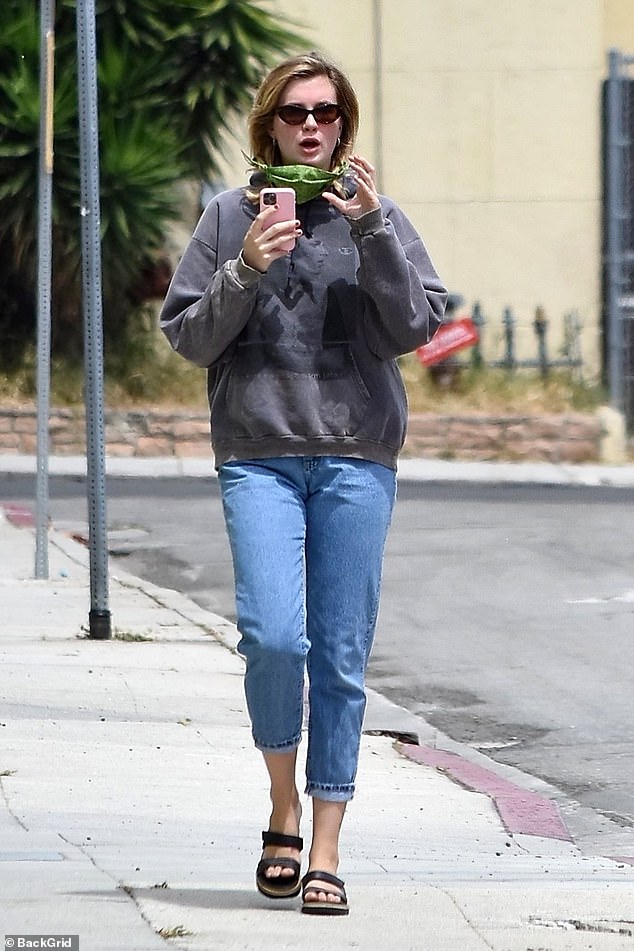 Protection: Ireland sported her mask for most of the outing and kept comfortable in flat slides 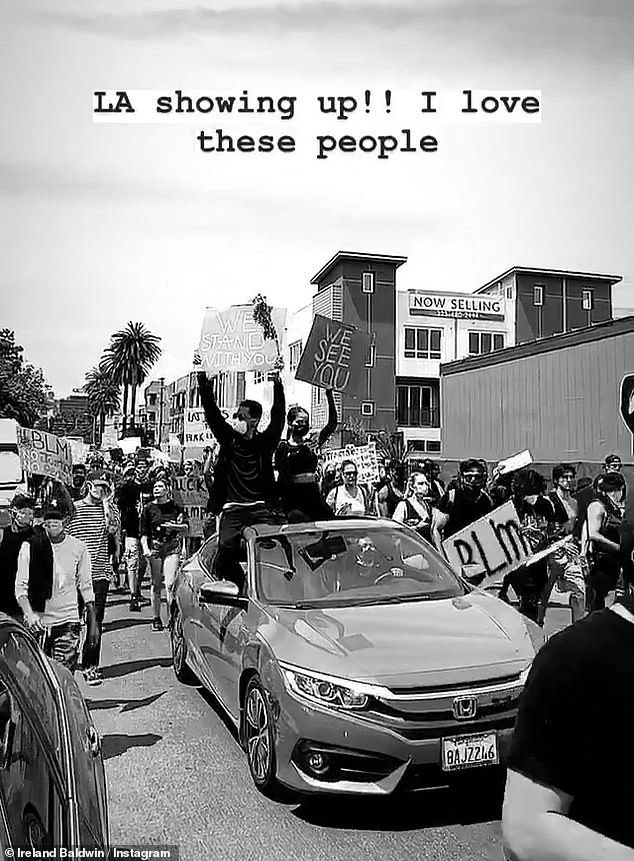 Vision: Ireland later took to social media to share a video of the protest she attended

Ireland’s past nine posts have all drawn attention to the racial injustices that the black community has faced.

Additionally, she shared a snap of a heart-wrenching protest sign, which read: ‘PTSD is seeing a cop car and immediately making a detour to avoid any confrontation cause you don’t want to die.’ 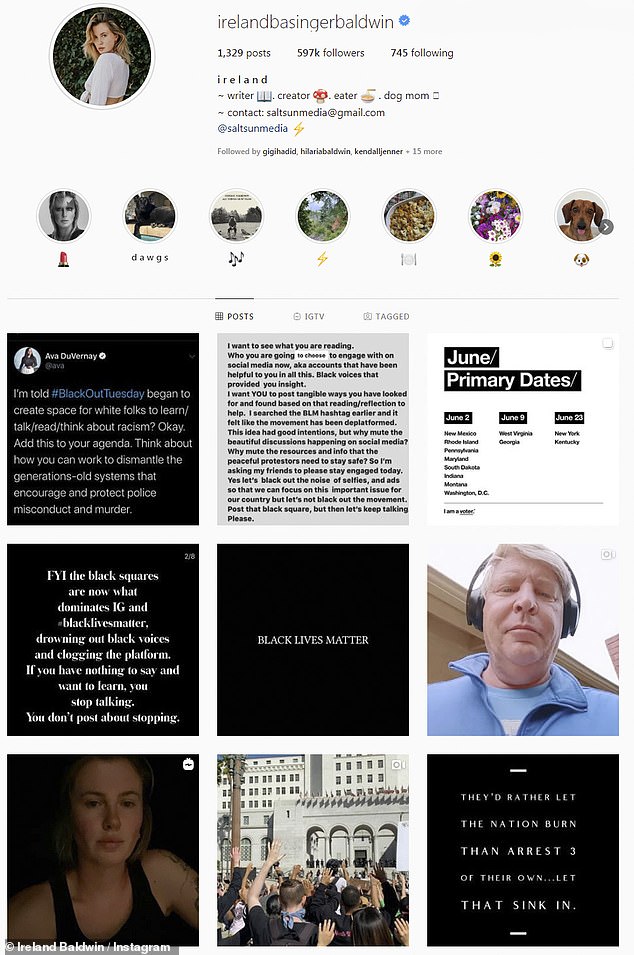 Taking a stance: Ireland’s past nine posts have all drawn attention to the racial injustices that the black community has faced

While Ireland was out demonstrating, her father Alec was slammed after a flippant remark downplaying the importance of #BlackoutTuesday in an effort to bring awareness to the group Black Lives Matter and their multimedia power.

Further complicating issues was that he was interviewing Woody Allen on his Here’s The Thing podcast, as the Oscar-winning director is considered a pariah by many some two and a half years after the #MeToo movement exposed decades of sexual misconduct in show business.

Baldwin downplayed the observance when replying to posts questioning why he would welcome on the Annie Hall director, whose estranged adopted daughter with ex-Mia Farrow, Dylan Farrow, accused him of molesting her when she was seven in 1992.

‘As for the perceived lack of sensitivity re BlackOutTuesday, I had no idea about this…national day of whatever,’ said Baldwin, who has past collaborated with Allen on films such as Alice, Blue Jasmine and To Rome with Love. 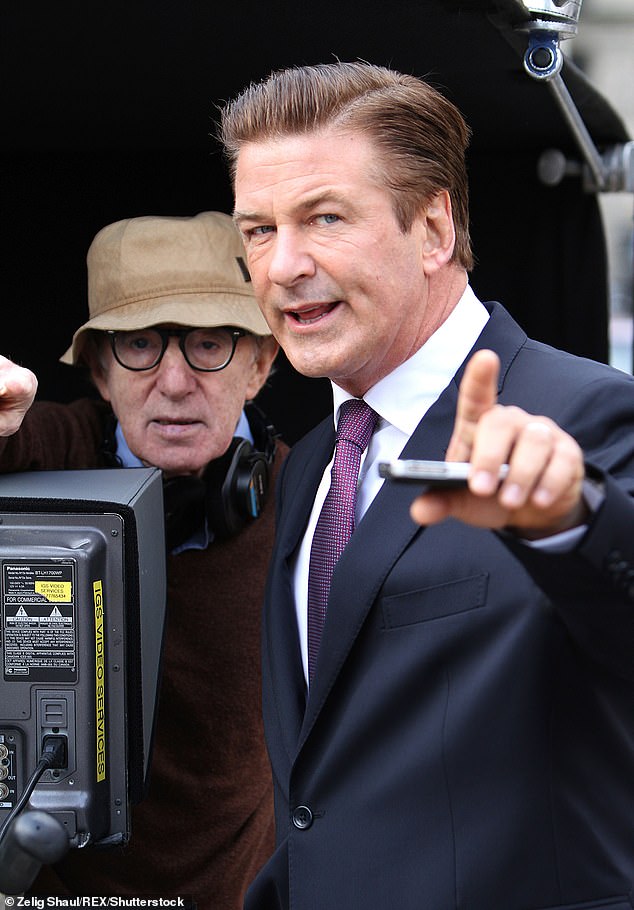 Response: Alec said the didn’t think the social media blackout was effective and that he believes Allen is innocent. The director and actor were snapped in 2012 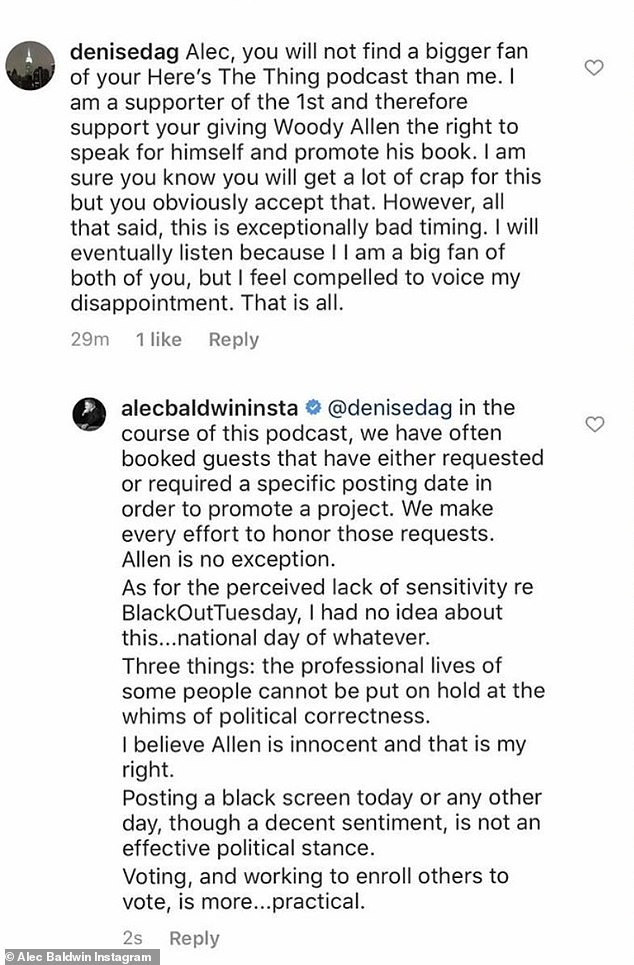 His take: The Departed actor explained his side of why he felt it was appropriate to welcome Allen on his program Tuesday

In his direct fashion, the Glengarry Glen Ross star delivered his view on the planned observance – and why he didn’t feel the need to observe it.

‘Three things: the professional lives of some people cannot be put on hold at the whims of political correctness,’ said Baldwin, who’s best known in recent years for playing President Donald Trump on Saturday Night Live. ‘I believe Allen is innocent and that is my right.

‘Posting a black screen today or any other day, though a decent sentiment, is not an effective political stance.’

Ireland later took to social media to defending her father – who’s generally been an outspoken voice on the left in his political stances – ‘because [she knows] his intentions and where his heart is at.’