I’m A Celebrity… Get Me Out Of Here! FIRST LOOK: Terrified Olivia Attwood JUMPS out of a helicopter while her fellow campmates take on brutal Walk The Plank trial in action-packed launch show

The much-anticipated new series of I’m A Celebrity…Get Me Out Of Here! returns to Australia with one of the largest and most elaborate entrances to the Jungle camp to date.

In scenes that will air during Sunday’s launch show, ten celebrities will be whisked away from their lives of luxury as their journey to the jungle begins with three terrifying challenges.

Leaving their plush pads and comforts far behind, the 10 celebrity campers will spend up to three weeks taking on a record 24 gruelling trails in the harsh surroundings of the Australian bush. 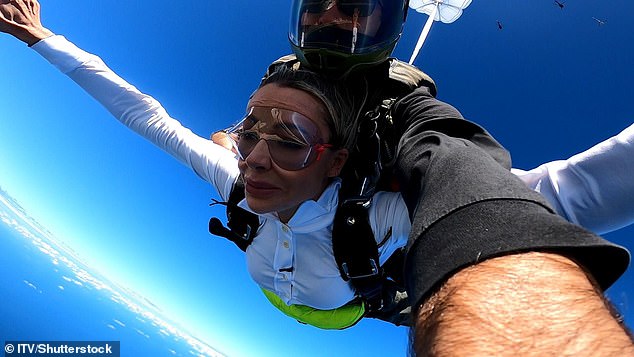 Back with a bang: The much-anticipated new series of I’m A Celebrity…Get Me Out Of Here! returns to Australia with one of the largest and most elaborate entrances to the Jungle camp to date

Kicking off the series in style, five celebrities turn up in luxury cars to a stunning waterside villa in the sun-drenched Gold Coast.

Hosts Ant and Dec appeared smug as they arrived in style to greet this year’s 10 celebrity campmates.

After the arrival, the celebrities learn that the public have been voting to name Jungle VIPs and who they want to see have the toughest journey into camp and face the first trial. 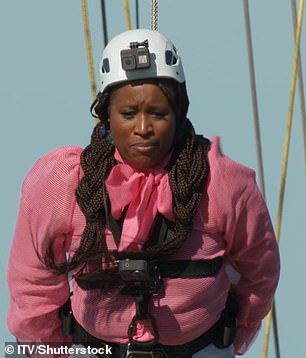 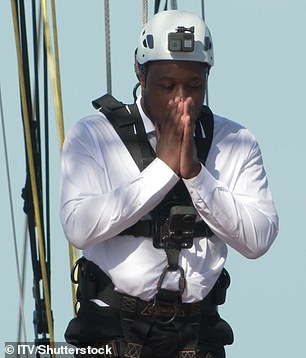 Scary: In scenes that will air during Sunday’s launch show, ten celebrities will be whisked away from their lives of luxury as their journey to the Jungle begins with three terrifying challenges 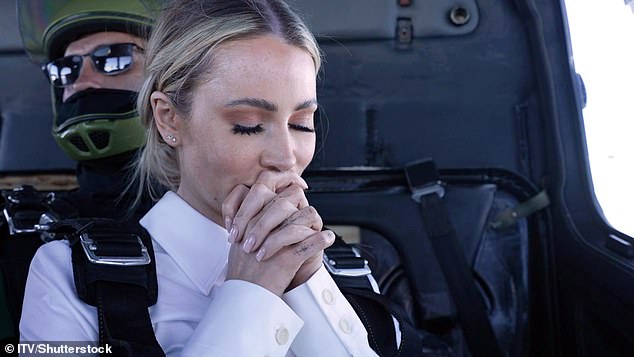 Thill-seeker: Olivia looked nervous as her terrifying journey to the jungle begun 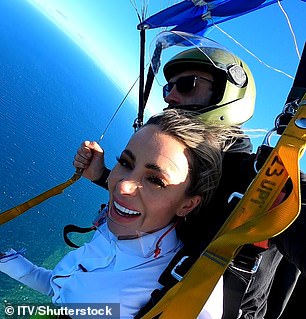 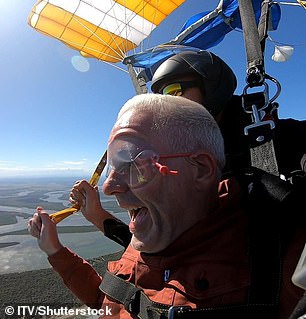 Brave: Olivia and Chris face the ultimate skydive entrance as they are forced to jump out of a chopper and into the jungle

Three celebrities, Babatúndé, Jill and Charlene, then travel to the iconic Focus building in Australia’s Surfers Paradise for the infamous plank challenge – with a twist.

Now branded as The Ledge, the campmates must walk to the edge of the plank and once all in position, take a step forward onto the ledge so they are leaning forward and facing down the jaw-dropping 334 foot drop to the ground.

Here they have to hold the position for one full minute. At the end of the 60 seconds they must let go of the rope that supports them and plunge from their perch in order to each win a coveted star.

Comedian Babatúndé was unable to confront his fear of heights and was unable to take part in the Walk The Plank trial which traditionally kicks off the series. 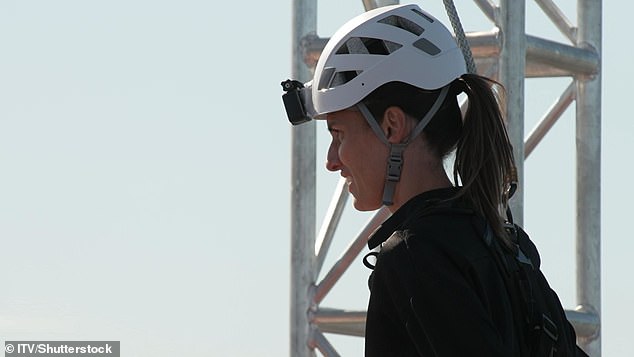 Terrifying: Three celebrities, Babatúndé, Jill and Charlene, then travel to the iconic Focus building in Australia’s Surfers Paradise for the infamous plank challenge 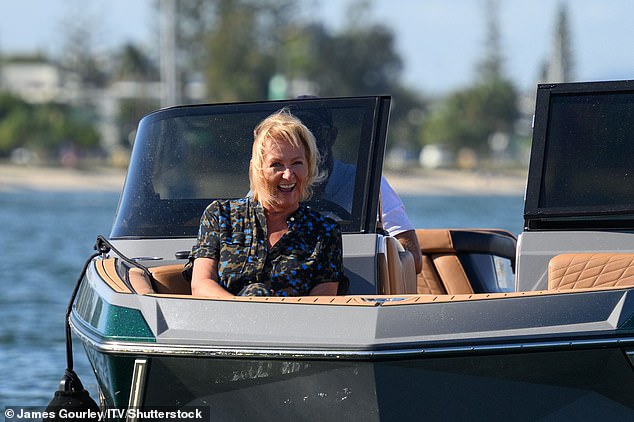 Luxury: A group of celebrities arrived by boat at a glistening marina before taking on the gruelling challenged 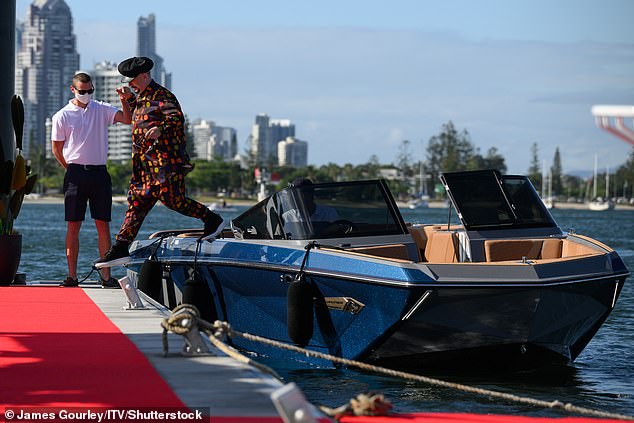 Journey: After the arrival, the celebrities learn that the public have been voting to name Jungle VIPs and who they want to see have the toughest journey into camp and face the first trial

Elsewhere, Olivia and Chris face the ultimate skydive entrance as they are forced to jump out of a chopper and into the jungle.

The rest of the campmates, Mike, Sue and Owen, are set to face a boat trip like no other into camp.

The three stars are locked onto the mast of a boat, dubbed the Critter Cruise – with each celebrity having to undertake a challenge to unlock each other.

Mike must get into the water and pop up inside an upturned boat and inside he finds letters that correlate to numbers, leaving him with a code to crack. 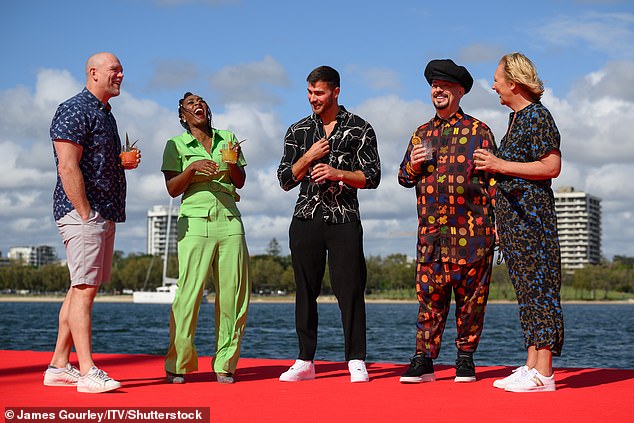 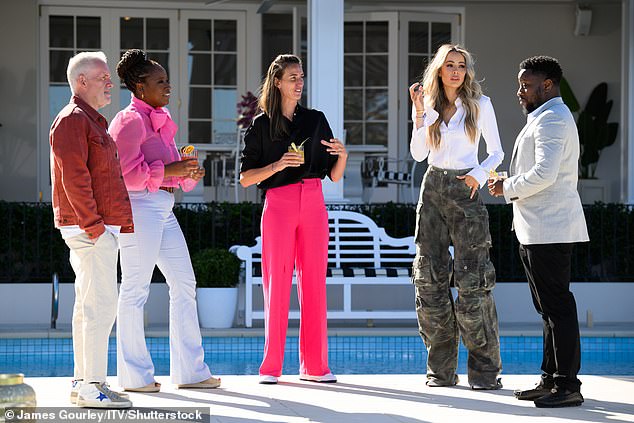 Inside, she must search out the fish eyes, ount them up and she’ll earn her code to open her padlock.

Lastly, Owen must take on a pipe that is blocked and is faced to ignore the bugs and grime in order to remove the bolts and unlock the grate. 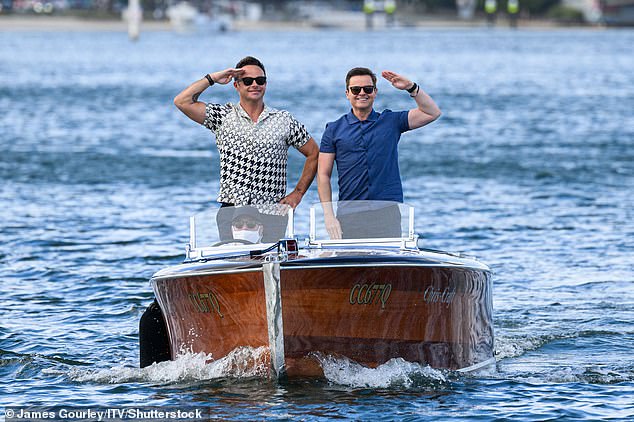 Bold entrance: Hosts Ant and Dec appeared smug as they arrived in style to greet this year’s 10 celebrity campmates 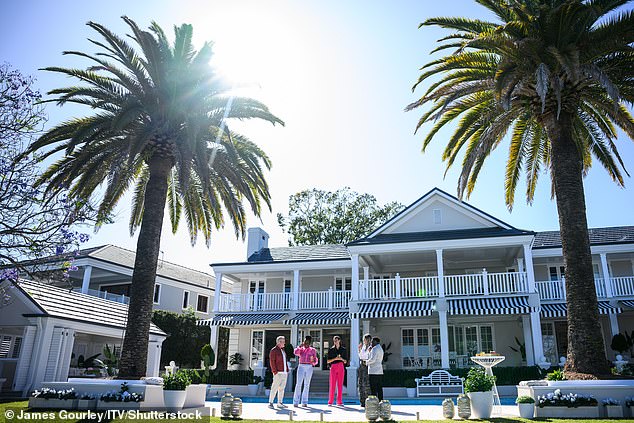 Lavish: Kicking off the series in style, five celebrities turn up in luxury cars to a stunning waterside villa in the sun-drenched Gold Coast

It was revealed on Tuesday that Matt Hancock is also heading to the Australian jungle as a surprise late arrival.

The MP, who quit as Health Secretary after cheating on his wife during the pandemic with long-term aide Gina Coladangelo, will become the 12th celebrity heading Down Under.

After playing a central role in coordinating the government’s response to Covid, Mr Hancock’s political career has flagged of late, and last week he was snubbed by Rishi Sunak after the new PM dodged his attempt at a greeting outside Tory HQ.

He becomes the latest in a long list of political figures to try their luck on the ITV reality show, including MPs Nadine Dorries and Lembit Opik, and Boris Johnson’s father, Stanley 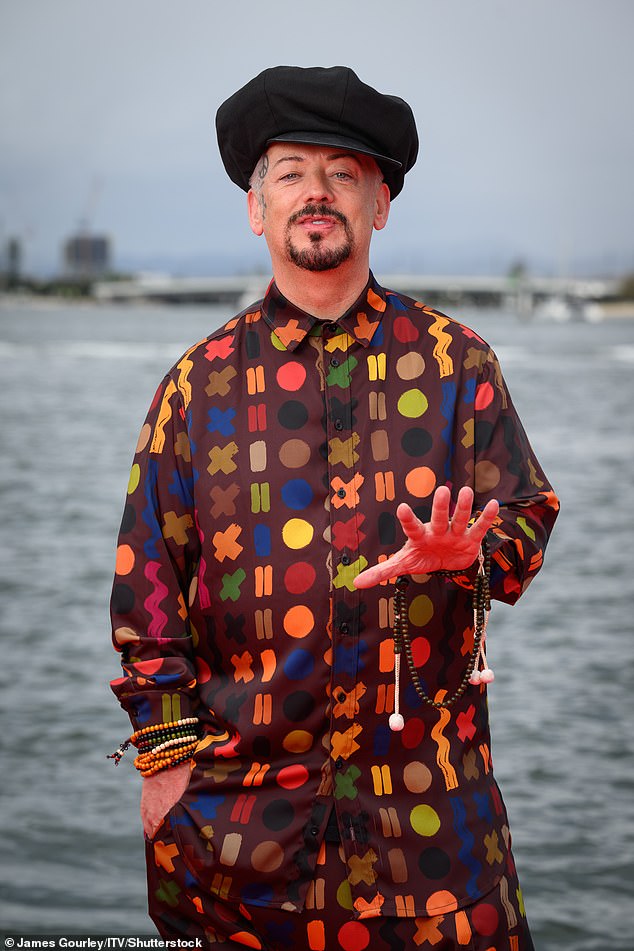 Looking good: Boy George showed off his bold style in a colourful patterned shirt and trouser co-ord and a cap

Stunning: Olivia looked incredible after undergoing thousands of pounds worth of beauty treatments before arriving in the jungle 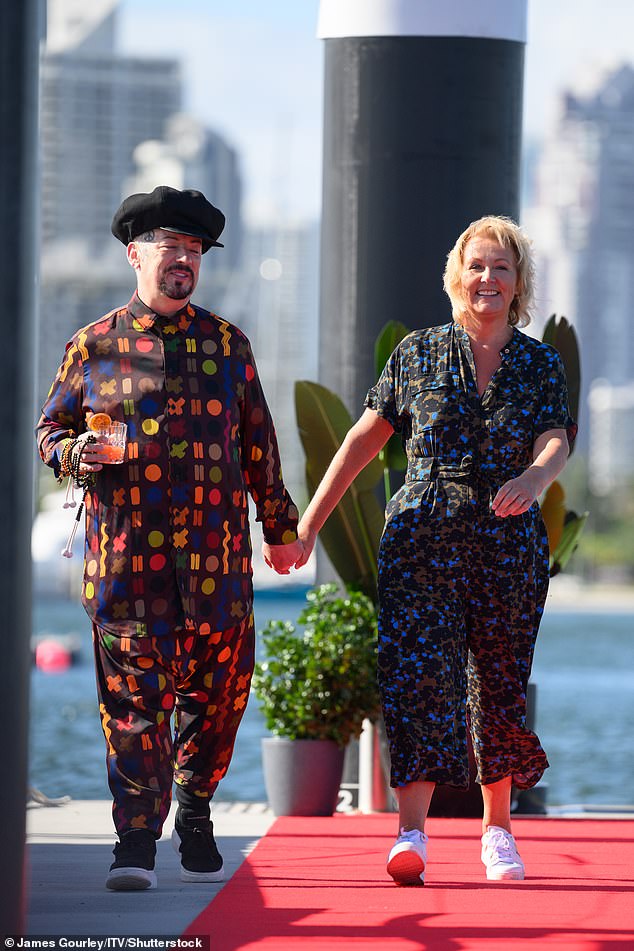 Supportive: Boy George and Sue Cleaver walked hand-in-hand on the pier, ready to start the journey together 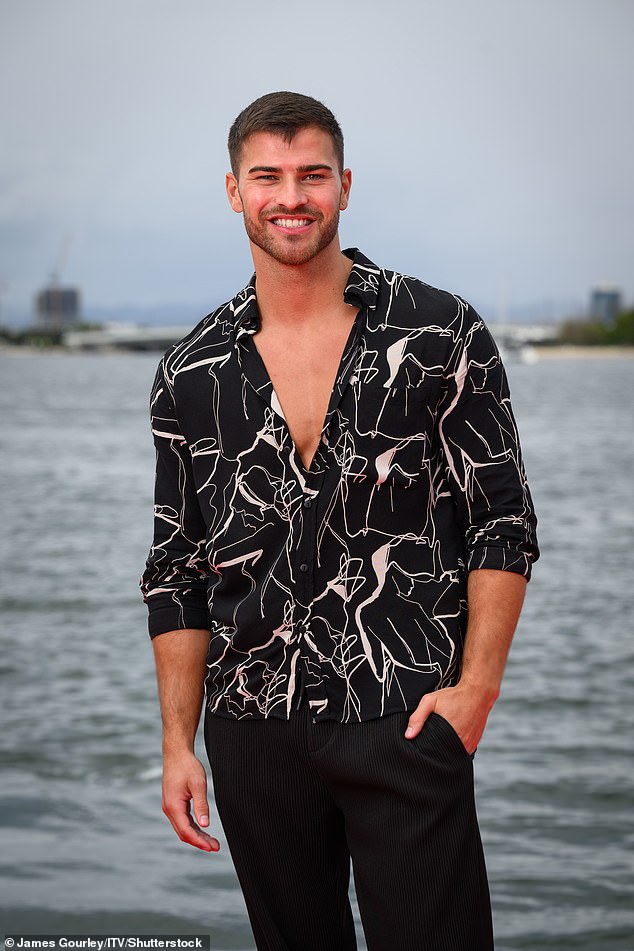 Dashing: Owen Warner cut a dapper figure in a black shirt and trousers after saying he was ‘looking for love’ in the jungle

ITV bosses have confirmed to MailOnline that this year’s show, which returns to Australia for the first time in two years following the global pandemic on Sunday, will be the toughest ever for celebrities – with 24 trials to face in 21 shows.

Speaking from the Australian jungle, executive producer, Olly Nash, said: ‘We are filming more than we’ve ever done before and there will be more elements over more shows.

‘In Wales we couldn’t really do stuff that was outside because of the weather and the big storm but this year we can be outside again.

‘On the last day the final three each take on a trial. Cyclone is absolutely back.’

I’m A Celebrity begins on Sunday, November 6 2022 at 9pm with a 105 minute special. It will then air every night of the week and both weekend nights after the launch – all at 9pm. 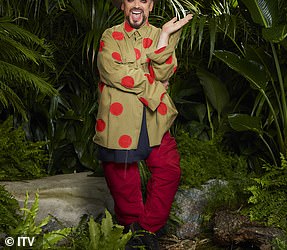 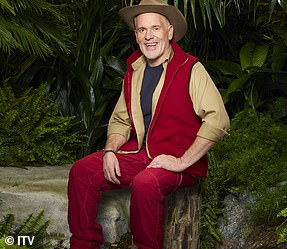 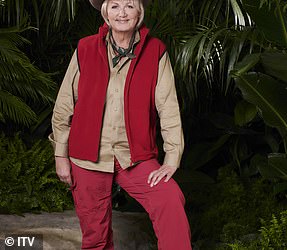 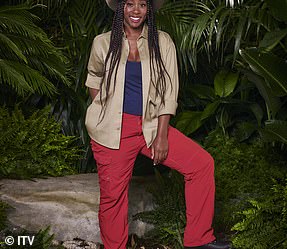 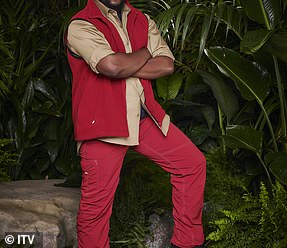 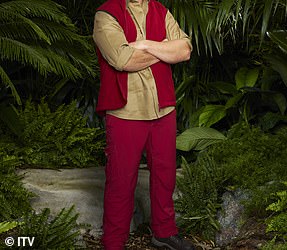 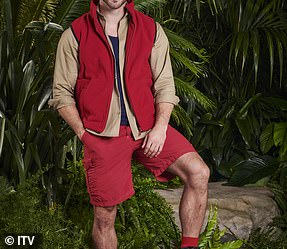 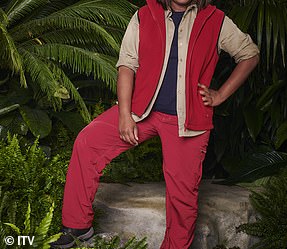 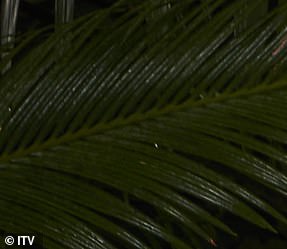 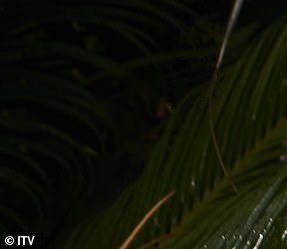