I’m A Celebrity’s Jacqueline Jossa passionately kisses husband Dan Osborne as they reunite following those cheating rumours… (but WHY did she turn down post-jungle interviews hours later?)

Jacqueline Jossa and Dan Osborne looked incredibly loved up when they reunited after she was crowned jungle queen on I’m A Celebrity on Sunday evening.

The former EastEnders actress, 27, beat Corrie’s Andy Whyment to be given the winner’s title after taking on gruelling final Bushtucker trials which saw Jacqueline hold a huntsman spider in her mouth and Andy, 38, eat a camel’s hoof.

But despite weeks of reports of cheating claims made against Dan, 28, amid rumours that Myles Stephenson, 28, had told Jacqueline that Gabby Allen, 25, did have a fling with her husband, all appeared well between them.

But hours later, Lorraine Kelly said on ITV that she had decided to decline post-jungle interviews on Monday, despite all other campmates taking part after leaving the jungle. 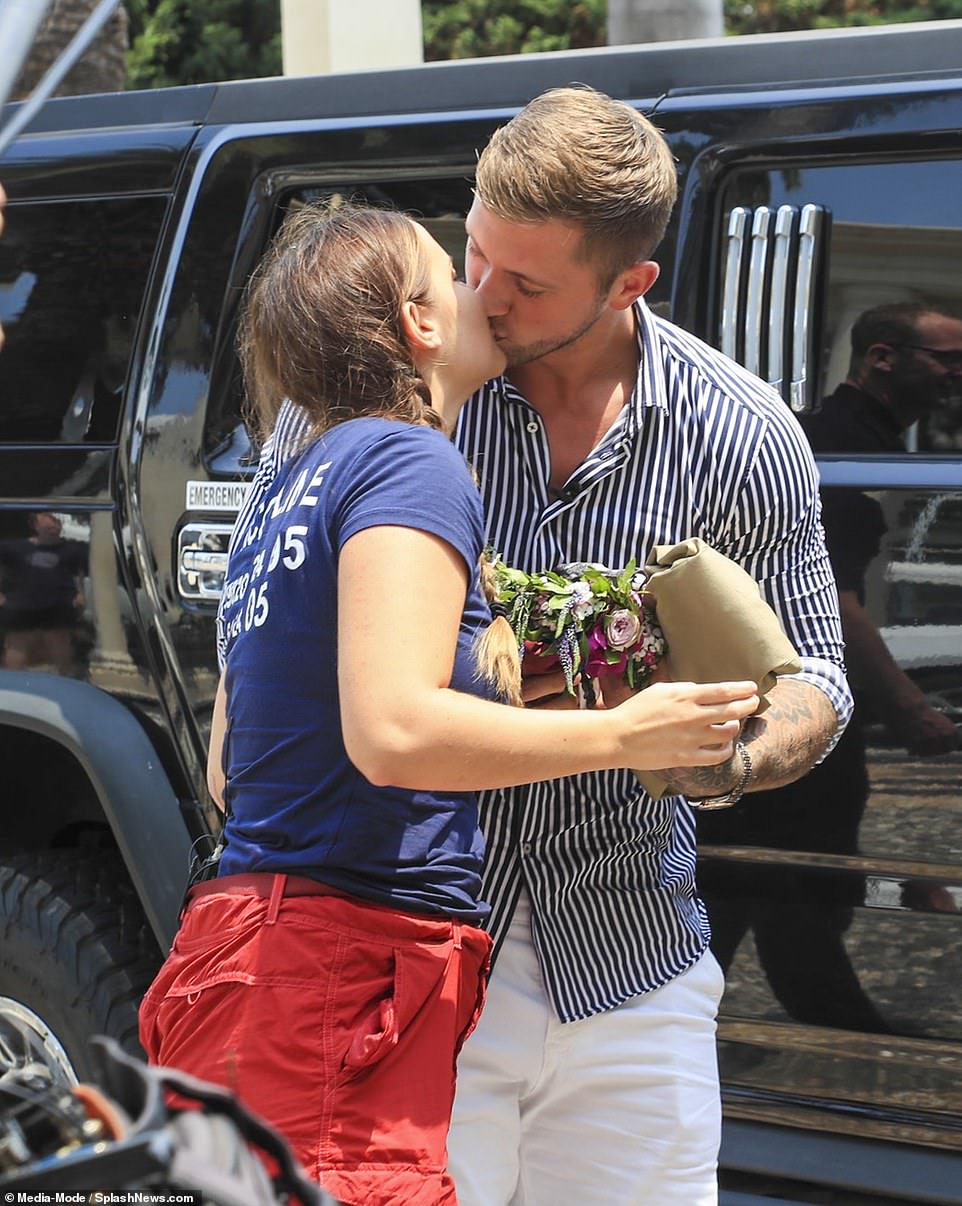 Back together: I’m A Celebrity’s Jacqueline Jossa passionately kissed husband Dan Osborne on Sunday as the jungle queen reunited with him and their children following those cheating rumours 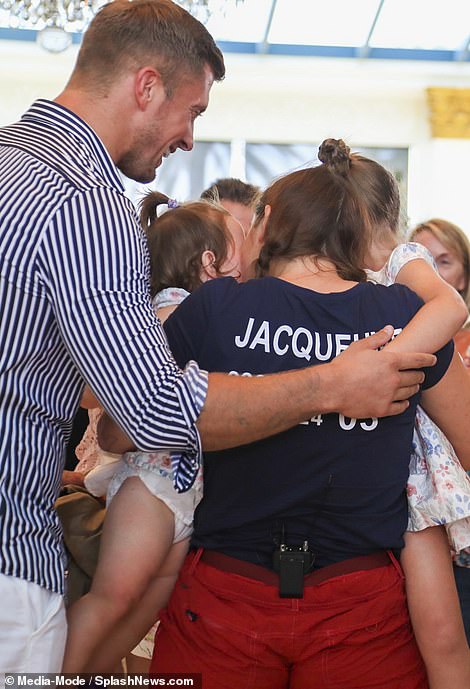 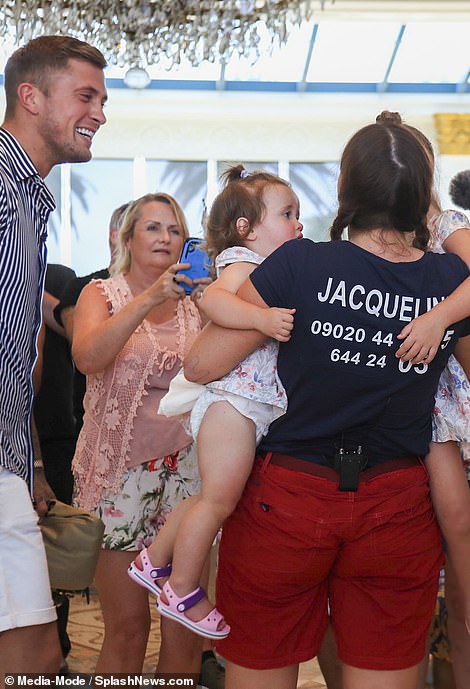 Sweet love: Jacqueline swept up her children in her arms, while Dan placed his arm around her

Jacqueline and Dan looked very loved up as they arrived back at the Versace Palazzo hotel after the show’s final, with Dan looking thrilled to have his wife back.

She had spoken of her love for him during her final speech, saying ‘I love Daniel, I love my kids, I love my family.’

Still dressed in her jungle clothing, she and Dan were greeted by their children and the rest of the campmates and no doubt Jacqueline’s mother and father who had come to help out with the children. 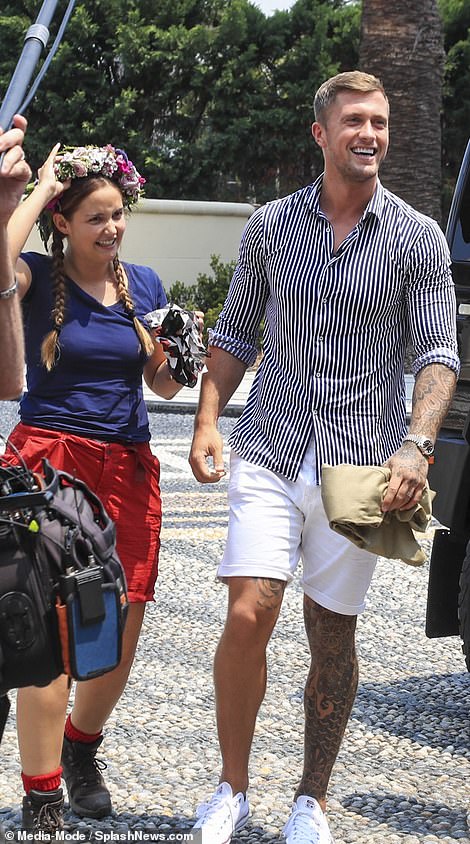 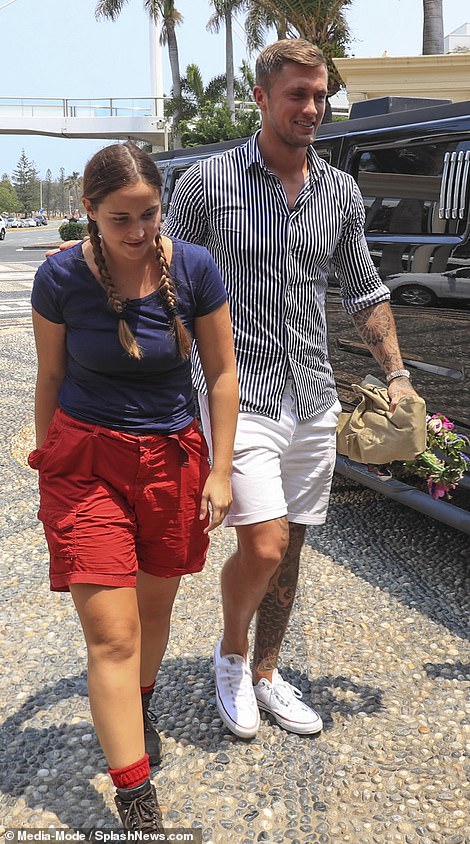 Happy: Jacqueline held onto her crown as she arrived back to a hero’s welcome at the hotel, but it was unclear if she had been made aware of the claims made against Dan while she was in the jungle 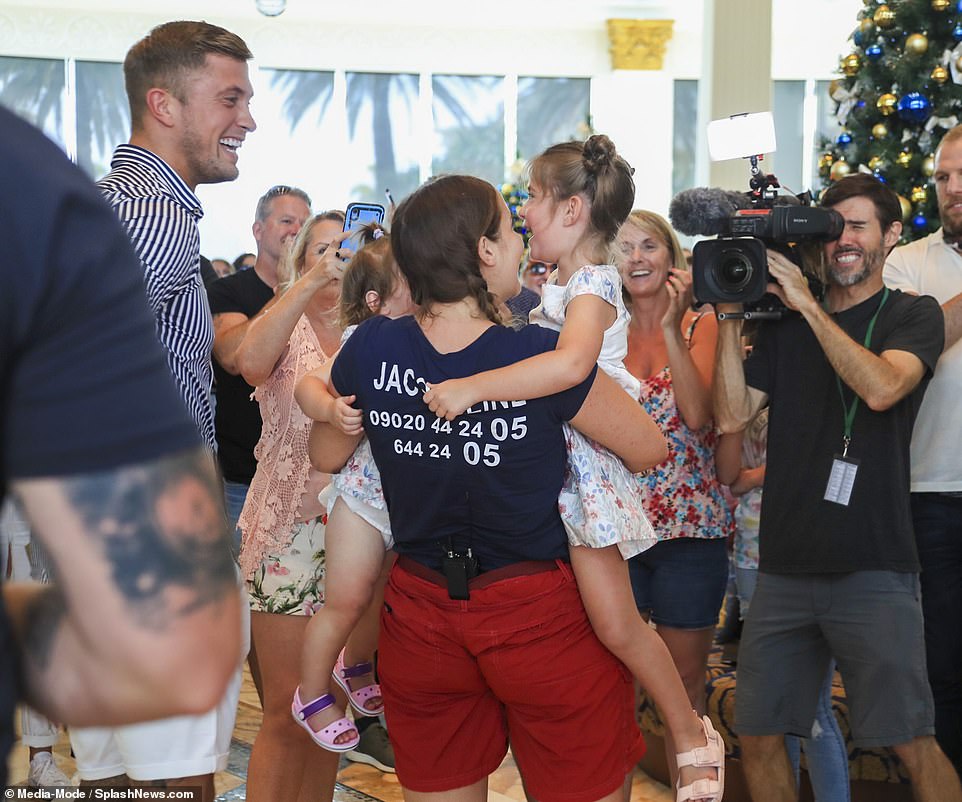 Back in her arms: Jacqueline scooped up Mia and Ella in her arms after no doubt missing them so much 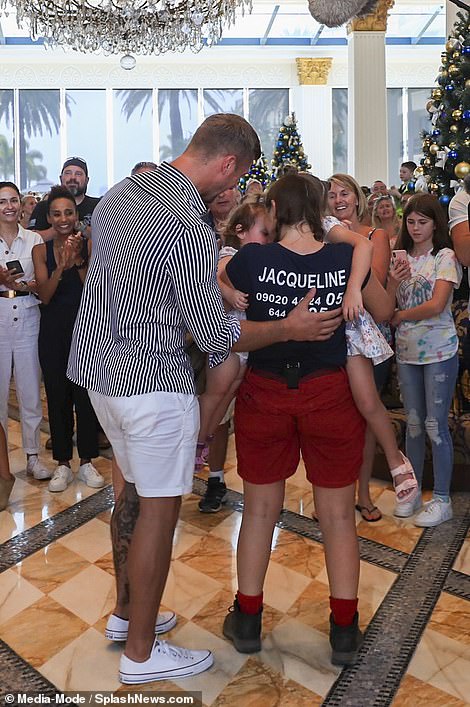 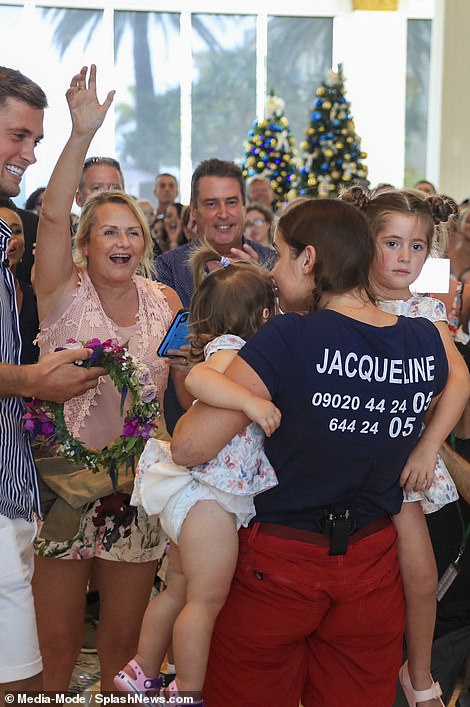 A true champion: Jacqueline had said that overcoming her fears had given her her confidence back 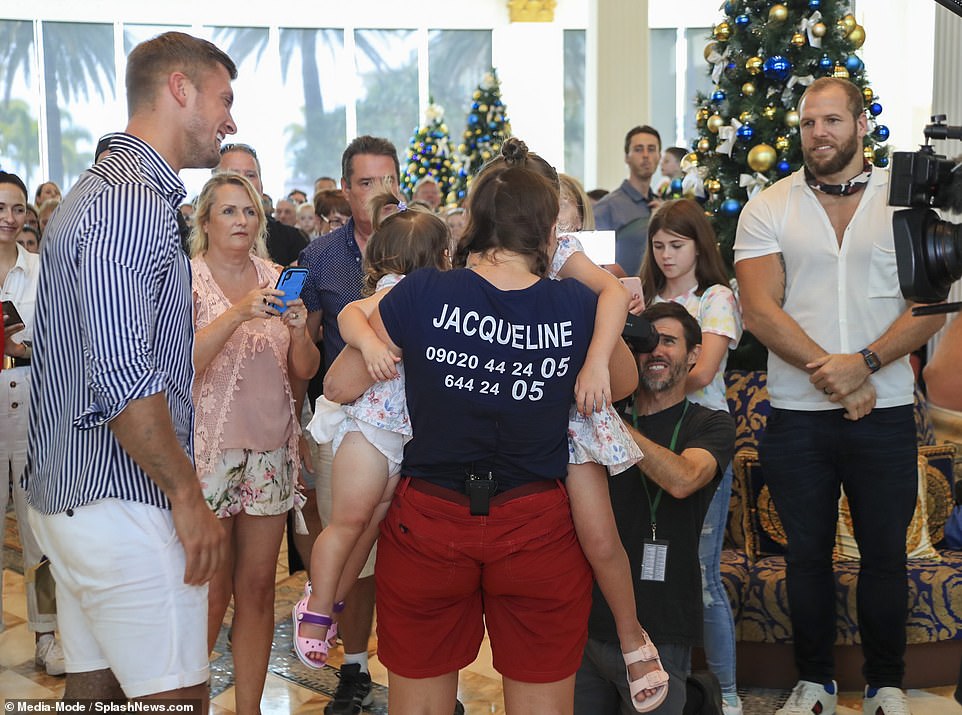 Where is he? There was no sign of Myles in the crowd who had taken Jacqueline to one side in the jungle and spoke to her about claims his ex Gabby Allen did have a fling with Daniel

Dan, dressed in a smart blue striped shirt had his arm constantly around his wife after weeks of denying any sort of cheating claims, taking to Instagram stories to protest his innocence.

Dan hit back on social media soon after and said the girls had ‘no morals.’ 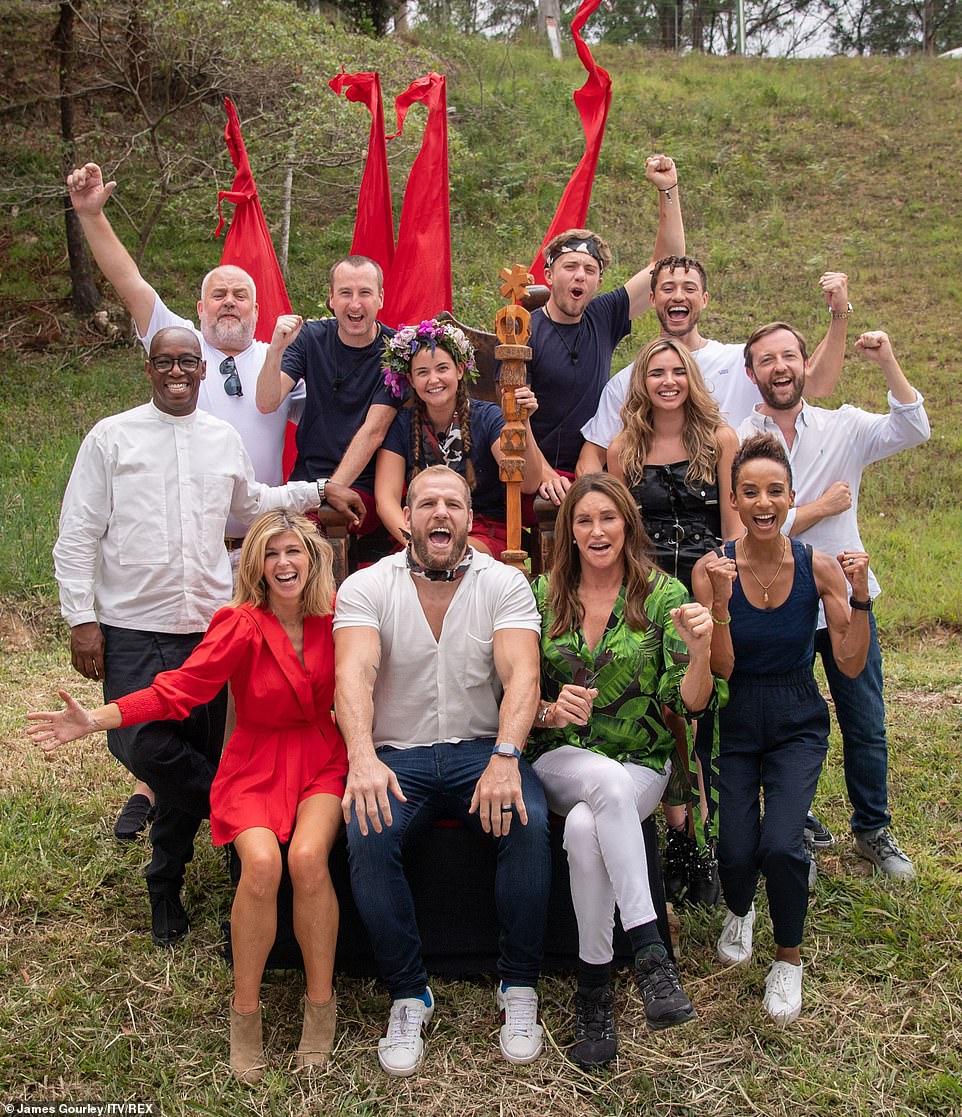 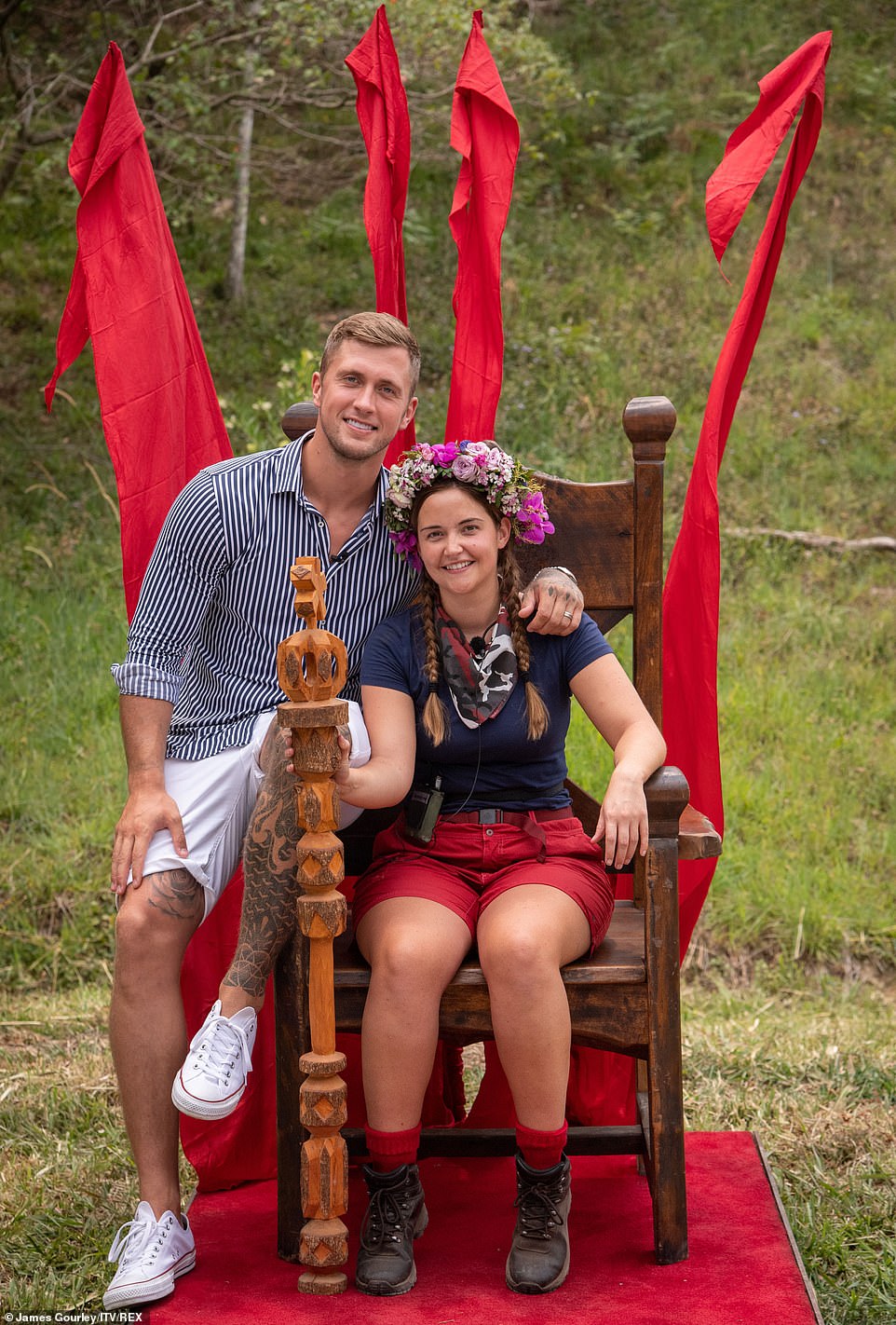 Winner: Jacqueline posed for snaps with Dan shortly after winning the show 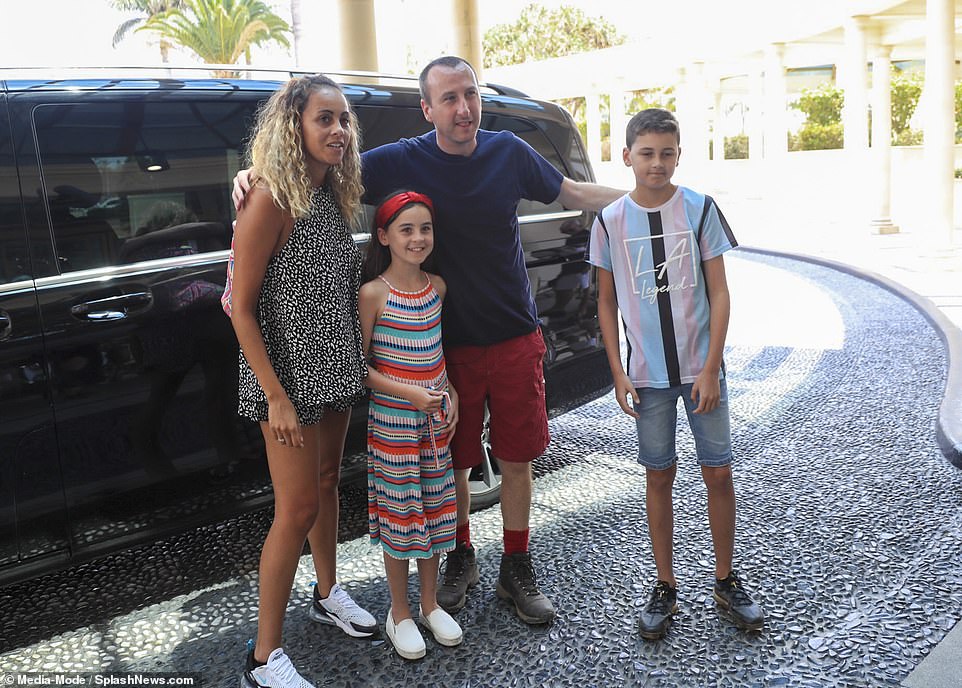 Runner up: Andy Whyment was also pictured arriving back with his wife Nicola and their children 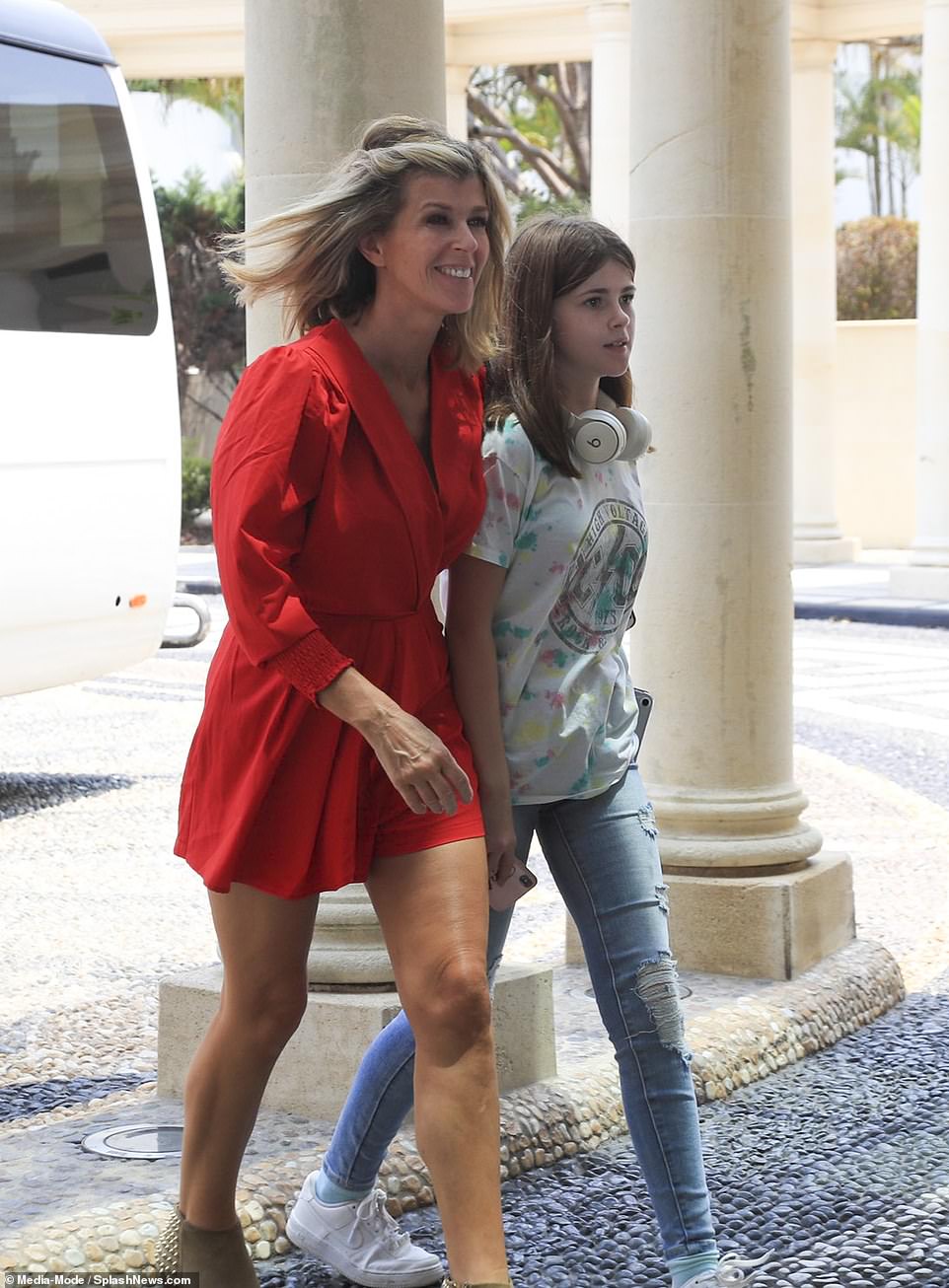 Hot to trot: Kate Garraway looked incredible with her daughter as she arrived wearing a very sexy red jumpsuit 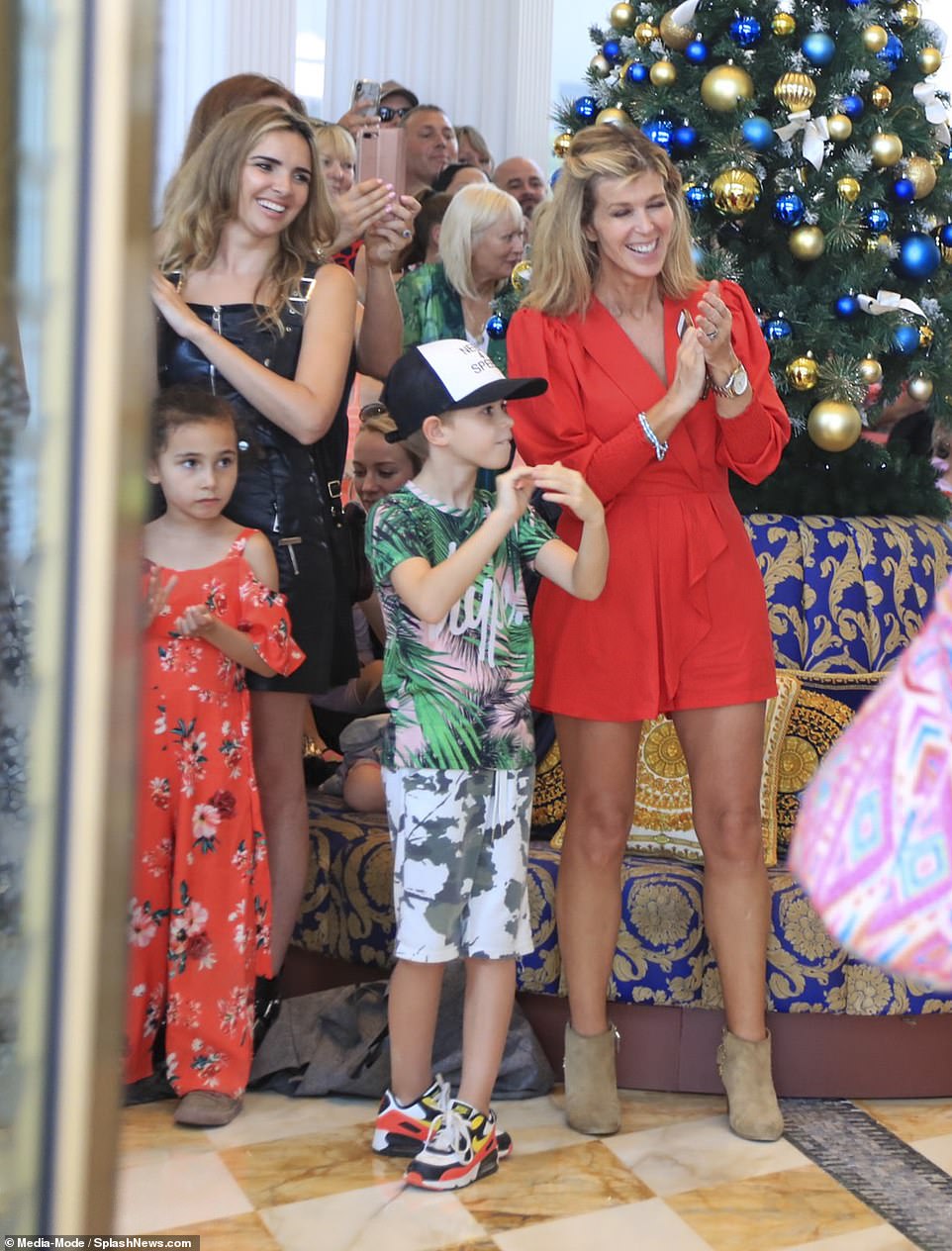 Good times: Everyone appeared in high spirits as they congratulated Jacqueline on her win

Meanwhile, Jacqueline made an incredible speech after winning the show about how taking part had given her confidence.

She said she spends her life ‘trying to change trolls’ minds’ about what they think of her but that she had completely just been herself on the show.

Andy reassured her that ‘people love her for her’ and she said that having the constant encouragement of the other campmates on the show had made her realise she could confront her fears. 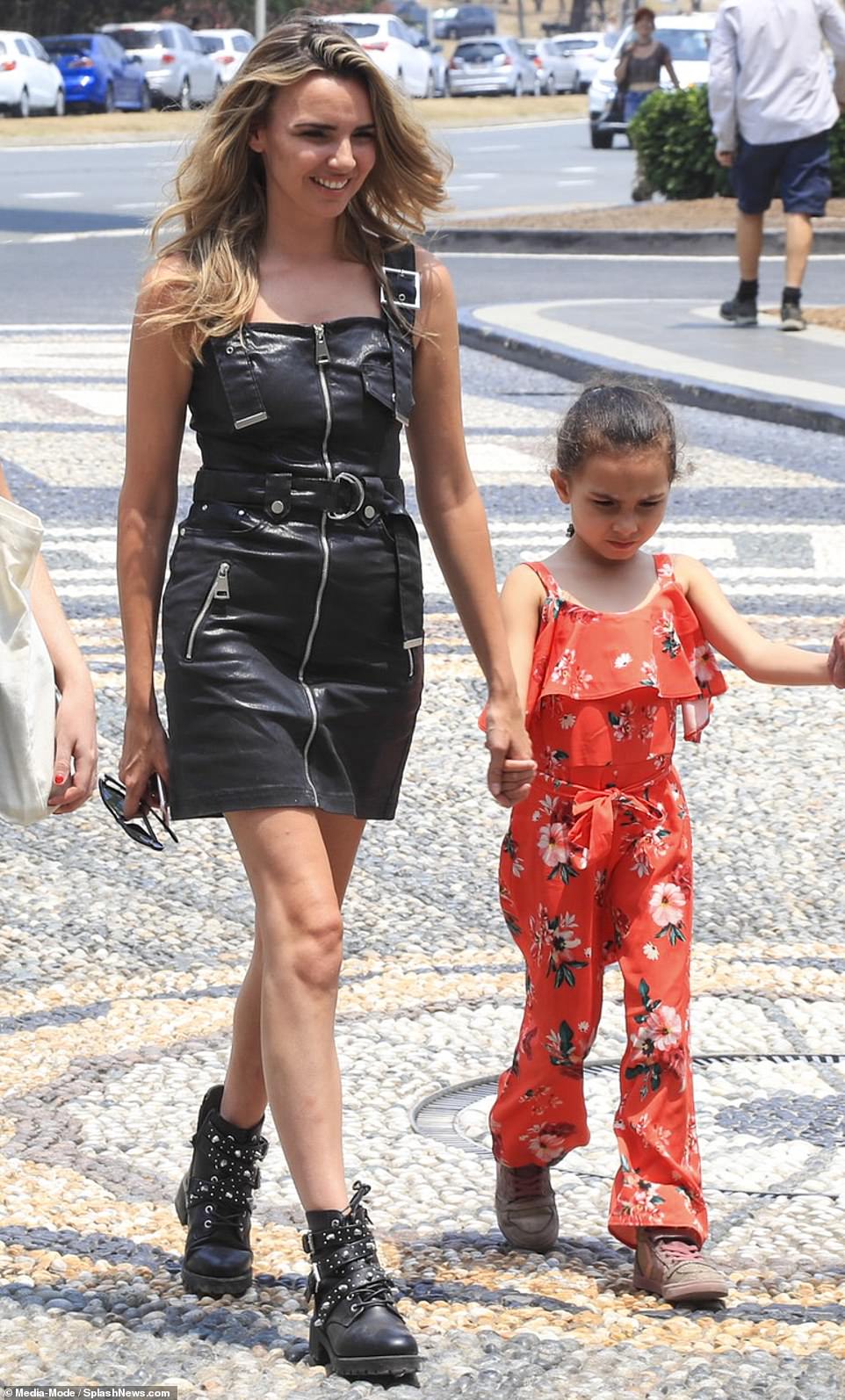 Hell for leather: Nadine Coyle wore a very sexy leather ensemble as she headed inside with her daughter Anaiya 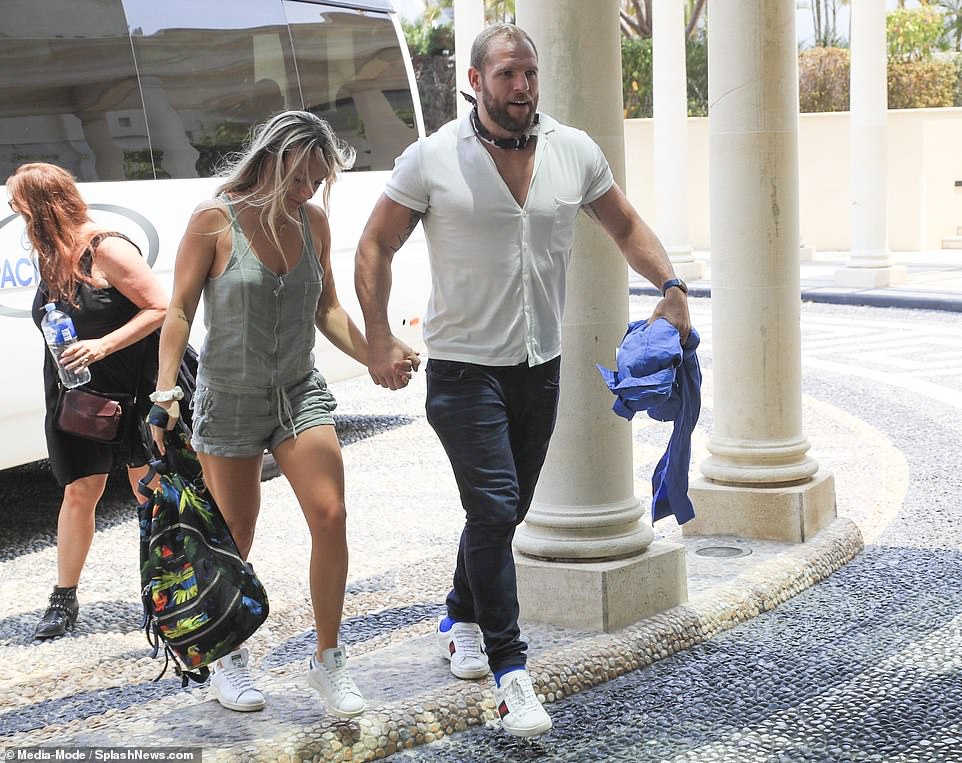 Holding hands: Chloe Madeley and James Haskell also looked close as they joined the party after claims of that sex marathon 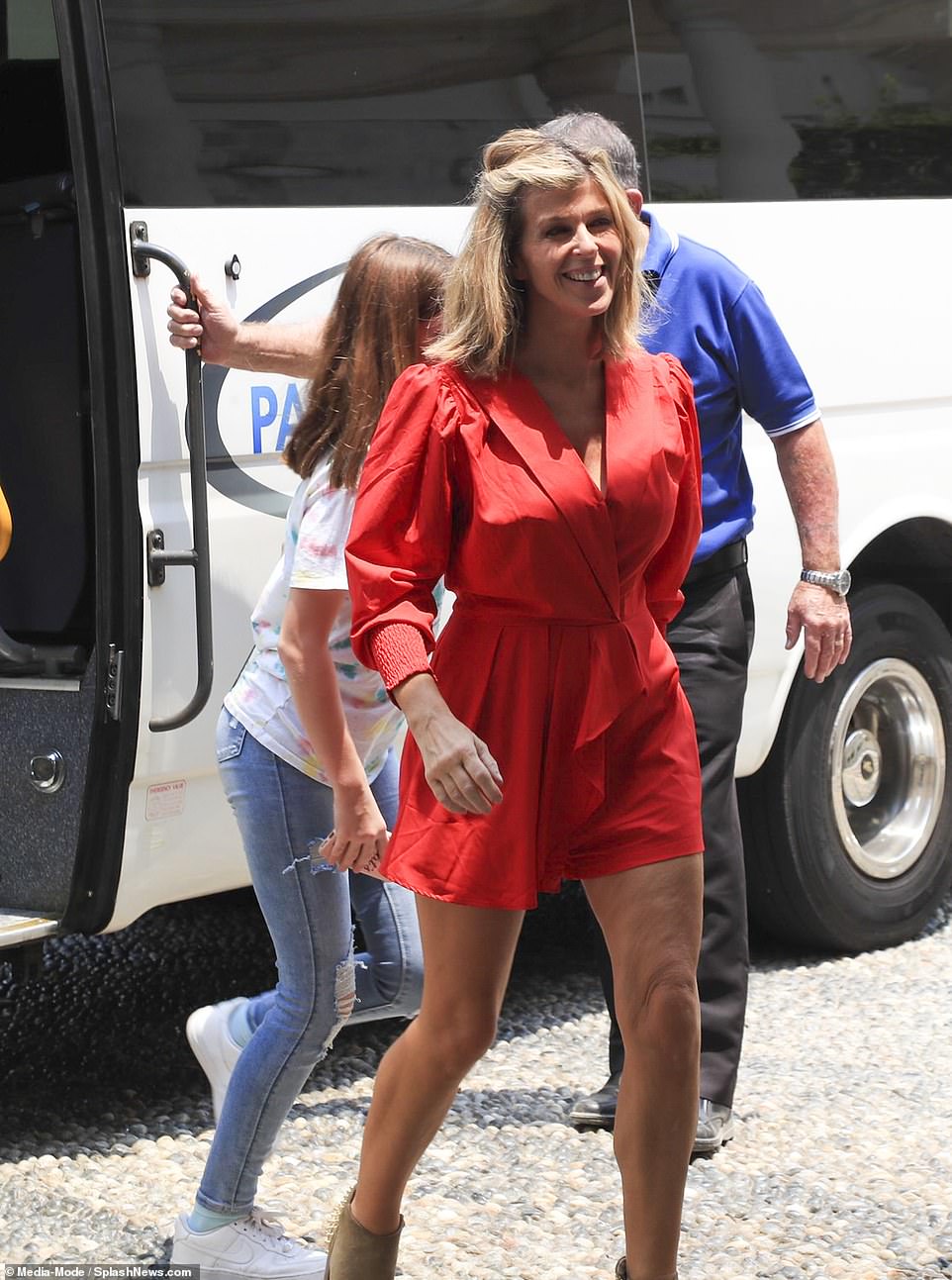 Lady in red: Kate Garraway beamed as she showed off her jungle weight loss