I’m A Celebrity 2022 RECAP: Mike Tindall is the EIGHTH star to leave the camp ahead of the final… after taking on the famous Cyclone trial with Matt Hancock, Jill Scott and Owen Warner

Keep up to date with all the drama from Saturday evening’s episode of I’m A Celebrity… Get Me Out Of Here! live with MailOnline.

That’s it for this evening but we will see you back here tomorrow evening for the FINAL!

Will Matt, Jill or Owen be crowned King or Queen of the jungle? Get your votes in.

Thanks for tuning in along with us tonight!

zara being 20th in line to the throne but still jetting out to greet mike on the bridge has me howling i love them #imaceleb pic.twitter.com/OJeMc5I3L3

Talking with Ant and Dec during his exit interview, Mike explained: ‘It’s been an amazing journey and we were very lucky with the people we had in there and we came together as a team.’

‘It’s just been a lot of fun, a lot of laughs. Everyone had their distinct humour and Seann will always stick in my mind with his humour,’ he continued.

The presenters noted that Mike had been there for the rest of camp, with the rugby pro responding: ‘Yeah, that is just the type of person I am.’

And before heading to the famous bridge, the sportsman added: ‘I want Jill to win’. 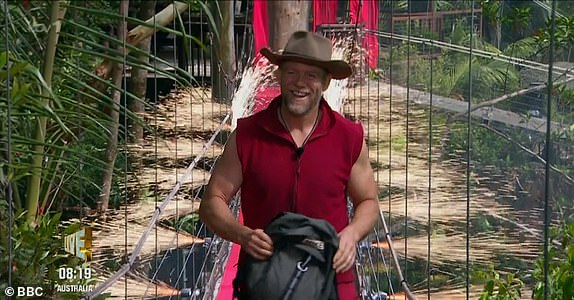 Mike has been voted out as the eigth celebrity to leave the show.

So, that means that the final three are Matt Hancock, Jill Scott and Owen Warner – as the trio said their goodbyes to Mike, who managed 22 days in camp.

Who will make up the final three?

Ant and Dec have made their way to camp to reveal the EIGTH celebrity to be voted out.

It was a meal of flathead fish and yams for the four celebrities, as a result of winning four stars in the challenge.

And it was an impressive one, as they tucked into the makeshift fish and chips.

During the meal, they reminisced on their time in the jungle, with Jill sweetly saying: ‘My heart is so full.’

‘It’s very much a shared experience and that’s been much the joy of it, the camaraderie,’ said Matt.

While Mike said: ‘Everyone is going to take something away from someone and that’s the point of it.’

‘i’ve done a lot of growing up in here. I know for a fact that I have made friends for life in here, I’m coming out of here a man,’ said Owen.

Owen arrived with the treat and had a brownie, Jill had chocolate, Matt had cheese and a cracker and Mike had two nachos and some guacamole.

Matt and Jill shared their treat so both had some cheese and chocolate.

But the camp weren’t too impressed with the portions, saying: ‘Thank you very much Kev, do think you’ve got to work on your portion sizes though.’

Jill said: ‘His portion sizes are tiny, come on Kev.’

Tasked with reading quotes and matching them to which campmate said it, the celebrities were told they could win any treat from past Deals On Wheels challenges.

Mike read: ‘Celebrities, in this bucket are 11 quotes, one for each of this year’s campmates. All you have to do is match the quote with the correct campmate.

After some chopping and changing they got it right in the first go, celebrating: ‘Got it in one!’

As he ate his ice cream, Owen realised the England football score was burnt into the stick of it.

Jill said: ‘As if that wasn’t a big enough surprise, the football scores were written on the lolly stick!’

‘Come on, get on!’ said Owen, before singing ‘It’s Coming Home!’

The celebrities were rewarded with four ice creams as they returned to camp victorious.

Matt read: ‘Celebrities, while you were away at Cyclone, four choc ices were hidden around camp. All you have to do is find them before they melt.’

‘We celebrated… [then thought] wait, choc ices melt. Get on it!’ said Owen.

They split into sections and found all four, with Owen finding the first one. One was in the bath, one in the RV, one by the creek and one in the Bush Telegraph. 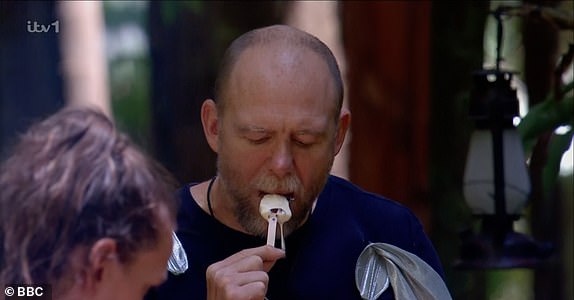 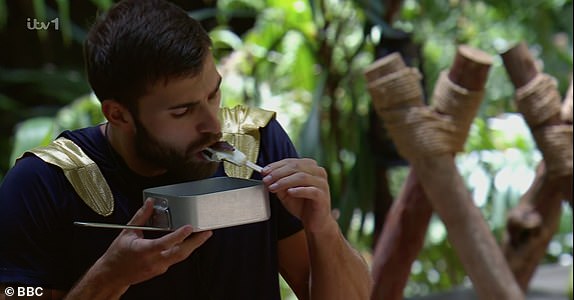 With The Final Countdown fittingly playing over the challenge as they rushed to take the win – Mike, Owen, Jill and Matt all managed to successfully hold on to their stars at the markers – winning four meals for camp with a full house.

The turbulent challenge then saw Mike come after Matt, as the massive balls, spraying water and obstacles were being launched at the group.

Owen then came in last, before a waterfall of bouncy balls was set free to take out the stars and wash them all the way across the course – with the celebrities having one minute to return to their markers. 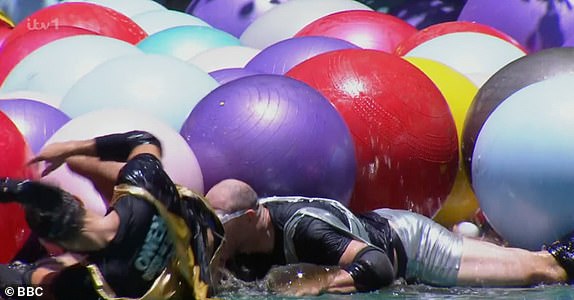 Jill’s entrance was filled with tumbles, with the Lioness accidentally going to the second star and boycotting the first. But managing to make her way back, she waited there for Matt to come along and grab three stars.

The former Healh Secretary made quite an entrance with a head-first dive, before confidentally strutting throught the course. But things took a turn as his confidence was short-lived, with the MP falling and ending up back at the beginning of the course.

Introducing team Cyclone 2022! Who's outfit are you digging the most? #ImACeleb pic.twitter.com/hAiNJFCktq

The campmates find out that it’s time to face the Cyclone trial.

‘I never thought I’d make it to the Cyclone. It’s going to be absolutely brilliant, I can’t wait,’ said Matt.

While Owen said: ‘This is so sick, come on! I’ve got the cape, I’m in the tight spandex and I’m loving life.’

And getting into the correct costumes, the quartet all donned metallic hotpants and matching capes, going by the names of Quicksilver, Goldic***s,  Purple Reign and the Bronzed Bronco.

Mike, Jill, Owen and Matt say their goodbyes to Seann as he is the seventh star to leave the jungle.

While Matt added: ‘Ah, god I’m gutted that Seann’s gone, he’s just got an absolute heart of gold. And he’s funny as hell. Everybody’s seen that.’

‘I was obviously relieved that I’m staying but then devvo’d because I’m losing Seann and Seann is such a big energy in this camp, he’s hilarious. He’ll be really, really missed,’ said Owen 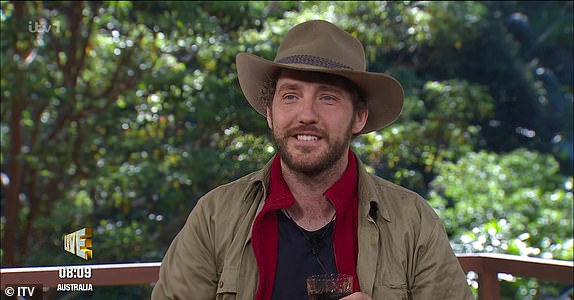 Going back to yesterday, we see Mike accusing Matt of attempting to sway the public vote by placing his name-printed clothing in shot of the camp cameras.

The rugby pro also jibed: ‘Once a politician, always a politician,’ while claiming that the MP was ‘polling for votes’ in a bid to be crowned King Of The Jungle.

Each campmate has their name and voting lines printed on the back of their jackets and T-shirts, with Mike claiming Matt is making these more visible to the cameras.

In the words of Ant and Dec, welcome to Celebrity Cyclone day!

This is your five minute warning! I’m A Celebrity begins at 9:15 on ITV1, so make yourself comfortable and enjoy the show.

It was goodbye for Seann Walsh during Friday evening’s episode, as the comedian lost the public vote and just missed out on being in the final four.

Joining Ant and Dec for his interview, Seann said: ‘That was crazy. What just happened?’ before going on to recall his initial shock at seeing Matt Hancock in the jungle as they first entered the camp.

In a preview video for tonight’s episode, the four remaining stars prepare to fight through powerful wind and jet streams as huge balls are launched at them.

After the rules were explained to them, confirming that they all had to be on their markers by the end to win four meals for camp, they were ready for the trial to begin.

Matt quipped: ‘This is like the best waterpark ride in history!’

The best part of im a celeb is celebrity cyclone tbh

One of my favourite nights of the year ….its Cyclone night on I'm a Celebrity.

Hello and welcome to day 21 of I’m A Celebrity…Get Me Out Of Here!

It’s the episode we’ve all been waiting for, as the iconic Celebrity Cyclone trial returns – which sees the stars take on a Total Wipeout style water assault course in a bid to win meals for camp.

And as Jill Scott, Mike Tindall, Matt Hancock and Owen Warner prepare to take on the famous challenge, who do we think will pull it off?