Putting together a home theater system requires a few components: a TV or projector, stereo receiver, and a pair of speakers. There are two main types of home theater speakers: Floor standing, which are tall and sit directly on the ground, and bookshelf, which are smaller and can be placed on a shelf, stand, or table.

Both have their merits, and while neither is wrong, one style may work better in your particular situation. We’ve broken down the main differences between bookshelf and floor standing speakers below, and recommended a pair of each once you’ve made your decision.

Size Makes A Difference In More Than One Way

Bookshelf speakers tend to have fewer drivers because of their limited space, and need to be placed on a shelf or table to stay at ear level. But the advantage of having a smaller set of experience is being able to use them in smaller spaces, including a desk, or wall mounting them to the corners of your room. This flexibility makes bookshelf speakers more attractive if you’re trying to make the most out of a smaller space.

Bookshelf Speakers Can Be Powered

For the best audio performance, you’ll want to get a pair of passive speakers and pair them to an external amp, but there’s no denying the convenience of plugging a pair of speakers into an outlet, connecting your components (a turntable, computer, or TV), and being all set up.

The downside to powered speakers is that they need to fit an amp inside their frame, which leaves even less room for drivers. This may sound like an immediate disqualification, but I’ve tried several pairs of powered speakers and higher-end models can sound really good. Better yet, they support features like Bluetooth, which allow you to stream audio to them wirelessly without losing standard ports like RCA (red and white), optical audio, and 3.5mm inputs.

To integrate them into a home theater, you’d run a Y-Cable (3.5mm on one end, RCA on the other) or optical cable from your TV’s headphone jack to the back of the powered speakers. All of your TV’s audio (including sound from game consoles, Blu-ray players, and media streamers) would be played through the speakers.

If space is no object, you’ll almost always get the best audio experience out of a pair of floor standing speakers, but many people don’t have that luxury. If you need to conserve space, you can get a pair of passive bookshelf speakers that sound excellent (I’ve used bookshelf speakers almost exclusively for the past six years, and loved them).

If versatility is your big concern, and you want a set of home theater speakers that are a little more high tech, a pair of powered bookshelf speakers are your best bet. 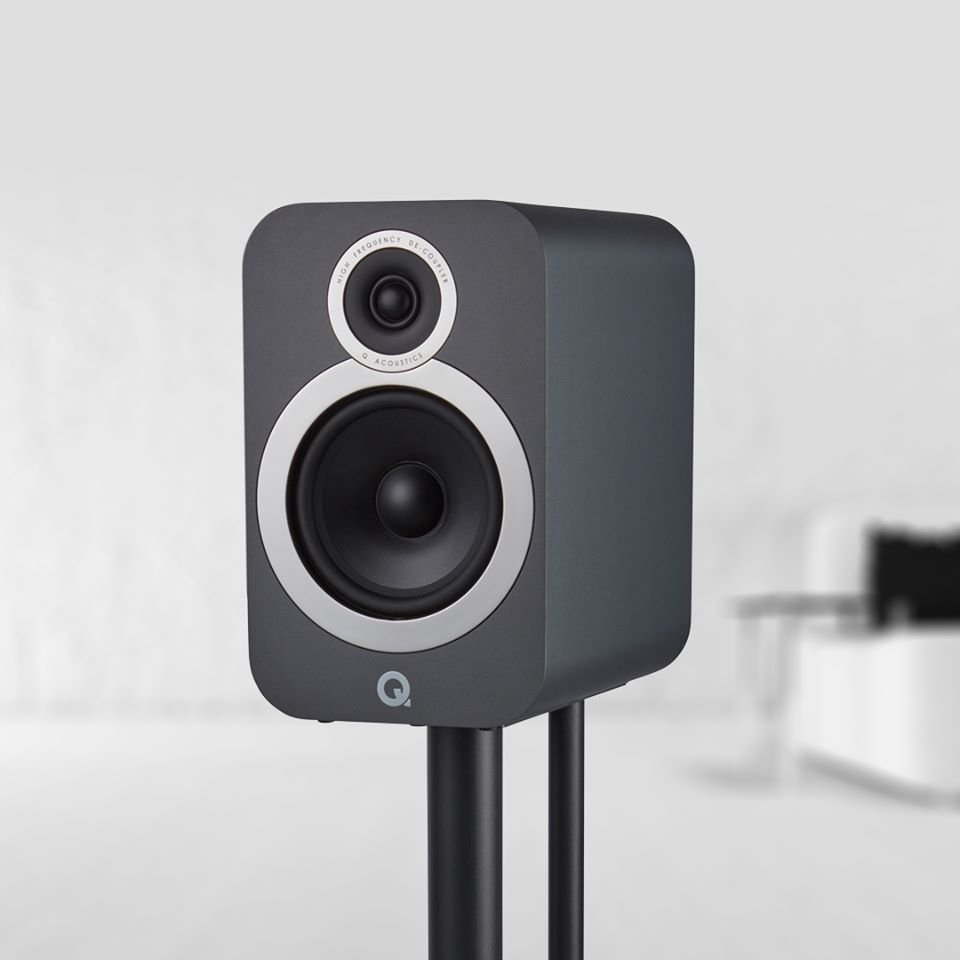 The 3030i is Q Acoustics’ latest pair of bookshelf speakers, and it’s the one I use every day.

The speakers are 12.95 inches tall, which is normal for bookshelf speakers, but 12.8 inches deep, which means you’ll need a pretty thick table to fit them. The 3030is have two drivers: A 6.5 inch woofer, and a 1 inch tweeter. Each driver is designed with nine or more components to reduce vibrations or other problems that cause audible distortion. The outputs where you attach speaker wire were redesigned to accept both banana clips and traditional cables.

Q Acoustics developed a technology called P2P (Point to Point), which helps the enclosure (physical speaker) stay rigid when you’re playing loud music, or tracks with a lot of low end. The company says this improves the quality of the speaker’s stereo soundstage, which allows you to hear every instrument in the mix, like you would in a high-end pair of headphones.

In my experience, the 3030is are an incredible sounding pair of speakers. I’ve paired them with Bluesound’s Powernode 2i amplifer, and listened to music, podcasts, TV shows, and played video games. The performance has been universally excellent, especially bass, which comes through really clearly. None of the music I’ve listened to, whether it came from TIDAL, Apple Music, or my personal collection, ever sounded distorted or unbalanced. Despite having two drivers, I found bass, midrange, and treble sounds to be accurately reproduced, without any element in the three frequency ranges overpowering one another.

If you want a pair of bookshelf speakers that perform well and look really nice, this is the set I recommend. 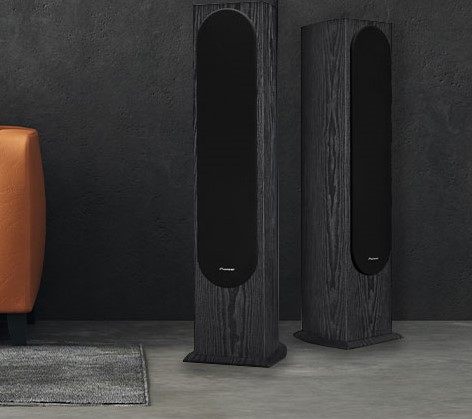 Pioneer’s SP-FS52 floor standing speaker was designed by Andrew Jones, a popular designer who was tasked with bringing audiophile features to a more consumer-friendly option. I say speaker, because Pioneer doesn’t offer it in pairs, so you’ll need to get two of them. Once you get over that quirk, there’s a lot to like about the SP-FS52.

It measures 35.2 inches high, and has four drivers: three 5.3 inch woofers, and a 1 inch tweeter. The company designed a custom eight-element crossover, which is the part of a speaker that receives a signal from your stereo receiver, and sends it to different drivers. Pioneer’s crossover was designed to ensure the speaker sounds its best.

Other design choices, like placing a larger magnet behind the woofer to increase bass accuracy, and creating a custom wave guide to expand the tweeter’s sweet spot were done to squeeze more performance out of each component. I’ve heard other speakers in Pioneer’s Andrew Jones collection, and they’ve performed well while listening to music, playing video games, and watching movies or TV shows.

If you want a pair of floor standing speakers, and have the space, you can’t go wrong with this pair. 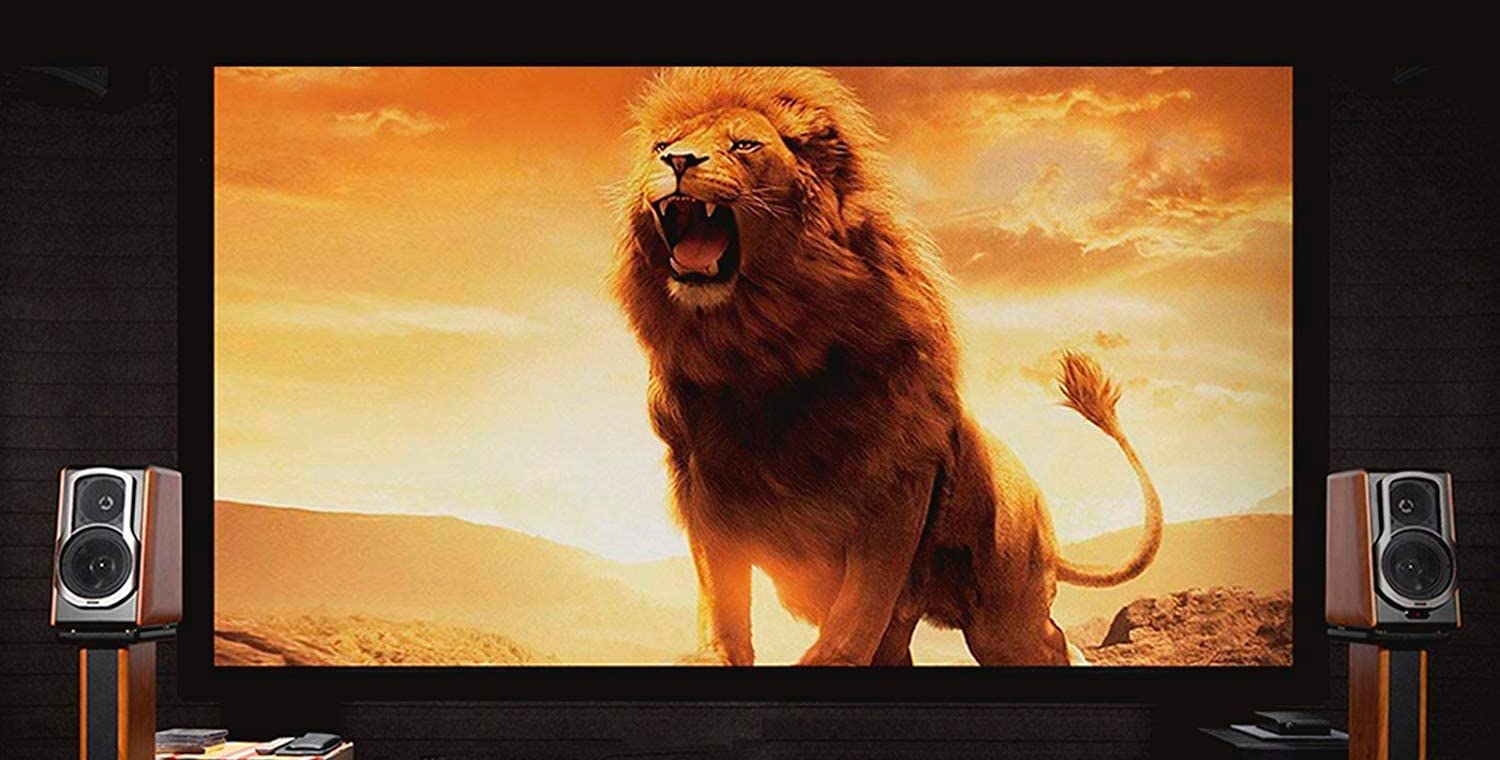 Passive floor standing and bookshelf speakers are the most common choices for home theater use, but powered speakers shouldn’t be dismissed.

Edifier’s S2000Pro are a pair of powered bookshelf speakers with all the features you’d expect to find in passive bookshelf speakers, and a good stereo receiver. They’re 20 inches tall, and have a single 5.5 inch woofer, and one tweeter (Edifier neglects to mention the size), which is pretty standard.

On a technical level, the S2000Pros are jam packed. They use a custom DSP (Digital Signal Processor) that manages which frequencies get sent to which driver, and makes sure they’re balanced in real time. They have a set of RCA, optical, coaxial, and grounded XLR inputs, so you can connect almost any audio source into it. The speakers also support Bluetooth 4.0, so you can stream music to them wirelessly.

You can switch between four different EQ (equalization) settings: vocal, monitor, classic, and dynamic, or customize the way they sound by adjusting bass and treble knobs on the back of the speakers. Having finite control over the S2000Pro’s sound means you can make them sound best for your ears depending on what you’re listening to. Edifier includes a wireless remote that lets you change the volume, or switch between inputs and the speakers’ built-in EQ settings from across the room.

If you want an ultra compact home theater system, and don’t mind that you can’t pair these speakers to the stereo receiver of your choice, Edifier’s S200Pros are an excellent choice. When you consider their other convenience features, like their bundled wireless remote and built-in Bluetooth, they become an even better one.