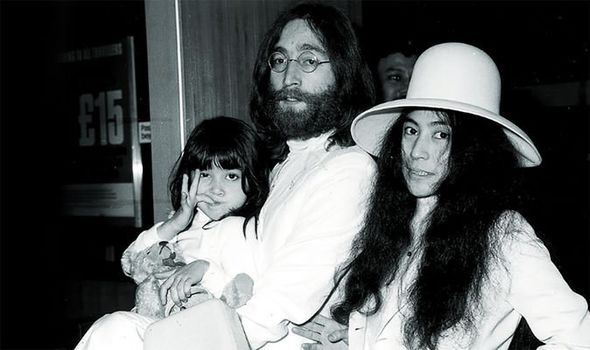 The greeting is just a whisper, barely audible at the beginning of one of the most loved festive songs ever written. “Happy Christmas Kyoko”, is the breathy refrain from Yoko Ono, addressed to her infant daughter, uttered at the start of Happy Xmas (War Is Over), a smash hit on both sides of the Atlantic when released in December 1971 and a feature of every Yuletide playlist half a century on.

But behind the seemingly cosy display of family sentiment lay a desperate, tragic and occasionally absurd trauma that John and Yoko were going through at the time of the record’s release – namely, a search for Yoko’s daughter Kyoko.

It was a search that played a crucial role in their decision to leave England for the US on August 31, 1971 – 50 years ago later this month.

John would never return. Kyoko was the only child from Yoko’s marriage to Tony Cox, a jazz musician, film maker and fellow artist of the avant-garde.

Wed in 1963 after Yoko’s divorce from her first husband Toshi Ichiyanagi, Tony and Yoko’s brief partnership ended when Yoko met John Lennon while on an extended trip to London to put on a solo show at the Indica Gallery.

Yoko had put Kyoko in the care of Cox’s family for nine months while she and Tony made in roads into the New York art scene.

Once calling her pregnancy a tumour, Yoko even began arranging for one of Cox’s aunts to formally adopt Kyoko until Tony got wind of the idea and put a stop to it.

What began as an amicable separation between Tony and Yoko soured after Yoko and Lennon became romantically involved.

In the next three years the Lennons spent $1.5million in today’s money searching for Kyoko – a hunt that saw the famous couple frequently break the law, turning themselves into a long-haired Bonnie and Clyde.

The dangerous escapades began in 1969 when John and Yoko discovered that Tony and Kyoko were in Majorca staying in an ashram with the Maharishi Mahesh Yogi, the same guru who John, and the rest of the Beatles, had gone to India to stay with a year previously.

John and Yoko flew to the island and attempting to snatch Kyoko from a hotel kids’ playgroup but the child’s wailing for her father busted their attempt at kidnap.

Spanish police arrested John and Yoko and they were only released after the Beatles manager Allen Klein flew to the island and, through a local lawyer, paid off a relative who worked at the court.

This unknown individual managed to alter Lennon’s confession that he and Yoko had attempted to kidnap Kyoko into a less incriminating statement.

Perhaps persuaded by the amateurish nature of this attempt the famous couple decided a different approach was needed if they were to find Kyoko. John and Yoko’s next step was to act on information that the girl and her father were living in the US.

Realising that the only way to succeed in their quest was to stop their frequent toing and froing across the Atlantic, John and Yoko arrived in New York, via St Thomas in the US Virgin Islands, on the last day of August. Their dog-leg flight path was an intentional ploy to put US immigration off the scent that the ex-Beatle peacenik with a drug conviction was entering the country.

At first the move to the Big Apple seemed to be working. With visitation rights to Kyoko granted, John and Yoko flew to Texas in early December 1971, greatly looking forward to a legally sanctioned reunion with the eight year old girl.

Cox however, had other ideas.

Already well aware of what the famous couple were capable of after the kidnapping attempt, he prevaricated, stating he and Kyoko would only meet them in the presence of his church minister.

Rather than accepting the terms of Cox’s proposed meeting, John and Yoko flew back to New York in a rage, immediately deploying a phalanx of detectives who began staking out the house that Cox’s minister, Austin Wilkerson, shared with his wife as well as setting up surveillance on the home of Cox’s brother Larry.

When Yoko brought suit against Cox a few weeks later, just before Christmas, a judge ordered Cox to produce Kyoko.When he stalled he was thrown in jail.

But after his lawyer obtained a writ of habeas corpus (wrongful imprisonment), Cox was freed after only one night in the cells. He and Kyoko promptly fled.

Unaware of their surveillance tactics on Cox’s family and friends, most Americans were sympathetic to John and Yoko’s situation. Appearing on the biggest TV talk shows in the country. such as Dick Cavett, the couple pleaded on camera for Cox, should he be watching, to get in touch with them as they meant neither he nor Kyoko’ harm. If Cox was watching, he chose to ignore them.

With all of America, and much of the rest of the world, aware of the situation, he needed the deepest of cover if he were to avoid being apprehended either by Yoko’s cadre of private detectives or simply by a concerned Lennon fan keen to reunite Kyoko with the former Beatle’s new wife.

He found his cover in the form of the Church of the Living Word, a cult based in California’s San Fernando Valley where the tight-knit community vowed to protect him and his daughter from the apoplectic Beatle and his grieving wife.

Lennon said: “I’m living with a woman screaming for her child every night. We’ve got so desperate we’ve been putting messages on our records.”

With something approaching a national manhunt for Cox and Kyoko underway, in March 1972 Yoko’s officially awarded sole custody .

But it made no difference. Cox simply refused to comply with the order. A desperate John wrote a card for Kyoko’ on her ninth birthday which read: “We want peace, no FBI, no detectives. We understand the problem. Please get in touch with us through any group or media you trust. We are making no moves. We will wait for your call or letter. War is over if you want it. Give us a chance. Love and Peace, John Lennon.”

The chase veered into the realms of the absurd in July that year when the Lennons, along with Craig Pyes, the editor of a now long forgotten alt-music magazine called Sundance, drove around San Francisco where they believed Cox and Kyoko may have been hiding out .

Believing she had spotted her ex-husband entering an apartment complex, Pyes was ordered by Yoko to start knocking on doors pleading for information or sightings.

One apartment owner too stunned to speak simply stood back as John Lennon and Yoko Ono, at this point the most famous couple on the planet, stormed into her apartment, searching for Cox and craning their necks out of the windows to see if the wily father was running down the street with Kyoko.

Despite being one of the most high profile fugitives on the planet, Cox was nowhere to be found.

He continued to stay one step ahead of John, Yoko, the law, the private detectives and the media.

In a 1981 interview Cox defended his actions stating: “Yoko wanted access to Kyoko and we (he and his new wife Melinda) weren’t against that… but we would find so much havoc introduced into our lives, we would have to withdraw… any contact with them was like touching a high voltage machine.”

By the mid-1970s the search had exhausted the Lennons. The birth of their own child Sean a year later and the couple’s new found domesticity in their New York apartment building suggested Kyoko would never be reunited with her mother.

Although Yoko received a telegram from Cox and Kyoko after John’s murder in December 1980, sent from an undisclosed location, it was 14 years after Lennon’s death that a 31-year-old Kyoko reached out to her mother to regain contact.

Working as an artist herself in Colorado and keen to stay well out of the media spotlight, Kyoko today is, by all accounts, still close to Yoko who, at the age of 87 and now confined to a wheelchair, rarely leaves the same Dakota apartment building she once shared with. John .

Just before his death, John looked back on the escapade which – despite his wealth, fame and influence – didn’t succeed.

He didn’t live to see her again, and, reflecting on the colossal risks in which he and Yoko partook, he admitted: “It was a classic case of big boys playing macho. It turned into me… trying to dominate Tony Cox. Tony’s attitude was, ‘you got my wife but you won’t get my kid’.”