How Johnny Depp blew his half billion bounty: Pirates of the Caribbean star bought £60million of houses, a private island and £25,000 of wine every month 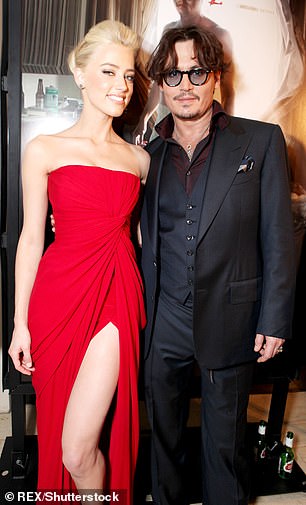 Depp explained to the court in London that he had been late to Amber Heard’s 30th birthday party as he was having an important meeting with his advisers. The pair are pictured above in 2011

There has been no shortage of jaw-dropping revelations during the Johnny Depp libel trial.

One disclosure, however, really is a riddle wrapped in an enigma — the assertion made last week that Depp found out in 2016 that he had ‘lost’ $650 million (£510 million).

Depp explained to the court in London that he had been late to Amber Heard’s 30th birthday party as he was having an important meeting with his advisers.

He told the court: ‘Since Pirates II and III, I had made — and it seems a ludicrous number — $650 million.

‘When I fired (my previous management) I had not only lost the $650 million but I was $100 million in the hole because they had not paid the government my taxes for 17 years. It was a bad meeting.’

The astonishing figure amounts to considerably more than Depp, 57, is usually said to be worth by generally reliable sources such as Forbes magazine.

However, as incredible as the sum sounds, given that Depp earned between £45 million and £60 million a year for 12 years between 2004 and 2016, he could have comfortably earned in the region of £600 million.

Most recently his wealth was estimated to be in the region of £160 million.

It would certainly explain why Depp was said to be ‘on the brink of bankruptcy’ in a sympathetic piece by Rolling Stone magazine in 2018. A series of law suits against his advisers — dubbed by one lawyer ‘the endless Johnny Depp litigation train’ — also indicate all was not well financially.

So how did he get here? Did Depp blow hundreds of millions, due to what some associates dub a ‘compulsive spending disorder?’ Or is someone else to blame for his financial downfall?

A £60m passion for property

Johnny’s house habit began with the kind gesture of buying a 41-acre farm in Kentucky for his mother and other family members in 1995.

He also bought her an apartment in LA.

Documents from the 2017 legal action against his advisers reveal Depp spent £60 million on properties.

His portfolio includes five houses in the Hollywood Hills worth £15 million (one is pictured below) plus five penthouses in Los Angeles. He has latterly sold two of these.

He has a 37-acre compound called Hameau in France, complete with its own private restaurant, Chez Marceline, and personalised china.

In 2015 Depp reluctantly agreed to sell the property to pay debts, according to court papers. 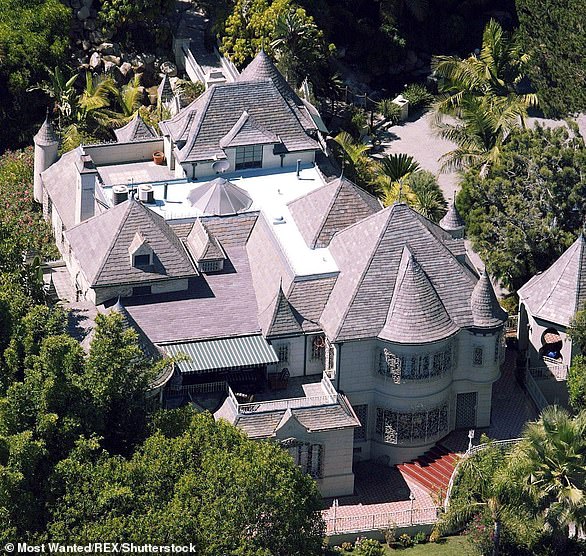 His portfolio includes five houses in the Hollywood Hills worth £15 million (one is pictured) plus five penthouses in Los Angeles. He has latterly sold two of these

During the Pirates Of The Caribbean years — when Depp also acted in other films — he earned between £45 million and £60 million a year. His deal to play Captain Jack Sparrow netted him around £240 million and included a cut of the profits.

In 2012, Depp, who has starred in 71 films, was in the Guinness World Records as the highest-earning actor of that year, having taken home £60 million.

‘Basically, if they’re going to pay me the stupid money, I’m going to take it,’ he told Vanity Fair in 2011.

The court heard this week that he earned £45 million in 2016, the year of his divorce. He continues to be paid between £5 million and £20 million a film, with the two recent Fantastic Beasts films being particularly lucrative.

He was paid an estimated £3 million for being a face of Dior’s Sauvage cologne but that contract petered out over a backlash about use of Native American images.

Estimates of his net worth take into account career earnings and his assets which, in this case, will include a large property portfolio.

From poverty to plenty

Raised in penury by waitress mother Betty Sue in Kentucky — his father John was absent for a large part of Johnny’s childhood — showbusiness allowed Depp to escape into a wonderland of plenty. His big break was acting in soap 21 Jump Street when he was 24.

Part of his ‘Southern gentleman’s code’ which he referenced in court is a determination never to count the cost — certainly not when it comes to showing friends, girlfriends or family a good time.

Former actress and model Tally Meirovits dated Depp in the 1980s. She told the Mail this week: ‘Money didn’t mean anything to him. That was a point of pride.’

Judging by the way he acted in his 20s, Meirovits thinks Depp could have burned his way through any amount. She said: ‘We were going around in helicopters and little private jets — and that was when he was just starting out.’

His romance with British model Kate Moss was also marked by sybaritic luxury. Even though Moss had a flat in Paris, she and Depp would stay in a suite at the Paris Ritz — at Johnny’s insistence.

Depp long held an ambition to match his mentor and hero actor Marlon Brando who had his own island in Tahiti.

He bought the 45-acre tropical paradise of Little Halls Pond Cay island in the Bahamas in 2004 for £2.8 million.

It is made up of a string of tiny atolls. Depp named some of the six beaches on the island after his daughter Lily-Rose, son Jack, ex-partner Vanessa Paradis and his mentors Marlon Brando and Hunter S. Thompson.

Another beach is named after actor Heath Ledger, who died of a drug overdose in 2008. Depp used the island to detox in 2014 and later held an £800,000 wedding celebration for his now ex-wife Amber Heard there in 2015.

Little Halls Pond Cay has permanent staff on the payroll. British actor Paul Bettany holidayed with Depp on the island in 2015, after which his daughter Agnes started to call Depp ‘Uncle Fun’. 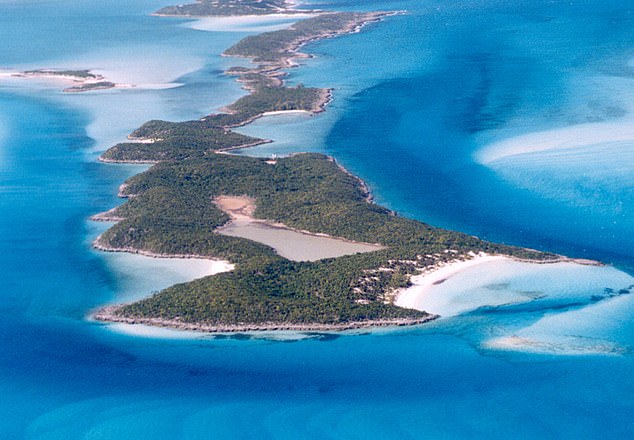 Depp long held an ambition to match his mentor and hero actor Marlon Brando who had his own island in Tahiti. He bought the 45-acre tropical paradise of Little Halls Pond Cay island in the Bahamas in 2004 for £2.8 million

former advisers claimed in a court case in 2017 that Depp was burning through £1.6 million a month — in excess of the income he received from films. What did he splurge on?

He allegedly spent £24,000 a month on wine — telling advisers this was an investment.

They countered that it was only an investment if you didn’t drink it right away. In an interview in 2018, Depp appeared to confirm his booze bills were gargantuan.

Art was a passion and Depp spent millions collecting work by Warhol, Basquiat and Modigliani. After his divorce, Depp auctioned two Basquiats for £9 million.

Daughter Lily-Rose was given a £5,560 sofa after she saw one on reality TV show Keeping Up With The Kardashians.

Cash blown on thatch for hut

Despite his earnings, Depp was warned by his business managers TMG in January 2016 that he only had ‘30 days of liquidity left’.

They said he had cashflow problems all the time, despite his wealth, which meant he was late paying taxes.

They said they bailed him out for £3.9 million which he owed and gave him a credit card. Depp and his staff charged £800,000 in ‘island expenses’ to the card, plus £7,500 for thatch for an island hut.

He started to make minimum payments on the card before declining to pay more.

They parted company in March that year and TMG attempted to foreclose on his house to recoup the £3.9 million loan.

It’s not all indulgence though. In 2008 Depp donated £1 million to London’s Great Ormond Street Hospital (GOSH).

It had saved the life of his daughter, Lily-Rose, after an E. Coli infection caused her kidneys to fail while he was in the UK filming Sweeney Todd.

He has continued to support the children’s hospital, spending time on wards each year dressed as Captain Jack Sparrow (something he has also done in Vancouver, Canada, above). He also nudged Disney to contribute £10 million to GOSH.

In 2005, Depp bankrolled the funeral of his friend, author Hunter S. Thompson, who shot himself, aged 67.

Depp spent £2.3 million on a 153-metre tower, the top shaped like a clenched fist, from which a cannon fired Thompson’s ashes into the sky. 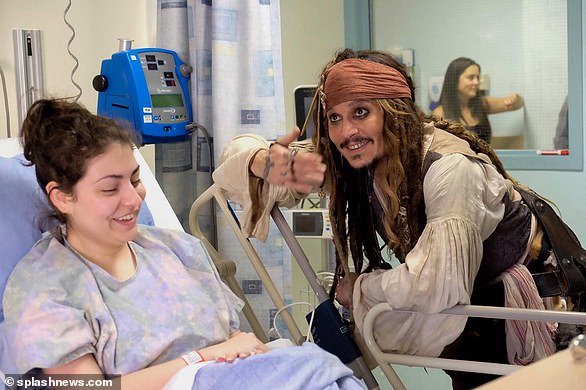 He has continued to support the children’s hospital, spending time on wards each year dressed as Captain Jack Sparrow (something he has also done in Vancouver, Canada, above)

Joel and Robert Mandel of TMG looked after his business affairs from 1999 to 2016.

Depp claimed their mismanagement cost him $650 million (£510 million), including £5 million in fees on taxes — which he paid late for 13 years running.

His suit also said they had got £19 million of commissions from him wrongly on movie deals. He said he had been ‘betrayed’. TMG said he was warned about looming financial disaster but ignored them.

They counter-sued in 2017, calling him ‘a spoiled brat with no impulse control’ and said he was a compulsive spender. The lawsuit was settled in mediation.

Lawsuit against his own lawyer

Depp settled another lawsuit with his personal lawyer Jake Bloom who, he claimed, had improperly collected over £24 million from him.

Bloom, who’d made Depp rich thanks to a profits deal he crafted for the Pirates Of The Caribbean franchise, counter-sued.

A judge ruled in Depp’s favour, saying an oral agreement they had about fees should have been in writing. Bloom paid Depp an undisclosed eight-figure sum in October 2019.

Evidence of Depp’s financial crash can be found in his relatively measly divorce settlement with Amber Heard.

He paid her £5.6 million plus her legal costs and other liabilities incurred during the marriage totalling ‘several millions of dollars’.

He was said to have earned £48 million during their marriage, and it was widely expected she would walk away with at least £20 million.

Heard donated her settlement to charity.

A boat bought by J.K. Rowling

In 2001 he bought a £16 million, 156 ft yacht described as a ‘steamship-style motor yacht’ with multiple decks and five staterooms.

He sold the vessel to a U.S. businessman in 2015 who, in turn, sold it to J.K. Rowling for £22 million shortly afterwards.

Rowling sold the vessel after less than a year.

In 2001 he bought a £16 million, 156 ft yacht described as a ‘steamship-style motor yacht’ with multiple decks and five staterooms

A legal buff the oligarchs love

At Depp’s side as he has taken on his lawyers, managers, Amber Heard and the rigours of a libel trial, is lawyer Adam Waldman.

He started to work for Depp in 2016 and calls Heard’s allegations of domestic violence ‘a hoax that spawned a thousand smears’.

He previously represented Oleg Deripaska, an aluminium magnate and Russian oligarch with strong ties to Vladimir Putin, earning, it is said, more than £1 million for his work.

He is acting for Depp in the current libel action in London and one that will go to trial next January in Virginia.

Rolling Stone magazine noted: ‘Waldman seems to have convinced Depp that they are freedom fighters taking on the Hollywood machine rather than scavengers squabbling over the scraps of a fortune squandered.’