She’s said to be working on a secret homeware project.

And Holly Willoughby, 38, shared a glimpse of her luxury bathroom with fans on Instagram on Friday.

The This Morning co-host Holly Willoughby, 38, was amused as she shared a snap of her beloved cat Bluebell peeking over her free-standing bath during her pamper session. 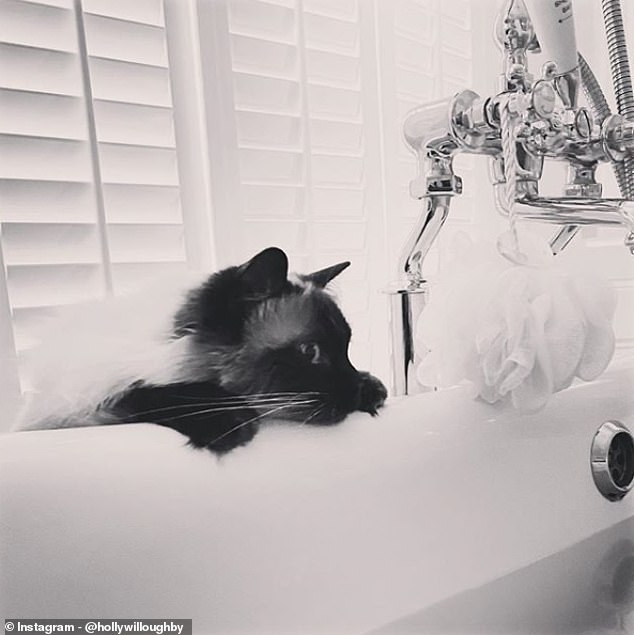 Get your paws off! Holly Willoughby, 38, shared a glimpse of her luxury en-suite with her beloved cat Bluebell peeking over the side of the bath on Instagram on Friday

While Holly, who is in the midst of presenting this series of Dancing On Ice, was enjoying time out from mummy duties, it didn’t stop Bluebell vying for attention.

The white tub, which is the focal point of the bathroom, was situated next a large window with Venetian blinds- allowing light to flood the room if they were opened.

It is one of the few images of Holly’s home that she has released as she hints at secret plans to become the face of Dunelm in a homeware project. 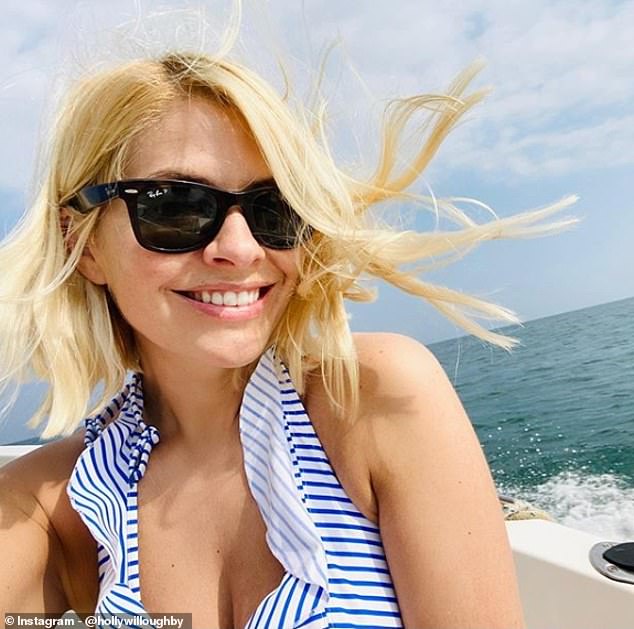 Christmas break! Holly is said to be working on a secret homeware project (pictured on holiday last month)

The television presenter is a brand ambassador for companies like Marks & Spencers and is now expected to become the face of another – as she prepares to collaborate with Dunelm.

In the teaser image of the homeware campaign, posted on Friday, Holly posed on a cosy bed while a make-up artist touched up her look and member of the wardrobe department adjusted her outfit.

Holly also shared another snap where she posed in front of another bed while smiling brightly for the camera. 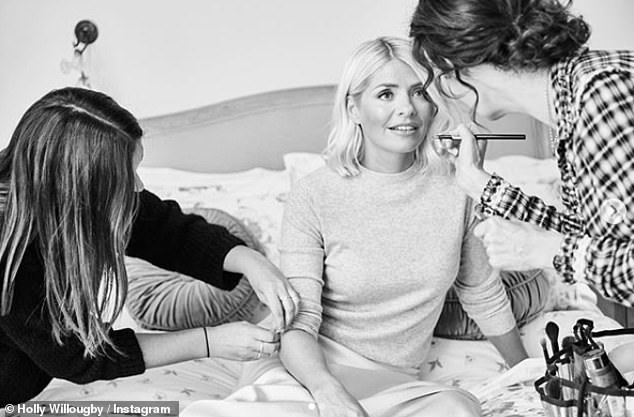 Brand ambassador? Holly  teased a secret project that was the ‘stuff of dreams’ as she shared behind-the-scenes snaps from shoot with Dunelm via Instagram on Friday

The TV presenter looked stylish in a casual chic ensemble that saw her pair a comfy knit jumper with straight-leg denim jeans.

Giving a hint to fans about the project, Holly wrote in the caption: ‘Have a little news coming soon… and it’s the stuff of dreams.’

This comes after Holly recalled the moment her dress split open at 10 Downing Street in 2016 on Thursday’s episode of This Morning, which she has previously shared on the ITV chat show. 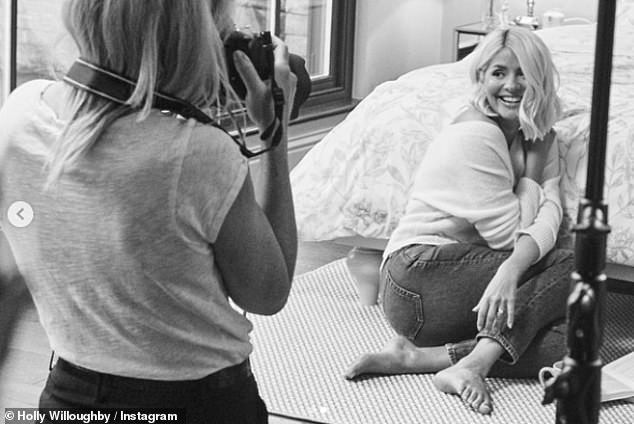 Enjoying herself: The This Morning co-host took to Instagram to tease the production, and she posed in front of a bed while smiling brightly for the camera

The host made the embarrassing confession during a candid fashion fail segment on the show with RHOC star Dawn Ward and journalist Dawn Neesom, where she admitted she was left hiding in the toilets wearing her ‘huge knickers’.

Holly added she had to ask someone in the bathroom to get her husband Daniel Baldwin and she was left covering her broken dress with a coat the rest of the evening.

The mother-of-three confessed: ‘One of the most embarrassing moments of my life was when I went to 10 Downing Street and when you go in you have to give your phone and coat in for security. I was wearing a dress that had a zip top to bottom at the back.

‘I went to the loo and as I went to pull my skirt up the zip just went bang and the dress just split in half. There was nothing I could do about it.

‘Luckily I was wearing huge knickers but I couldn’t ring anyone to come and help me. I had to wait until a lady came in and I had to say can you go and find my husband and ask him to bring my coat?’ New ad? Giving a hint to fans about the project, Holly wrote in the caption: ‘Have a little news coming soon… and it’s the stuff of dreams’