Holly Willoughby caught the eye as she posed in a animal print tea dress by Marks & Spencer in an Instagram post on Saturday.

The television presenter, 41, looked elegant in the round neck Midaxi piece which featured three-quarter length sleeves, with the dress costing £39.

This Morning host Holly showed off her hourglass shape as she wore a black handbag over her shoulder with the item sitting on her waist. 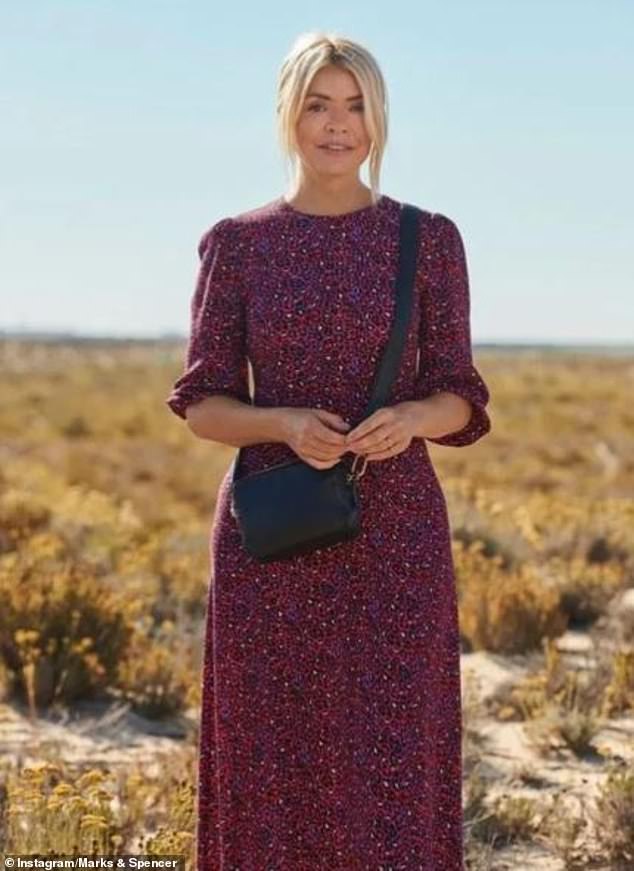 In style: Holly Willoughby caught the eye as she posed in a vibrant mixed colour animal print tea dress by Marks & Spencer in an Instagram post on Saturday

She showed off her natural beauty in the snaps, opting for minimal make-up and using a palette of natural hues, as she posed in the golden sunlight.

The screen star wore her blonde hair pinned back behind her head, with a few strands handing down on one side of her face.

It comes after Holly snuck out of the National Television Awards before the ceremony ended on Thursday, leaving Phillip Schofield to face the music as he was awkwardly asked about their ‘queuegate’ controversy. 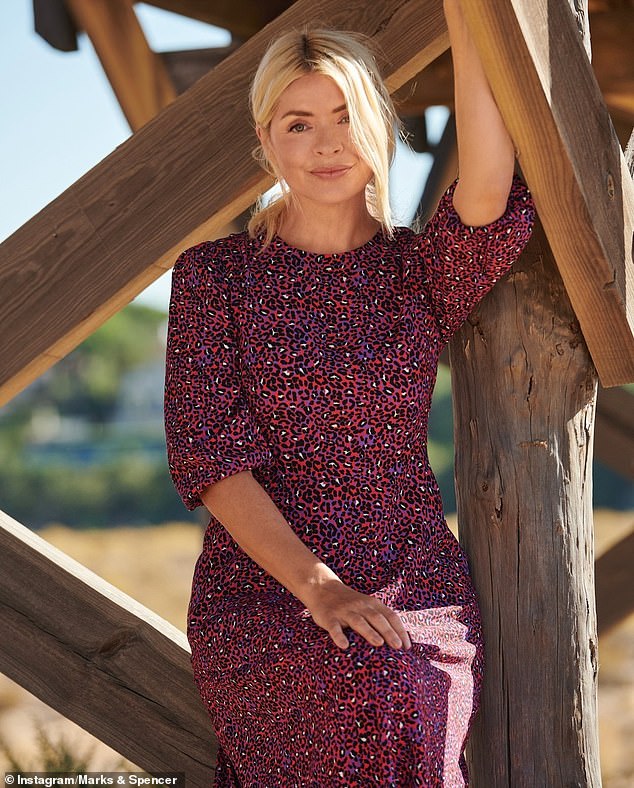 Strike a pose: The television presenter, 41, looked elegant in the round neck Midaxi piece which featured three-quarter length sleeves, with the dress costing £39

The TV presenters were booed at the event when This Morning won the Best Daytime award, following allegations they had skipped the queue to see the Queen lying in state last month.

Holly departed the awards show – held at London’s Ovo Arena Wembley – just before 10pm, more than half an hour before the ceremony finished.

While Holly avoided any further embarrassment by leaving the show early, co-host Phillip, 60, was left flustered as one guest later probed him on queuegate – leaving him awkwardly responding with a gushing ode to his fans. 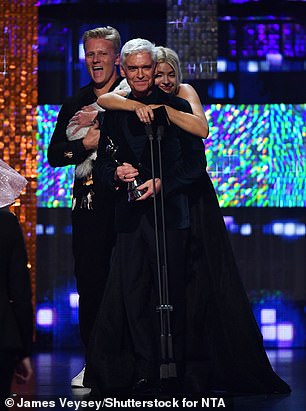 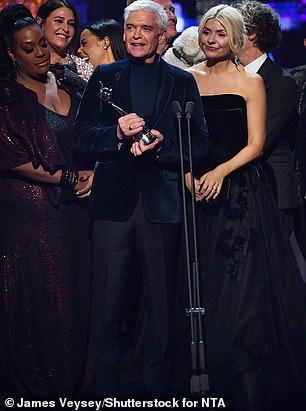 Scandal: Tearful Holly Willoughby was booed at the National Television Awards on Thursday before sneaking out of show early after backlash over ‘queue-gate’ – while flustered Phillip Schofield stumbled as he was quizzed over the scandal

Yet as he extended thanks, many viewers took to social media to display their disbelief that the show had scooped the gong, demanding for Phillip to ‘hand back’ the award.

Footage on Twitter saw the presenter being asked: ‘Phil do you think this vindicates you for queuegate? Do you think now the public have said “actually we don’t care about queuegate”‘?’

Smirking, Phillip simply responded: ‘We are so grateful for our amazing viewers! We love them.’

A source told MailOnline: ‘This is an award voted for by viewers which makes it extra special. The whole team were delighted to receive their 12th consecutive gong at the NTAs and the cheers they received on winning! It was a great night for everyone.’

Shortly after the incident Holly left the ceremony, with a source telling The Sun: ‘Holly picked up her award for Best Daytime and then left 30 minutes after. Normally she stays around for a drink with Phil and the team but she did an Irish exit. She was seen leaving the ceremony and getting into a car outside just after 10pm.’

The insider added that it was ‘very awkward’ for Holly and Phil to go up on stage after the boos from the crowd. 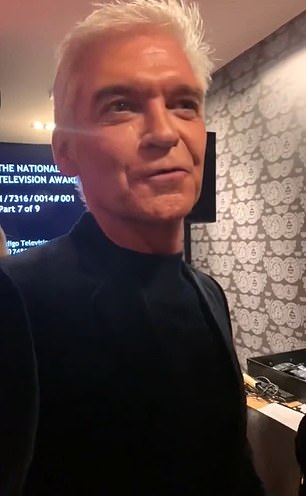 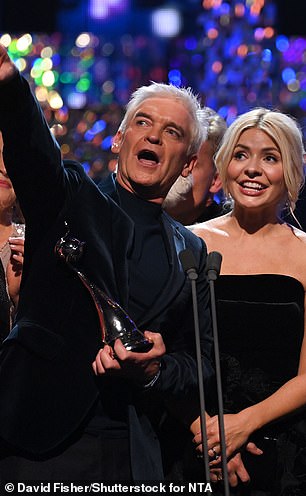 Irish exit: Holly departed the awards show – held at London’s Ovo Arena Wembley – about a half an hour before the ceremony ended while Phillip was left flustered as one guest later probed him on the recent queuegate controversy

Holly added: ‘This Morning has a very special relationship with you, you make our show for us, you really do. All these guys on the stage here, Alison [Hammond] and Dermot [O’Leary], Rochelle [Humes] and Vernon [Kay], Josie [Gibson], everyone. Thank you for all your support.’

The presenters found themselves at the centre of the ‘queuegate’ controversy’ in September when they were accused of skipping the queue to see the Queen lying in state, which they both denied.

Phillip and Holly faced considerable backlash, with a petition for the presenters to be removed from television altogether reached 73,000 signatures.

The furore began on September 16 when the presenters’ approach was contrasted with that of football legend David Beckham the same day.

The former England captain waited in line for almost 14 hours to pay his respects to the Queen – despite being offered a pass by an MP to jump the queue.

Good Morning presenter Susanna Reid also won plaudits for waiting for seven hours with her mother to file past the coffin. 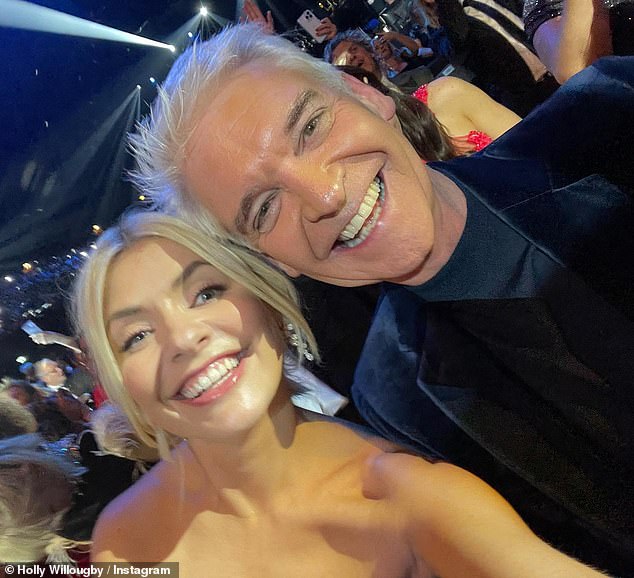 ‘The best team’: Holly reportedly departed the awards show – held at London’s Ovo Arena Wembley – about a half an hour after she accepted the award