‘All I say is I have six children, and they run away!’ Hilaria Baldwin claims she was approached by ‘a few men’ saying ‘inappropriate things’ while walking her dogs in New York

Hilaria Baldwin has revealed she was approached by ‘a few men’ saying ‘inappropriate things’ while she took her dog for a walk in New York on Wednesday.

The mother-of-six, 37, who recently welcomed her baby daughter Maria via surrogate, took to Instagram Stories to share the unnerving ordeal, before joking she sends the men running by revealing she’s mother to such a large family.

Hilaria also shared a snap of the moments leading up to her outing in the city as she donned a face mask to take her pet pooches Dama and Gitana out for a stroll. 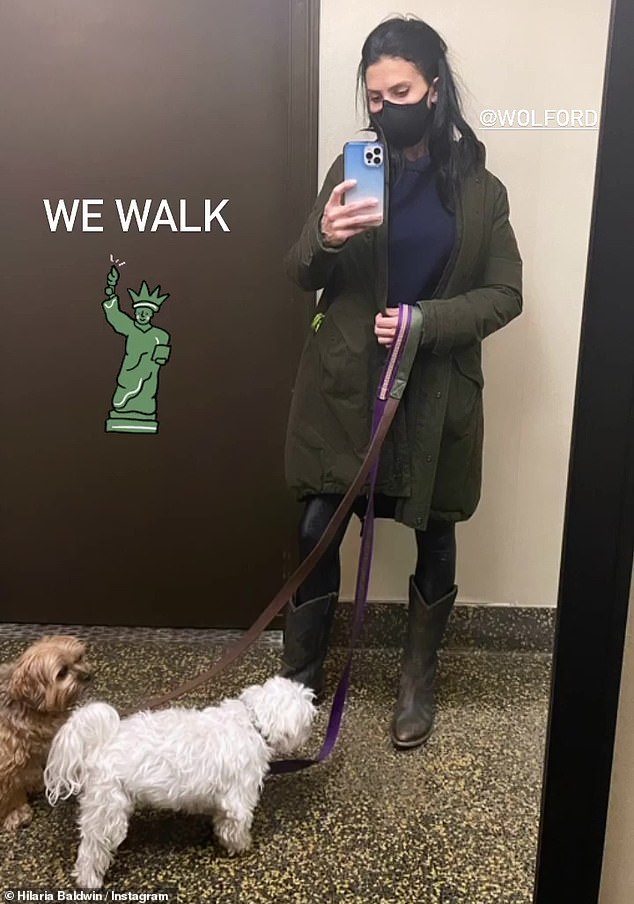 Shocking: Hilaria Baldwin has revealed she was approached by ‘a few men’ saying ‘inappropriate things’ while she took her dogs for a walk in New York on Wednesday

Hilaria shared a text post on her Instagram offering her humorous take on the scary moment she was heckled by men during the walk.

She wrote: ‘Walked my dogs, per usual had a few men approach me saying the typical inappropriate things.

‘Now all I have to do is say: ”I have six children,” and they practically go running away.’ 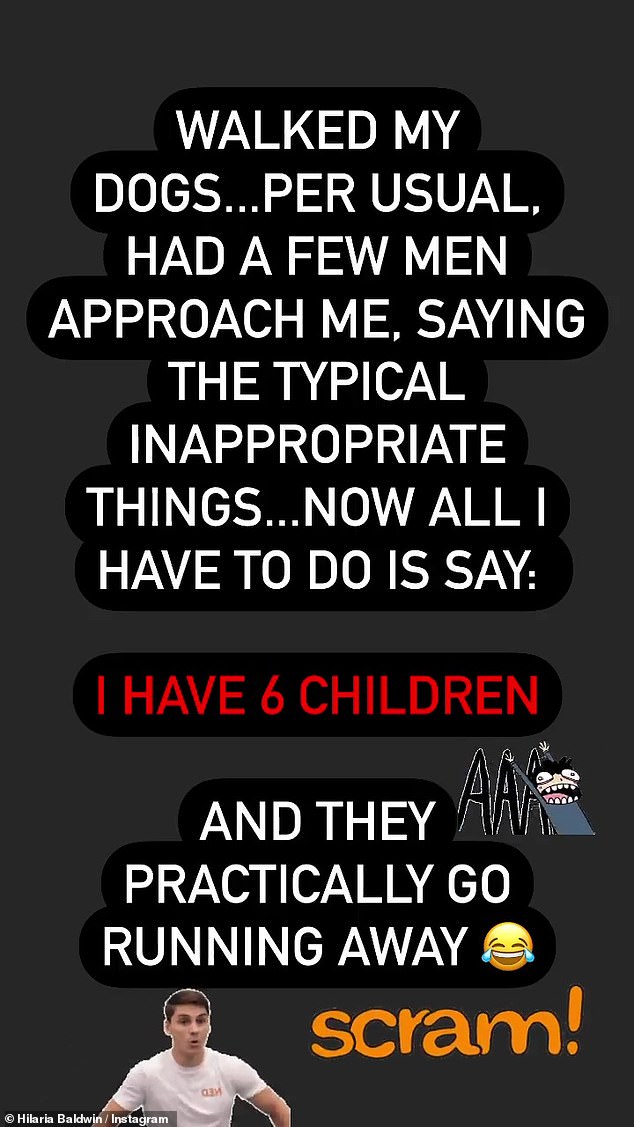 Scram! The author took to Instagram Stories to share the unnerving ordeal, before joking she sends the men running by revealing she’s mother to six children 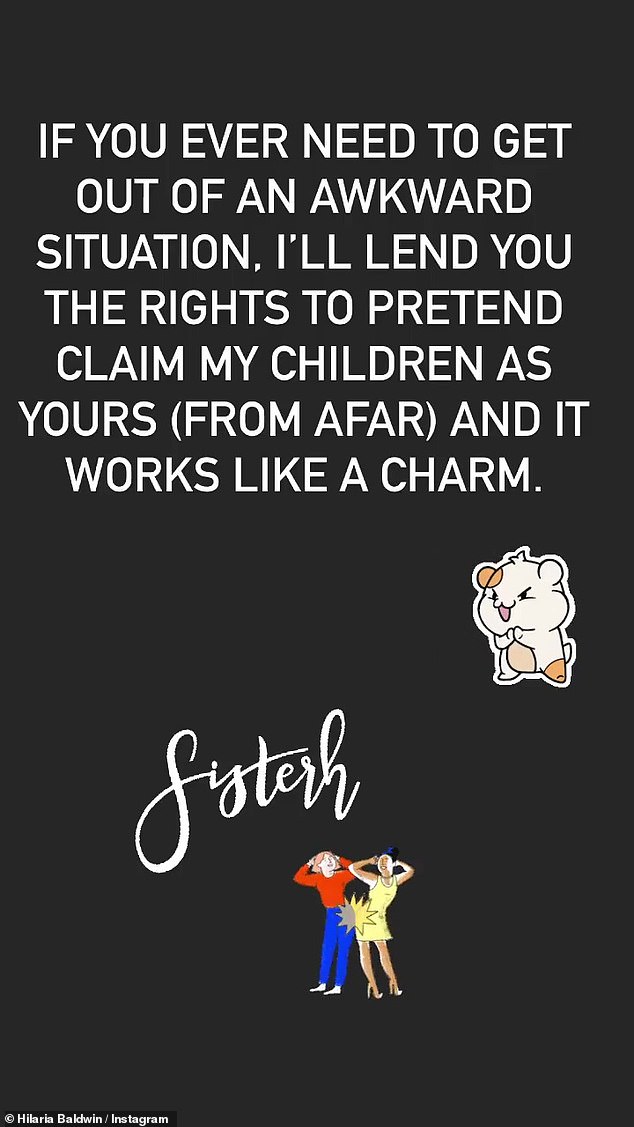 Helping hand: Hilaria went onto joke that fans could use the same excuse of having such a large family to get out of ‘awkward situations’ 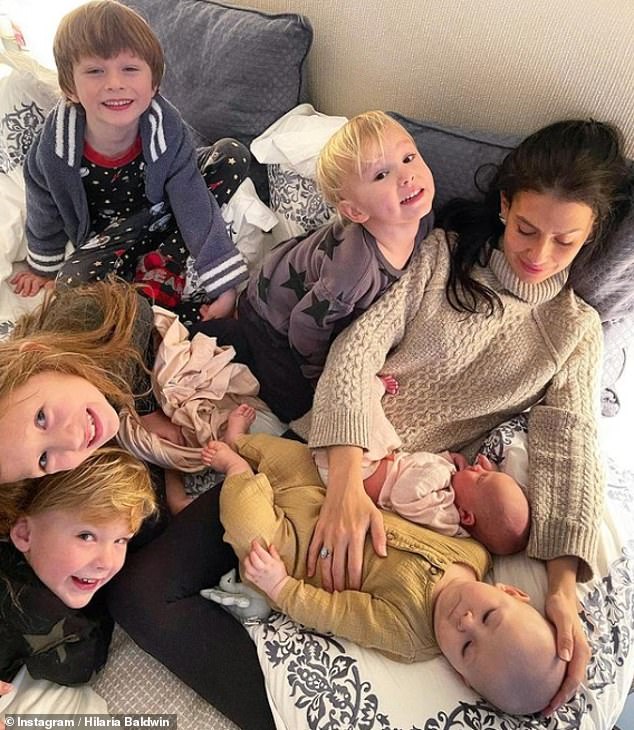 Surprise: Last month Hilaria and her husband Alec surprised fans by announcing the arrival of their sixth child via surrogate, six months after the birth of their son Eduardo

In a second post Hilaria added: ‘If you ever need to get out of an awkward situation, I’ll lend you the rights to pretend claim my children as yours (from afar) and it works like a charm.’

Hilaria welcomed her daughter Maria via surrogate in late February this year, just six months after she gave birth to her son Eduardo herself in September 2020.

Alec and Hilaria shocked the public and sent the internet aflutter when they announced Maria’s birth but an insider has since told People: ‘It’s no one’s business about a woman’s right to choose how and when she expands her family.’ 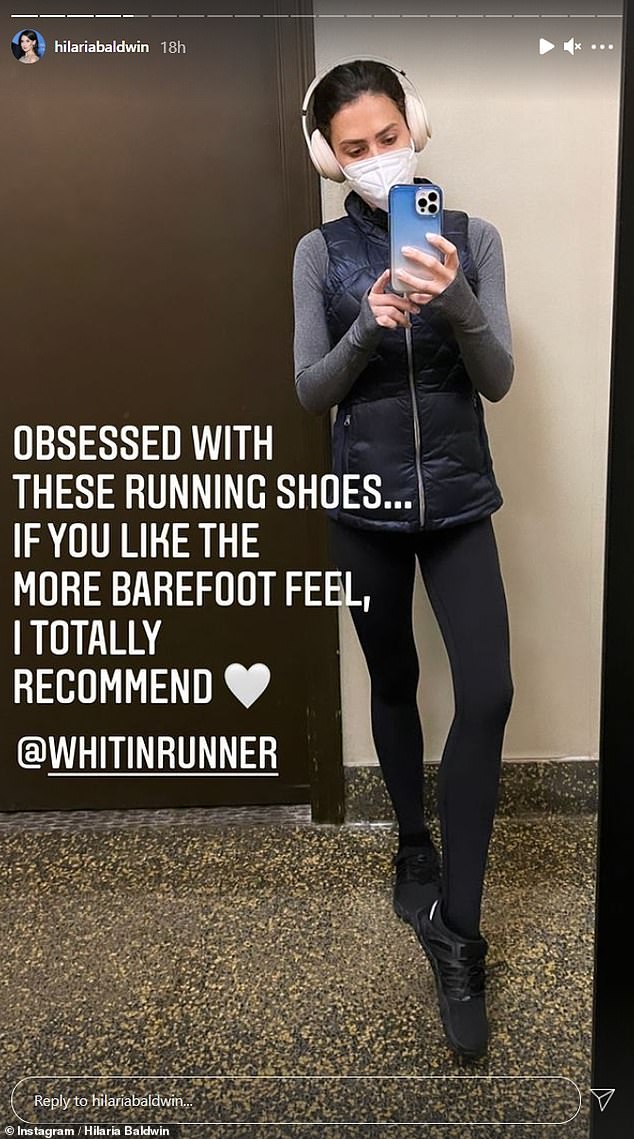 Stylish: She previously shared a glimpse of her stylish sportswear to take a walk through the city, ensuring she donned a face mask during the Covid pandemic

Recently the mother of six revealed on her Insta Stories that she is breastfeeding both of her infants and joked: ‘This cow is tired and thirsty.’

Although she usually has her hands full with her six children, Baldwin still found the time to shoot a quick yoga video for her Instagram account.

In the video, the social media personality was seen performing a deltoid-focused exercise while positioning herself on a cushioned platform. 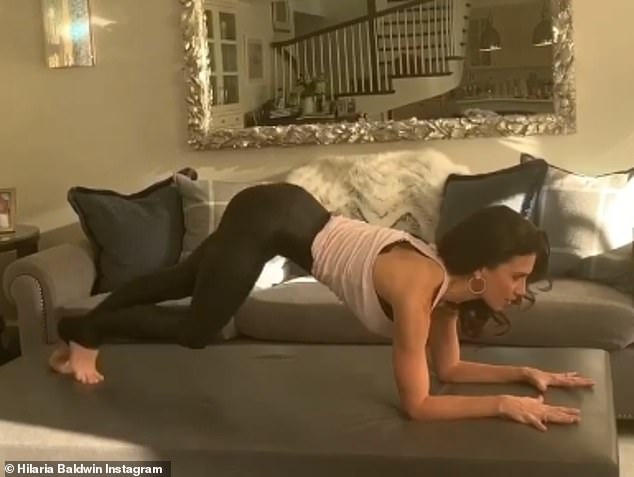 Staying fit: Although she generally has her hands full with her many children, Baldwin found the time to film a quick yoga video for her Instagram account

Baldwin was dressed in a pair of form-hugging black leggings as well as a light pink tank top during her video shoot.

The podcaster entered the world of yoga at an early age and founded her first studio shortly after she graduated from New York University.

She went on to open several other locations and released an exercise video near the start of her burgeoning career; Baldwin now regularly shares videos of her workout routines on her Instagram account. 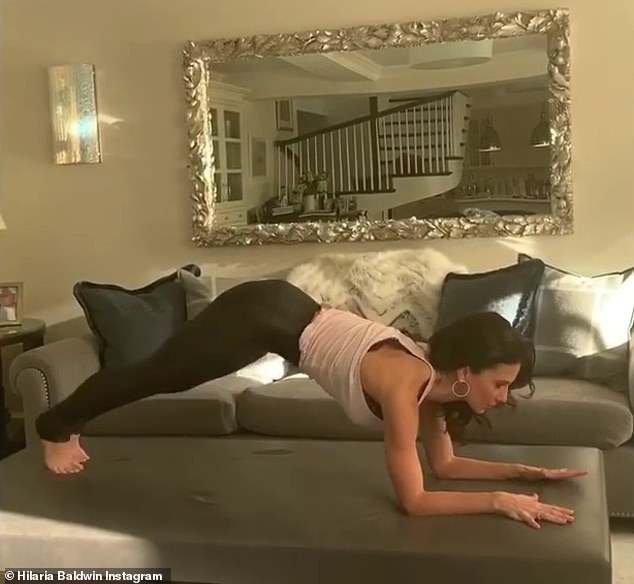 Appropriate attire: In the video, the social media personality was dressed in a pair of black leggings and a light pink tank top