Remember when Jack Harlow mused, “Dua Lipa, I’m tryna do more with her than do a feature?” Yeah, about that!!!!

According to Page Six, Jack and Dua are fully dating after meeting in person for the first time at the Variety Hitmakers Brunch in November, where she became “quite smitten.” Per a source, they’ve been in “constant communication” since meeting, and Jack is “very interested in her,” is “going to strongly pursue” the romance, and “is going to do his best, as he has always been a fan of her.” 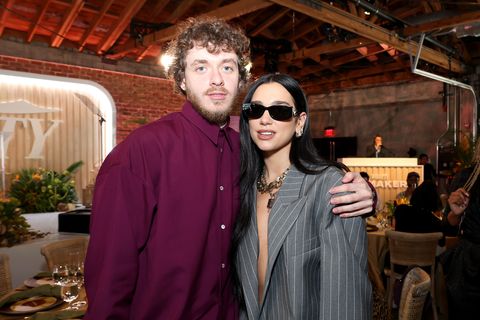 Apparently, Jack flew to New York City to meet up with Dua after her appearance at the good ol’ Jingle Ball, and they had lunch at a restaurant in the Meatpacking District the next day. Of course, they arrived separately to keep things under-the-radar, which…obviously didn’t work.

Jack previously spoke on The Breakfast Club about asking Dua if he could use her name as the title to his song, saying she was “thrown off.”

“I wanted to get her blessing, so I FaceTimed her and played it for her because I didn’t want her to be blindsided by that or feel like creeped out or anything,” he said. “If she had said, ‘Yo, I hate it. I don’t want it to come out,’ it wouldn’t have come out….She was like, “Oh, I mean it’s not my song. I suppose it’s OK.’ She was just kinda thrown off and she just kinda let it go.”

Reminder: Dua was last linked to Trevor Noah after The Daily Mail published photos of them “kissing and hugging on a cozy night out” in New York City, where they had dinner at Miss Lily’s.

Anyway, I’ll give you a moment to process all this!