It started as a cult gang drama and is now watched by millions. So as Peaky Blinders starts its fifth series here’s how its A-list cast have spawned an entire industry (and have costumes to die for)

Hurrah for all those who love a bit of eye-gouging, a tight throttle, a garrotting or two, a good stabbing and a crisply cut three-piece suit.

Because Peaky Blinders, the relentlessly violent and gory BBC gangster drama that follows the lives, times and dodgy cohorts of the Shelby family in Birmingham, returns next weekend.

Judging by the reactions of fans who have already watched the trailer for the fifth series, it’s likely to be a bigger hit than ever. 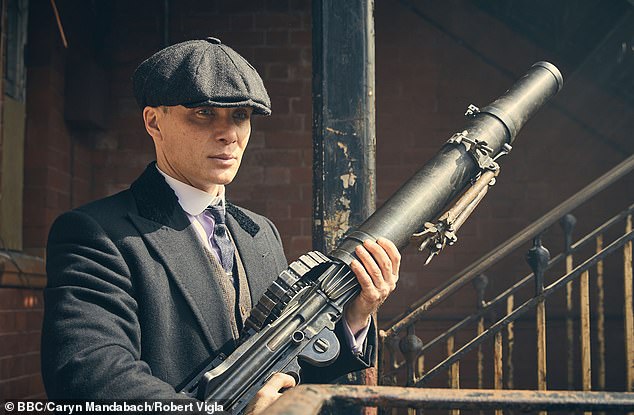 When he’s not smashing someone over the head with a glass or unleashing hell with a Lewis machine gun, our Tommy still finds the time to pursue a more than healthy love life

Written by Steven Knight (who co-created Who Wants To Be A Millionaire?), and starring everyone from Cillian Murphy and Helen McCrory to Tom Hardy and Charlotte Riley, the BAFTA-winner has gone from a slow-burner to a huge hit, attracting up to four million viewers per episode.

And, as Jane Fryer discovers, from Shelby-themed weddings, to music festivals and spin-off gins, Peaky madness is going global.

The series so far…

As creator Knight puts it: ‘Tommy is one of those who came back from [World War I] horrifically damaged, who were spat back into society without any counselling.

‘And many brought their weapons home with them. There were a lot of guns around at the time. Tommy has a huge disdain for authority — everything he was told is a lie.’

Over four series, we have seen Tommy battle with an Italian mafioso and a crusading police department — while finding time to make pacts with the IRA, a gang of gypsies and even Churchill.

The new series begins after the 1929 stock market crash, with Shelby newly installed as Labour MP for Birmingham South. 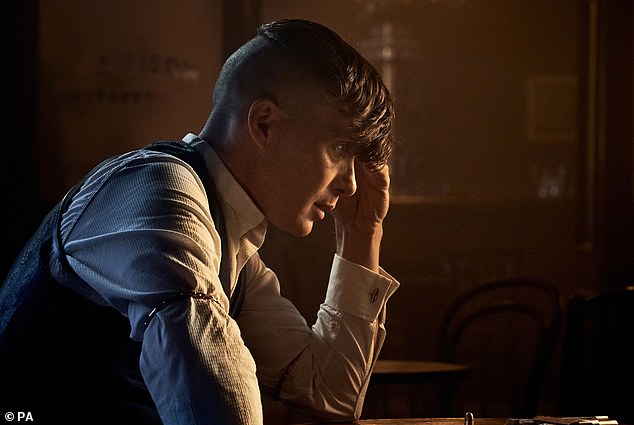 How it took off

Set in Small Heath, Birmingham, the show is filmed in Toxteth, Liverpool (and also in the Black Country Living Museum) and features a mainly British cast.

Thanks to a distribution deal with Netflix (and the addition of Tom Hardy in series two), the series soon gathered fans in the States and worldwide.

Knight based the series on the gang that may or may not have terrorised Birmingham in 1919, when it was the world’s biggest industrial city.

He was inspired by stories told to him by his father about his gangster uncles.

Though the Peaky Blinders are so-called for the razor blades hidden in the peaks of their flat caps, in real life Tommy and Co are more likely to have relied on steel-tipped boots, belt buckles, knives and their bare hands.

Still, it’s the show’s attempts to grapple with real historical events that keeps it grounded.

The rise of trades unions; the IRA’s violent campaign; Russian aristocrats fleeing the communist revolution . . . Peaky Blinders is a history lesson on steroids. 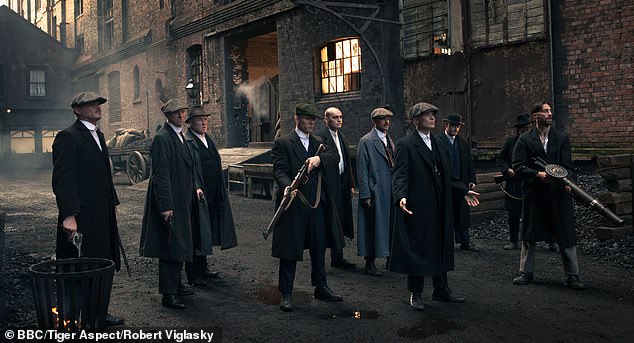 Though the Peaky Blinders are so-called for the razor blades hidden in the peaks of their flat caps, in real life Tommy and Co are more likely to have relied on steel-tipped boots, belt buckles, knives and their bare hands

When he’s not smashing someone over the head with a glass or unleashing hell with a Lewis machine gun, our Tommy still finds the time to pursue a more than healthy love life.

In the first series, we watched him fall head over heels for sultry blonde Irish barmaid Grace Burgess, played by Annabelle Wallis. They eventually marry and have a son, Charles.

After Grace is shot in series three, Tommy finds solace with a Russian grand duchess and a wealthy widow. He then resumes a romance with former prostitute Lizzie Stark (Natasha O’Keeffe), with whom he has a daughter, Ruby.

The Blinders crew have always been partial to the odd bloodbath — a touch of eye-slashing and the odd ear lopped off — but, in series five, it goes even further.

When Helen McCrory saw the opening scenes at a screening in Birmingham last month, she had to look away. ‘I think it’s disgusting, gratuitous violence,’ she said. ‘It is . . . no, not gratuitous — disgustingly violent. But it is and it should be.’

Knight insists that he’s happy with the general levels of gore, as Peaky Blinders abides by the rule that ‘any act of violence has [to have] a consequence in terms of the story’, to avoid glamorising it. 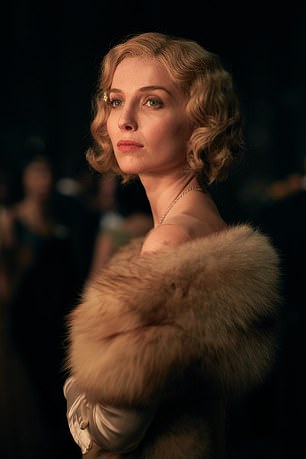 In the first series, we watched him fall head over heels for sultry blonde Irish barmaid Grace Burgess, above, played by Annabelle Wallis. They eventually marry and have a son, Charles

Murphy loathes Tommy’s hairdo, as it takes months to grow out. But hairdressers insist that not since ‘The Rachel’ (the style popularised in Friends by the character played by Jennifer Aniston) has a TV role so influenced tonsorial trends, and say that fans of all ages have been sporting the ‘Tommy Shelby Special’.

Whether he’s slashing someone or making love, Shelby is often smoking and, according to the props team, puffs through at least 3,000 cigarettes a series. They’re always herbal rose-flavoured, though, as, in real life, Murphy is a non-smoker. McCrory says the cast are left with bits of ‘black’ in their nostrils.

Even experienced cast members struggled to master the accents.

McCrory, an actress with one of the poshest, luvviest voices in the business, said she only cracked her Birmingham accent after watching ‘endless’ video clips of Black Sabbath singer Ozzy Osbourne.

Murphy conquered his during a ‘quite drunken Saturday’ with Knight in the Garrison pub (which features in the show).

Sam Neill, 71, who was born in Northern Ireland but moved to New Zealand when he was seven, enlisted the help of fellow actor friends James Nesbitt and Liam Neeson to perfect the Belfast growl of detective Chester Campbell. 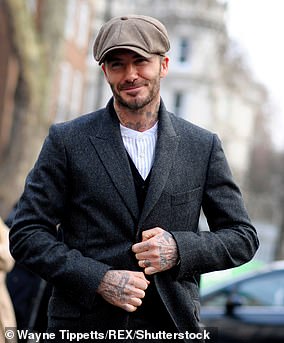 David Beckham and his sons have embraced the look and Becks’s co-owned label, Kent & Curwen, has a new collection in collaboration with the show

Even critics admit the show’s slick style is something to behold.

Episode after episode is replete with slow-motion shots, sharp scene cuts, a rock music soundtrack and enough pyrotechnics to rival a volcano — as well as the sharpest outfits on TV.

Men have have been snapping up baker boy caps and squeezing themselves into three-piece suits.

David Beckham and his sons have embraced the look and Becks’s co-owned label, Kent & Curwen, has a new collection in collaboration with the show — labelled The Garrison Tailors, in a nod to the Shelby family’s pub.

Scott Blower, a gardener from Sale, Greater Manchester, looks so like Tommy Shelby that fans (of both sexes) go crazy when they see him — even abroad.

‘I was getting mobbed,’ recalled Scott, 47. ‘Even on the plane people thought I was him. It was crazy.’

He has embraced the resemblance, with a job in a Peaky Blinders-themed bar, where he is paid to stroll about in full Twenties garb.

Even his girlfriend, Nicola Stones, admits she first fell for him when he was dressed as Tommy. 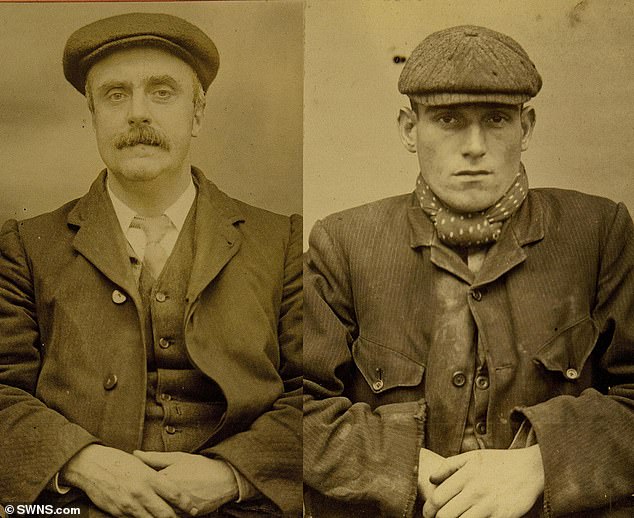 Two real-life Peaky Blinders are pictured above. Knight based the series on the gang that may or may not have terrorised Birmingham in 1919, when it was the world’s biggest industrial city. He was inspired by stories told to him by his father about his gangster uncles

There have been numerous Peaky Blinders-themed weddings, parties — and even funerals.

The aunt who puts Tommy in his place

The Peaky Blinders might spend their days hatching vicious schemes to quash their enemies, but underlining every Shelby plan lies a deep-seated conviction in the importance of family.

Everything Tommy does is to ensure that the Shelby family — who were once desperately impoverished nobodies — continue to wield influence.

While Tommy is off plotting in London, his aunt Polly Gray, (Helen McCrory) more than fills his boots.

Indeed, it often seems it’s the females of the Shelby clan who have the real power — with ‘Aunt Pol’ positioning herself as the family matriarch and Tommy’s sister Ada (Sophie Rundle) one of the few brave enough to stand up to him. 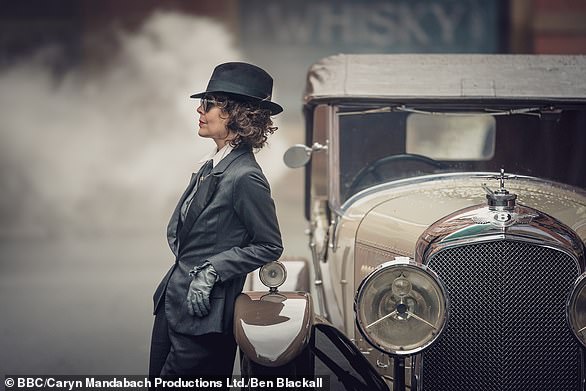 While Tommy is off plotting in London, his aunt Polly Gray, (Helen McCrory) more than fills his boots

David Bowie was a massive fan and once sent a photo of himself to Cillian with razor blades in his cap.

In response, the actor sent him a flat cap from the show and, in series three, in tribute to the late singer, Tommy appears in a hospital bed similar to that of Bowie’s music video Lazarus.

But Knight first pitched his idea to Channel 4 back in 2001, years beforehand.

Knight watches neither TV dramas nor films, so has never seen the Sky show, or any number of the other top shows to which Peaky Blinders has been compared, such as The Wire.

A book — entitled By Order Of The Peaky Blinders: The Official Companion To The Hit TV Series — will be available from October.

A movie, musical and even a ballet are also potential mooted future spin-off projects.

And, if all that wasn’t enough, Knight is now planning a 40-acre, £100 million film and television studio in the West Midlands.

Knight, who has written every episode of Peaky Blinders (and already penned series six and seven) says that the final series will end when the air raid sirens of World War II sound.

Star turns in Brum’s back streets 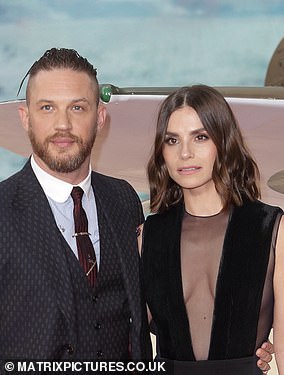