Helen Hunt, 56, of Mad About You fame flaunts her toned figure in a teeny bikini after a Boogie Board session in Malibu… after saying she does not diet

Helen Hunt has stayed in great shape thanks to her passion for exercise.

The actress – best known for her 1998 film As Good As It Gets that landed her an Academy Award as well as her TV show Mad About You which won her four Emmys –  flashed her flat tummy and sculpted legs when in a black string bikini on Sunday.

The 56-year-old beauty had taken her Boogie Board out along the coast of Malibu. The images were impressive and they looked as if they could have made the cover of Shape or Women’s Health magazine. 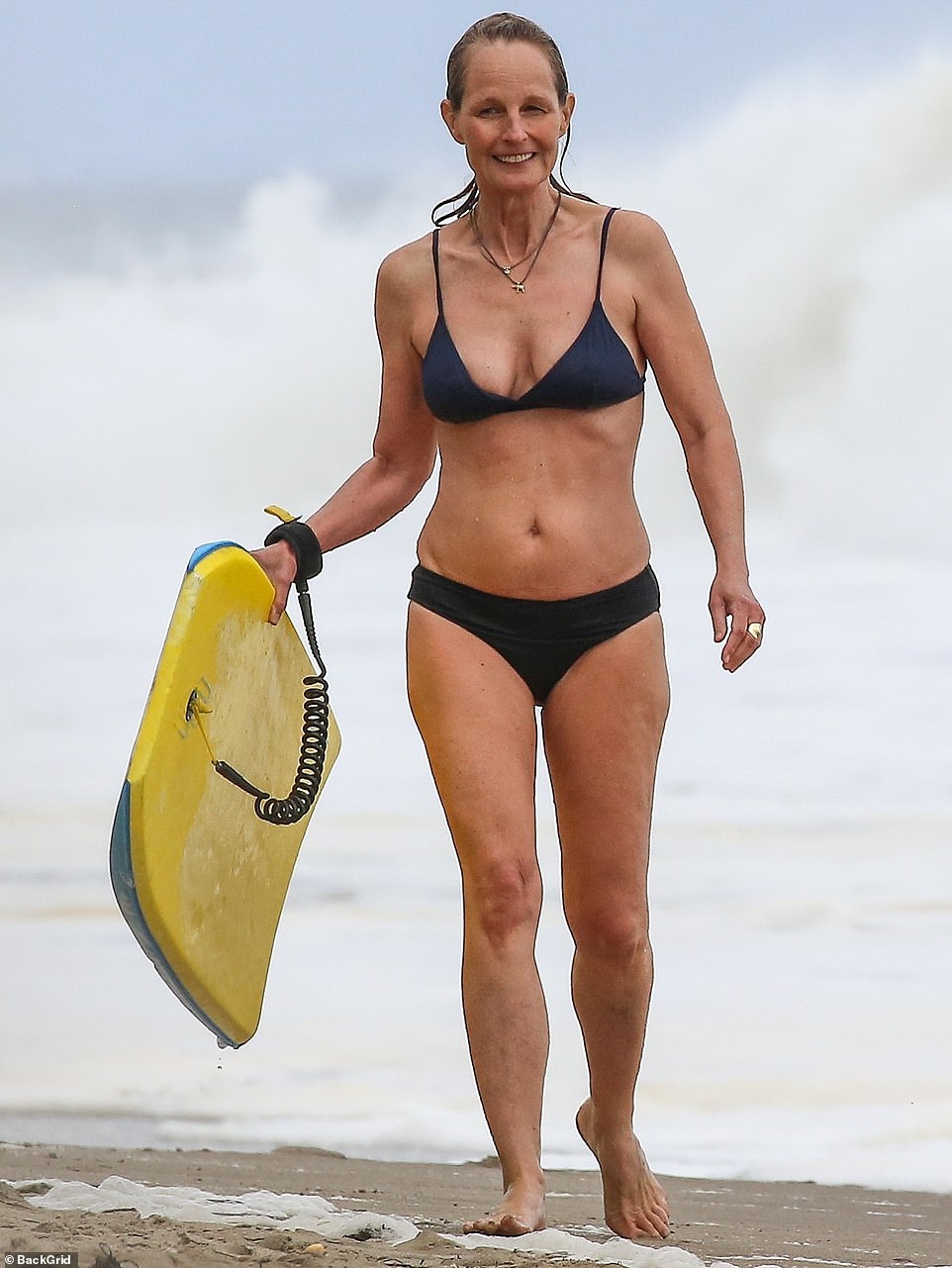 Looking great! Helen Hunt has stayed in great shape thanks to her passion for exercise. The Oscar-winning movie actress flashed her flat tummy and sculpted legs when in a black string bikini on Sunday

The former child actress – she was on everything from The Bionic Woman to The Facts Of Life – looked half her age as she had no fat on her body with toned arms, strong legs and a small waistline.

The beauty had on a triangle top with thin straps and briefs than rode down low. Hunt had on two necklaces and a large ring.

The glam was left at home as she went makeup free and had her hair nicely slicked back from the ocean water.

The siren, who has 16-year-old daughter Makena with director Matthew Carnahan, appeared to be alone as she walked up from the wet shoreline to the sandy beach looking like a Bond girl – think Ursula Andress as Honey Ryder in the 1962 film Dr No or Halle Berry as Jinx in 2002’s Die Another Day.

Helen has always kept in top shape. She told USA Today that it takes effort but she does not go overboard.  ‘I do eat well. I try to love my body,’ the star said. ‘That is what I tell my daughter. I say, “Love every bite of food. Love your body. We’re all going to be dead soon.” Actually I don’t say that last thing to her.’ 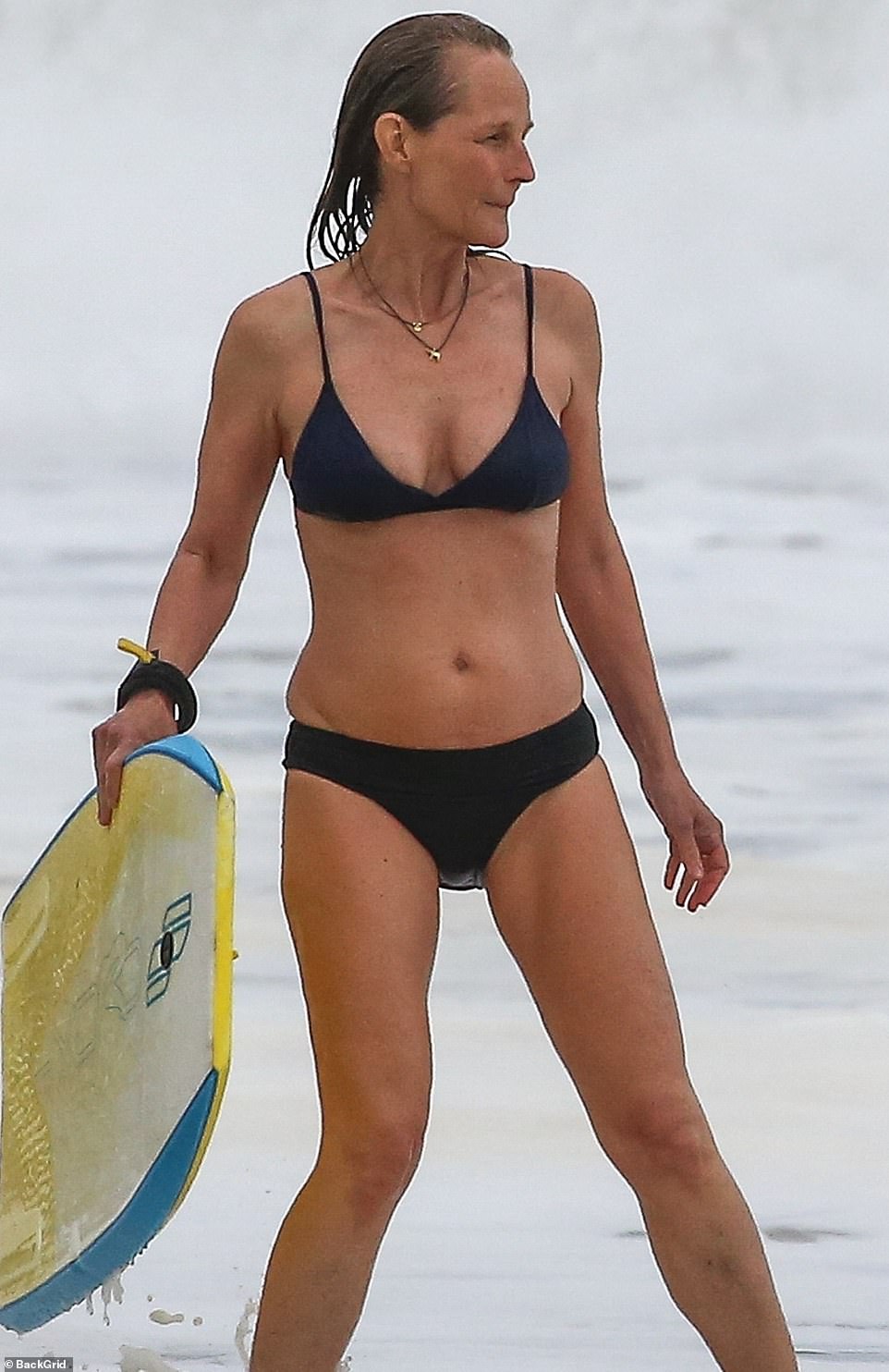 Surf’s up: The 56-year-old beauty had taken her Boogie Board out along the coast of Malibu 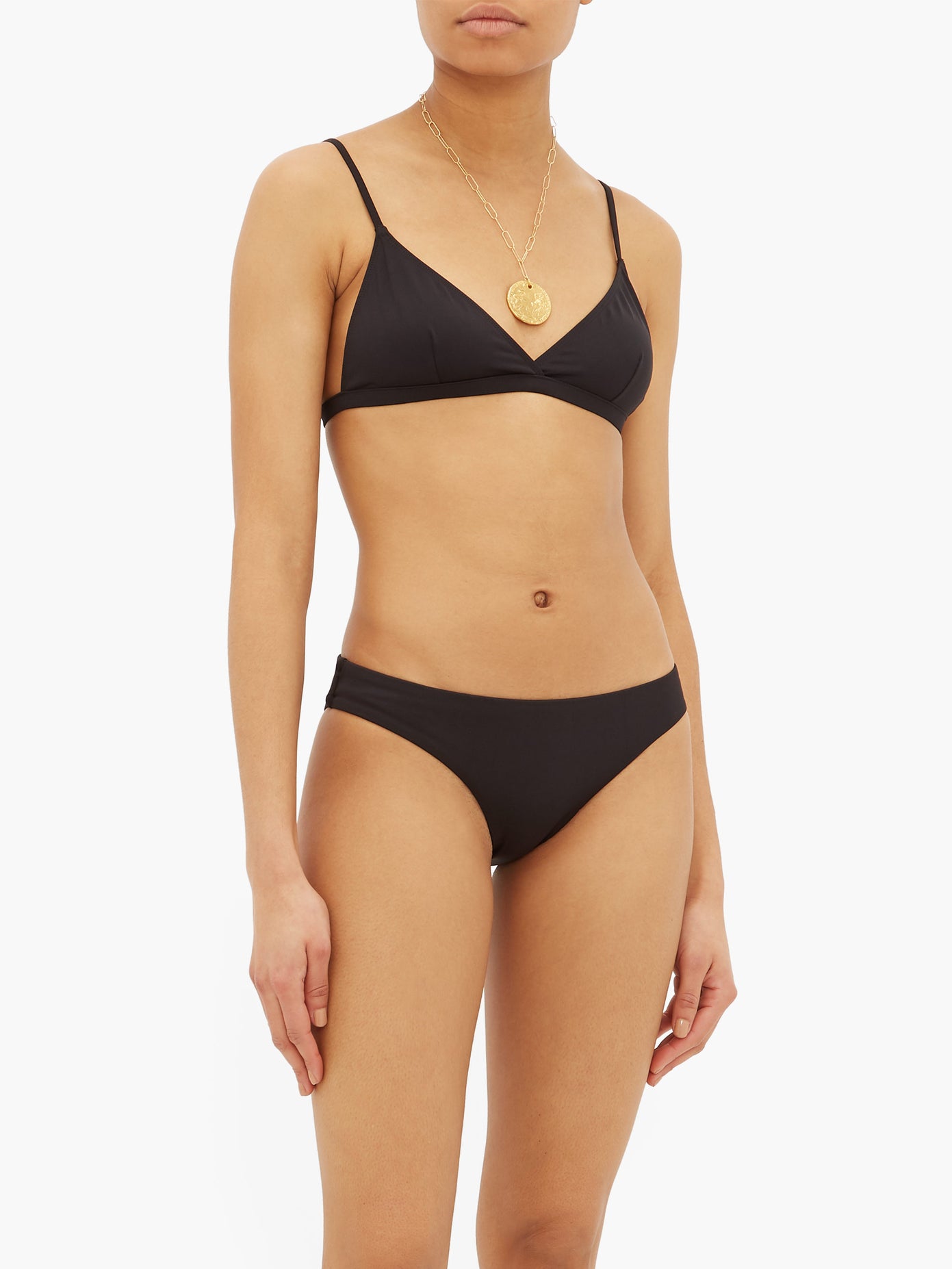 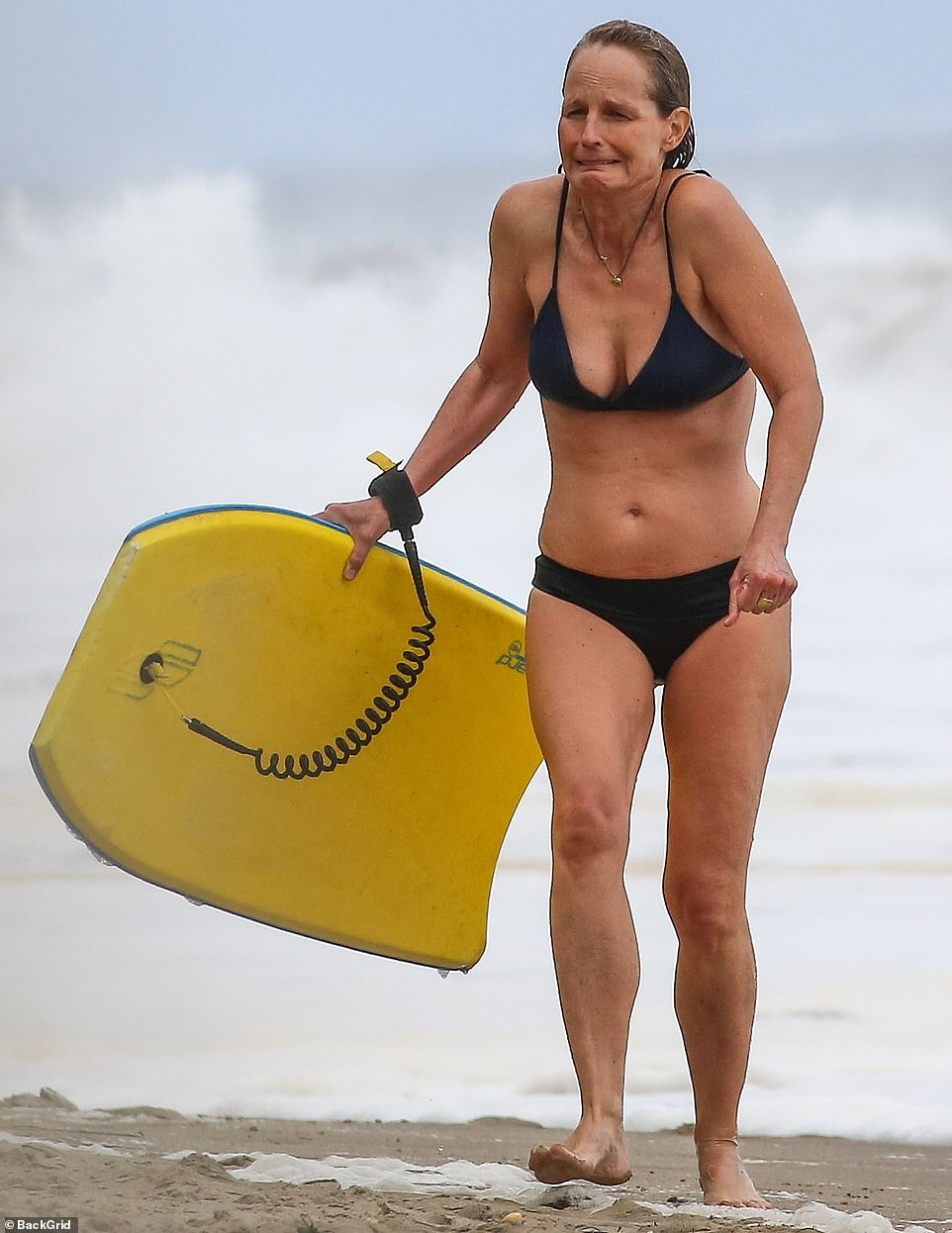 Ready for her closeup: The images were impressive and they looked as if they could have made the cover of Shape or Women’s Health magazine

And she told Healthy Living Magazine, ‘I don’t go to a gym ever. I don’t diet ever. I used to diet but sometime after the eighties, it made me miserable, but I do like to walk, run, and I do like to surf when I can just to warm it up, and I do enjoy doing yoga when I can get there.

‘It’s a religion for me to never diet. I think it makes you unhappy. It makes for unhappy things, so I just decided I would rather not have the perfect body, not have the body I want than diet.

‘And when I dropped the idea of dieting, my body went closer to the way that I was wanting it to be. So for me, it’s never worked.’

Hunt has an impressive resume. Her first job was in 1973’s Pioneer Woman where she played Sarah Sergeant. That was followed up by playing Jill Prentiss in the TV series Amy Prentiss. 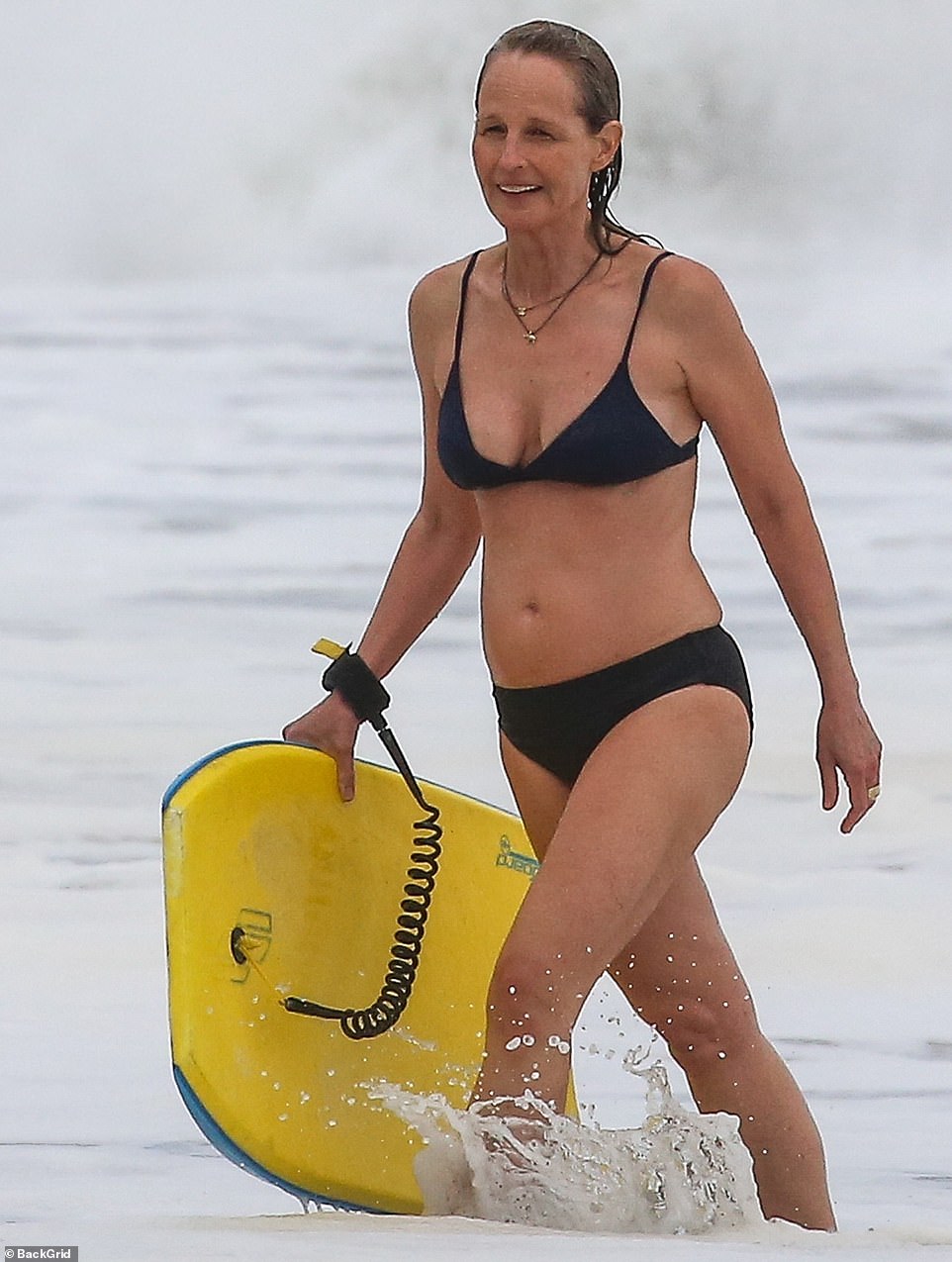 A picture of health: The former child actress – she was on everything from The Bionic Woman to The Facts Of Life – looked half her age as she had no fat on her body with toned arms, strong legs and a small waistline

Next came roles in Swiss Family Robinson, The Bionic Woman, The Fitzpatricks, The Facts Of Life, Knots Landing and It Takes Two.

In 1984 she won praise for playing Clancy Williams in the popular TV series St Elsewhere.

But she would not see mass fame until 1992 when she played Jamie Buchman in Mad About You, a series that lasted until 1999. 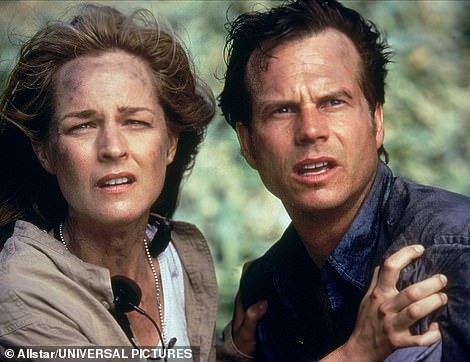 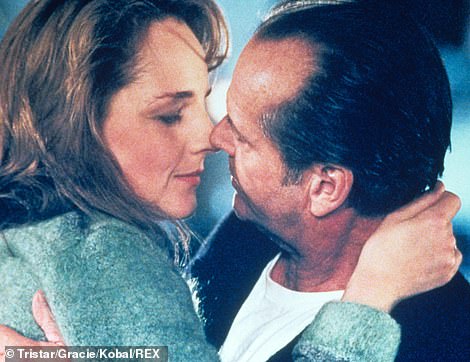 A wonderful movie career: The actress worked with Bill Paxton in the monster hit Twister in 1996, left, and received an Oscar for playing Jack Nicholson’s love interest in As Good As It Gets 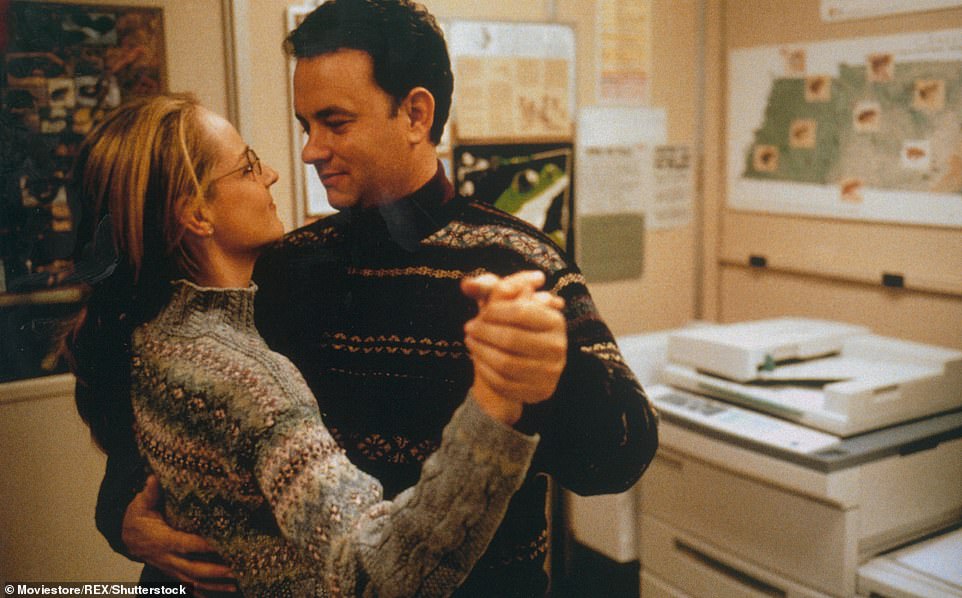 Another dynamo role for her: The blonde thespian played Tom Hanks’ longtime girlfriend in the 2000 film Castaway from director Robert Zemeckis

The series originally followed a couple of newlyweds (with Paul Reiser playing her husband) as they navigated their relationship and living in New York. 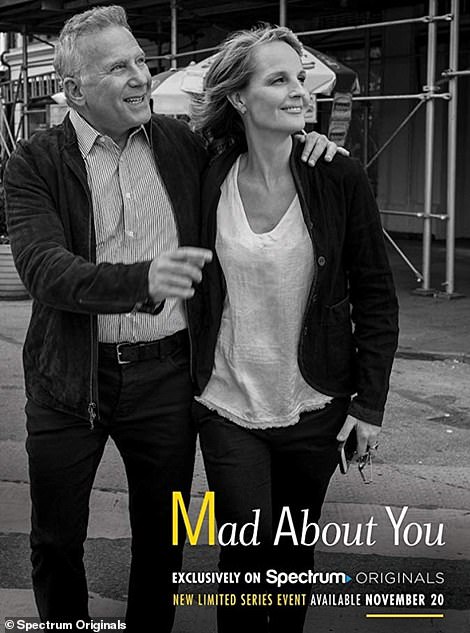 Going strong: The show confirms her chemistry with her co-star Paul, whom she’s had lunch with once a month since their show’s original finale

The new eighth season finds their relationship strained but still functioning 20 years later while their almost-grown daughter is leaving to attend nearby New York University.

The series, which originally aired on NBC, was picked up by Spectrum Originals for what is supposed to be a one-off limited series.

The show confirms her chemistry with her co-star Paul, with whom she has a strong relationship.

‘I have remained very, very close friends with Paul, she told People recently.

‘Reboot, or no reboot we have lunch once a month. We really enjoy and care for each other.’

Though she’s best known for her acting chops, Helen turned to directing in the last few seasons of Mad About You, and also received a story credit on multiple episodes.

After directing the original two-part series finale from 1999, she was once again behind the camera for the revival’s debut episode.

While starring on the series, she won the Oscar for Best Actress for 1997’s As Good As It Gets, which also earned Jack Nicholson his third Academy Award.

She also expanded from directing TV to making her feature film directorial debut with 2007’s Then She Found Me, followed by the 2014 film Ride. 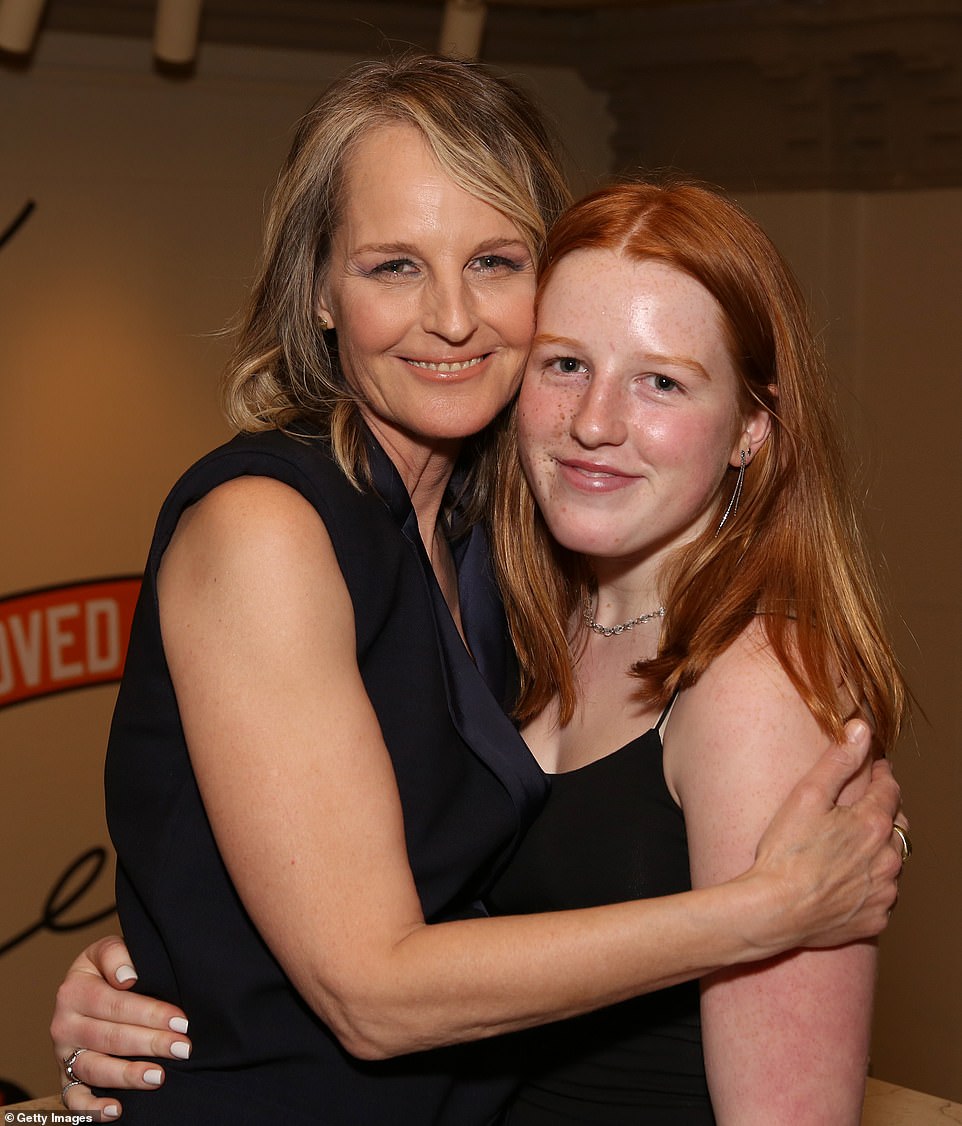