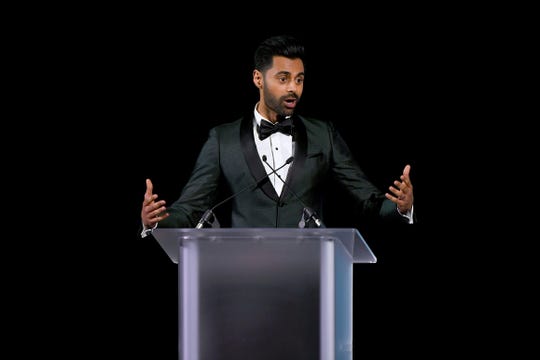 For a comedian, the perks of emceeing the CFDA Awards include bashing your least favorite fashion designers in front of an audience of their peers.

And while Hasan Minhaj’s routine at Monday night’s fashion honors was considerably more subdued than Issa Rae’s blistering set at the 2018 awards, where she flamed Kanye West for being “black only when it’s convenient,” the “Patriot Act” host managed to get a few digs in at Gucci and their history of cultural appropriation.

“It’s been an incredible year for fashion,” he said. “The entire industry, whose successes (have been linked) to bias, is becoming more inclusive and is pushing boundaries. Even if it sometimes puts white dudes in turbans. I’m looking at you, Gucci.”

Minhaj was referring to a $790 Gucci turban that appeared on the Italian fashion house’s website in May, earning slams of cultural appropriation. The item’s name was initially changed on Gucci’s website to “Indy Full Head Wrap” from “Indy Full Turban,” before the item disappeared from the site altogether.

“Is Gucci here tonight? No? Let’s talk about them,” Minhaj continued, before name-dropping the cult featured in Netflix’ “Wild Wild Country.” “I’m not sure if that was a runway show or if y’all just joined the Rajneeshees.”

The rest of the show unfolded without controversy, with Rick Owens and Brandon Maxwell taking home the night’s top awards — winning the best menswear and womenswear categories, respectively — with Jennifer Lopez honored with the night’s fashion icon award.

‘Hope Brad took that dress off!’ Jennifer Aniston fans go wild as she shares ‘morning after’ photo of her gown and heels on bathroom floor…