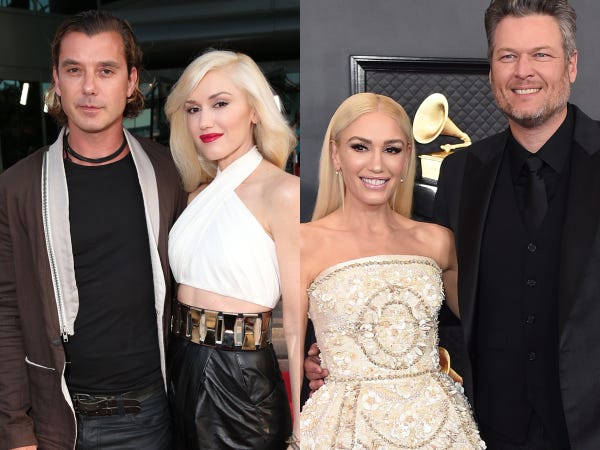 "#datenight @acmawards w my boo @blakeshelton," Stefani captioned a photo of herself standing next to Shelton, who was wearing a cowboy hat.

The "Sweet Escape" singer's caption was referencing the ACM Awards, which took place on Wednesday. During the awards ceremony, Stefani and Shelton performed their song "Happy Anywhere," which was released in July.

Fans were quick to point out that the image was an edited one.

The photo of Blake was actually taken at the 2003 CMA Awards, which he attended with then-girlfriend Kaynette Gern. The two got married in November 2003 and split in 2006.

Shelton recently posted a photo on Instagram from the aforementioned awards show, writing: "Y'all think I should bring back this look for the @acmawards? #Throwback."

Moreover, Stefani actually shared the same photo back in September 2014, except the person next to her was Rossdale. The throwback was posted on Instagram to commemorate their 12th anniversary.

Stefani and Rossdale got married in September 2002. They went on to welcome three kids together: sons Kingston (born in 2006), Zuma (born in 2008), and Apollo (born in 2014). The No Doubt singer filed for divorce in 2015 citing "irreconcilable differences." The divorce was finalized the following year.

Stefani and Shelton met on the set of "The Voice" in 2015, the same year that he and singer Miranda Lambert (who he wed in 2011) announced their divorce.

The "Voice" costars made their relationship red carpet official at a Vanity Fair Oscars party in February 2016. They went on to release music together and Shelton told Billboard that Stefani "saved his life," after his divorce from Lambert.