The death of the 97-year-old director, who was also a pioneer of focusing on increasing diversity in theatre, is confirmed by his assistant Nina Soufy with actor Adrian Lester leading tributes to him.

Over the years, Brook directed theatre royalty including Laurence Olivier, John Gielgud, Paul Scofield and Adrian Lester. He was also a pioneer of focusing on increasing diversity in theatre, saying in an interview with the Evening Standard in 2019 his casting method was “colour-rich” as opposed to “color-blind.”

Actor Lester led tributes, tweeting, “Sad news. The man was a giant in our field. Asking bold questions and rigorously refusing to settle for mediocrity.” The 53-year-old added, “His influence changed everything about western theatre, even the design of some of our buildings. RIP Peter. Rest well, sir.” 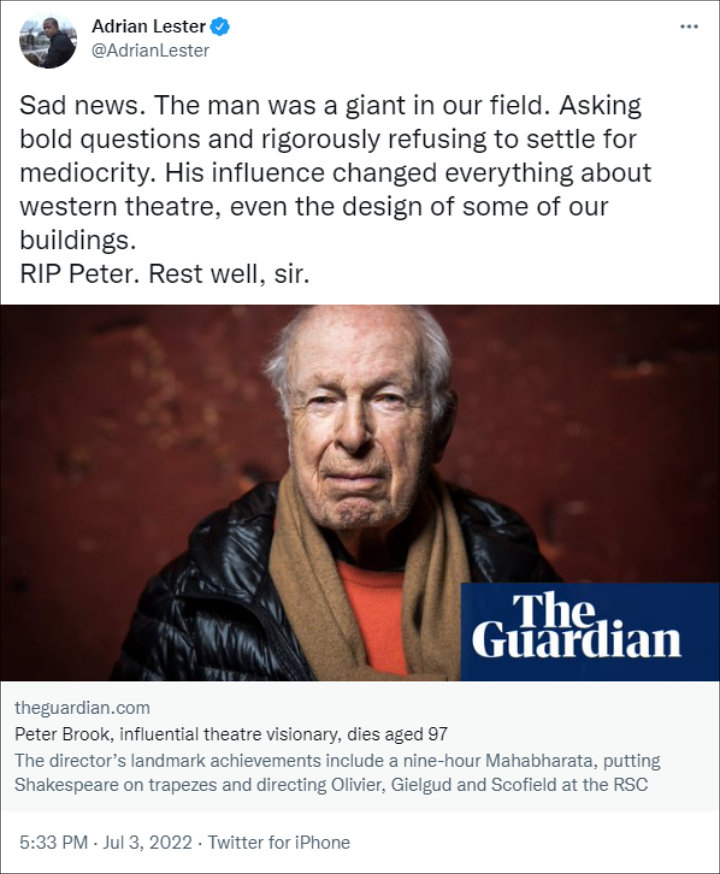 Brook’s publisher Nick Hern Books also shared the news. “All of us at NHB are very sad to hear of the death of legendary director Peter Brook, at the age of 97. We’re honoured to have been Peter’s publisher for the past 20 years, sharing his wisdom and insights with the world. He leaves behind an incredible artistic legacy. RIP,” he said.

Brook’s landmark 1970 RSC version of ‘A Midsummer Night’s Dream’, influenced by a Jerome Robbins ballet and the Peking Circus, was performed in a set consisting of a white cube and featured trapezes, stilts and a forest of steel wire.

The avant-garde pioneer redefined the way the world thought about stage drama, with his productions mounted from London and Paris to African villages, and one his sets famously designed by Salvador Dalí. Brook’s career started when he directed Dr Faustus in 1943 at the Torch Theatre, London.

He went on to become Director of Productions at the Royal Opera House in the capital, staging a controversial production of Richard Strauss’s ‘Salome’ there with sets by surrealist Dalí. Brook continued to direct and write in his later years and was awarded the prestigious Praemium Imperiale and Prix Italia, as well as being made a CBE in 1965 and a Companion of Honour in 1998.

Brook married actor Natasha Parry in 1951, who died in 2015 aged 84, and they had two children, Irina, now a director, and Simon, who works as a producer.